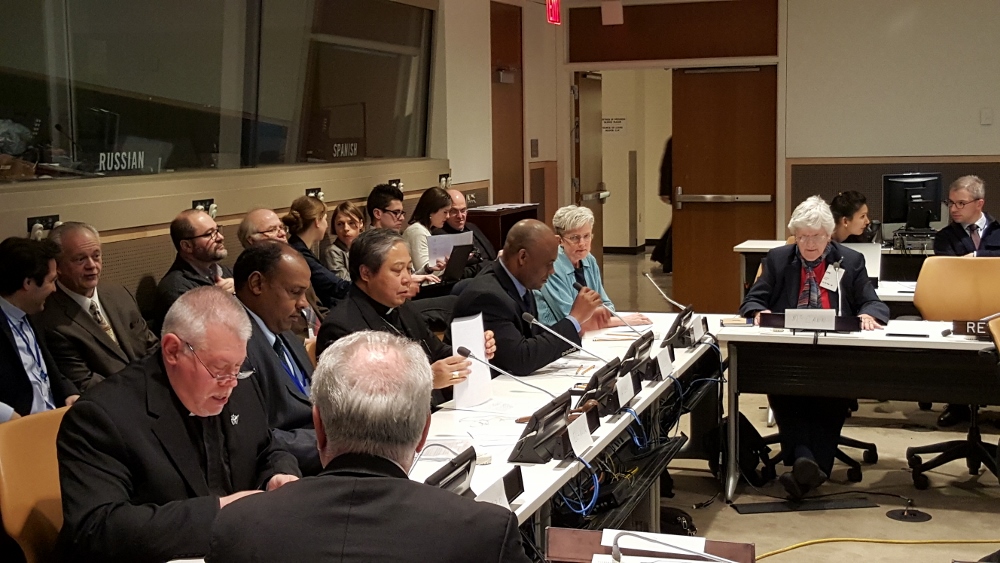 Speakers and participants at an April 12 event at the United Nations focusing on migration. (GSR photo / Chris Herlinger)

New York, N.Y. — As the world is grappling with historic numbers of refugees and asylum seekers from wars and natural disasters, with more than 50 million on the move or in camps, the most prominent global body is responding with renewed rigor.

On the ground, the United Nations' refugee agency, UNHCR is responding with humanitarian assistance in various flash points — among them: Afghanistan, Colombia, Democratic Republic of the Congo, Iraq, Pakistan, South Sudan and Syria. Similarly, the U.N.'s World Food Programme is providing food to displaced persons in areas affected by war and conflict.

But at the United Nations' headquarters in New York, refugee issues are now getting more attention. In part because of how the U.N. is structured, with UNHCR based in Geneva, migration issues generally have not taken center stage in New York, where debates have tended to focus on relations between nations and the broader, systematic ways to alleviate poverty.

Yet that is changing: The overwhelming numbers of migrants now globally is forcing the U.N. to address displacement in new ways and incorporate concerns about migration into its broader work.

"If we are not affected by what happens to our neighbor, then our work at the U.N. has no impact," Sr. Justine Gitanjali Senapati, who represents the Congregations of St. Joseph at the U.N., said in an interview with GSR. Senapati is also a member at large of the NGO Committee on Migration, an advisory and advocacy group of non-governmental organizations that includes more than a dozen religious congregations.

She was one of more than a dozen Catholic sisters attending a U.N. event April 12 hosted by the Holy See, the NGO Committee on Migration, and four religious congregations focusing on a number of themes related to global migration, including the ways migration relates to poverty and development, and the need for better data on global migration. It was attended by several dozen members of religious congregations and representatives of various non-governmental organizations.

While migration has always existed, it is becoming an increasingly "unprecedented phenomenon in our days," with numbers not seen since the end of World War II, said Archbishop Bernardito Auza, the Holy See's Permanent Observer to the United Nations. Auza called that "disturbing" because so much of current migration is "involuntary, caused by situations of conflict, violence, persecutions and discrimination, poverty and social exclusion, forcing people to flee their homes."

Adding to the misery, he said, "is that along the journey, migrants and refugees face the dangers of trafficking, abuses, and starvation, and when, upon arriving at their destination, rather than finding a safe haven, men, women, children, and even infants, face discrimination, racism, extreme nationalism, suspicion, mistrust and a lack of clear policies regulating their acceptance."

The recent refugee crisis in the Middle East — fueled by wars and conflict in Syria and Iraq — "has added to the surge of the number of migrants and refugees and also deepened the tension surrounding today's migration dynamics," said Fr. Emeka Xris Obiezu, the U.N. representative of the Augustinians International and who serves as the vice chair of the NGO Committee on Migration. 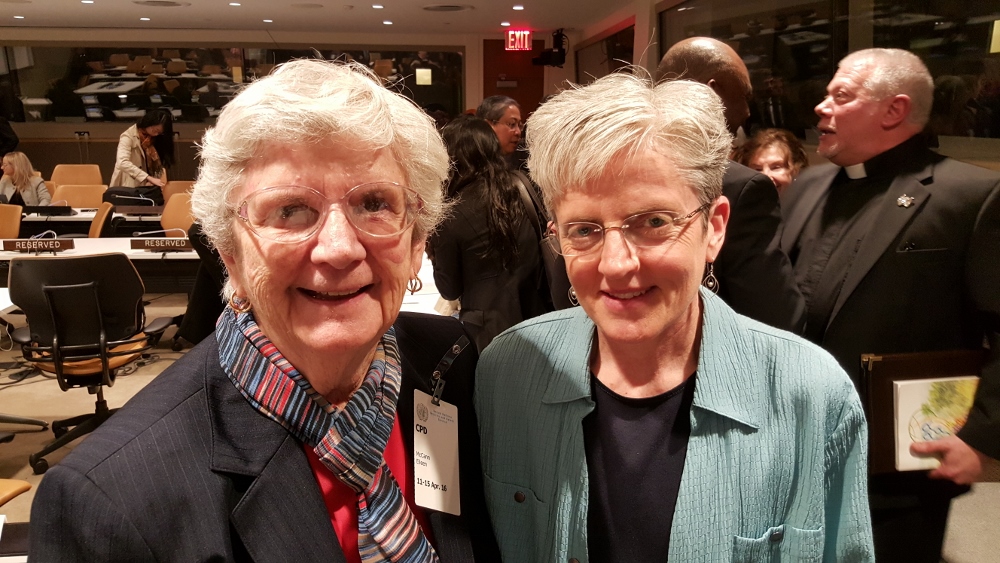 Citing data by the U.N.'s Department of Economic and Social Affairs, Obiezu noted at the April 12 event that migration as a whole now accounts for 244 million people including those who have had to leave areas within their own countries, with 3.5 percent of the population "now on the move," and with the annual growth rate reaching 2.3 percent. Global migration is "a significant driver of development," Obiezu said

Given these dynamics, it is not surprising that the U.N.'s broad agenda to reduce poverty and promote peace over the next 14 years — called the 2030 Agenda — recognized the importance of migration issues and challenges. The centerpiece of the 2030 Agenda, promotion of the so-called Sustainable Development Goals, has pledged "leave no one behind," said Auza, "which most certainly includes the hopes and needs of the vulnerable and the abandon, and surely the tens of millions of migrants, refugees, and internally displaced persons in our world today."

There are massive challenges involved in incorporating the needs of the displaced into the U.N.'s development agenda – one of them being the need for better data about those living on the margins.

What is known is troubling enough. One example: In the past 16 years, the number of migrant workers in Canada has increased to 338,000 from 90,000, but Canadian laws still do not adequately protect such workers, said Sr. Sue Wilson, director of the Federation of the Sisters of St. Joseph of Canada's Office for Systematic Justice, who spoke at the U.N. meeting.

That, she said, stems from a business model in which workers are "invisibly exploited" and are being "pushed" into invisibility as part of a "throwaway workforce." What Wilson called "a human rights" approach to protect migrant workers would greatly help but that will probably only happen if there is outside pressure to stiffen laws. "We have to look at the systems that are pushing people to the margins of invisibility."

Sounding a similar note, Sr. Eileen McCann, a member of the Brentwood Sisters of St. Joseph and an attorney representing immigrants in New York City, noted the difficulty people who are not documented have in reporting abuse and crime — numbers that, in her home borough of Brooklyn, are astonishingly high. (There are believed to be more than 300,000 undocumented workers in New York City.) "My neighbors are, by and large, undocumented immigrants," McCann said, adding that, in an era of global connectivity "the idea of being 'undocumented' itself is an anachronism."

To Sr. Senapati, it is important that some of these barriers begin to break down as she understands the issue also from personal experience. She and her family had to flee their home in India's Odisha state in during a wave of anti-Christian violence in 2007 and 2008.

"I understand what it is to be homeless," she said. "It's not just intellectual, it's personal." Like thousands of others, the home of Senapati's family was leveled and they had to flee — for a time, the family was displaced, living in a tent. "I realized it was my call as a sister — that was very clear to me, I am a sister for dislocated people."

Like other sisters working at the U.N., she feels her work is to connect the seemingly large and impersonal UN system to those she and others know well – those at the grass-roots, struggling in their lives. "I see myself as a connector."

Senapati knows that people, particularly those who are displaced, can look at the U.N. and feel frustrated, even angry, that the "U.N. isn't doing enough."

Yet she does feel that the U.N.'s affirmation of migrant issues and the fact that 193 member states have signed onto the 2030 agenda do offer the world hope. Events like the April 12 meeting are a way to highlight issues and challenges facing the world today. "People dislike the U.N. system," Senapati said, "and yet it's still the best single hope the global family has."