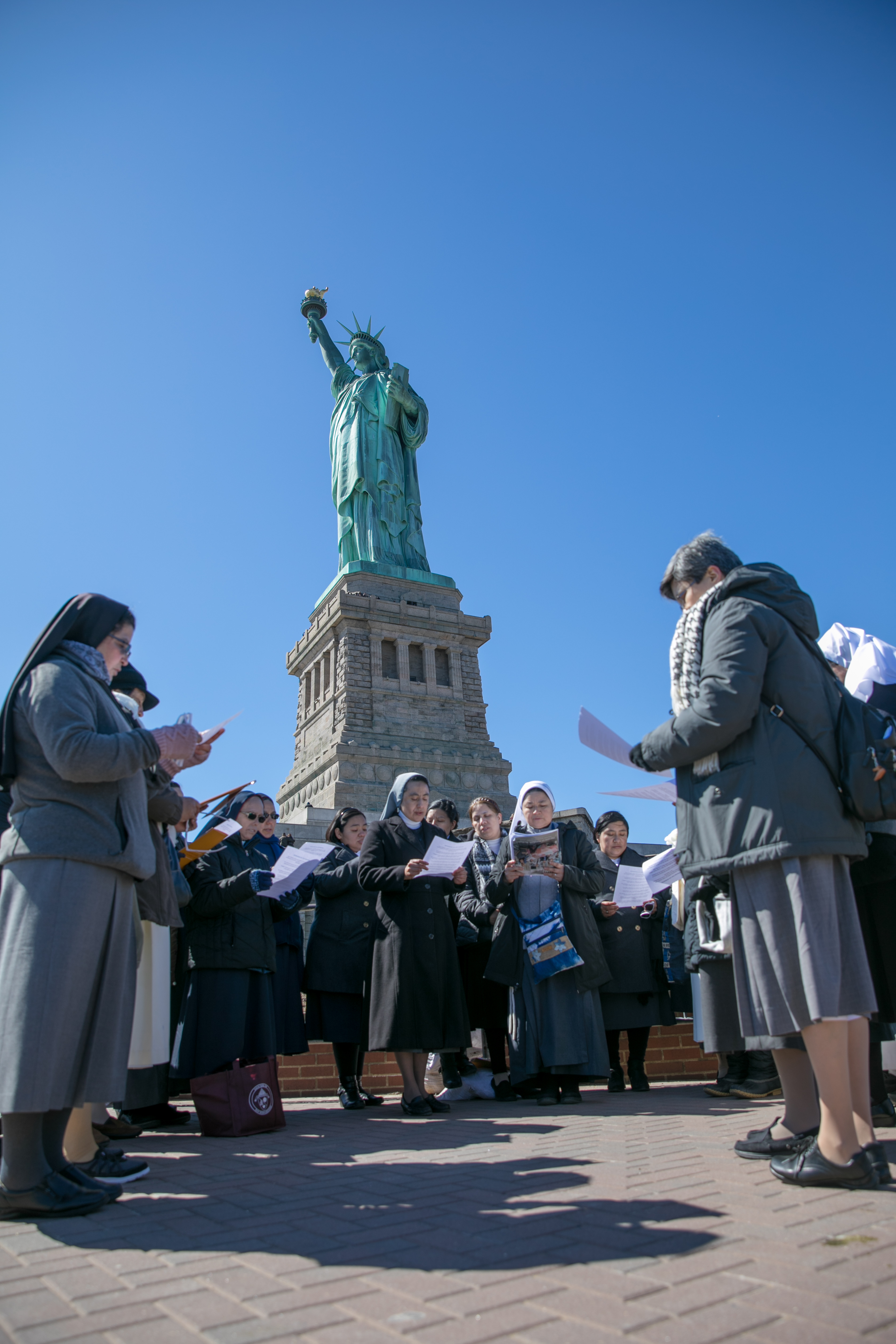 At the feet of the Statue of Liberty, missionary sisters pray for the tens of thousands of immigrants they collectively serve throughout the United States as part of the U.S.-Latin American Sisters Exchange Program hosted by Catholic Extension. (CNS/Catholic Extension)

Chicago, Illinois — A trip to the Big Apple and stops at some of the city's most significant historical sites, such as the Statue of Liberty, helped a group of missionary sisters currently serving immigrants in the United States gain a deeper appreciation of the struggles of the nation and its people.

The initiative provides funding for religious sisters from Latin America to live and study in the U.S. for five years, while they minister to underserved communities of immigrants in poor and rural U.S. dioceses. The group convened in New York as part of the sisters' ongoing cultural and academic training in the U.S.

Based in Chicago, Catholic Extension raises and distributes funds to support U.S. mission dioceses, many of which are rural, cover a large geographic area, and have limited personnel and pastoral resources.

After a brief visit with New York Cardinal Timothy Dolan at St. Patrick's Cathedral, the sisters began their educational tour with an excursion to the Statue of Liberty.

The women, who serve today's new waves of American immigrants, could easily identify with the monument's famous inscription beckoning the "tired, poor and huddled masses' of the world 'yearning to breathe free."

At the feet of Lady Liberty, the sisters offered a prayer on behalf of the tens of thousands of immigrants they collectively serve throughout the nation.

"Oh Jesus," they prayed in one voice, "bless the immigrants. Keep them close to your heart." At the end they learned to chant "USA! USA! USA!" to the delight of the other tourists passing by.

Then it was on to the Ellis Island Museum, the once-bustling port of entry for ships that brought 12 million immigrants to America in the late 19th and early 20th centuries. Several sisters seemed captivated by one exhibit in particular that showcased the history of anti-immigrant sentiment spearheaded by the Know-Nothing Party.

They closely studied an old political cartoon of the pope, depicted with a drawn sword invading the shores of America to apparently impose Catholicism and destroy the country's beliefs and way of life. The image captured the resentment that many Catholic immigrants from Europe faced when they arrived in America.

The sisters are witnessing firsthand the same fear of the stranger that directly impacts the communities of immigrants they serve.

"I have seen how people from many places across the world have come here to better their lives, but who were faced with great challenges when they came here," Sister Isabel Donate Valdez told Extension magazine. She serves farmworkers in central Washington state.

Despite periodic flare-ups of nativist fear, the sisters commented how this nation's ideals of inclusion and unity amid such diversity have prevailed throughout our history.

"We are all brothers and sisters no matter our race or color, and what is most important is that we live in unity with one another," said Sister Maria de la Luz Solis Lara, who works with indigenous Mexican immigrants in California's Salinas Valley.

She said her trip to New York allowed her to appreciate that no matter what walk of life we come from, "all people can know God and experience his love."

The sisters also visited the 9/11 memorial. Together they offered a soft-spoken prayer for all the innocent people and heroes who lost their lives in the 2001 terrorist attacks and for all the families that mourn them.

Sister Yelitza Ayala, who serves families in rural east Texas, led the prayer, asking God to allow "peace to reign in our hearts and in our souls and in the whole world."

Afterward, she reflected on the experience of visiting such sacred ground.

"To come here is a blessing," she said. "To pray for these people, to pray for this country which welcomes people from every part of the world. This place is a memorial of how people can be together -- serving, loving, sharing in peace, no matter what color of your face, no matter what your eyes look like, you are part of the one human race, you were created by God to love and serve.

"To see people walking in silence and praying, it gives hope to all, especially for us, the sisters, who love and pray for people, for souls," she said. "We give you thanks for bringing us here."

The sisters, now in their fourth year of the Catholic Extension exchange program, said that to be successful missionaries, their fundamental task is to fall in love with the people and the country they have been called to serve.

As a symbol of their love of their host country, the sisters marched to the heart of Time's Square and unfurled an American flag, snapping photos to their respective motherhouses throughout Latin America.

"After visiting so many beautiful places today," Donate Valdez said on the bus ride home, "I can see that the beauty we beheld is simply a reflection of the beauty that exists in the heart of humankind, which makes us capable of building such great structures and places."