Responding to an increase of unaccompanied minors arriving at the southern border, the federal government selected three temporary shelters in December to house immigrant children. Officials hope this will avoid the problems encountered in 2014 when an immigration surge overwhelmed border agents and left children stranded at Border Patrol facilities for days.

Two shelters are in Rockwall and Ellis counties near Dallas, while a third is in California's Ventura County outside Los Angeles. All three facilities offer summer camps for children and facilities for religious groups to gather throughout the year. The two camps in Texas are Christian-based while the one in California is Jewish.

During the past two months, 10,588 unaccompanied minors were apprehended at the border, compared to 5,129 at the same time in 2014, according to Border Patrol statistics. The Border Patrol cannot legally hold the minors for more than 72 hours before releasing them to the custody of Health and Human Services. Eventually the children are released when HHS believes it has found an appropriate sponsor, such as a parent or close relative. However, because the process takes time, the department is under pressure to have a constant supply of beds available.

That lack of bed space last summer left many unaccompanied minors stuck at Border Patrol facilities longer than the 72-hour limit. Images of children sleeping on crowded floors or huddled under aluminum blankets dominated news reports, leading to criticisms of the Obama administration's handling of the crisis. This year, the department was trying to stay ahead of the demand by increasing the number of beds from 7,900 to 8,400 beds in November.

"The kids in border patrol stations crammed into offices, little bitty kids with older kids; it's just not the right kind of conditions to keep kids in," said Eddie Walker, the founder and director of the Sabine Creek Ranch, a private Christian camp that will host the children in Rockwall County, Texas.

It was those images that moved him to email the Border Patrol last year and offer his camp as a place to house them. Inspired by the Bible passage Matthew 25, the former minister quoted Jesus who praised those who welcome the stranger. "'If you've done it for the least of them, you did it to me.'"

While he was not contacted a year ago, he got the call last week and will receive children on Friday.

"We had a week's notice," Walker said, but added that the news media found out first. "It was kind of interesting. We had helicopters flying over and news reporters at our gate."

Currently HHS runs a network of shelters of varying sizes in 12 states, most within 250 miles of the border. The two camps in Texas will provide 1,000 beds combined, while the camp in California will hold 400.

If the Texas shelters are not kept open past 21 days, they are considered temporary and do not have to be licensed, said Bryan Black, the chief press officer for the state's Health and Human Services Commission. At the federal level, HHS confirmed that the department did not intend to use the shelters past that time frame. If additional temporary shelters are needed, HHS will turn to other facilities.

A spokesperson said all three facilities will be paid for housing the children through a grant with BCFS Health and Human Services, a nonprofit that partners with HHS to provide services and care for the minors.

"The government and the people they work with have done an incredible job," said Rick DuBose, superintendent of the North Texas District of the Assemblies of God. The council owns the Lakeview Camp and Retreat Center in Ellis County, which is currently housing the first wave of children. "These people know what they're doing, and they're well organized."

Sr. Norma Pimentel, the executive director of Catholic Charities of the Rio Grande Valley, believes housing children at the camps was "a good step in the right direction," better than keeping them in the Border Patrol's frigid holding cells, dubbed the hieleras (ice boxes) where "children are not attended to correctly."

Not everyone in the community, though, shared Pimentel's sentiments. Walker quoted one angry call he received from an Ohio resident: "They were saying, 'This is the worst kind of treason . . . that you would take these kids and they are not here legally.'"

But, Walker added, around 95 to 98 percent of the calls were positive, from churches and individuals wanting to help.

At Lakeview Camp, DuBose said he received a mixed reaction from a community concerned that terrorists will take advantage of an open border or that narco-traffickers will use the kids to get drugs through. However, even though he understood the concerns, DuBose believed God had entrusted his staff with this responsibility.

"It's not about making somebody happy; it's about pleasing the Lord to the best of our ability," DuBose said. "We've received calls and emails and responses from all over saying, 'Thank you for what you're doing and for taking the heat on this, it's the right thing to do.'"

An HHS spokesperson planned to give elected officials a tour of Lakeview Camp Monday but would not give out the names of those on the tour. The office of U.S. Rep. Joe Barton, a Republican representing Ellis County, confirmed that he was on the tour.

Citing concerns for the safety of his constituents, Barton posted a statement Thursday outlining his opposition on the relocation of unaccompanied minors to his district.

"I have vigorously protested this action," Barton said. "Yesterday I spoke to Secretary of HHS, her senior staff, and other congressional and state leaders to express my concerns and attempt to prevent the transfer. Unfortunately, under current state and federal law, this specific action cannot be stopped."

Barton said he planned to monitor the situation closely and vowed to "prevent a reoccurrence and change the law."

But Pimentel offered a different perspective. "I think it's important not to forget why the children are coming," she said citing the gang violence in their country.

She called for the public to give the children due process and "listen to their cause before we act too hastily to deport them." 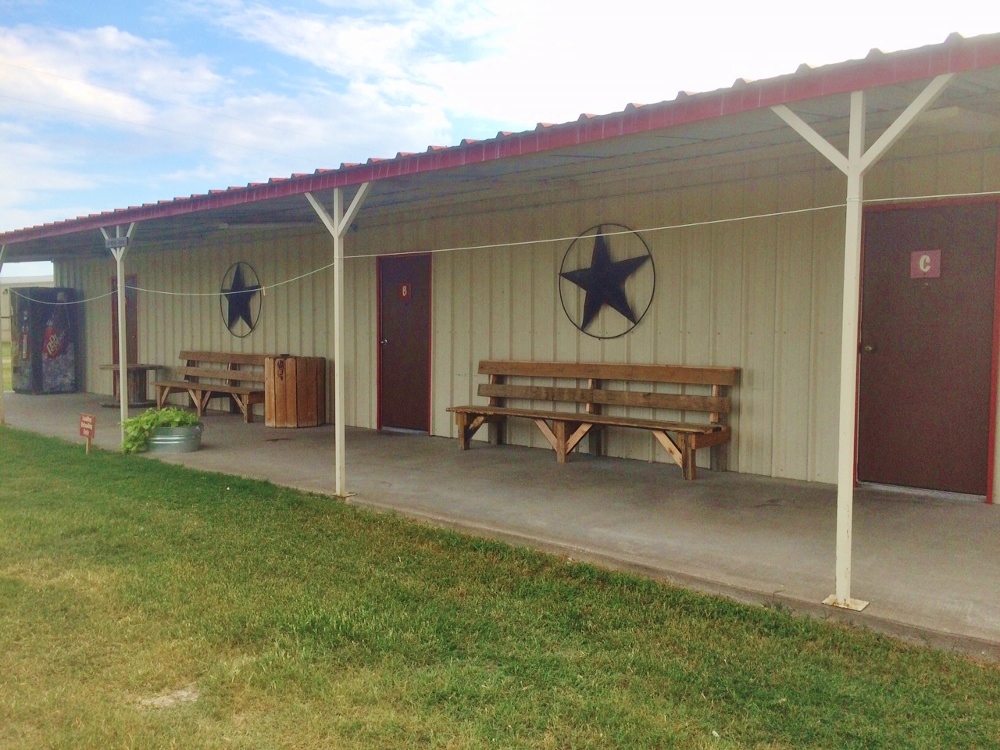