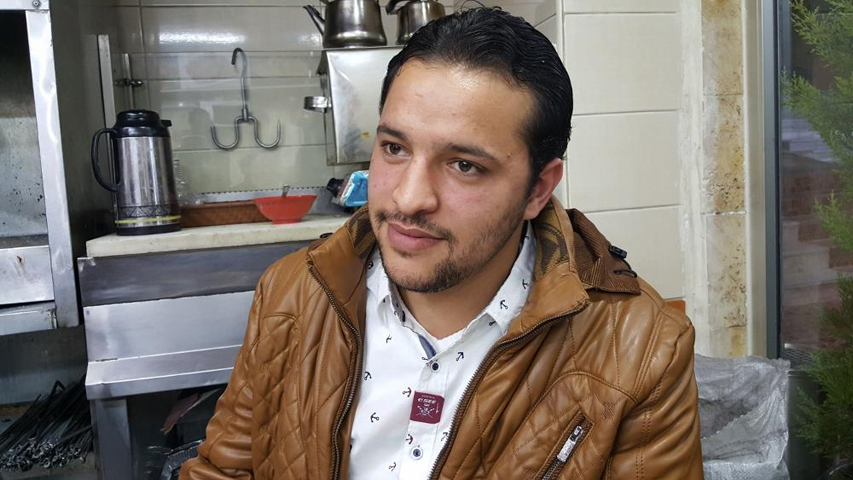 Mohammad Rostom, 23, in the small restaurant in Amman, Jordan, where some of his relatives work. They are all originally from Syria. (GSR photo / Chris Herlinger)

Amman, Jordan — Mohammad Rostom first heard the news about the recent Brussels suicide bombings at the small, cramped restaurant where a number of his brothers and cousins work in Amman, Jordan.

As one of his cousins carefully sliced a side of lamb broiling over a spit, Rostom took in the news about the March 22 incident and shook his head in frustration.

"It makes it more difficult for us Syrians," said the 23-year-old Syrian refugee. "People will say, 'It was done by Syrians. Syrian people were the reason for the bombing.' It isn't good."

The suspects in the bombing were not Syrian; they were born in Belgium and had family ties to Morocco. But to Rostom and to other Syrian refugees living in Jordan — nearly 1 million in all — even the slightest perception of a problem was another challenge as they try to fashion new lives outside their home country.

The hurdles are all inter-connected. There is the trauma that comes with the experience of war, then the day-to-day difficulties of work — Syrians generally are part of the "underground" economy as underpaid workers. And always present is the continued uncertainty of place: Do they return to Syria (some want to, many do not), try to go to the West, or remain in Jordan?

Certainly, the refugees are relieved to be out of harm's way. The streets and byways of hilly Amman are far safer than the major cities of Syria right now. Though there are substantial blocs of refugees living in camps, like the 80,000 living in the Zaatari refugee camp about an hour's drive northeast of Amman, most of the refugees from Syria and Iraq who have fled to Jordan now live in urban areas.

On the surface, life in Jordan has its daily rhythms that are free from the catastrophes of war. Rostom, a one-time physics student at Tishreen University and former resident of the Damascus suburb of Hamora who now makes a living as a baker — or "bread-maker," as he calls it — is an outgoing, friendly young man who enjoys practicing his English with visitors.

But he grows quiet and introspective as he recalls the events that caused him and other family members to leave Syria in September 2013: Air attacks near the family home that killed one brother and left another permanently injured.

A grandfather was also killed by members of the Syrian army, as was a cousin. Rostom, who describes his family as "apolitical," experienced problems from the opposition military forces as well.

Another reason to leave: The use of chemical weapons by Syrian forces in nearby cities. "After two days of that, I said, 'That is enough," Rostom recalled.

"Those were hard days," he said recently as a cousin served customers plates of grilled sausages, hummus and pita bread. "I worked very hard just to eat."

Rostom was not the first member of his family to enter Jordan: his father had earlier taken 15-year-old Ibrahim, the injured brother, by car to a hospital in Amman. Though Ibrahim now must cope with the use of a prosthetic leg and is paralyzed in his right arm, he exudes a kind of quiet and determined optimism, saying he wants to be a doctor when he is older and hopes to "walk and play" as he used to.

The family is waiting to hear about the possibility of going to the United States — perhaps so that Ibrahim can continue his physical therapy. But the application is a long and difficult process. "Maybe the U.S. will accept us," Rostom said. "But no one can know what we will be doing next year, or even these next days. We are just looking for a better life." 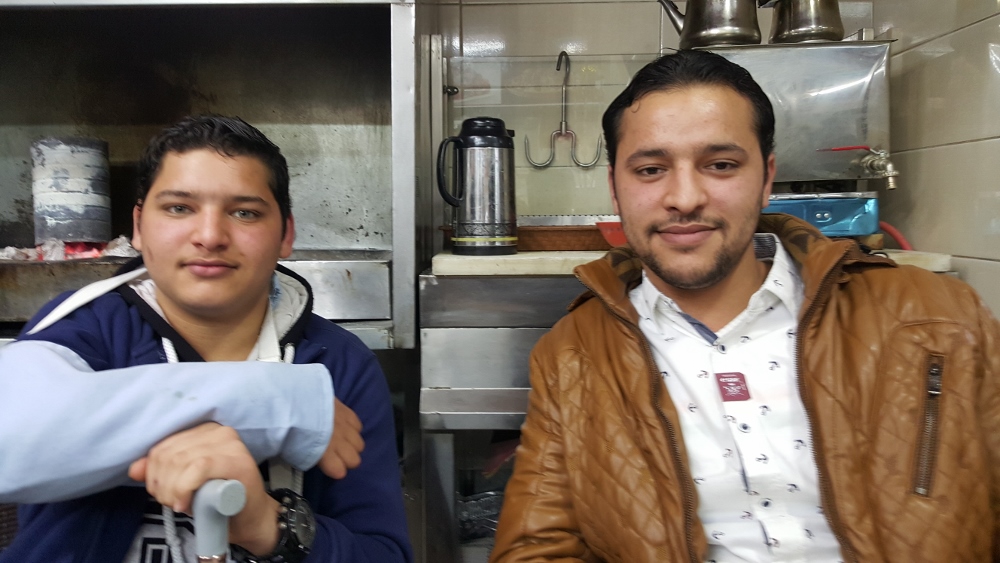 A constant sense of being in limbo is common to refugees in Jordan, whether from Syria or Iraq, whether Muslim or Christian. In an environment where national and religious identity mean much more now than in their former lives, living with uncertainty is the one common experience the refugees share.

"The future is not clear," said Sr. Nesreen Dababneh, a clinical psychologist who works at a Caritas clinic in the Al-Hashmi neighborhood of Amman. And yet despite the huge hurdles refugees face in the "externals" — how to settle in a new place and find work in a country where legal employment is still a challenge — Dababneh believes the way to "internal security" is often the most difficult task.

"How to reconstruct security inside is in some ways even more challenging than reconstructing on what is on the outside," she said.

When people have "left everything at once," like Rostom did, "you start to mistrust others," Dababneh said. "When people are forced to leave an insecure environment, people have to ask, 'How can I trust you?'"

Religious faith can sustain people through a difficult passage — though not always. Some find solace in what they do have, others are angry about not having jobs, of leaving behind an old life, of feeling there is no justice, perhaps cosmic justice, in their lives.

"I don't have the answer about anger," Dababneh said. "Some are angry; some are not." 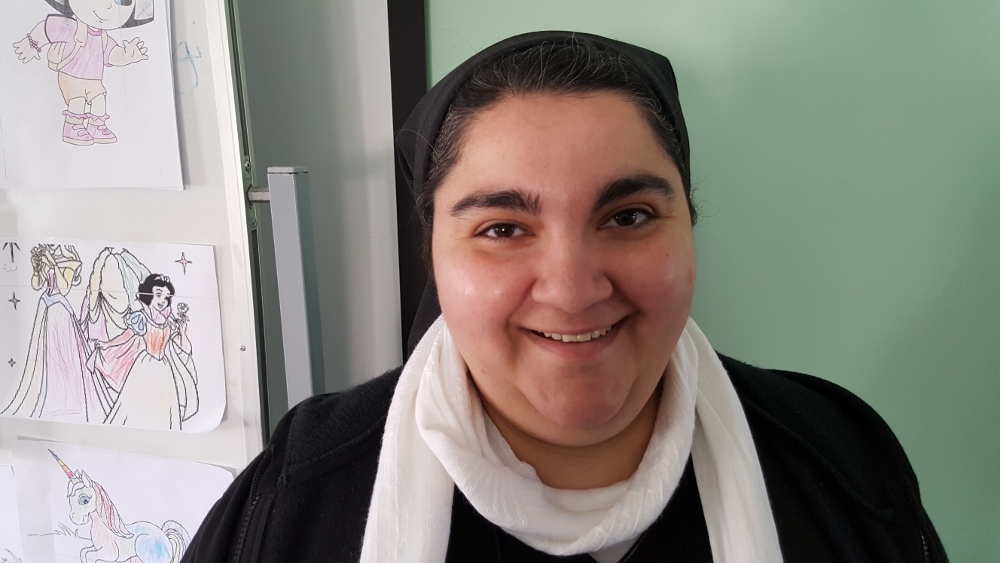 Sr. Nesreen Dababneh is a clinical psychologist who works at a Caritas clinic in the Al-Hashmi neighborhood of Amman. (GSR photo / Chris Herlinger) 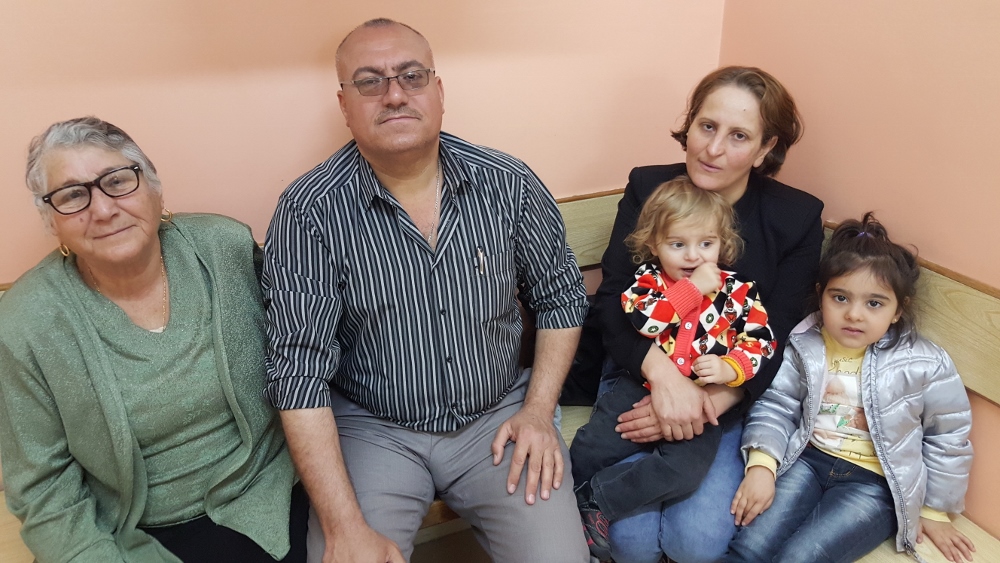 The family of Fauaz and May Marbena (to Fauaz's left) recently arrived in Jordan from Iraq. They are pictured at a clinic run by Dominican Sisters in the town of Zarqa. (GSR photo / Chris Herlinger)

It was not hard to mistake the anger, or at least the frustration, one family felt. At a clinic run by Dominican Sisters in the town of Zarqa, a wind-swept hamlet northeast of the capital of Amman, the family of Fauaz and May Marbena — only in Jordan a month since arriving from Iraq — were not sure what Easter would bring.

Like other Christians in Jordan who had fled Iraq following threats by ISIS, they plan to celebrate on May 1, the Orthodox Easter observance. But they said they had little, really, to celebrate.

"We will have no feast," said May Marbena. "We are far from home. What peace is there?"

"We left everything: our home, money," she added. "There is no safe place in Iraq now. We lost the feeling of safety in Iraq."

Sr. Maryan Kame, who, like the other sisters at the clinic is Iraqi, says she takes heart from the central Easter message of hope and of new possibilities. Yet the uncertainty refugees face over money, employment and housing takes a toll.

The clinic staff — eight employees in all, including three sisters, a Palestinian doctor and several support workers — constantly feel the pressure of sheer numbers: Up to 90 people daily come to the small but well-equipped clinic, located on a quiet Zarqa side street.

"People complain about headaches, chest pains, and we do the tests and there is nothing. There is simply a lot of anxiety." He paused, shaking his head. "More than 10 years of this: War and killing, war and killing."

The aftermath affects everyone, but women face particular hurdles.

Already experiencing what Dababneh calls the challenges faced by many Arab women in general, like "structural inequality, differences based on gender roles and domestic violence," women's problems are exacerbated by "the challenges of a new environment, lack of resources, high level of stress and trauma," she said. 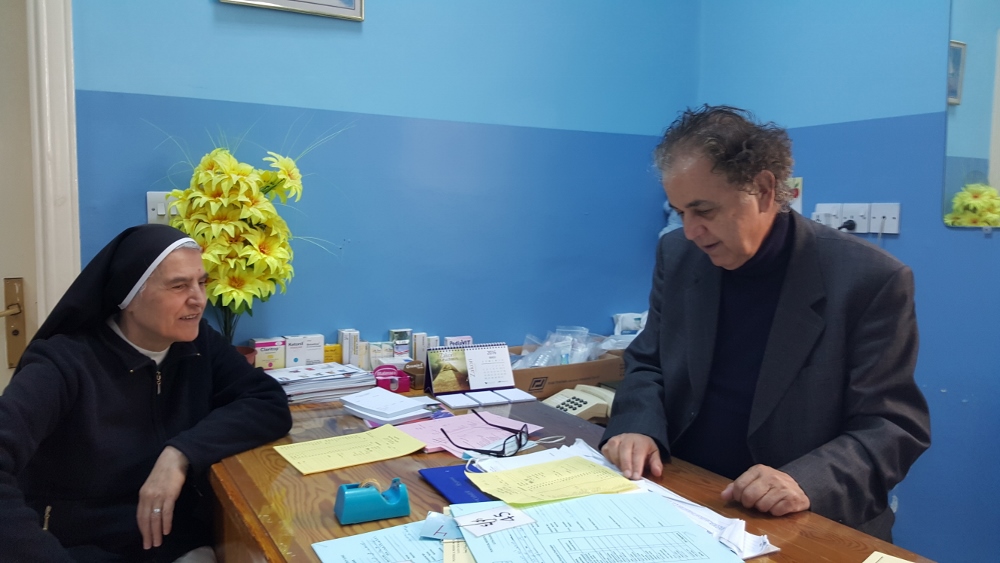 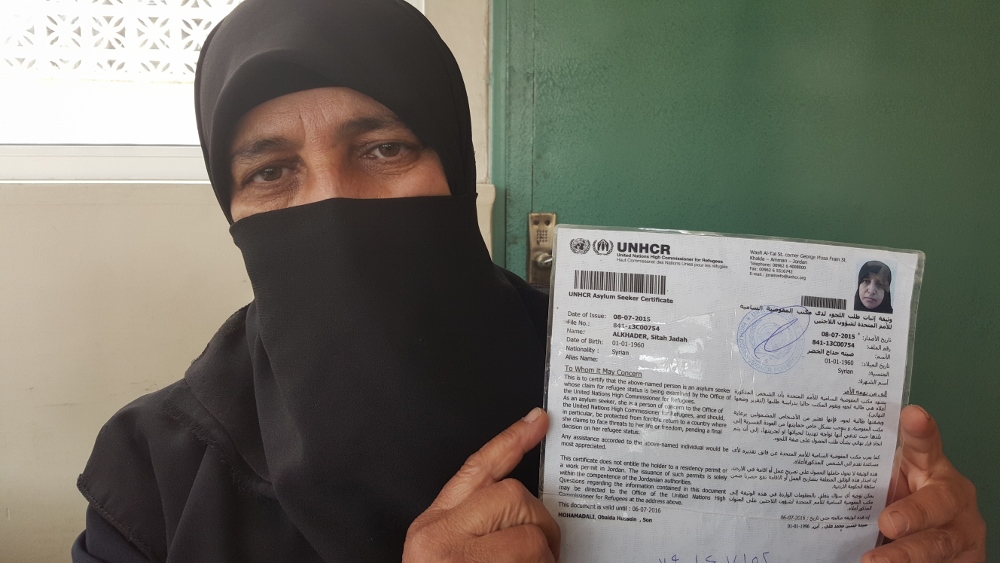 Yet there are signs of resilience, too. Sitah Jadah Alkader and one of her daughters recently spent a morning at Caritas medical clinic in downtown Amman, Jordan. Alkader is coping while her husband and five of her children remain in Syria. In Amman, she lives with her daughter, a son and several grandchildren. Odd jobs, like cleaning apartments, and assistance from Caritas keeps the family going. Alkader wants to return to Syria.

That is also the case with Barihan Mousa, 48, the mother of three, though she faces her own set of challenges: One son is in the Netherlands now, other family members are in the United States and her husband faces health problems related to diabetes.

Though happy for her son, she says a return to a peaceful Syria would be best for the family. "I pray every night to go back to Syria," she said. "I am homesick." The pressures on the family are common: they are living with a sister-in-law, receive a small stipend from the U.N. for rent, and their lives revolve around waiting to hear what happens next.

"I want to be optimistic," Mousa said, and greeted the recent news about Russian military forces pulling out of Syria as one sign of hope. But a sister still in Syria told her that the overall situation remains fragile, tense and uncertain. "It's very hard," she said.

The same might be said about the overall situation in Jordan, said Wafa Goussous, an executive with the Middle East Council of Churches, a regional ecumenical body that has responded to the refugee crises with various types of humanitarian assistance. 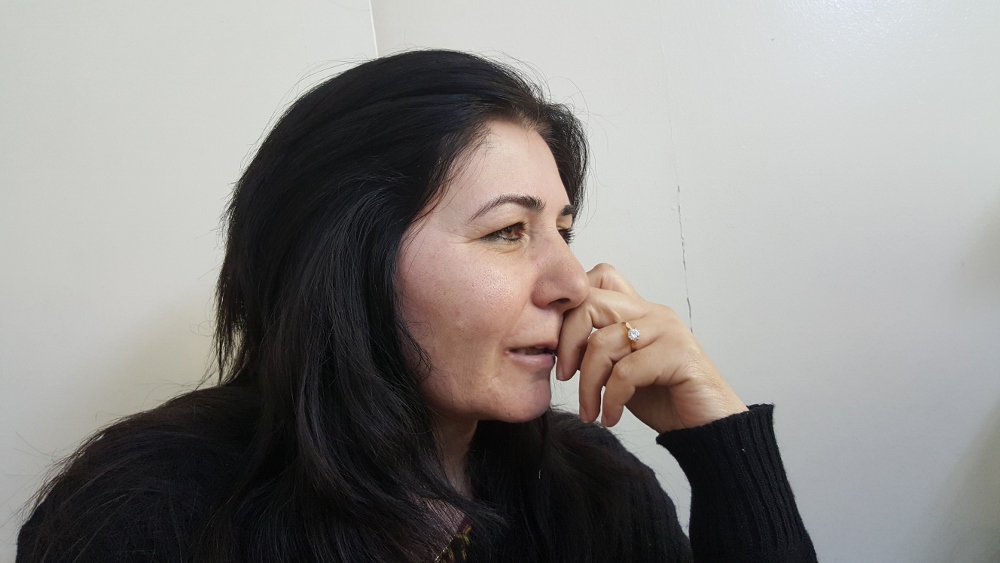 Barihan Mousa, 48, is the mother of three children and came to Jordan from Syria. One of her sons is in the Netherlands while other family members are in the United States. (GSR photo / Chris Herlinger) 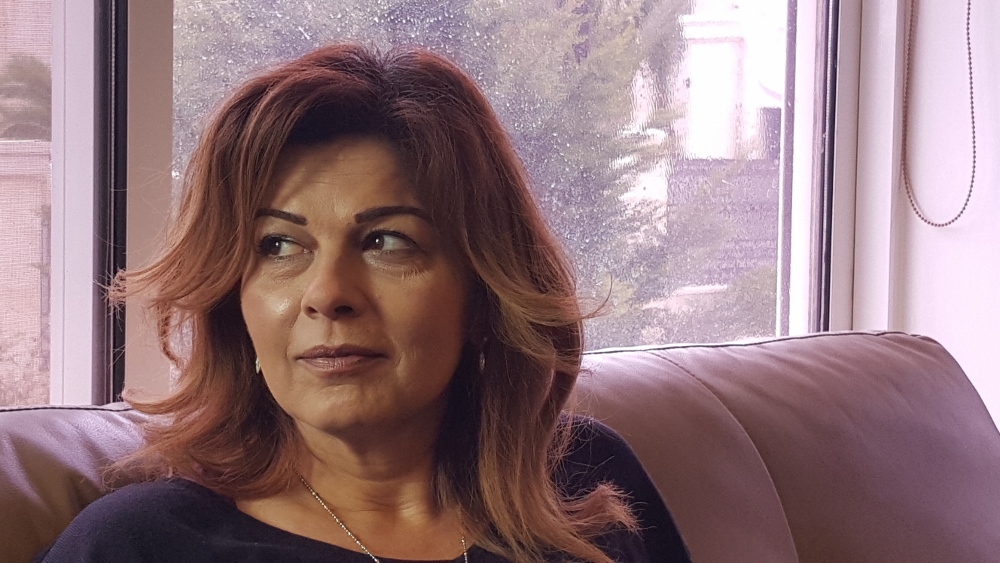 Wafa Goussous is an executive with the Middle East Council of Churches, a regional ecumenical body that has responded to the refugee crises with various types of humanitarian assistance. (GSR photo / Chris Herlinger)

Jordan's long tradition of welcoming refugees — such as Palestinians in 1948 and 1967 — is a point of immense pride for Jordanians. But there are also legitimate concerns about pressure — the a country of 6 million is now hosting 1 million more and facing more demands on its water reserves, food supplies and infrastructure.

"We can handle it if the international community would inject the funds for the balance," Goussous said of the humanitarian needs of Syrians and Iraqis living in Jordan.

Refugee camps like Zaatari are starting to feel like permanent settlements, though there is still the hope, particularly among Syrians, that someday they will return home.

There is a long history of such hope. At the beginning of any humanitarian crisis, "People will keep the dream to return. At the beginning, people always say, 'We will go back.'" Though not trying to sound pessimistic, Goussous said, "even if the war stopped now, how many years would it take for Syria to rebuild? Look at Iraq: it's been 13 years and people are still leaving."

That strikes a chord with Mohammad Rostom, who spent time briefly at the Zaatari camp before he was reunited with his father, brother and others in Amman.

Though cautiously hopeful — "this is life, what can you do?" he said — Rostom conveys a sense of having gone through an essentially strange, absurd, tragic experience.

Though he says thanks to God — to Allah — for the flight that landed the family safely in Jordan, life is now pinched, the horizons now dimmed.

He looks down at a plate of half-eaten food. "We didn't win anything. The war won," he said. "We lost Syria. We lost it."

Cracking in the light

At US-Mexico border, SOA Watch focuses on the same message through a new lens