From her corner of the world, helping migrants from various countries now caught in a legal limbo in Costa Rica, Sr. Isabel Cortés has a view of the forces prompting the massive movement of people across continents and countries.

"It is not a plan of God," she said. "It goes against God's plan, that we, humans, have caused it because of our ambition. When human rights aren't respected, when people live in the midst of violence, of war, of the power of the strongest, who are looking after their own interests, of course those who want to lead a different life are going to change, are going to move," she said.

Cortés, a member of Nicaragua's Congregation of Missionary Servants of Christ the King (Congregación Sirevas Misioneras de Cristo Rey), has been involved from the start of the migrant crisis that has unfolded in southern Costa Rica. For more than six months she has devoted hours each day to helping people in a situation that she forecasts will not end any time soon.

She and Sr. María Mercedes Calero from the Nicaraguan mission work in La Cuesta, a Costa Rican town close to the southern border with Panama. Initially, they cared for Cuban migrants there but now are also ministering to cross-continental migrants who keep pouring into Paso Canoas, an international town about 8 kilometers (5 miles) from La Cuesta that straddles both sides of the border and is a key trade and commercial center; shops line both side of the street that connects the two countries.

Hundreds of migrants from countries as diverse as Angola, Mali, Pakistan, Senegal — speaking Portuguese, French or English, as the vast majority have no knowledge of Spanish — are amassed mostly in the southern part of Costa Rica.

They are officially described by the Costa Rican government as "extra-continental migrants," people who have crossed the Atlantic Ocean, in many cases on board cargo ships.

Cortés says the region's governments should be more sensitive to the distressing situation thousands of migrants face on their perilous northward journey through Central America and Mexico toward the United States.

As Cortés explained, the sisters have been, along with Costa Rica's government and specialized agencies, a key component in the humanitarian support the migrants have been getting.

In Paso Canoas, the sisters work in a camp where migrants receive medical assistance from Costa Rican Red Cross (Cruz Roja Costarricense) personnel. The sisters' interaction with the migrants includes visits, usually twice a day. They go from La Cuesta to Paso Canoas to distribute the meals they cook, along with clothes and personal hygiene items. During these visits, the sisters engage in dialog with the migrants, offering spiritual support.

They encourage migrants to speak, to tell their stories and express their needs. Since the migrants profess different religions — mainly Catholicism and Islam — the sisters approach them with a general discourse, encouraging them to pray, assuring them that "God is among us." Cortés said she is trying to have an area set up for Muslim migrants to hold their daily prayers.

Their humanitarian work began with Cuban migrants in November, providing them "food aid, motivation, support — because they came depressed — listening to them, cleaning them up, giving them what they needed as persons, since the journey is much too heavy," Cortés recalled.

The crisis was triggered in part, Costa Rica's government explained, when security authorities dismantled a trafficking network that was a link in a chain of organized crime gangs profiting from a steady and increasing flow of people, mostly Cubans, heading to the U.S.

The north-bound continental trail, which for years has been followed by Cubans, and, to a lesser extent, Africans and Asians, starts in South America — Ecuador, for the islanders, Brazil, for the extra-continentals — continues through Colombia and Central America, and crosses Mexico.

The flow of Cubans increased as a result of plans to normalize relations between the United States and Cuba, announced in December 2014. As talks began between the countries, worries increased that U.S. policies that allow Cubans to "fast-track" their legal status could be changed.

The migrant crisis worsened in November 2015 when the Nicaraguan government closed and militarized the 309-kilometer boundary shared with Costa Rica. That was eventually solved through a major Costa Rican-led humanitarian effort which involved other countries along the trail, such as El Salvador, Guatemala and Mexico, as well as the International Organization for Migration.

After spending months lodged in government shelters and with support from the communities where they stayed, the approximately 8,000 Cubans were gradually taken by land or airlifted to the Mexico-U.S. border between January and March.

Costa Rican President Luis Guillermo Solís' administration repeatedly warned that the effort was a one-time-only action aimed at solving that specific crisis and advised Cuban nationals who were planning to start the journey not to do so.

But the inevitable flow continued, and more Cubans have been arriving at the Costa Rica-Panama frontier, only to find they are no longer allowed into Costa Rican territory. The crisis triggered in November thus began replicating on the Panamanian side.

Cuban migrants joined by others from overseas

Since then, adding to the complexity of the situation, hundreds of extra-continental migrants have illegally crossed the border from Panama and are seeking the treatment the first group of Cubans got. Some are filing for asylum.

Unlike the thousands of Cuban nationals, the African and Asian migrants are undocumented and face the added difficulties of differences in language and culture. Deportation wasn't an option because it was impossible to determine where to send them. In April, the Costa Rican immigration authorities decided to provide these migrants with 15-day permits allowing them to move freely throughout the country provided they went to headquarters in San José to register.

However, very few of those migrants — unofficially estimated, as of early June at around 1,200 — have complied. Instead, they have managed to reach Costa Rica's northern border, hoping to be able either to cross the land boundary or to skip Nicaragua by taking a risky sail on Caribbean waters to Honduras.

The chaotic scenario in Paso Canoas is repeated in different Costa Rican border posts along the northern boundary, including the main crossings of Peñas Blancas and Los Chiles, respectively some 311 kilometers and 300 kilometers (193 and 186 miles) northwest of San José.

The Costa Rican government has said it will address migrant issues with respect to national and international legislation and human rights, particularly for minors.

In Pasa Canoas, the sisters are adjusting their ministry to accommodate arrivals from other countries. "We started helping them with food, to support them, to see them in the human situation they were in, and listening to them," Cortés said.

The situation is "a bit difficult, yes, because they speak different languages, and this make communication a little difficult," she further explained, adding that "they're also from different cultures — as Latinos, we don't know much about Africa."

In spite of cultural and religious differences, trust has been gradually built with the extra-continental population, an achievement made possible mainly through the sisters' attitude, she explained.

"In our mission, we present a Jesus who is alive among us, that through us, through the mission we carry out, Jesus is present, active," she said. "We have Muslims, whom we feed, and they look for us, and we understand them, and despite the distance we have, we see the neighbor in them," the sister said.

"Let's remember that, since our baptism, we've been called to a mission in particular, the mission which Christ has entrusted to us, to get his word to others: 'Go throughout the world, preach the Gospel to all creatures.' So, we're living that mandate, taking Christ to our brothers," she added.

Migrants also help with their ministry. Mustafa, a construction worker who is on a two-year journey from Mali, arrived about a month ago in Paso Canoas. He presently lives in the town of La Cuesta, where he is waiting for a solution that will allow him to continue his northward trek, interrupted by the Nicaraguan government's adamant position of keeping the border with Costa Rica closed to undocumented migrants.

Meanwhile, he contributes to the effort of sisters in La Cuesta's Santa Marta parish, coordinated mainly by Cortés, helping in the parish kitchen where the meals are cooked to be brought with spiritual support to the migrants in Paso Canoas.

"I want to leave," he told Global Sisters Report, speaking in a complex combination of French, Portuguese and Spanish, adding in imprecise terms that, "I need a paper from Immigration," referring to Costa Rica's immigration authority. "When I get the paper, I want to leave through the Costa Rican border," he said.

He decided to migrate because "there are no services" in Mali and, without mentioning figures, he pointed out, "I have to work," but "there [in Mali] I work for little money. That's why I left." He says there is more work available in the U.S., and he has family, a sister, already there.

Briefly referring to his journey, he said it began in 2014 in Bamako, Mali's capital, the start of a three-stopover flight which landed him in Brazil, where many African migrants arrived for that year's world soccer championship. Large numbers of people remained in the country after the competition ended. Mustafa said he stayed in Brazil for "two years, working in construction," before starting his way toward the United States.

In the sister's view, the irregular flow through South and Central America and Mexico will continue, worsening if more borders are closed.

"So, I don't think this migration is going to stop — they're going to continue to arrive," Cortés said. "Conflict arises when borders are closed," she added. "It shouldn't be, since countries have to be conscious that a migrant has a right to go through countries — their borders are not for being closed, seeing so much need."

[George Rodriguez is a freelance correspondent based in Costa Rica.]

Related - Q & A with Sr. Isabel Cortés, sharing the faith with migrants 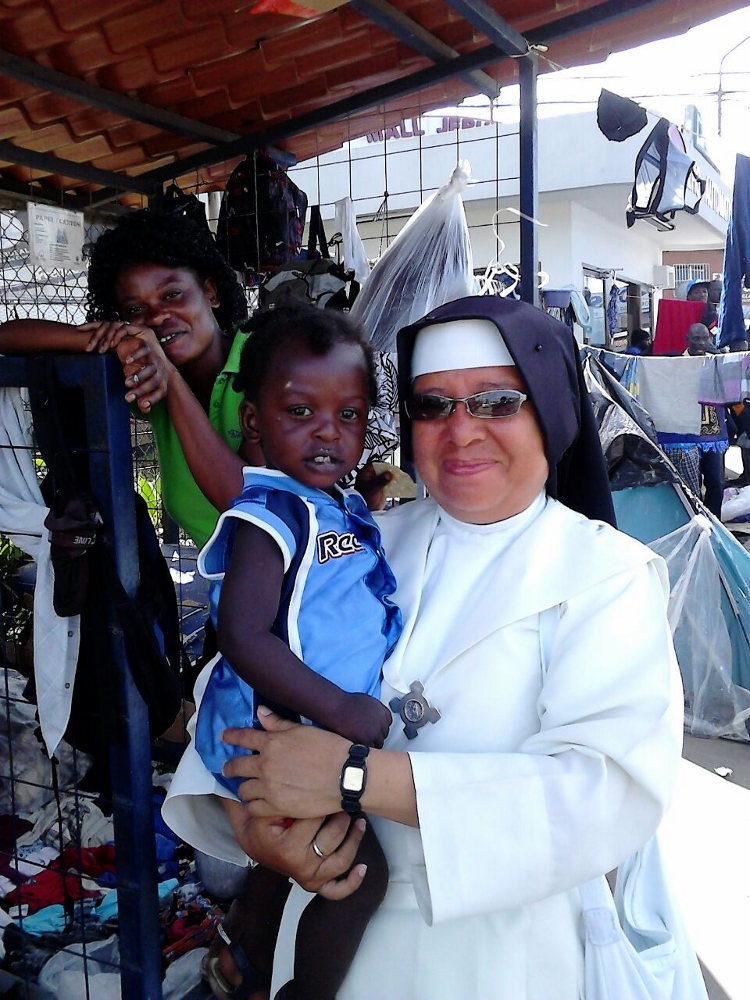 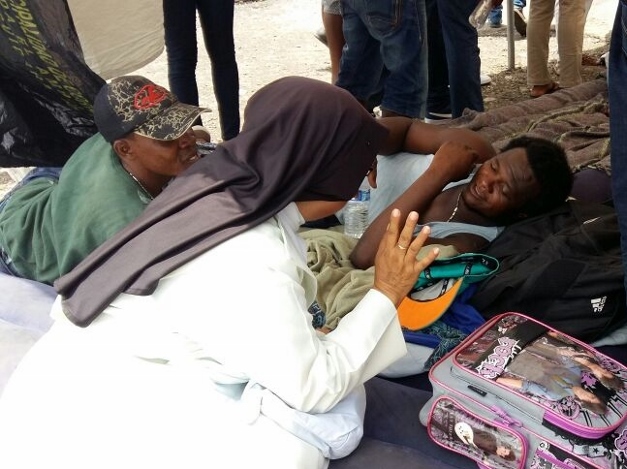 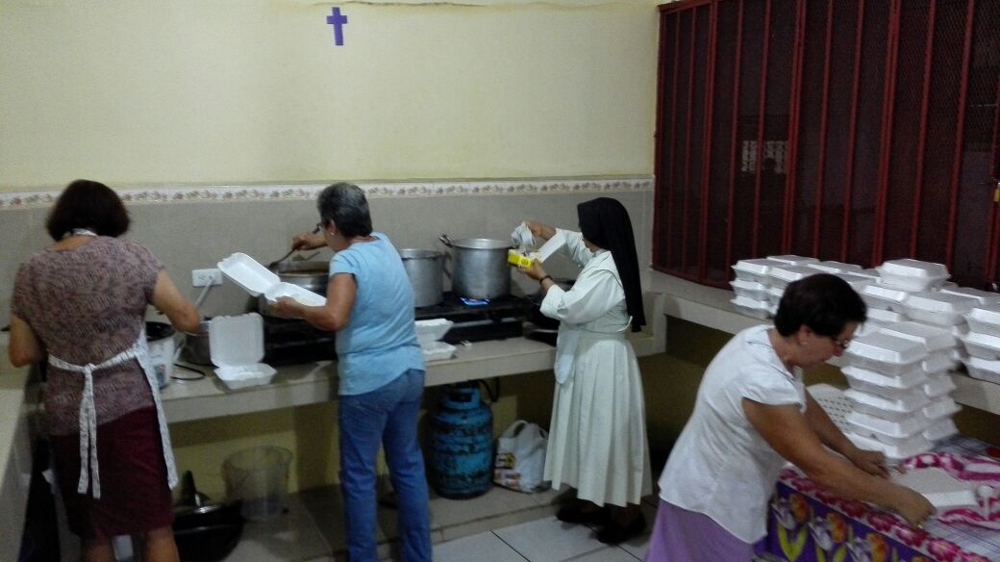 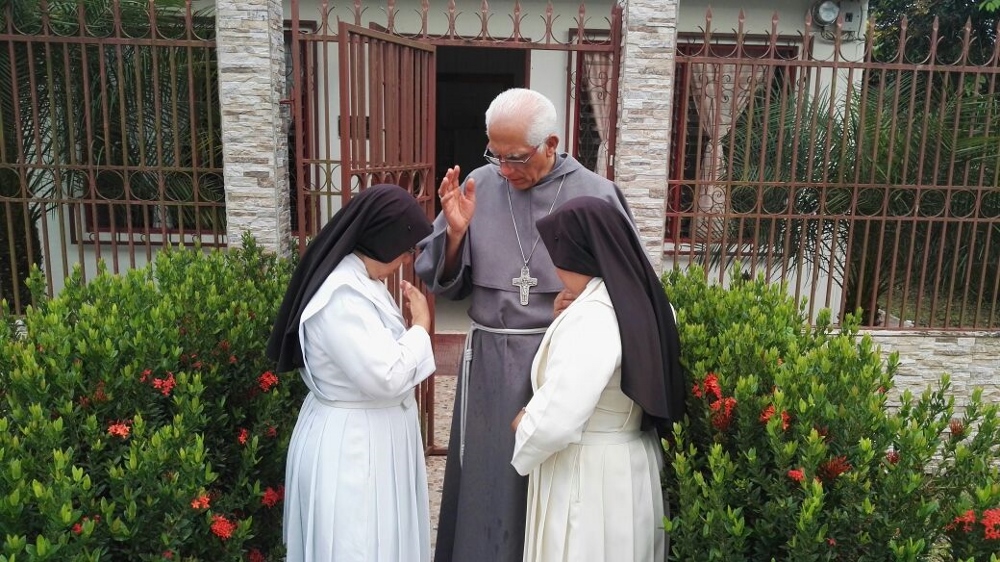 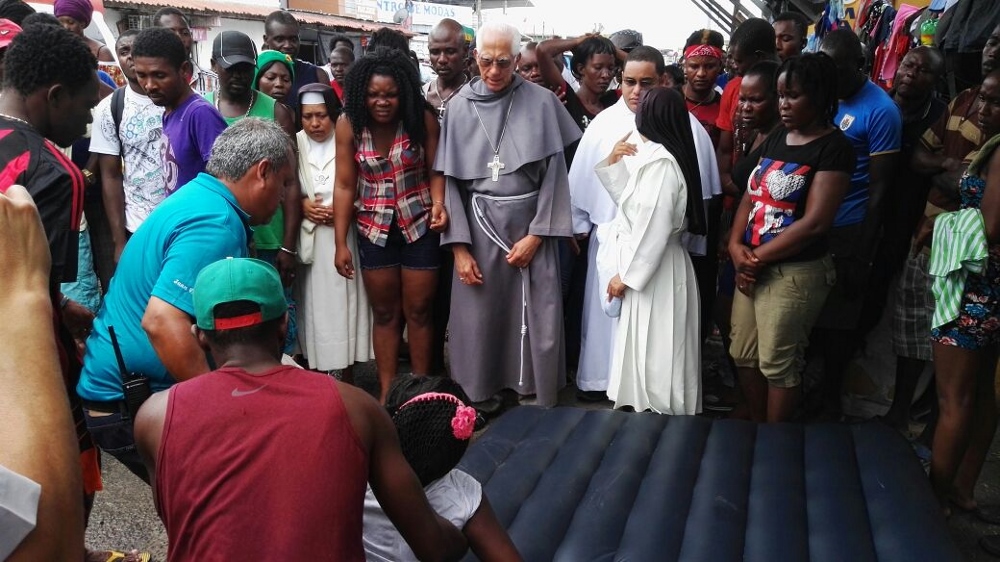 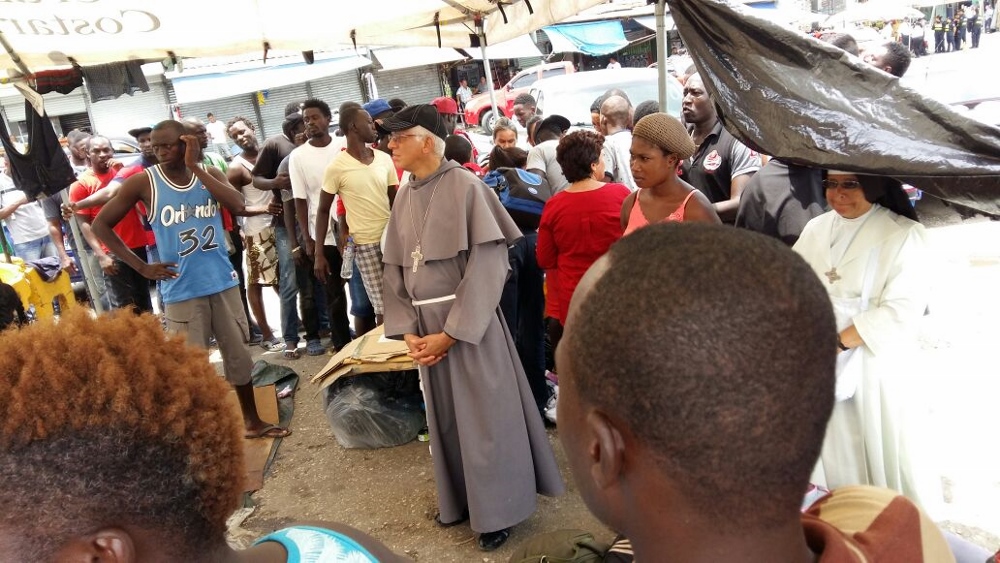 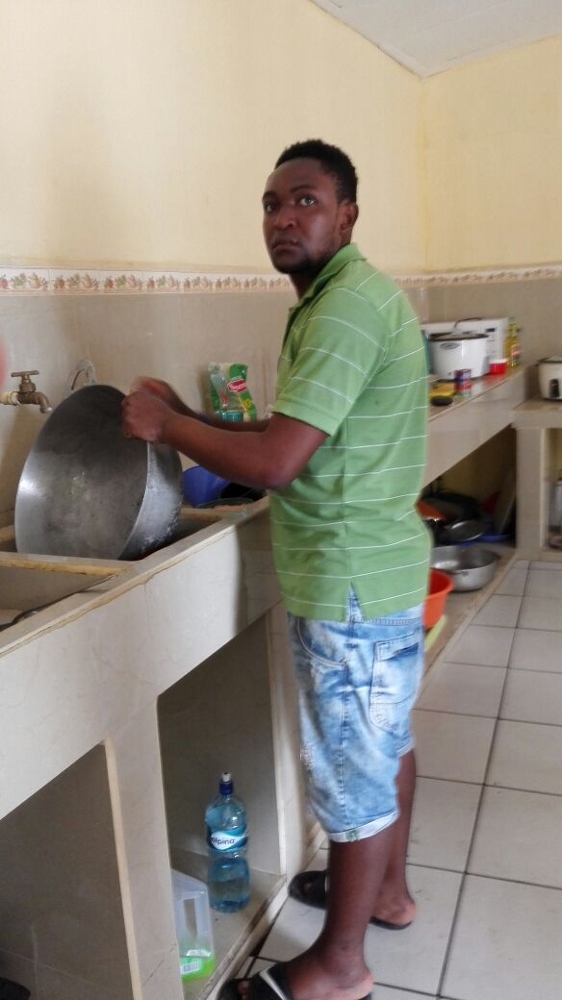