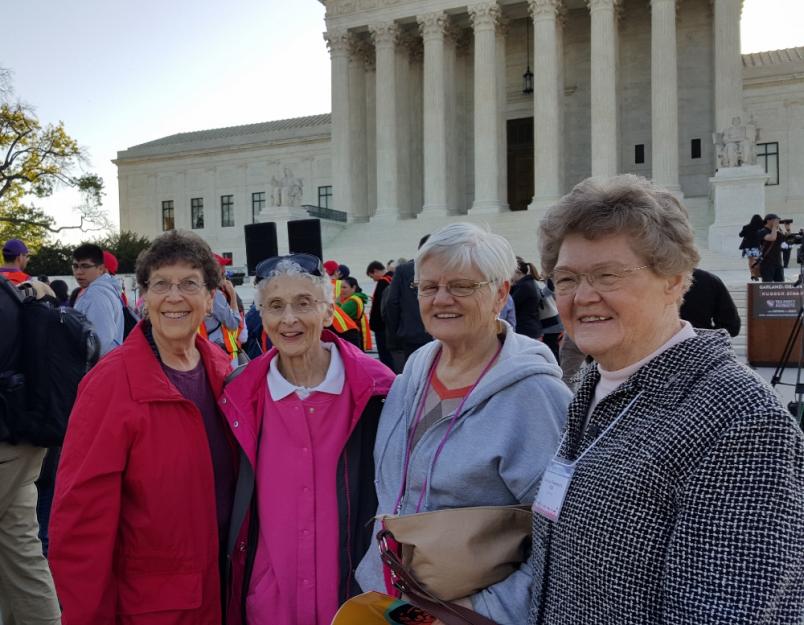 Washington, D.C. — Lending their voices, support and prayers, dozens of sisters from various congregations gathered with hundreds of immigrants and advocates in front of the U.S. Supreme Court building April 18 as justices heard oral arguments regarding Obama Administration immigration policies.

"This is a central concern and we want to stand in solidarity with our immigrant sisters and brothers," said Mercy Sr. JoAnn Persch, executive director of the Interfaith Committee for Detained Immigrants in Chicago. The organization operates houses and provides services for detainees who are waiting for their case. "We believe this immigration system is evil. We are people of faith and operate on the basis that every human being is our sister and brother."

The case at hand questions the legality of Obama's executive actions on immigration in the form of two initiatives: Deferred Action for Childhood Arrivals (DACA), and Deferred Action for Parents of Americans and Lawful Permanent Residents (DAPA), which the president launched in 2012 and 2014 respectively. A decision is expected in June.

Though the original DACA guidelines from 2012 are not being challenged, 26 states claim that 2014's expanded DACA and DAPA violate the Constitution.

But Charity Sr. Mary Ellen Lacy, who is also an immigration attorney, said the arguments by those objecting to DAPA are basically "using a lot of bluster." The objections "have no legal justification," she said.

There is a long history of executive action involving immigration issues, including DACA in 2012, so 2014's DAPA should be no different, she said.

"We have a culture of fear. Pope Francis tells us this is the year of mercy. There are plenty of resources in the U.S. for us to be as generous as we want to be," she said. "We are never made better by taking away the God-given dignity of others; we become less." 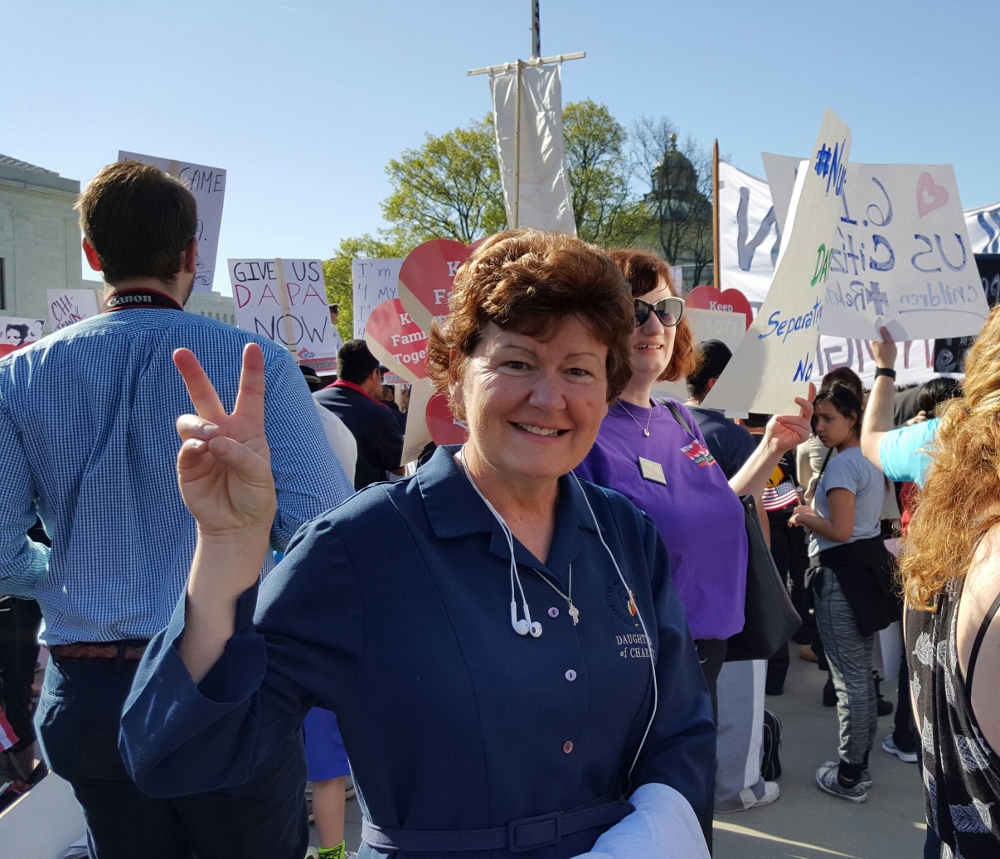 Should the court decide in favor of the United States, an estimated 3.7 million undocumented immigrants could qualify for protection from deportation, according to the Migration Policy Institute, as early as June 2016.

Oral arguments suggested that the justices are split ideologically. The four liberal justices focused on whether state governments can even sue over disagreements in federal policy, while challengers focused on Obama’s grant of “lawful presence,” arguing that creating a new legal status would require Congressional approval.

Nearly all those in the labor force are employed: 94 percent of DAPA recipients, 85 percent of the original DACA, and 72 percent of DACA-plus, according to the same study.

"We cannot not be here," said Sr. Pat Murphy, also a Sister of Mercy from Chicago. "It is a moral issue. I think this period of history will be a very shameful one when we're teaching American history in a few more years because we are sending people away from this country who are coming for political and economic freedom. They're being driven from their countries and when you look at the base of the Statue of Liberty that says 'give me your hungry, your poor' [sic] — what's happened to us?"

The crowds grew as morning wore on, as labor unions, church groups and other organizations joined the swelling throng in front of the Supreme Court building. Sr. Simone Campbell, executive director of NETWORK, gave an opening prayer in Spanish and English. "This is a great day for justice," she said. "We pray that the hearts of the justices be open, their minds clear and spirits free to do what is right," she said in prayer. "Lord, we ask you to open the hearts and minds of the justices." 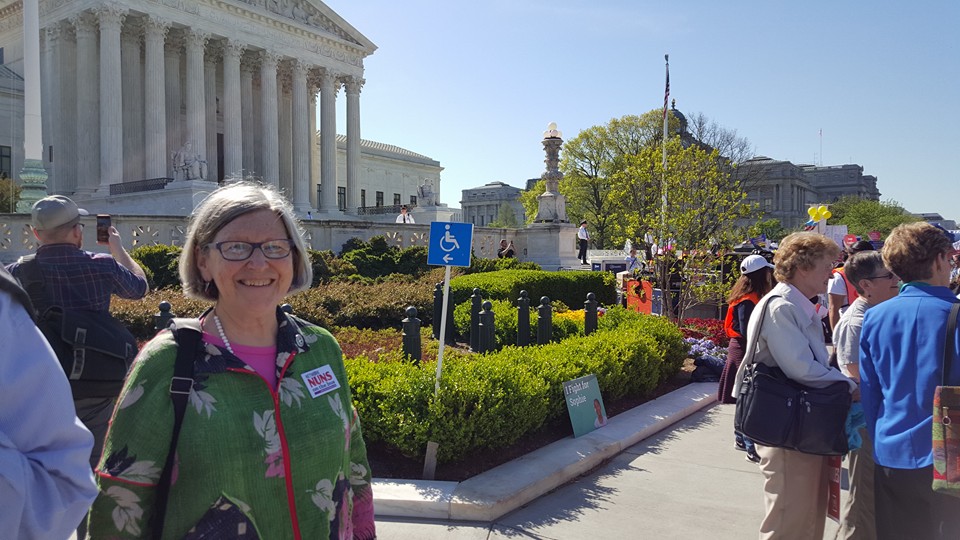 Social Service Sr. Simone Campbell, executive director of NETWORK, a lobbying organization based in Washington, D.C., was among the sisters and other supporters at the Supreme Court April 18. (GSR photo / Gail DeGeorge)

In an interview a few minutes later with GSR, she said, "Catholics should be engaged in this issue in welcoming the immigrant. The pope has made this abundantly clear." She noted the pope's actions in taking a dozen Syrian refugees from the Greek island of Lesbos over the weekend, and the heartbreak that there are so many thousands more.

"This issue at the court is not about refugees, it's about people who have been contributing to our society for years, for decades, but do not have status, because the people across the street," pointing to the U.S. Capitol Building "have failed to fix a broken law." Even if the justices decide in favor of the Obama Administration, there is still work to be done, she said.

In the event of a 4-4 tie, the lower court's ruling (that the executive actions are an overreach of the president's authority) would stand, though the case could be reheard in the future.

Like Campbell, John Gehring — Catholic program director at Faith in Public Life, an advocacy group in Washington — points to the pope, saying that Catholics are responding to his call that "a culture of indifference is unacceptable."

"Our hope is that Catholic sisters and clergy standing with immigrants outside the courthouse are a vivid reminder that this case is about more than dry legal analysis or typical political posturing," he continued. "It's about real people. It's about the kind of country we're building for our kids and grandkids. Our prayer is that the court rules on the side of human dignity and keeps families together." 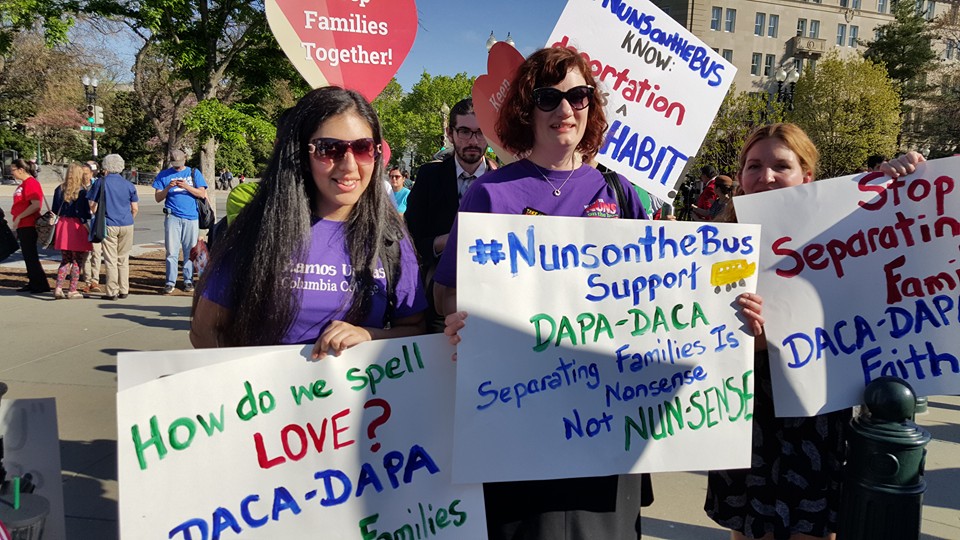 Staffers from NETWORK. At left is Diana Pliego, the organization's government relations associate and someone whose status is protected by DACA. (GSR photo / Gail DeGeorge)

Charity Sr. Andrea Koverman was in D.C. for the annual advocacy meetings and came out to the Supreme Court's steps to join other sisters and immigrant groups. "I'm so glad to be here," she said. Koverman is based in Cincinnati at the Intercommunity Justice and Peace Center. "I'm here to show our support for immigrants in this country. We've been fighting long and hard and hoping and praying and wanted to offer our support that [the justices] will make the right decision."

Pliego herself has legal status in the U.S. because of DACA, but her parents are at risk unless DAPA becomes a reality.

"Before DACA, my family struggled," she said. Since then, she and her brothers have had opportunities to advance on the social and economic ladder, she said.

Campbell said if the justices determine the Obama Administration policies are constitutional, the decision would allow "millions of people who are contributing to society, but don't have papers, to stay. They are investing in our society, justice demands that they be integrated into our society."

She spoke specifically about two teenagers whose parents were recently deported. "They need a whole family, they need their parents here — that's why I'm here today."

The danger of growing accustomed