He wasn't attempting to cross the border fence that separates his city from Nogales, Arizona. Reports say he was throwing rocks at border agents on the United States side to distract them from two men climbing the fence from Mexico into Arizona.

On the weekend of the fourth anniversary of his murder, the site of his death drew a crowd of more than 1,000 people on either side of the 18-foot steel fence at SOA Watch's annual rally Oct. 8-10. SOA Watch is an organization that for 27 years has protested the School of the Americas (now the Western Hemisphere Institute for Security Cooperation, or WHINSEC), a U.S. Army school that SOA Watch says has trained Latin American soldiers in techniques of violent repression.

The weekend included a prayer vigil at the Eloy Detention Center in Eloy, Arizona; various educational workshops, including how to build a grassroots organization, how trade agreements cause economic and labor abuse, and how to refuse to pay taxes so as not to support a war; concerts at the border; and a prayer vigil for Rodriguez.

Also over the weekend, Catholic sisters hosted Encuentro de Hermanas, where they gathered in a soup kitchen in Mexico to offer prayers and discuss immigration reform.

But before the workshops and spiritual gatherings, about 1,000 people marched from one country to the other, ending at the border fence, Ambos Nogales.

"Esta lucha es protesta," some chanted between the beatings of drums — "This march is a protest."

This year, SOA Watch moved its annual protest from Fort Benning, Georgia, where WHINSEC is located, to the border to "heighten awareness" of the violence and militarization that is both forcing migration and harming migrants, said Providence Sr. Kathleen Desautels, who has been involved in the movement for nearly two decades.

"It was a call for many people who are in solidarity with SOA Watch and/or in solidarity with folks at the border, for a large contingent of people to come to the border to raise up the issue of how the border is so militarized and to try to expose the economic and political policies that the U.S. has that creates the problem," she said.

One man was a familiar face at the rally. Former Maryknoll priest Roy Bourgeois, founder of SOA Watch, delivered a speech on the Mexico side of the border fence, uniting the original reason for the group's founding with the new awareness it was bringing to the border.

"We came to realize in our movement that if we were in the shoes of so many of our sisters and brothers in Latin America, we would be doing what they are doing: If we stay with our children, we die. The poverty, the violence becomes unbearable. So they are doing what we would do — they are fleeing from their homes to live. And we have seen that close connection between the SOA at Fort Benning, Georgia, and why millions of migrant brothers and sisters are being forced to leave their homes. For that reason, we are here to express our love and solidarity.

Calling attention to the root of mass migration

When SOA Watch began, Desautels said, women religious made up about two-thirds of the group's members.

"Many of us who have communities who had been missionaries in Latin America knew of the many deaths that were caused," Desautels said. "It was U.S. policy and military that trained the military from those Latin American countries. They came to Fort Benning at SOA to be trained, went back, and were responsible for the deaths of [Salvadoran Archbishop] Oscar Romero, the four American women, the Jesuits and thousands others."

Lee Rials, public affairs officer at WHINSEC, denies the correlation between the school and violence abroad.

He said that "use of the term 'graduate' for everyone who's been here" is deceptive. Countries send people to the institute for individual courses that can last between four weeks and a year, Rials said, and nobody leaves with a WHINSEC diploma.

After it was founded in the late 1940s, the school initially taught "tactical, professional" courses to help students improve job skills on whatever that specific military needed, such as engineering or medical training, he said. Though the school still offers those classes, it also focuses on "countering transnational threats" and is "more attuned to what's going on in the world right now."

He said current courses confront the fact that several countries are dealing with how to combat human trafficking or drug manufacturing, for example. That these courses have to do with torture and techniques of violent warfare is "a creation — absolutely false and ridiculous," Rials said.

"The idea that the institute is responsible for the behavior for somebody who had been here for something unrelated to the crime accused, usually separated by many years, as well ... [is] more of a talking point to malign the school, and because of the repetition, that has become somewhat accepted," he said.

As for a recent ruling on a lawsuit that said the identities of WHINSEC students and faculty could remain secret, Rials said dissenters say this keeps outsiders from knowing "how we're doing and what we're doing." But the best way to know that is to tour the facility, visit classes, and speak with students and faculty, he said. "You're certainly welcome to do that."

But SOA Watch activists typically visit by way of peaceful protesting, with roughly 20,000 participants at the annual gathering at its peak. Those numbers have tapered off, and SOA Watch decided this year to move to the border to revitalize enthusiasm and to shift its message slightly, connecting WHINSEC with military violence in Latin America, the root cause of mass migration, Desautels said.

"It was an invitation. It was the right time, and especially before the election, we felt like this was an opportunity to work closely with those who organize at the border and to bring as many folks as we could to be educated about U.S. policies that create the tension there and the reason for having a wall, if you will," she said.

While the protest's move to the border aimed to raise awareness surrounding violence, it also served to increase awareness of ignorance regarding harmful U.S. policies, said Isabel Garcia, co-founder of the Coalición de Derechos Humanos, a grassroots organization based in Tucson, Arizona.

"People who come from all over the country understand what SOA does in Latin America but don't really get that one of the results is mass migration from those places," she told GSR ahead of the protest, where she gave a speech at the wall. "They'll learn through workshops. It will really cross-germinate and be an excellent opportunity for people who really want to think about these issues in a real way.

Garcia, whose father and cousin have been missing since their attempt to cross the border three years ago, said the main issue for Coalición de Derechos Humanos is in regard to the deaths and disappearances around the border, as well as the particularly high incarceration rate for illegal entry.

The United States "uses the border as a laboratory to see what we can get away with," she said. "We do this on those we hate" — she noted that U.S. attention and resources are disproportionately directed at immigrants of color — "and then it's expanded and normalized."

'Fences and hostile language do not help'

The variety of mantras, posters and paraphernalia on display at the Oct. 8 march to the border wall demonstrated the range of causes the protest confronted.

Multiple chants kept the mile-long trek in rhythm. "No racist police; no justice, no peace," shouted the crowd a few times as they marched along the sidewalk, hoping to draw national attention toward the border and their cause. At the border, participants split; some stayed on the U.S. side of the fence as others passed through U.S. Customs and Border Protection, venturing into Mexico.

"[We're here] as a congregation for justice; dialogue; bridges, not walls; fair treatment of all the detainees; and an end to the hostility and abuse," said Dominican Sr. Rachel Cena. This was her first time at an SOA Watch rally — she and several other Dominican sisters traveled together from Tucson to attend.

"Being on the border, you can see the long relationships we have [with Mexico], and fences and hostile language do not help complex problems," she said. "If we're going to break bread, we also have to engage in breaking the word through dialogue and sit at the table of humanity and work together to build community."

Although the protest's new location drew a fresh crop of organizations to stand in solidarity with SOA Watch, many who attended previous protests in Fort Benning followed the group to Nogales.

"Different issue, but same shame," said Rich Weckerle, who has attended SOA Watch's rallies since they began in 1990. He spent six months in federal prison after the protest in 2003.

"Sometimes, when you first hear about an issue, you investigate a little bit and you get caught up in the issue. You get drawn in," he said. "I don't know if that's God's hand on your shoulder drawing you in or what, but you get drawn in, writing letters, giving money, showing up."

Originally from Moscow, Idaho, Weckerle and his wife bought an RV and moved to Douglas, Arizona, to be closer to the border as they became more involved in immigration issues over the past five years. Initially, the move was just for six months out of the year, but "that wasn't enough." They decided to stay full time.

"Suddenly, now you're very involved, and you say to yourself, was it truly the hand of God that had me do it?" he said. "And the more I do it, plus with my six months in prison, the more I knew I did the right thing." 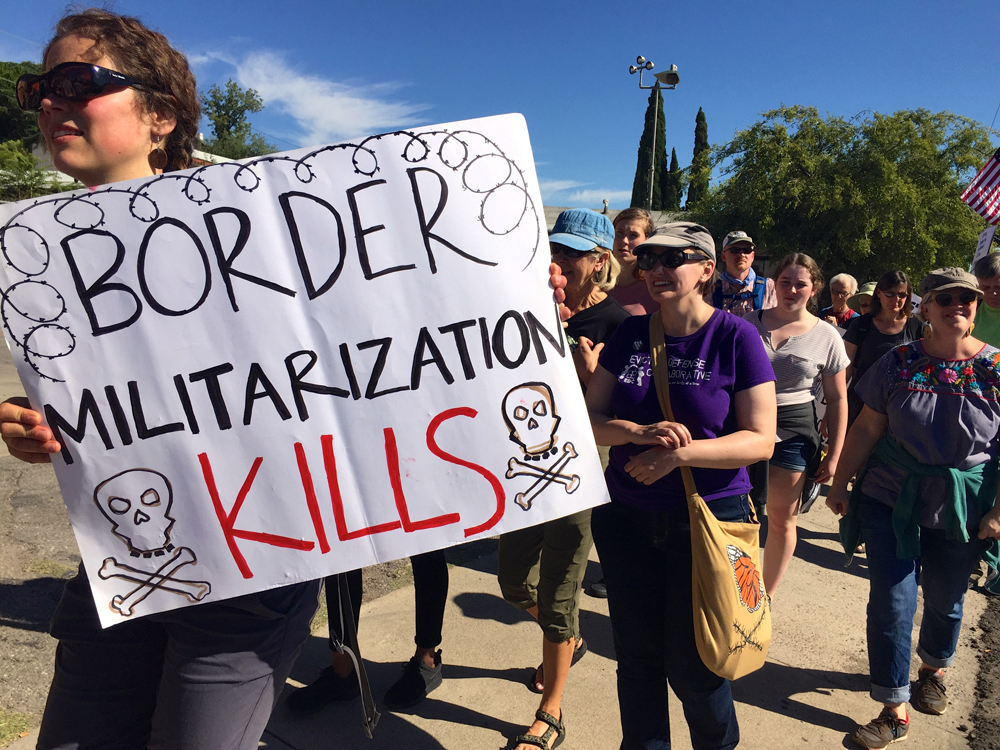 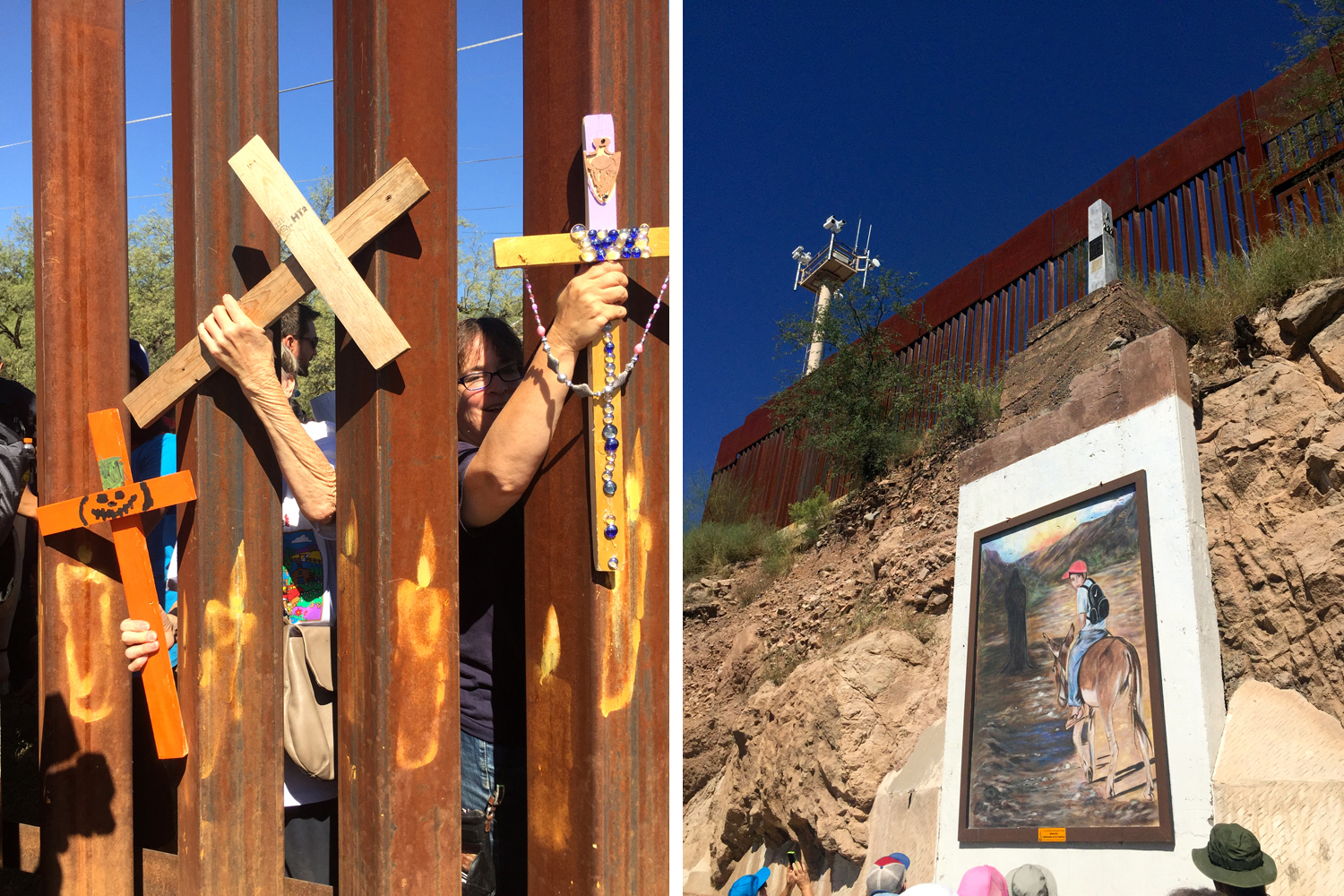 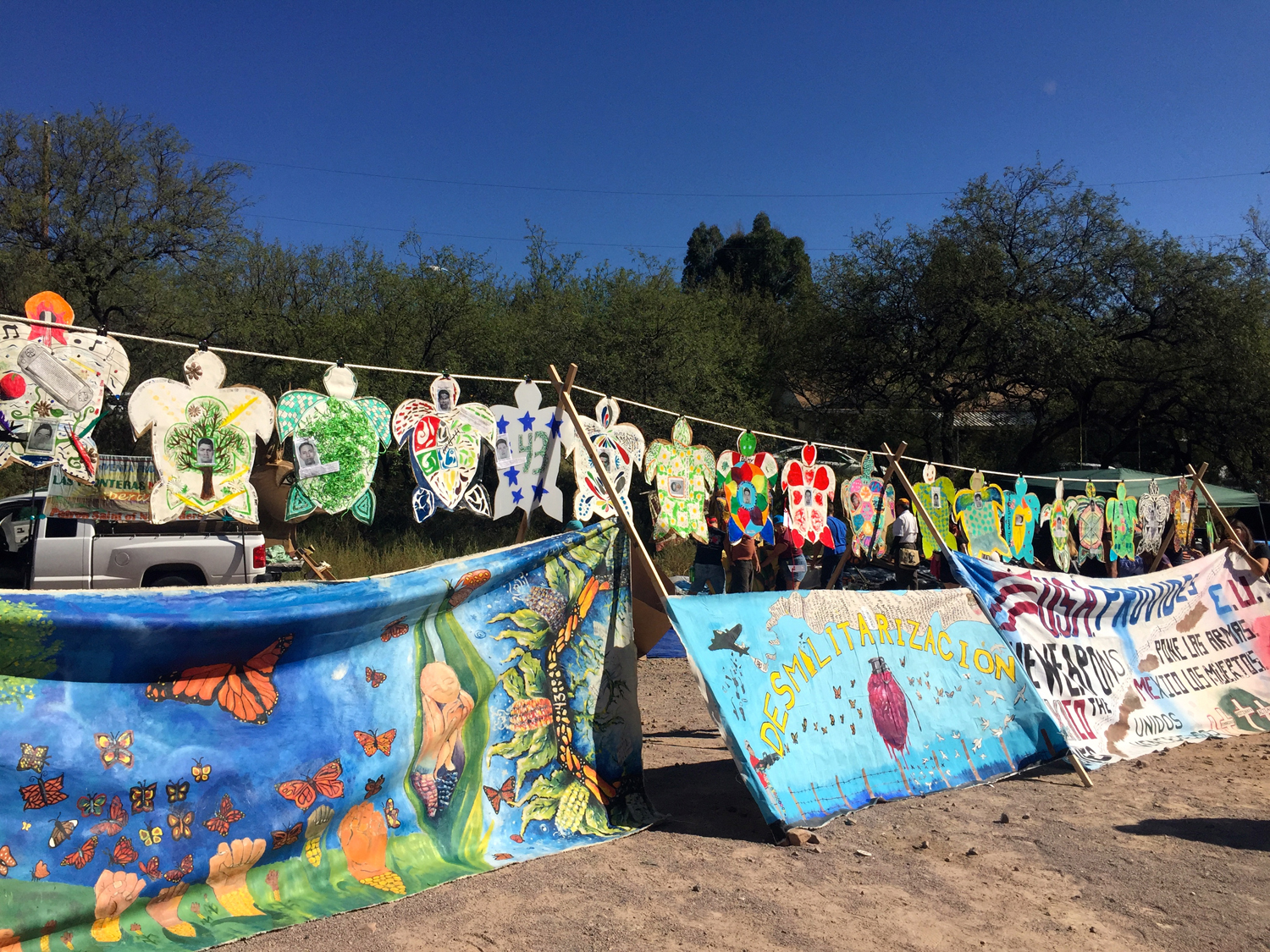 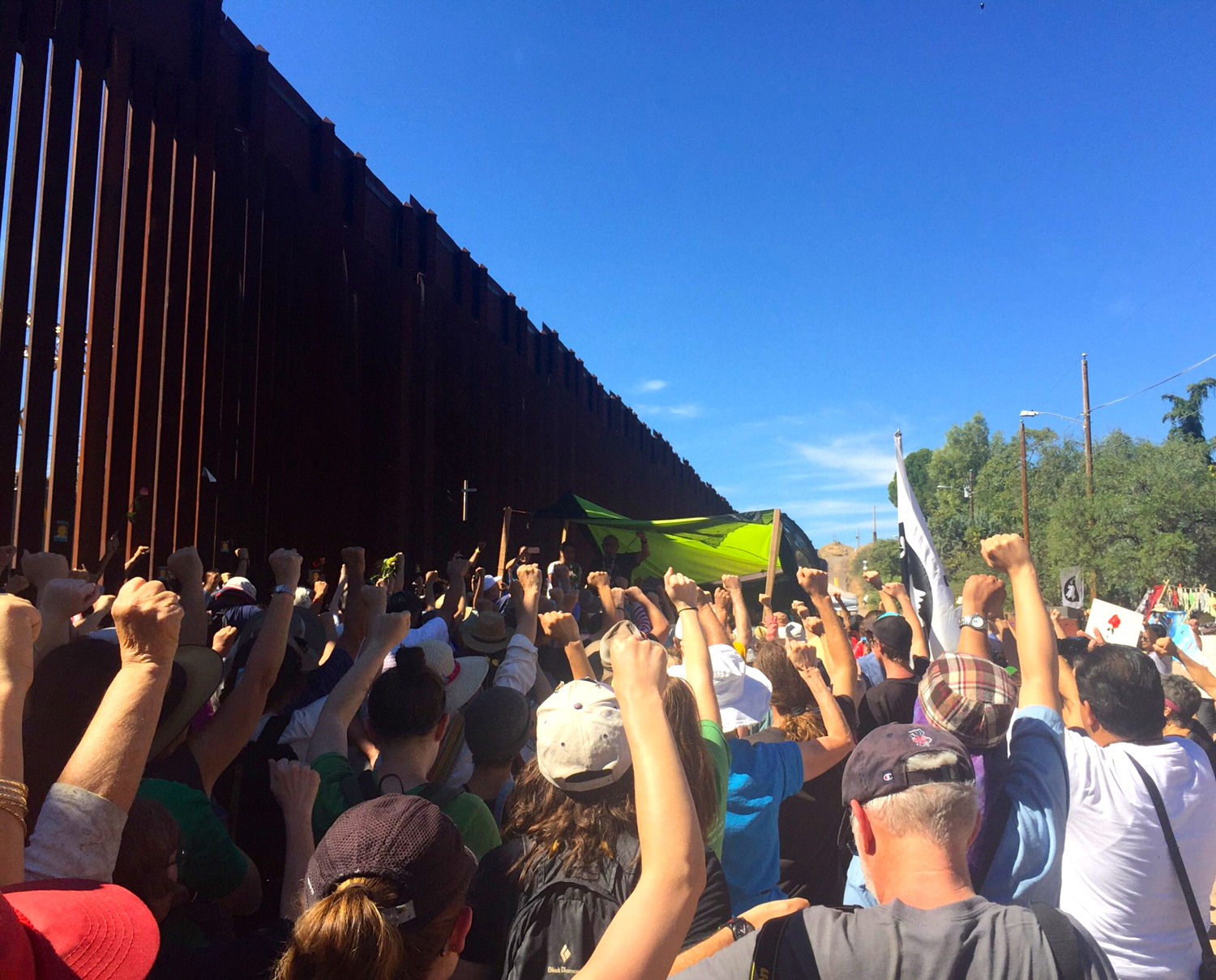 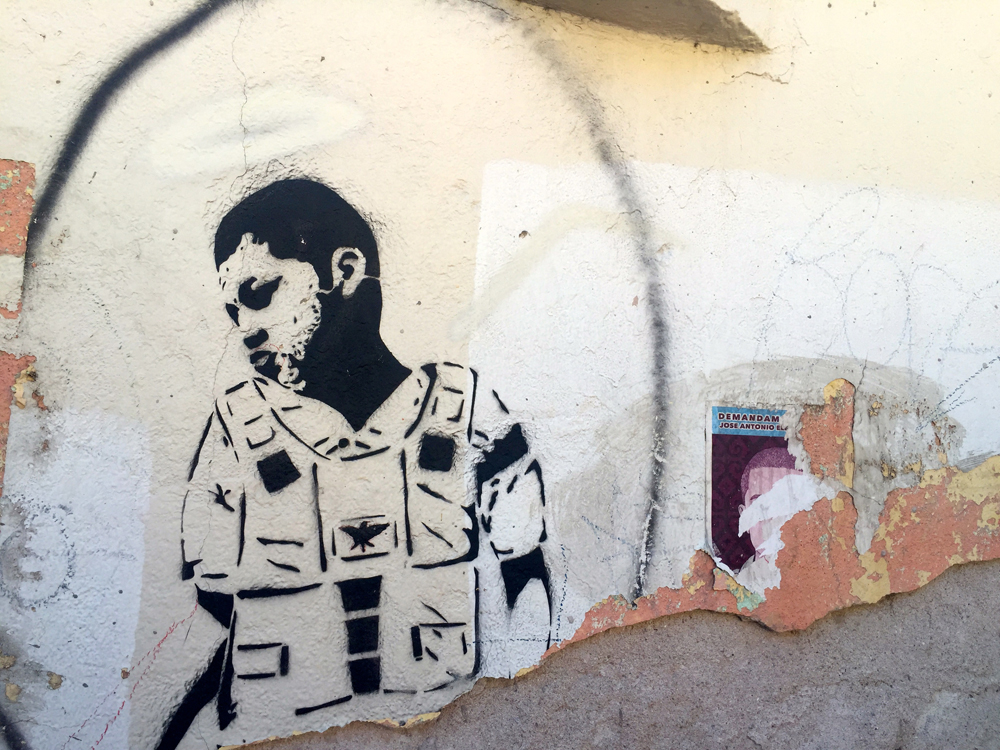