Hassan El Khodr nodded on the phone, listening intently to a Canadian medical professional speak in English so he could translate instructions in Arabic to a newly arrived Syrian refugee visiting the doctor.

El Khodr said it's been like this over the last few months. He answers phone calls from new Canadians from Syria, ready to translate for doctors, teachers or other businesses, in between smiles and greetings to customers buying gas or soft drinks from his convenience store in Chatham.

Members of Chatham's Catholic community recommended El Khodr to help Sr. Eleanor Gleeson and Sr. Kathleen O'Mara of the Ursulines of the Chatham Union and their team support Chatham's first Syrian refugee family. He has worked with the Catholic community for the last 10 years through his active role in the Chatham-Kent Muslim Association.

"I think everybody has had their hearts and eyes opened in a way," Gleeson said.

For sisters and organizations helping resettle Syrian refugees in Ontario, reaching out to help the families means relying on others in the community and forging new paths toward interfaith cooperation.

El Khodr, a Lebanon native, has been in Canada for 30 years. As an Arabic-speaking immigrant, he sees translating for newcomers as his responsibility, but he's proud to help bridge the gap between Syrian refugees and their Canadian sponsors of any religious affiliation.

El Khodr accompanied the Ursuline sisters and their settlement committee to the airport in December 2015 to welcome the Al Hajjeh family: Mohamad, Noura, and their five children, Abed, Mulham, Najem, Aya and Taj. El Khodr's wife, Samar, prepared a traditional meal for the family when they arrived to their new house.

"It's a tragedy happening in Syria, but yes, it did bring people closer together to better understanding and working better together," El Khodr said.

Communities of all cultures and faiths have leapt to answer Canadian Prime Minister Justin Trudeau's November 2015 call to resettle Syrian refugees. Since then, Canada has accepted more than 40,000 refugees.

This is the first time Gleeson and O'Mara have been directly involved with welcoming refugees, though they said helping in a crisis is central to their congregation's history. Along with taking the lead in their own joint sponsorship effort, filing paperwork and organizing volunteers, Gleeson said they've helped other organizations, churches or community groups wanting to sponsor Syrian families.

A few hours from Chatham, the Sisters of St. Joseph in Toronto welcomed a Syrian family in July, and they expect a second family in the coming months.

Sr. Pat Boucher said they anticipated the family arriving soon after they first submitted for sponsorship in December 2015, so they immediately started preparing their settlement committee and volunteers. When the family arrived, their home and supplies were ready for a smooth transition.

"One thing I learned? I had a very simple cellphone," said Boucher, who had taken the lead of the family's settlement.

Boucher said she needed a cellphone with texting capabilities because texts were often the best way to communicate at the beginning. The family told her they could easily translate a text message, but phone calls were difficult without knowing enough English.

Educating themselves and their communities

In the Scarborough area near Toronto, 20 Catholic congregations of men and women collaborate to help refugees once they're in Canada through their organization, Becoming Neighbours Joint Apostolic Ministry.

Instead of only welcoming refugees into Canadian culture, the organization's director, Fr. Peter McKenna, is emphatic that their volunteers want the new families to become their neighbors. It's about creating communities and friendships for new Canadians as they find their way.

"In that process [of sharing cultures], everyone changes," McKenna said. "There's a mutuality of receiving and giving that's really quite profound."

Krista Bowman, a Jesuit Volunteer interning with Becoming Neighbours, said the organization matches volunteers and new neighbors after they meet and get along. Sometimes, the Syrian families speak enough English to communicate; other times, translators help during initial visits.

"It's about helping people feel like they belong and are connected," Bowman said.

When preparing to sponsor Syrian families, Boucher said her Sisters of St. Joseph held weekly meetings of up to 70 people, first delegating logistics of the family's settlement: helping register for school, banks, health care, finding local stores and setting up their home. Then, meetings were held biweekly and then monthly to make sure their supporters could help the family culturally.

Members of the Noor Center in Toronto came to speak to the sisters, associates, staff and others about Islam, their belief system and traditions. Later, a priest with experience in Muslim communities shared what volunteers could expect or notice about Islamic traditions from a Christian perspective.

Syrian men spoke about the political and social happenings in their country so volunteers could understand the context from which the families come. Volunteers learned Arabic words and heard from people who had been refugees from other global situations about what had been helpful or frustrating to them when they first arrived.

Gleeson said just after the Al Hajjehs arrived in Chatham-Kent, a member of the sisters' parish arranged for a Muslim professor from the University of Windsor to speak to the Chatham community about why she wears a hijab. Church and community members alike came to hear her speak, interested to learn more about Islam and the culture of the family joining their community.

After the Al Hajjehs settled, they were invited to many community dinners and events around Chatham. Gleeson said people wanted them to feel welcome, but she also found many were especially curious about the first Syrian refugees to be settled in their area.

The Chatham community showed up in large numbers to events where they knew the new Syrian family would be, like the Catholic Women's League dinner, and Gleeson was delighted to see that it was the children, both Canadian and Syrian, who formed the first bonds.

Parents watched the Al Hajjeh children playing "Ring Around the Rosie," and Gleeson said they understood that Mohamad and Noura are simply parents who want the best for their children.

"In some ways, that was the best kind of education. The kids actually did it because they would — it wasn't preached. They would be natural," Gleeson said.

Chatham has seen immigrants in previous years, but this influx of Syrian refugees because of the ongoing Syrian civil war has opened hearts and minds particularly to Islam, Gleeson said.

According to Canada's 2011 census, Chatham-Kent has about 102,000 people in private households. Its minority population was just over 4,000, with only about 330 Muslims counted at the time and zero immigrants of Syrian background.

El Khodr said the smaller Chatham-Kent community has made it easier for different people to connect.

"Sometimes, people see [our stories] in the newspaper, they come [and tell me], 'Oh, that's nice. That's good what you're doing,' " El Khodr said. "You can see the reflection of the normal people in the street. It is making a difference. People are open-minded."

When refugees come to Canada, they are either accepted as Government-Assisted Refugees, where the government funds their expenses for the first year they are in Canada; as Blended Visa Office-Referred Refugees, where the government splits the cost with a sponsoring community or individuals; or they are privately sponsored, where individuals or community groups fund the family's first year and provide support as they acclimate to life in Canada.

Bowman said recently, new Canadians have approached Becoming Neighbours for help after their year of government sponsorship ends and financial assistance runs out. Government-assisted families find they are not able to afford the homes the government paid for during their first year: Most refugees are not yet proficient in English and have not found jobs that pay enough to cover costs of a house to comfortably fit large families.

While private sponsors, whether jointly supporting refugees with the government or only through their own fundraising, are no longer financially responsible for the families at the end of a year, many do stay connected.

McKenna said privately sponsored refugees often receive more individual support and are able to find work through connections from their sponsoring communities. A Citizenship and Immigration Canada survey determined only 12 percent of government-sponsored refugees find permanent jobs after the first year, while those sponsored privately by church or individual groups, like Gleeson and O'Mara's, hold a 50 percent employment rate after the first year.

In Chatham, Gleeson and O'Mara said although their joint sponsorship of the Al Hajjehs ended in December, they have become friends and continue to help, even working on paperwork and preparing to privately sponsor Noura's sister.

"They know they can come to us if they have questions or if they need something, but they're really forging their own lives, and that, to me, is success," O'Mara said.

Boucher in Toronto said both parents of their jointly sponsored family have already found part-time jobs as they work to improve their English.

Bowman said Becoming Neighbours has donated clothing and furniture and is now helping refugees whose government sponsorship has run out find affordable housing, which can be difficult in Toronto. She works to pair formerly government-assisted refugee families with volunteers in their network to help them learn better English and even visit them at their homes.

One Syrian family Bowman worked with had been lonely in Canada without extended family and friends.

In Syria, "they [would] visit together almost every day and share food all the time. There's just such a rich community," she said. "And for them coming here — they really felt like they missed those friends, they missed people stopping by."

The Ursuline sisters and their parishes have enjoyed their new cross-cultural educational experience. O'Mara said before, her knowledge and exposure to Islam was limited, but she and her colleagues have learned much through sponsoring the Al Hajjehs. She said members of the Muslim community opened doors for them to help the family, even making sure the family had rides to appointments.

Because of media coverage featuring the Al Hajjehs and the Catholic parishes that sponsored them, other groups who wanted to get involved in welcoming Syrian families to the community reached out to the Ursuline Sisters for help.

Gleeson laughed at the idea that she and her colleagues became known as "experts" in the process of sponsoring refugee families. She wasn't surprised that people asked them, as she said the Ursulines have always been known to educate themselves, share their knowledge, and provide insights from their experience.

Gleeson has met with other churches and organizations that requested help as they started their processes of sponsoring Syrian refugees. She told them not to worry about receiving enough donations in terms of furniture, clothing, or funding.

"You don't have to think about if this is going to be a big struggle; it won't be. Those are the easy parts," she said.

Gleeson did warn new sponsoring groups that the government paperwork would be difficult, encouraging them to find a volunteer team member with "secretarial kind of skills" who could focus on every detail and "stick with it."

It's the stick-with-it-ness that El Khodr embraces.

"Christians, Jews and Muslims — we make one human family who believe in God, share the faith," El Khodr said. "This is where we believe whatever we can [do] to connect together, we are to do for the goodness of humanity." 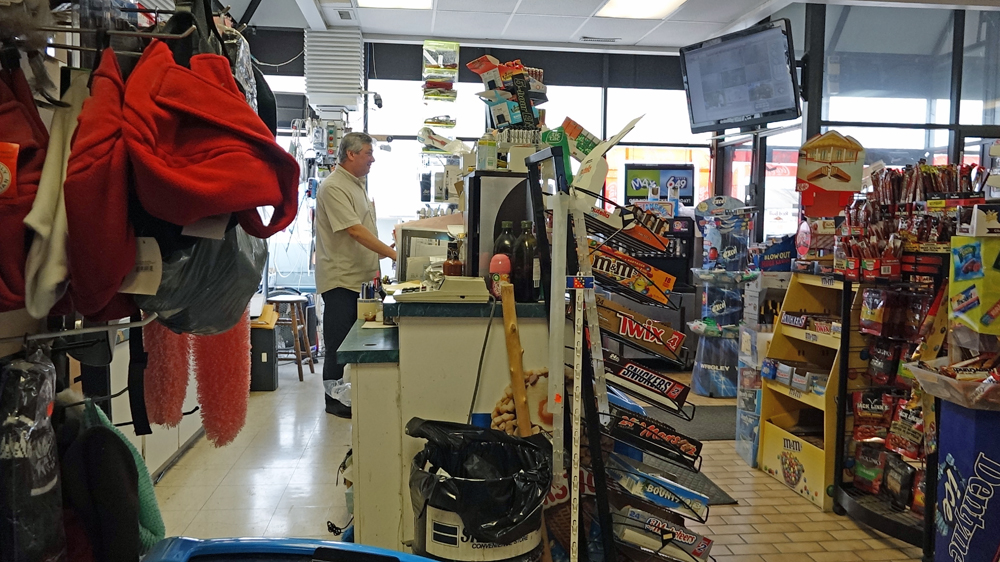 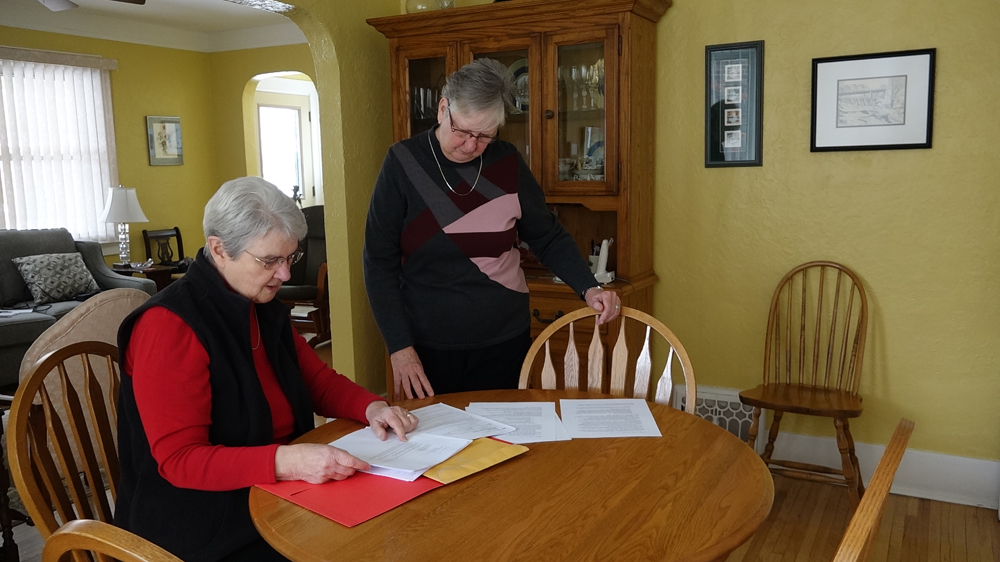 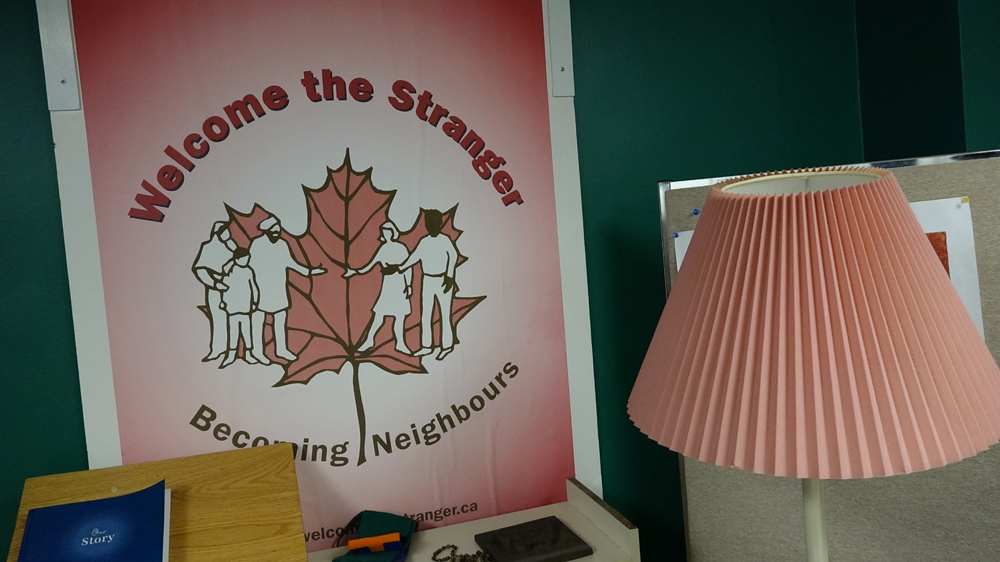 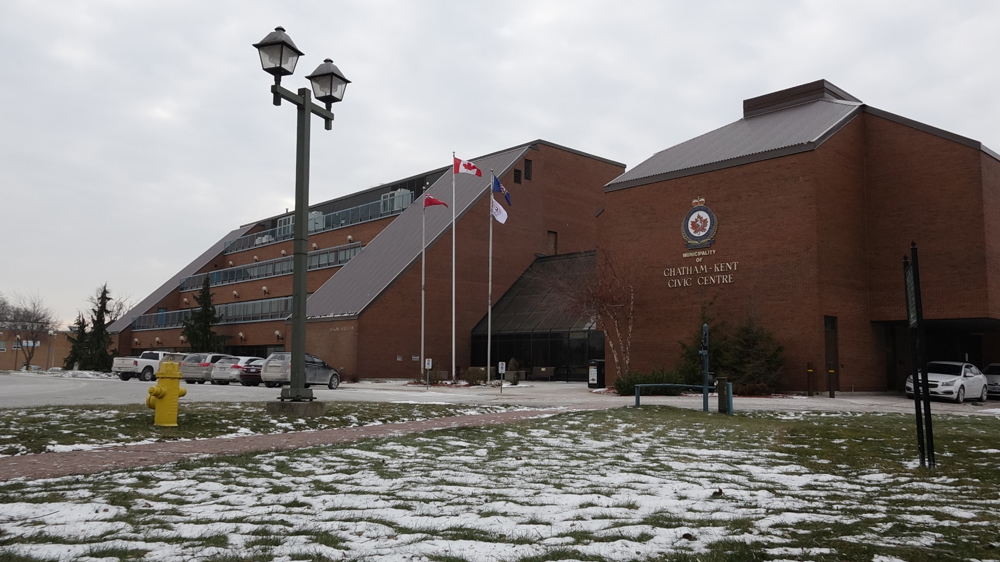 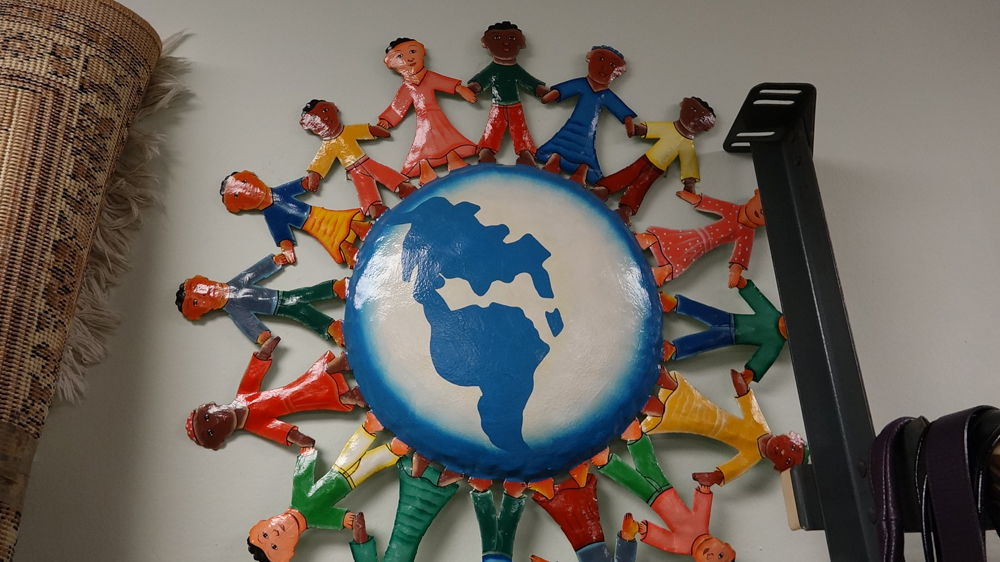 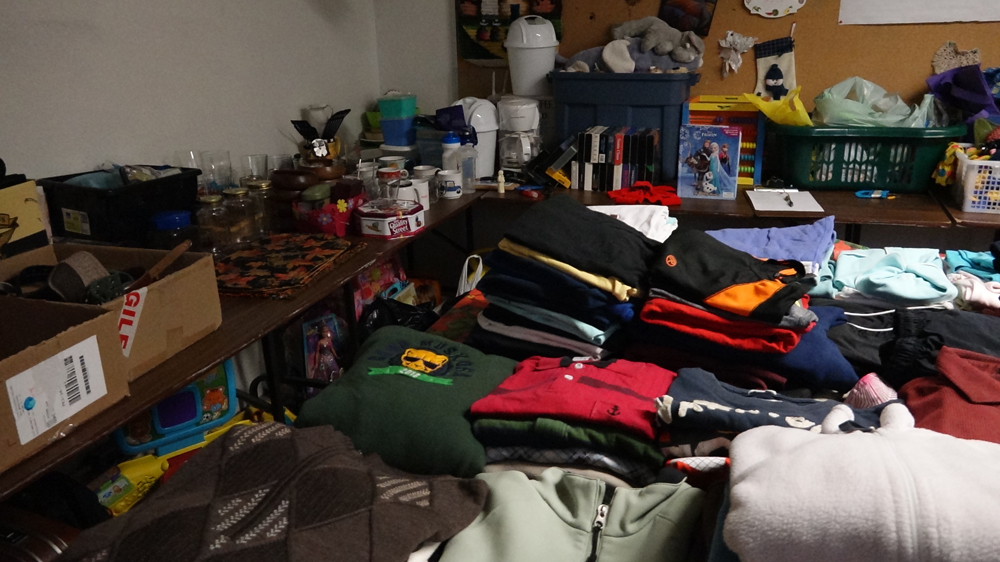 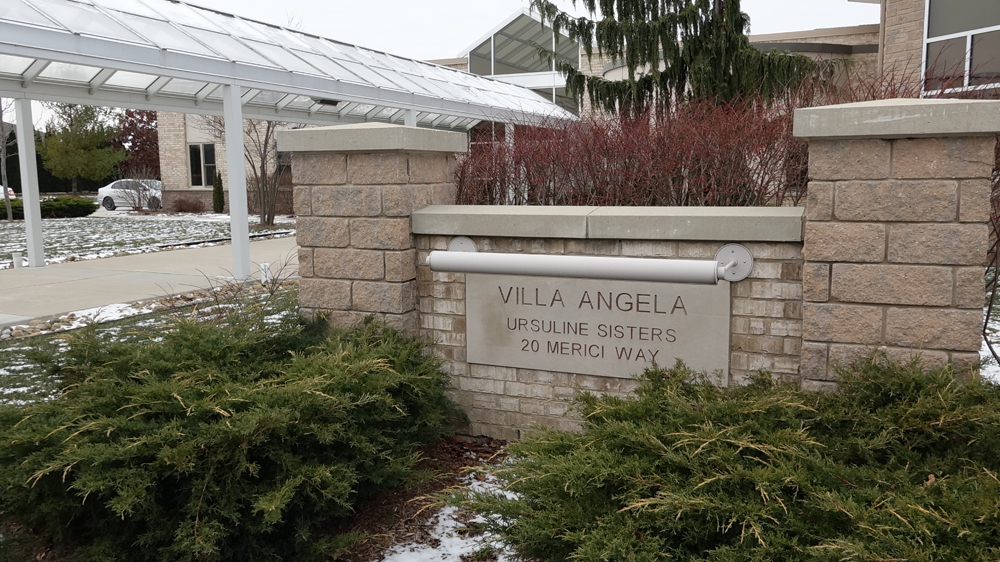