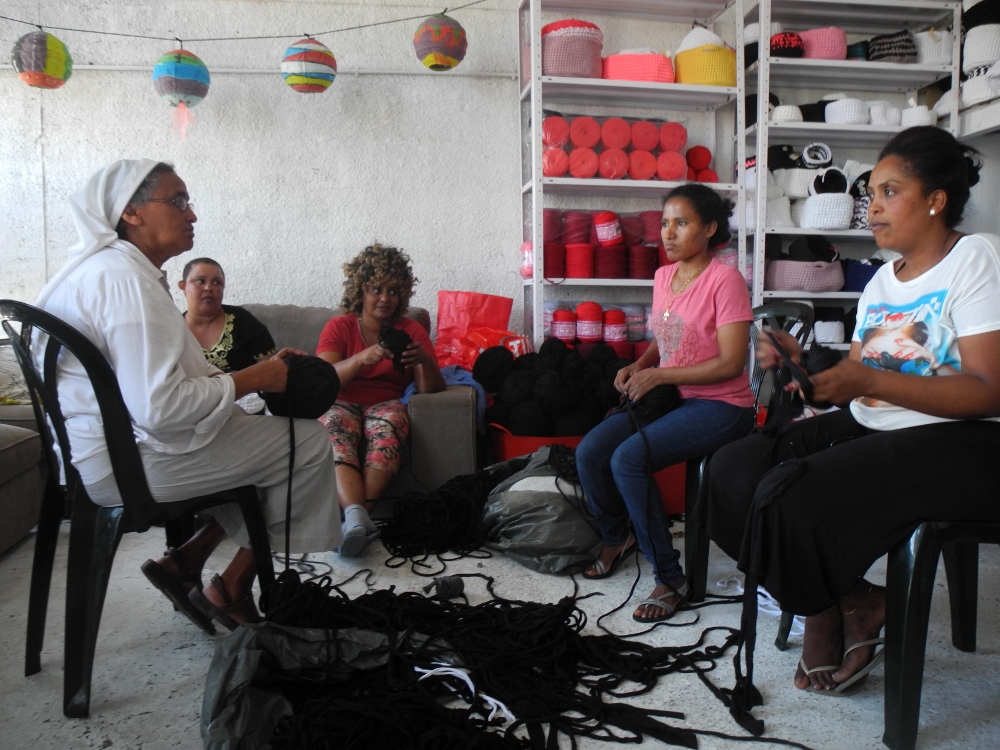 Sr. Azezet Kidane leads an informal therapy session while women crochet fabric baskets in a project started by the African Refugees Therapy Services. The comforting repetitiveness of crocheting and the safe, community atmosphere allows Azezet to raise difficult issues about the torture the women experienced on their way to Israel. (Melanie Lidman)

Tel Aviv, Israel — The first clue was the rapid growth in requests for abortions. Then doctors began noticing strange wounds on both male and female refugees who fled to Tel Aviv from Eritrea and Sudan – burns, evidence of beatings with chains, hands and feet beaten so badly the patients could barely move them. Starting in 2010, doctors at the non-profit Physicians for Human Rights’ Open Clinic in Tel Aviv, which serves undocumented residents, were puzzled by these strange wounds and abortion requests, so they turned to Sr. Azezet Habtezghi Kidane of Eritrea, a member of the Comboni Sisters who had just started volunteering at the Open Clinic. Kidane had spent almost 20 years as a nurse in Sudan and Ethiopia.

“When I started to volunteer, the doctor in charge said to me, ‘there are so many unexplained things,’” recalled Sr. Aziza, as she is known to her many friends. “Once 250 women came in all around the same time asking for abortions. Doctors saw bruises, burns, scars, and no one spoke Hebrew. So the doctors asked me, could you do an interview with them to figure out what happened on the road [to Israel]?”

Since 2006, large waves of refugees fleeing from brutal regimes in Eritrea, Sudan and Ethiopia have made their way to Israel, surviving harrowing journeys with smugglers in harsh desert conditions. Altogether, there are approximately 55,000 African asylum seekers in Israel, 35,000 of whom are from Eritrea, according to the African Refugee Development Center.

Their journey to Israel, though difficult, was previously a straightforward smuggling case. People fleeing their home would make their way to Cairo, by foot or other transportation, and then pay money to smugglers, often Bedouins, a nomadic tribe in Egypt’s Sinai desert, to transport them to the border with Israel.

But in 2010, the average price of smuggling to Israel skyrocketed from $1,500 to $3,000 and then to $10,000. As the Arab Spring raged in northern Africa, Egypt’s military lost control of the Sinai, and it became a lawless area. Countries sealed their borders as the political situation deteriorated further, leaving refugees with fewer routes and smugglers more opportunities to extort their victims.

The smugglers realized by kidnapping and torturing the victims, they could force the victims’ families to pay huge ransoms. As the stories spilled out of the refugees of sexual and physical torture, forced starvation and dehydration – awful stories that inspire questions in the basic goodness of the human spirit –Kidane had trouble believing what refugees told her. The stories were too horrible, too graphic, too unimaginable. But then she started hearing the same stories from different people.

In one group, 65 people set out for Israel and only five survived. She could not believe this number until she met two people who told her the same story.

Kidane began building a database documenting the instances of torture camps for Physicians for Human Rights, the Israeli NGO running Open Clinic, which also deals with political rights for minority populations in Israel. For two and a half years, two days a week, she would sit in a small office in their Open Clinic and hear testimony from the depths of the human abyss. She took testimony from up to ten people a day, speaking with a total of 1,500 African refugees. Half of the refugees who gave testimony were victims of torture camps.

There are 5,000-7,000 refugees in Israel who went through torture camps in Sinai, according to Elisheva Milikowsky,  director of migrant and asylum seekers at Physicians for Human Rights. From their research, the group believes a total of 25,000-30,000 people passed through the Sinai camp. Those who did not make it to Israel were either killed and buried in unmarked, mass graves, or released in Egypt or other places in northern Africa.

KIdane learned to interpret the testimony she heard: refugees were forthcoming about physical torture they’d experienced, but refused to talk about sexual abuse. “Other people in my group were sexually abused, but not me,” was the code for someone who had suffered rape or humiliating sexual acts.

The smugglers had unfortunately alighted on an easy group to oppress. These refugees fled from their home countries, mainly Eritrea, to escape brutal dictatorships where they had no freedom. Even after they escaped to a new country in Israel or Europe, they were undocumented migrants with no status and no voice. So when the torture camps started, there was nowhere for them to turn but to each other.

In the documentary movie “Sounds of Torture” Israeli  filmmaker Keren Shayo shows buildings in Sinai just over the border with Israel which are believed to be the torture camps. Smugglers would bring refugees trying to get to Israel to these buildings for anywhere from a few weeks to a few months while trying to get their families to pay ransom. 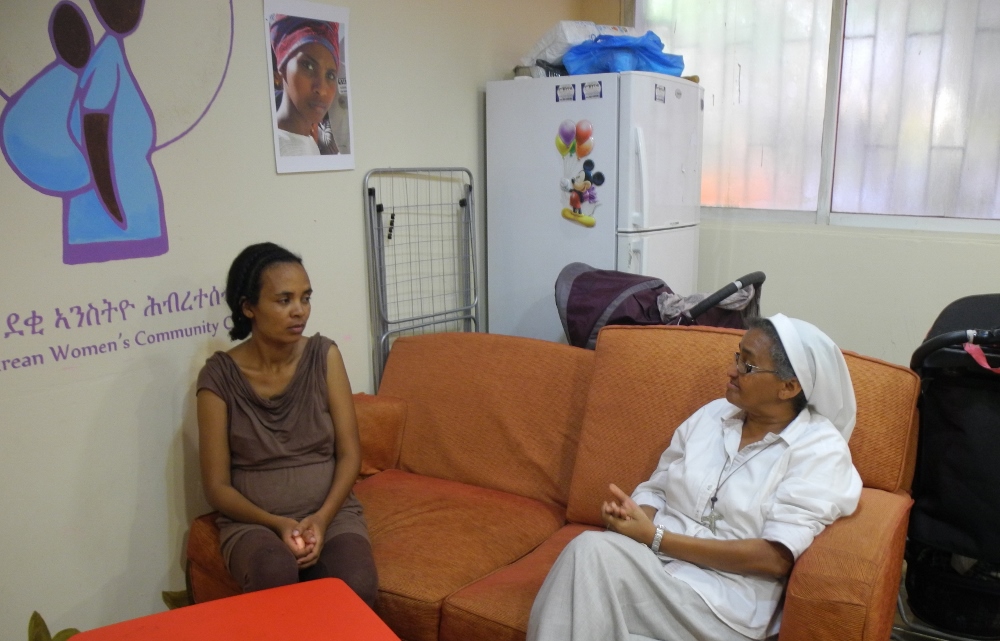 The buildings were so close to the border with Israel that the smugglers would give the victims Israeli cell phones. Then they would force the victims to call family members who had previously escaped to Israel, or those still in Eritrea. The smugglers tortured the victims while they were on the phone with their families begging for money, so their family could hear the torture as well. Smugglers demanded sums of $25,000 to $30,000, sometimes as high as $50,000.

Phyicians for Human Rights gathered the information from Kidane’s database and wrote reports which they submitted to Israeli authorities, the U.S. State Department, the European Union, and the United Nations. It was the first time anyone had documented the existence of the camps in the Sinai targeting refugees, and the reports gained international attention.

In June 2012, Hilary Clinton, then Secretary of State, honored Kidane with a Trafficking in Persons Report Hero award for helping expose the existence of the camps.

Kidane modestly brushes off the honor. “What is the use of an award,” she asked, “if people are suffering worse now?”

In 2013, Israel finished a fence along the 150-mile-long border with Egypt, making smuggling to Israel almost impossible. In the first year after its completion, the number of African migrants entering Israel dropped from more 10,000 to 43.

So while Kidane is not dealing with any new victims of torture in Israel, she’s slowly learning how to offer healing to a wounded community.

“The effect of human trafficking is not only about the torture, it doesn’t end there,” Kidane said recently at the Eritrean Women’s Community Center in Tel Aviv, where she counsels victims of torture.

“If there is a married couple and the husband left to come to Israel earlier, and the woman was stuck in the camp and she was tortured, now he doesn’t understand her.

“Maybe she is still angry at him because he didn’t pay quickly enough – things like that brought problems between families – Kidane continued. “It also created a lot of problems between more distant family: I paid for your cousin, why can’t you help me with mine?

“Or, there were instances where men would say: Pay $25,000 to bring my sister out from the torture camp and you can marry her.” The result is a lot of domestic violence, especially if the woman arrives pregnant from being raped in the camps.

Some Israeli NGOs are trying to provide counseling, but there is no word in Tigrinya, the language of Eritrea and northern Ethiopia, for psychotherapy. Refugees didn’t understand why a complete stranger wanted them to sit in a room and speak about themselves for an hour. One-on-one therapy just wasn’t part of their culture.

So Kidane looked for alternative ways to reach the women. The African Refugee Therapy Service started a basket weaving cooperative called Kuchinate, a Tigrinya word meaning “sew” or “crochet.” The women gather twice a week to create colorful cloth baskets they sell at craft markets around Tel Aviv. As their crochet needles dart between the stitches, Kidane gently brings up difficult issues. Hands busy, feeling safe among other women who went through the same journey, the women discuss everything from health concerns to family issues to raising children and recovering from the effects of torture.

Kidane provides cultural and pastoral knowledge, while Dr. Diddy Mymin Kahn, an Israeli therapist with the African Refugee Development Center, provides the professional psychological guidance. “We call it therapy without borders,” explained Kahn. “It’s sitting on someone’s bed and drinking coffee for a long time so they can gain trust with a white stranger . . . . We help to try to build the women’s resilience in a positive way without focusing too much on the trauma.”

Kidane knows the therapy work is a small salve for a deeply wounded community. Despite her phone ringing with requests for assistance or advice from members of the Eritrean community, there are only so many people she can reach.

“I don’t have solutions for what is happening to them,” she said as she walked through South Tel Aviv from the Eritrean Women’s Community Center to the Open Clinic. She paused regularly to greet someone, though each warm embrace was tempered by her knowledge of the difficulties that person endured on the journey to Tel Aviv.

“My only solution is to do what I can, to bring peace and trust again,” she said. “I want them to trust themselves again, trust God, trust other human beings, because these people were mistreated by other human beings. I want them to regain this strength, not to stop on this darkness, not to stop on this fear and mistrust. To help them believe again in themselves, that there is a future, and they will do some great things in their lives.” 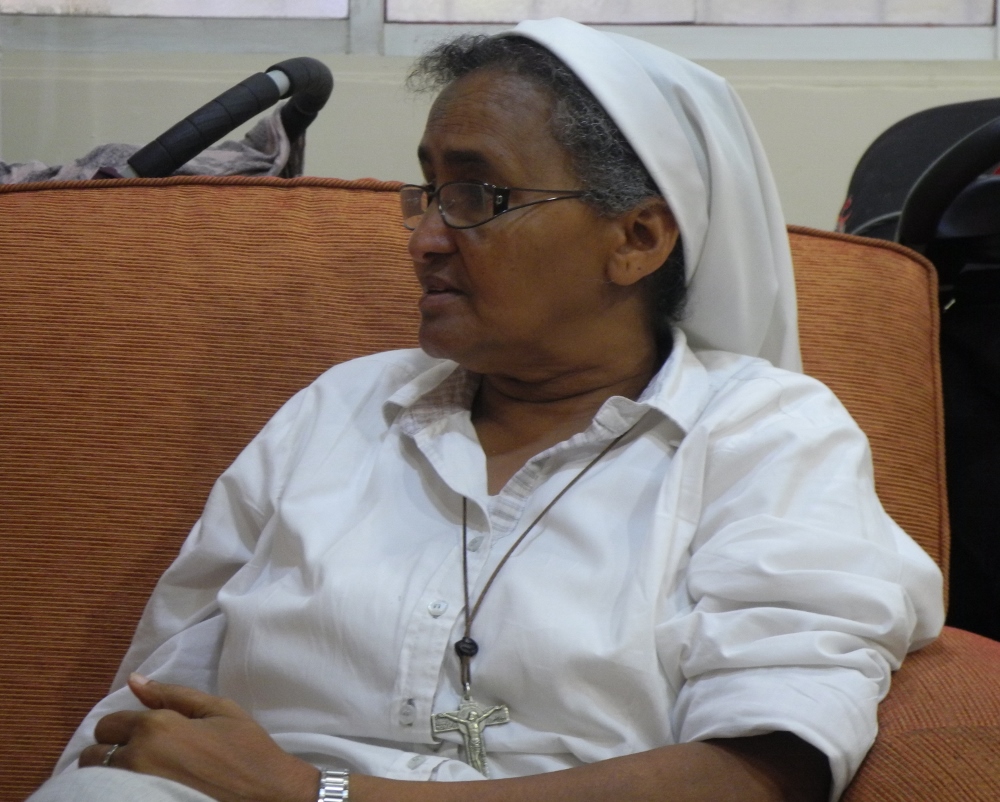 Behold the place: Sisters teach Catholicism from Jewish perspective in heart of Jerusalem