Teresa Bui Thi Luu spends one hour a day "talking with Jesus" in front of the eucharistic host in her home church in Pleiku City, in Vietnam's Central Highlands.

"I believe Jesus in the Eucharist accompanies and blesses my family," said the woman in her 60s from Thang Thien Catholic Church.

Luu, a former fish trader, said her Buddhist mother-in-law died in 2017 and the funeral was held on the same day as her daughter's already-scheduled wedding. Because her late husband was the eldest son, by tradition Luu had to take responsibility for helping arrange the Buddhist funeral.

"I prayed to Jesus to help me to hold well the two events and he answered me. I had enough time to attend my daughter's wedding at the church after the funeral," she said.

She said her in-laws appreciated her careful arrangements for the funeral and the wedding. Many of her co-members in the local Eucharistic Adoration Association also attended the events.

Sr. Maria Nguyen Thi Tuyet Lan said Servants of the Blessed Sacrament sisters founded the eucharistic association in 2005 at their motherhouse based in Bien Hoa City, in the southern province of Dong Nai. Lan, who has been in charge of the association since it was established, said it at first had nine members but now draws 1,041 members from seven parishes and nine mission stations in Pleiku City. Members include Kinh majority and various ethnic minority groups.

The association has 8,000 members throughout Vietnam.

Lan, about 60, said the association aims to help promote devotion to the Eucharist, the "great mystery of faith," to live by it and to bear witness to it.

The Servants of the Blessed Sacrament work in eight of 26 dioceses in the country.

Luu said her husband admired her good qualities and faith life, and embraced Catholicism before his death nine years ago.

She said her children also adore Jesus in the Eucharist and try to live a good life to persuade their father's relatives to embrace Catholicism.

She said she is grateful to the association that has helped improve her spiritual life since she joined in 2009.

Lan, the former head of the community that was established in Pleiku in 2000, said association members gather to attend eucharistic adoration on the first Thursday of the month at the nuns' convent, and hold weekly sessions at churches and chapels on other Thursdays.

Many eucharistic adorers collect in groups to worship the Eucharist every day. At some parishes, they take turns to adore the Blessed Sacrament in one-hour shifts around the clock on Sundays.

"Many people try to visit the Eucharist at churches on their way to return home after working on the farm in the evening," she said. The association also attracts members from other Catholic associations — Legion of Mary, Couples for Christ, choirs and catechists.

She said candidates must reach 18 years old and follow a period of probation from six months to one year before becoming full members.

The sister said association members cooperate with nuns to reconcile couples married outside the church back into the church, to bring nonpracticing Catholics back to faith life, to teach catechism to those who want to embrace Catholicism, and to put children with disabilities under the nuns' care at the convent.

"It is important that they feel peace at their soul and regularly attend Mass and receive the Eucharist," Trinh said.

She said they visit members who are ill or have been injured in road accidents, or need consoling after a death in the family. "We attend funerals of dead members and pray for them on a monthly and yearly basis," she said.

They also bring more people into the association so they, too, can benefit from its impact.

Trinh said Tho, an association member from Thang Thien Parish, died last year, and her husband and children did not want other members to visit their home to pray for her. Because they are Communist Party members and work for government agencies, they feared that their jobs would be compromised.

However, the nun said, other members bravely came to offer incense to Tho, said prayers and sang hymns. Tho's relatives were moved by their actions and have developed an interest in Catholicism.

Petrus Ksor Juh, a Jarai ethnic member from Plei Chuet Parish, said he entered the association a few years ago at Lan's invitation.

"We feel God's love in us and get closer to God while attending eucharistic adoration sessions," the man in his 60s said, adding that his wife also joined the association.

He said all local members who work hard on farms try to attend eucharistic adoration for one hour at the church on Sunday evenings. 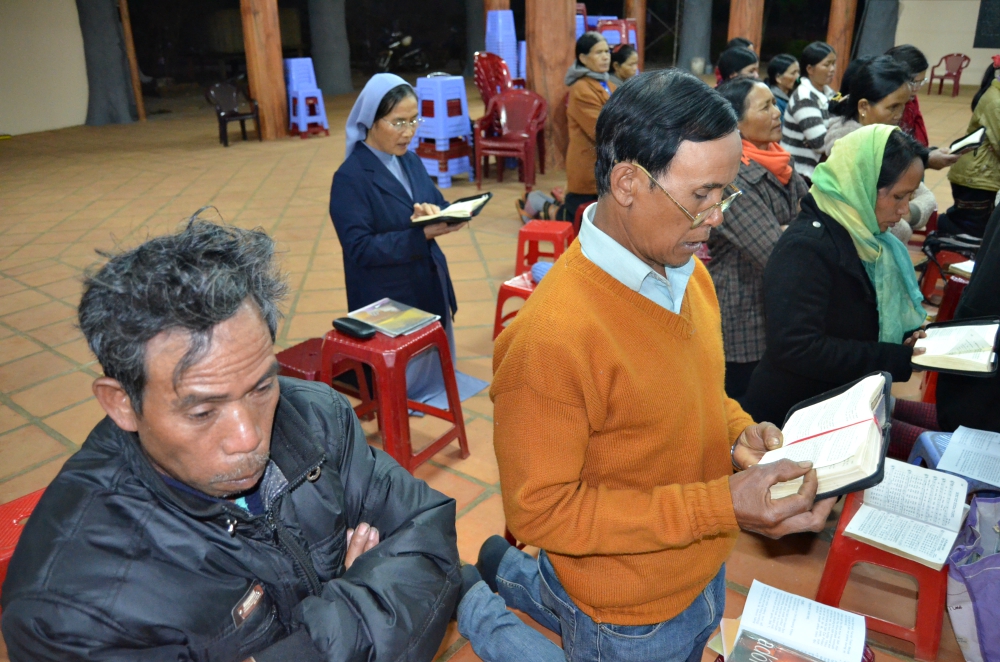 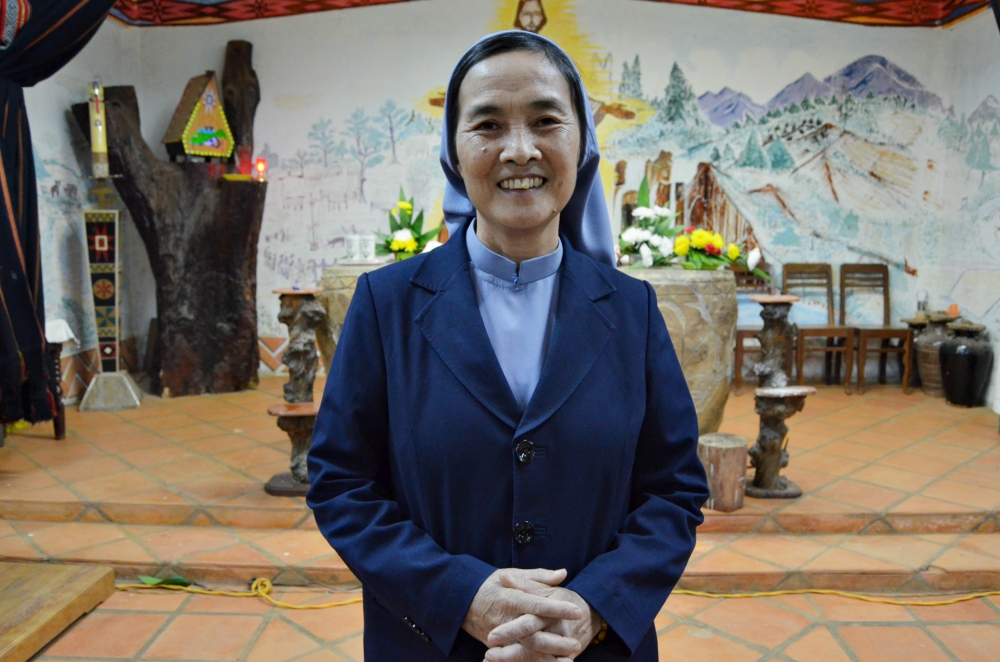 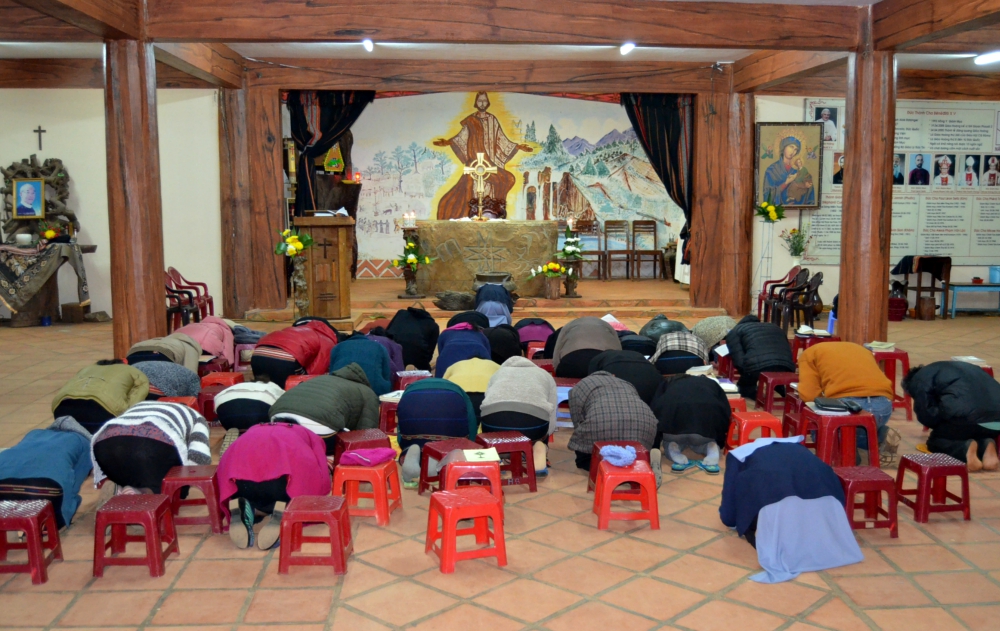 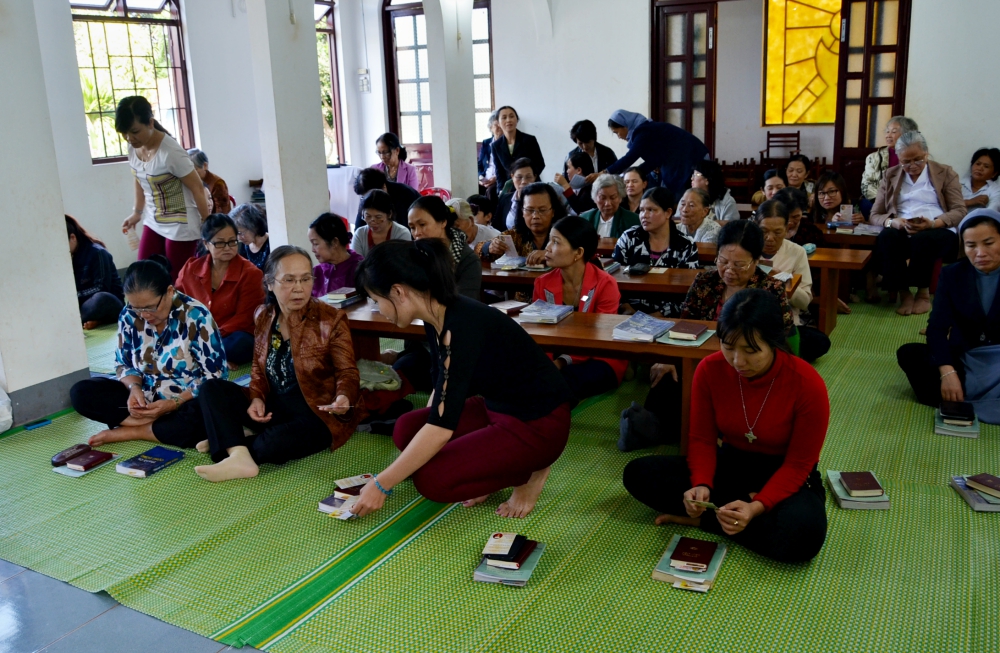