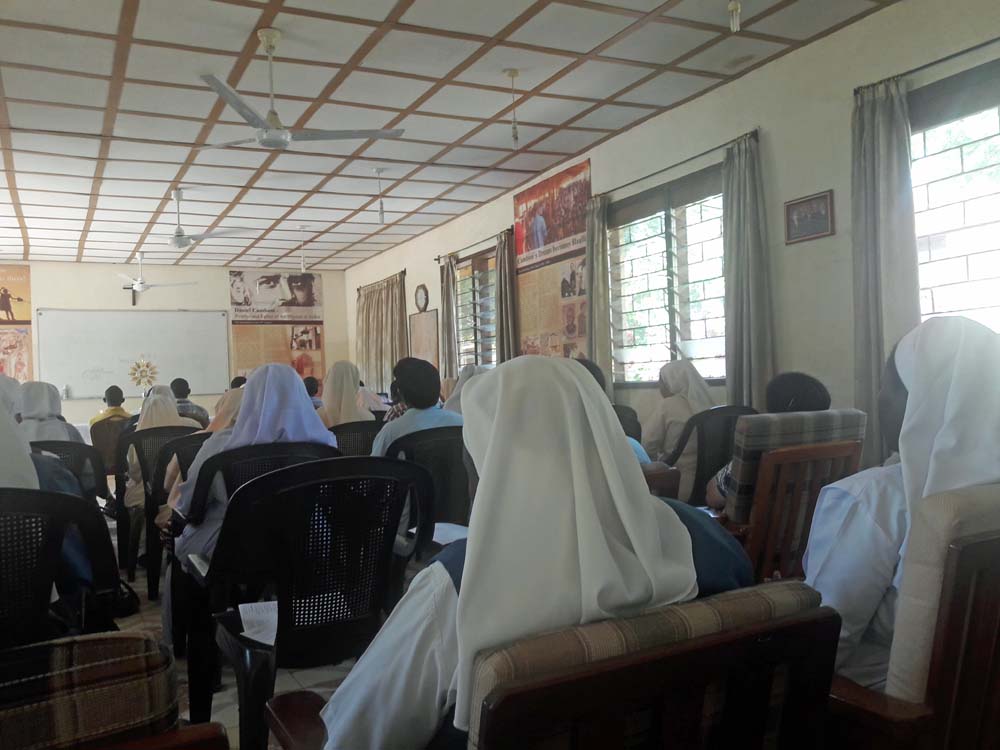 The three-hour Recollection service is a moment for religious serving in the Archdiocese of Juba, South Sudan, to recall and reflect on the work of the past month. (GSR photo / Chris Herlinger)

Juba, South Sudan — Walk with me, O my Lord,
Through the darkest night and brightest day;
Be at my side, O Lord,
Hold my hand and guide me on my way.

Sometimes the road seems long, my energy is spent,
Then Lord, I think of you, and I am given strength.

The entrance procession of a monthly Recollection service — a moment for religious serving in the Archdiocese of Juba, South Sudan, to recall and reflect on the work of the past month — wasn't just an invocation.

The spoken rite came from lived experience, and everyone present knew why: South Sudan's religious are serving in the midst of an ongoing humanitarian crisis and civil war. They know the need for quiet, solidarity and renewal.

Many attending the recent service on the campus of the Comboni Missionaries in Juba have themselves experienced some kind of trauma. Helping those who have lost family members to war. Fleeing shelling or bombing. In some cases, facing soldiers who have harassed them and members of their order.

Time to be together, prayer, community and moments of solitude — all are essential, and the sisters practice these regularly and faithfully. But the monthly Recollection service, held the last Saturday of each month, is a particularly welcome respite from long days and constant challenges.

The three-hour service is paced slowly, with stretches of quiet interspersed between prayers and singing. 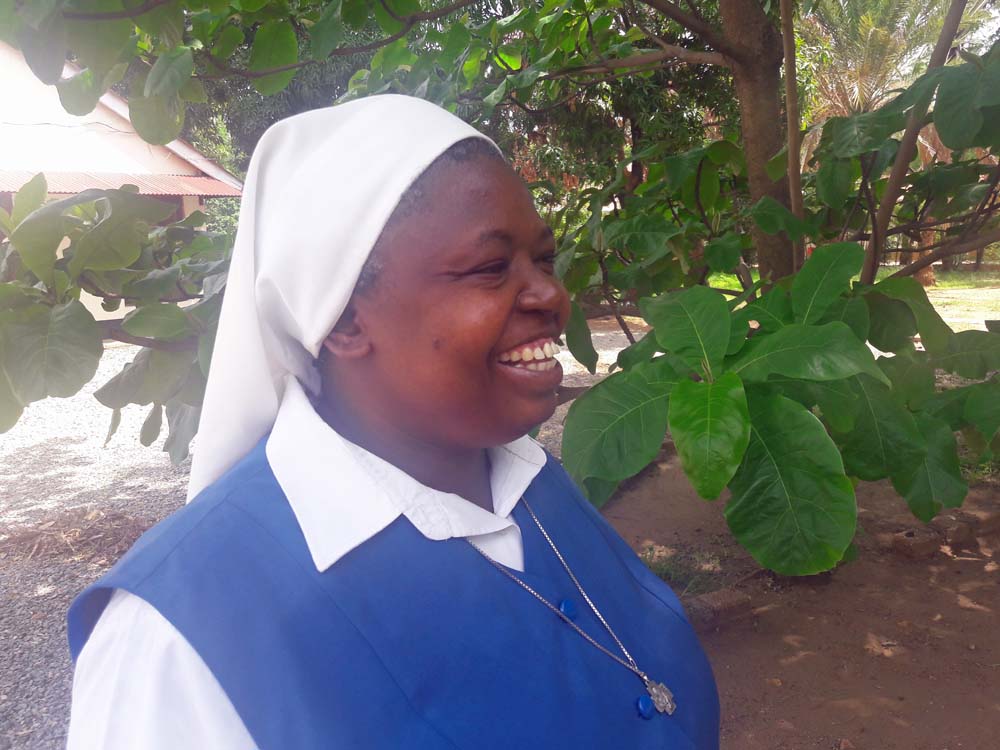 "After one month's work, it's a break," said Pauline Sr. Joyce Moraa, a Kenyan member of the Daughters of St. Paul. "The situation is hard. The place is hard. You can give and give until there is nothing more to give."

Veterans of the country know that all too well. In an interview with Global Sisters Report, Italian Comboni Sr. Elena Balatti, who has worked in South Sudan for 16 years, spoke of South Sudan's hope and vitality. But she did not underplay South Sudan's considerable frustrations and difficulties, including poor infrastructure, that were present even before the civil war began in 2013.

The current war — a conflict of warring political factions — is occurring in an impoverished country that had not yet recovered from a previous war that resulted in South Sudan's independence from Sudan in 2011. That two-decades-old war left approximately 1.5 million dead, according to BBC estimates, and a country facing extreme devastation. The current war, the Council on Foreign Relations says, has claimed more than 50,000 lives.

"Anything can disappear," Balatti said of the war. A school painstakingly built by a congregation or community can be looted then destroyed.

"It's a very long journey" to a resolution to the country's problems, she said. "We'd like it to be shorter. But it's a long journey."

Balatti said religious are "made for what is joyful: peace, happiness, and good relationships. That's where we thrive." In contrast, the current situation "can be very tough, very tough. You don't wish for this to continue." 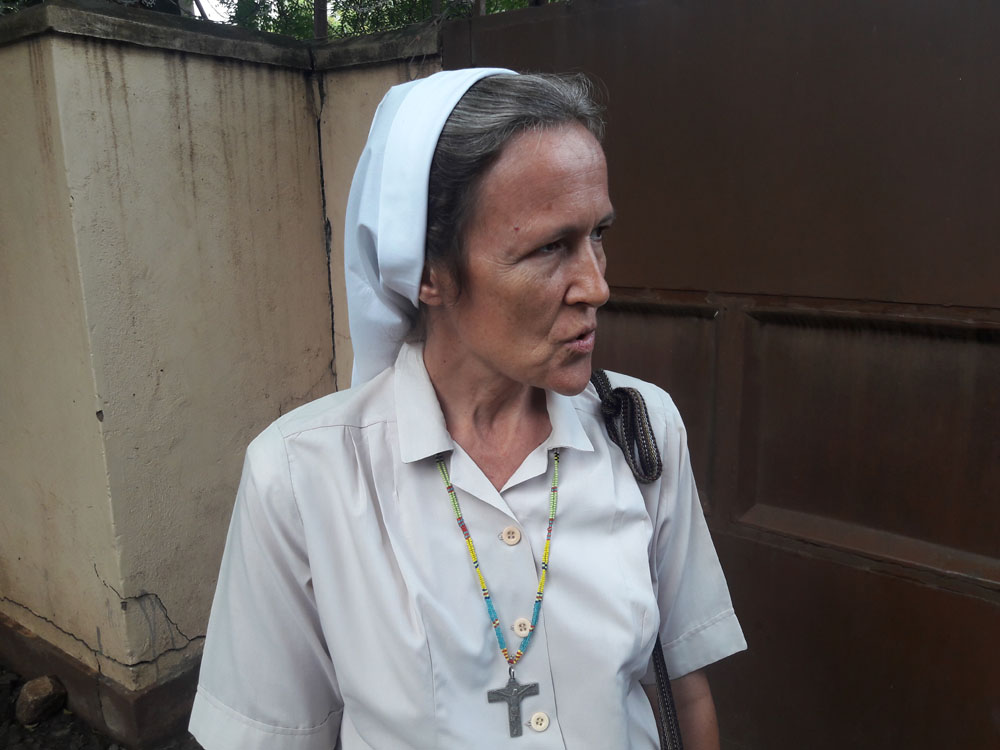 Some in the Catholic Church, like Auxiliary Bishop Santo Loku Pio Doggale of Juba, say the national government is intimidating the church and other institutions in South Sudan.

"In South Sudan, everybody is under intimidation, and so fear is instilled into people," he said. "It is the church that tries to give some voice, so they [the government] are not comfortable about that. That is why they also get frustrated when the voice of the church continues in many ways to be aloud and strong on the suffering of the people."

Though firm statistics about religious affiliation are difficult to come by, it is believed that about a third of South Sudanese are Roman Catholics.

Religious by and large say they must tread carefully about what they say publicly, with many counseling that patience is needed. But they also say they must continue ministering and witnessing to a population that depends on the church for succor, spiritual support and a sense of inspiration and hope.

Sr. Anne Kiragu knows about all of these things. The Kenyan superior for the small Daughters of St. Paul community in Juba that includes Moraa has been in South Sudan since 2012. She is a beloved figure among her fellow sisters, who admire her commitment, sense of humor and her grit.

Her 15- to 18-hour workdays include managing a local Pauline bookstore, checking in on the sick and infirm, distributing food and medicines when needed, and coordinating with members of other religious on shared pastoral projects.

Troubleshooting with local officials is also part of her work. 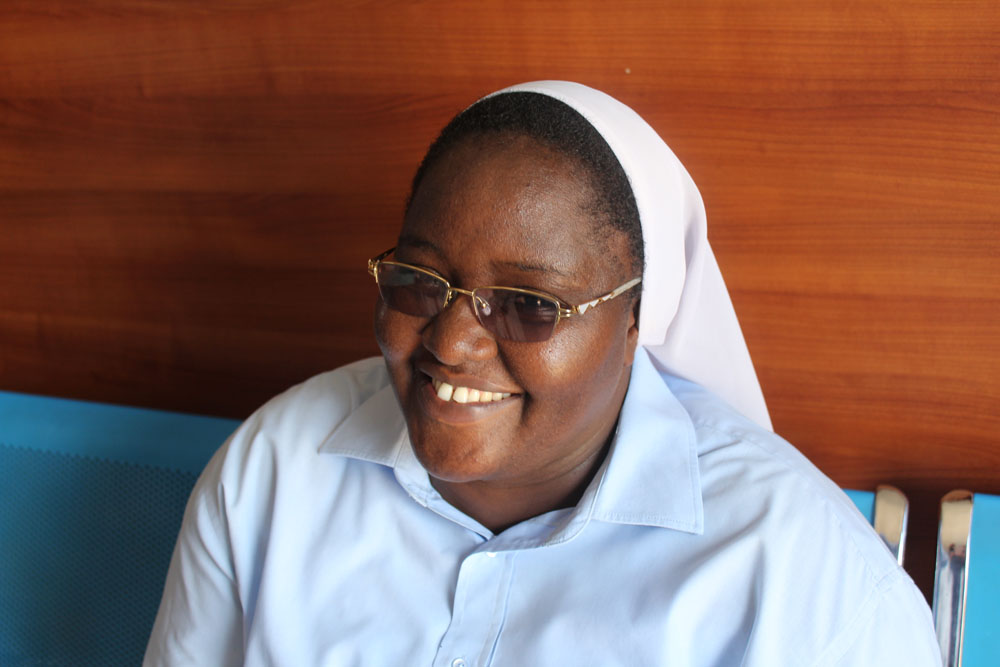 "I'm happy with my vocation as a religious, but I don't allow people to mess around with my life," Kiragu said. "If there are issues to deal with, we sit down to dialogue."

That hint of steel has a spiritual undergirding, and Kiragu said that can result in a certain amount of needed courage. "If you're not courageous, everything would be difficult," she said. "Certain situations help you develop courage."

And indeed, the experience of working in such a difficult environment "can make you a better religious," she said. "The religious life is beautiful. The work in South Sudan is more important than ever. It's more needed than ever."

But sometimes, Kiragu said, it feels as if "the society is too broken." As a result, the religious themselves can feel tired, worn out, frustrated. No one working in South Sudan hasn't experienced those feelings, she said.

Many have experienced fright and trauma themselves.

Sr. Jeny Maila, a program coordinator for the Society of Daughters of Mary Immaculate, also known as the DMI sisters, an India-based congregation, recalled a round of artillery and shelling between battalions in July 2016.

Some 250 residents came to the sisters' compound on the outskirts of Juba seeking protection. At one point, the fighting became so bad, Maila said, "We feared our place was a target, and we didn't know whether to stay or to run." Ultimately, the sisters and congregational leaders from India decided it was best to stay rather than flee. Within days, the fighting ended. 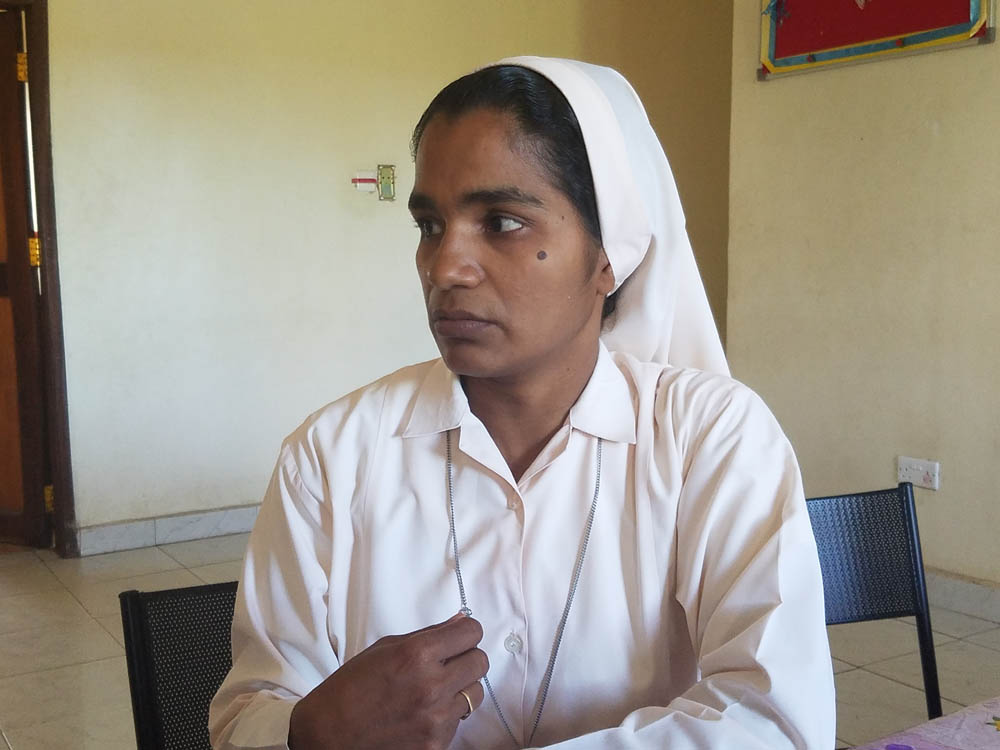 "That was real trauma," she said. "The fear was real."

The decision to stay came after prayer and the feeling that fleeing would send a wrong signal to the communities the sisters serve.

"We have to expect the good so that the good comes," Maila said. "We take everything in prayer. God is the one working on behalf of us. It's God's work, not our work."

That's a common refrain among the sisters in South Sudan that is expressed in the solidarity and unity the religious feel.

"We're very close," Kiragu said of the congregations. "We're very bound together. We really support each other."

The Saturday Recollection service proved that: Sisters, brothers and priests from different congregations mixed easily, both during the service and after. The time after the service was marked by easy banter: to catch up, laugh, exchange the latest news and gossip.

One of those attending was Italian Little Apostles of Charity Sr. Carla Magnaghi, 75, who has been in South Sudan for 15 years. She oversees a center for disabled children in Juba and said the monthly services are a balm. Quiet, rest and reflection are important in such a stressful environment, she said.

"When you work, work, work, and you're not taking care of yourself as a person, you lose the reason why you're here. And it's good to be reminded — the work is not for us, but for Jesus," she said. 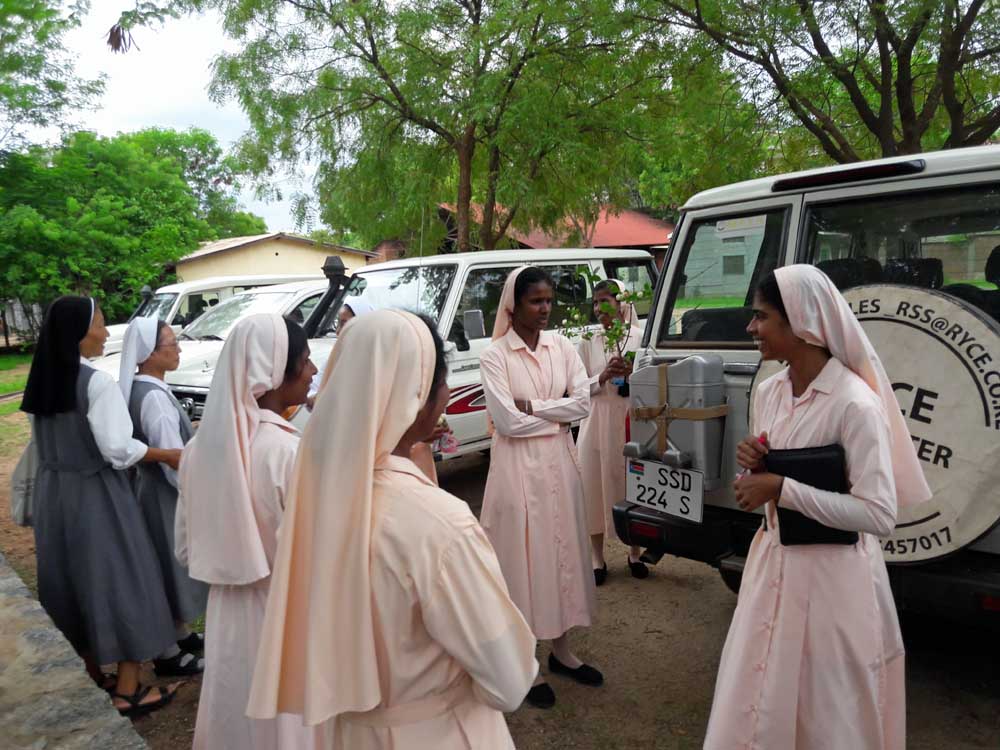 The time after the service is marked by easy banter: to catch up, laugh, exchange the latest news and gossip. Here, sisters from India working in South Sudan gather. (GSR photo / Chris Herlinger)

Moraa agreed, citing a quiet she believes is sacred.

"It's like a day of resting, to be revived and return to the ministry," she said during a break of the Recollection service on the last Saturday in May. "It is good to have this quiet time with God so we can return, refreshed, energized, and re-enter the work. The balance is needed. The needs can steal that silence, the time of silence."

She paused, thinking of the demands, pressures and challenges a war environment puts on everybody in South Sudan.

"The needs are always there, always on your mind," she said. "But you need to embrace the quiet." 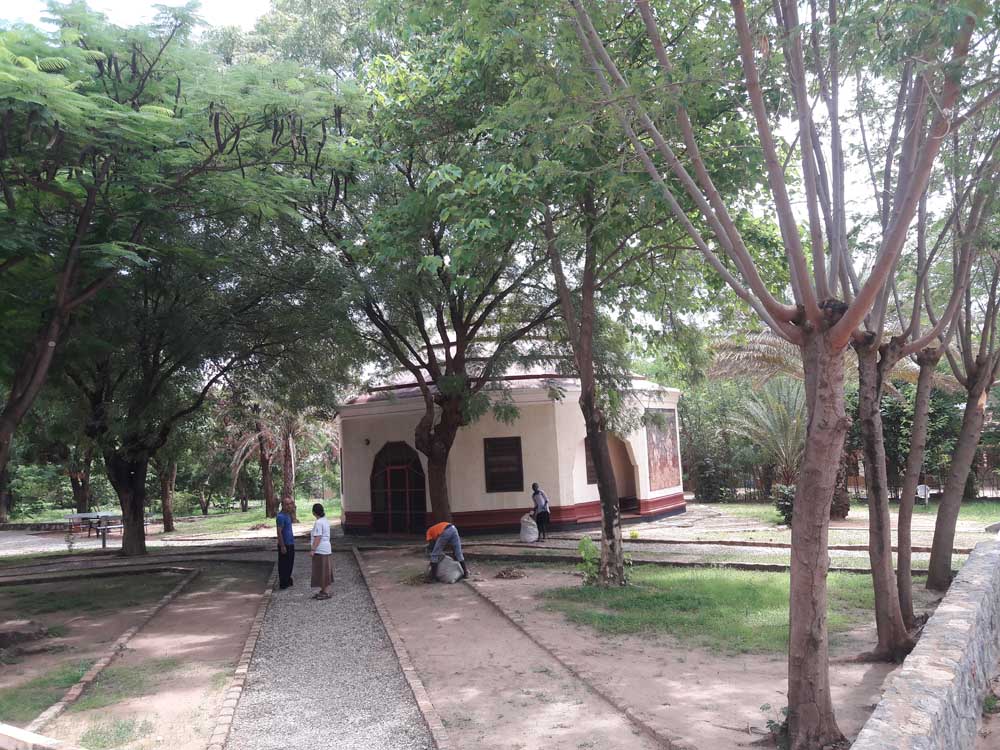 The monthly Recollection service for religious in Juba, South Sudan, is held on the campus of the Comboni Missionaries. (GSR photo / Chris Herlinger)

In civil war, soldiers are the wild cards -- and tough to access