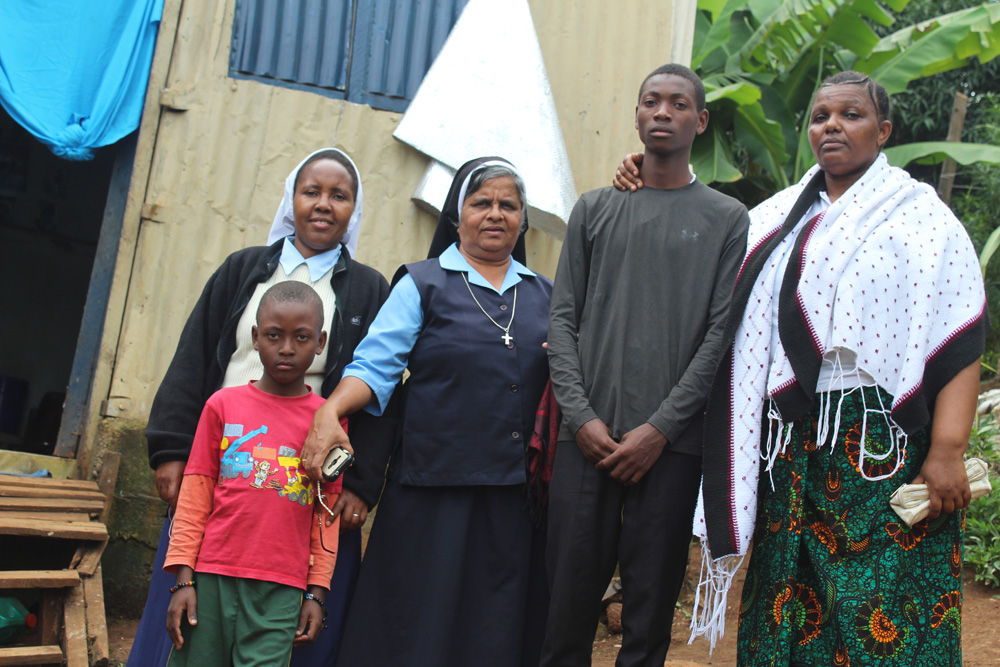 Paulina Masawe, right, who was pressured by her husband to relinquish her children to traffickers, and Stanley Joakim, second from right, stand with Catholic sisters and Stanley's younger brother in Arusha, Tanzania. Masawe and Stanley were helped by the sisters after becoming victims of human traffickers. (GSR photo / Doreen Ajiambo)

Arusha, Tanzania — Editor's note: Global Sisters Report is focusing on the efforts of sisters to end human trafficking as Talitha Kum, the international anti-trafficking network of religious, marks its 10th anniversary and launches its Nuns Healing Hearts campaign. The special series will run periodically through September, when Talitha Kum will hold its first general assembly. Since its founding in 2014, GSR has dedicated a section of its coverage to sisters who in various ways fight human trafficking. Read all of our coverage.

Stanley Joakim sat on his bed in a tiny single room in this northern town of Tanzania as he recalled his terrifying ordeal in May: undergoing torture by unknown people who had kidnapped him outside the school gate.

"They tortured and left me to die," said the 17-year-old as he broke down in tears. "They beat me up for three days without giving me water or any food. They told me either to give them money or they would sacrifice me."

The teenager, accompanied by his mother, wished to speak openly with Global Sisters Report in hopes his experience would spur government action against traffickers in his area.

Stanley, who was being trafficked for ransom, is among thousands of victims of human trafficking in the East African country. The report by the U.S. State Department's Office to Monitor and Combat Trafficking in Persons indicates that human trafficking is a lucrative business in Tanzania, with thousands of children finding themselves in slavery after falling prey to smugglers who lure them in or promise their families a better life.

Some trafficking victims in the area have suffered, not just beatings and maltreatment, but ritual mutilation or severed body parts intended for resale. Some have been murdered.

Stanley said he was kidnapped in the evening outside his school gate as he was waiting for his friend to accompany him home, after school closed for the summer holiday. A man on a motorbike approached him and offered him a ride home since he was going in the same direction, he said. Stanley eventually was persuaded to accept the ride.

On their way, another man on a motorbike, posing as a client, joined them and they sped away to an unknown location where they ordered Stanley to contact his parents to transfer $3,000 in Tanzanian shillings to their account before he could be released. However, Stanley told his abductors that his father had died and his family could not raise such a large amount of money.

"I was immediately sprayed with an unknown poisonous substance, leaving me unconscious," Stanley described to GSR in a low voice, his eyes moist. When he regained consciousness, he found he had been seriously wounded. "I was bleeding excessively. I tried to scream for help but my voice wasn't strong enough."

Stanley was rescued later that day by Sisters of Notre Dame and taken to a hospital for specialized treatment, after his abductors dumped him on the side of the road. The sisters had been working closely with the police to rescue victims of human trafficking in the region.

"[The abductors] thought they had killed me," said Stanley, still obviously in pain but recovering at home. "I felt lifeless. But I thank the sisters for coming to my rescue; otherwise I would have died due to severe bleeding."

Sr. Kellen Muthoni has been taking care of Stanley and other victims of human trafficking in the northern part of the country. She said the cases were widespread in the region and has warned residents against accepting free gifts or favors from strangers, as they may fall prey to being trafficked.

"Impoverished children from the rural interior remain most vulnerable to trafficking," according to the U.S. State Department 2019 Trafficking in Persons Report segment on Tanzania. 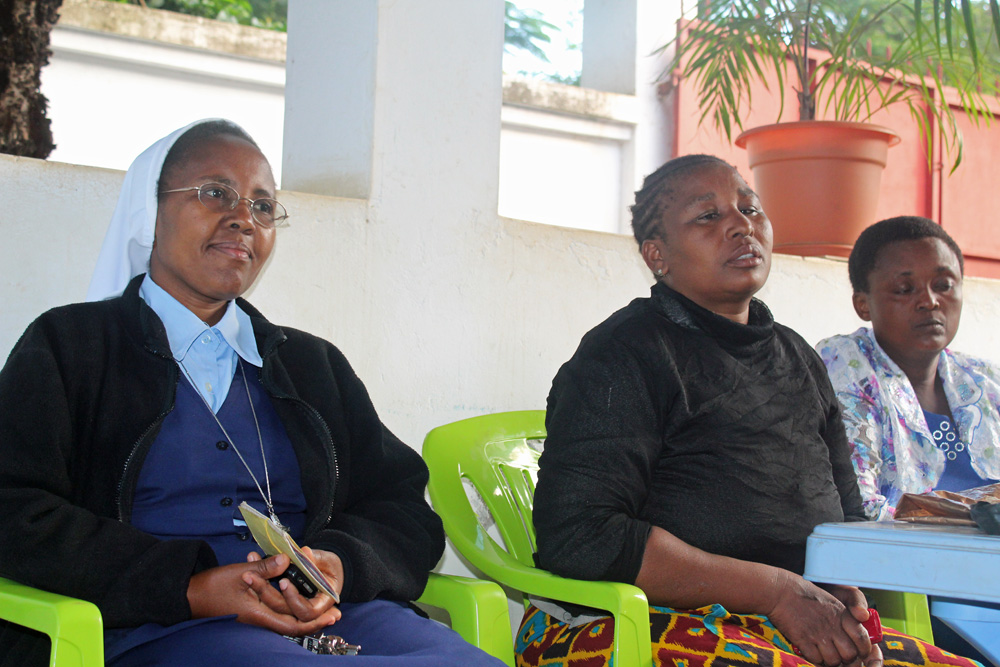 The Tanzania National Child Labour Survey of 2014 indicates that traffickers often target children and youths because they are more vulnerable to exploitation. The report shows that 131,741 children were engaged in domestic work in 2014, for example. However, the exact numbers of trafficked children are not available in Tanzania, since child trafficking is mostly hidden and victims often fear retaliation.

"We have witnessed very many cases where children abducted are usually killed for cult rituals or their parents are asked for a ransom," said Muthoni. "The worst thing is that most of the victims are unaware of what they get themselves into. They are innocent of the situation."

Muthoni said sometimes victims of human trafficking are lured by false promises of highly paid jobs and education, but end up being sexually abused, exploited as domestic workers, or forced to work in the fishing and mining sectors. In other cases, traffickers kidnap victims or use physical violence to control them and later demand ransom from their families, she added.

"Sometimes cheap can be expensive; you need to be careful before accepting anything from a stranger," Muthoni warned. "But, as religious women, we condemn trafficking because we proclaim the dignity of the human person and the sanctity of all human life."

And yet, Muthoni is hopeful because Catholic sisters from congregations across the country are playing a key role in the fight against human trafficking. 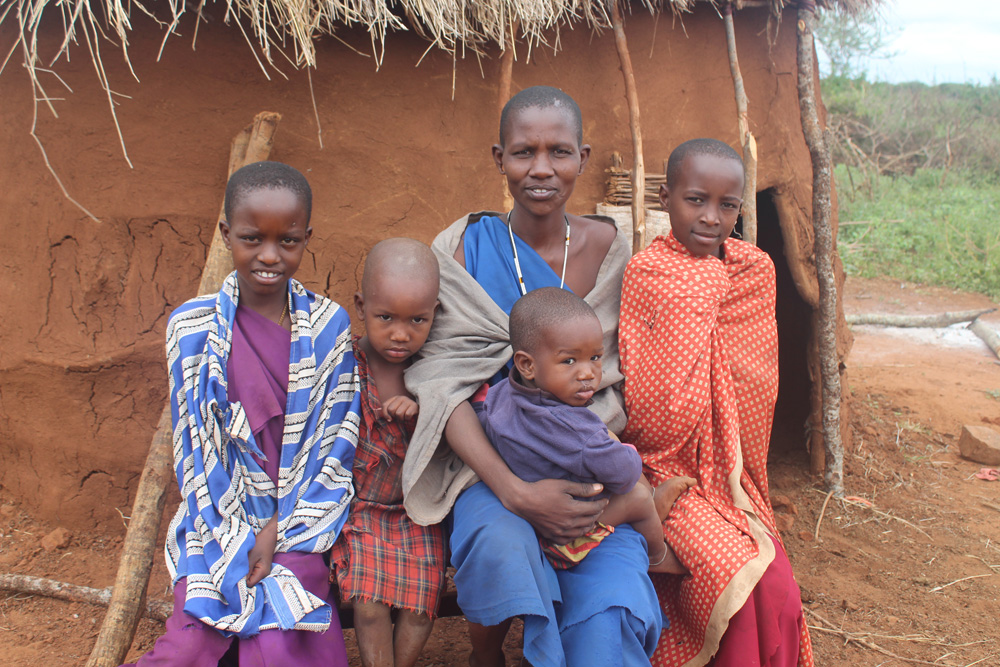 A majority of families in northern Tanzania are vigilant about protecting their children from trafficking risks. Here, a woman sits outside her hut with her children in June. (GSR photo / Doreen Ajiambo)

In April, Pope Francis urged participants at an international conference on human trafficking in Rome to fight the scourge of modern-day slavery, noting that it disfigures the humanity of the victim. The pope told members, including many women religious, who attended the conference to coordinate their initiative and work together with political and social actors.

"The numerous initiatives that place you in the front line in preventing trafficking, protecting survivors and prosecuting perpetrators are worthy of admiration," Francis said. "Much has been done and is being done, but there remains much yet to do."

Muthoni said they were working to raise the awareness as well as provide assistance to victims of trafficking. Every week, they visit villages and local churches to equip residents with information to help them tackle human traffickers. They also raise awareness about the crime, its nature, causes and damage to victims, she said.

The East African nation has been labeled as "a source, transit and destination country for men, women and children trafficked for the purposes of forced labor and sexual exploitation," according to the 2017 Trafficking in Persons Report by the U.S. State Department.

Sr. Magdalene Musila noted that human trafficking is common in rural areas where there is extreme poverty, limited or no access to education and few job opportunities for the young. Therefore, when families are given a chance to send their member to cities or abroad with the promise of a better future, they are quite easily swayed, she said. 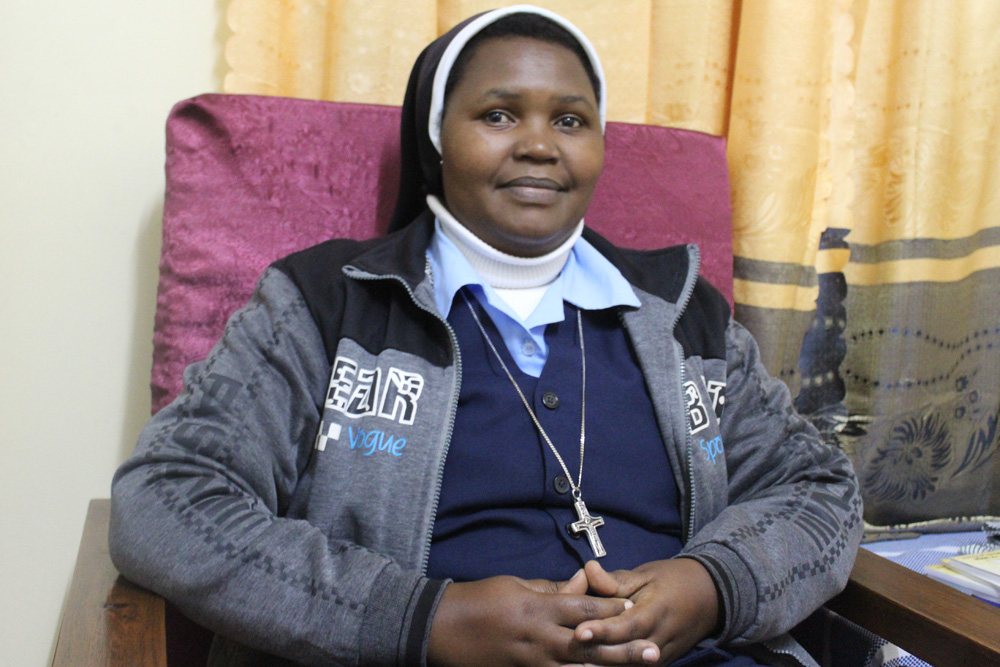 Sr. Magdalene Musila of the Sisters of Notre Dame is raising awareness as well as providing assistance to victims of trafficking in northern Tanzania. (GSR photo / Doreen Ajiambo)

But Musila said it is a church responsibility to fight against the violation and degradation of human beings, and vowed to eliminate human trafficking and arm the vulnerable with education.

She now travels in schools and around the rural communities to work with village elders, women's groups and youth groups. She educates them about human trafficking experiences and raises awareness of the dangers. She also encourages the public to act as a neighborhood watch and report any acts of trafficking to the authorities.

"I can say that human trafficking is the illegal use of people, and we should raise awareness about it," said Musila, who is also a teacher at Notre Dame Secondary School in Arusha. "My profession as a teacher gives me the opportunity to interact with different people. I always use my platform to educate the students and also the society."

Those efforts appear to have been successful.

Paulina Masawe, 38, told how the sisters helped her when her husband wanted to sacrifice her children after he left his religion and joined Satanism.

"He said, with the sacrifice we would become rich," Masawe said her husband told her, hoping she would change her mind and agree to traffic her children for human sacrifice. "When I refused, he beat me up and did not want us to go to church."

The sisters rescued Masawe and her five children. They were taken to the Zinduka Women's Center, headed by Muthoni, where they received care and free education. The sisters later offered Masawe a job as a preschool teacher at Notre Dame, allowing her the ability to take care of her children, she said.

"I really want to thank the sisters for saving my family," Masawe said tearfully. "I was forced to run away to save my children. My extended family supported my husband."

Lately, the government of Tanzania has taken some action to fight the scourge of human trafficking, but it does not fully meet the minimum standards for the elimination of trafficking, according to the 2019 Trafficking in Persons Report.

Speaking to Global Sisters Report, the chairman of the Tanzanian Anti-Trafficking Committee, Adatus Magere, admitted that human trafficking was rampant but said the government was raising awareness across the country. He noted that security agencies recently rescued two Tanzanian women who had gone to Thailand to look for jobs in supermarkets but were later forced to engage in sex work. 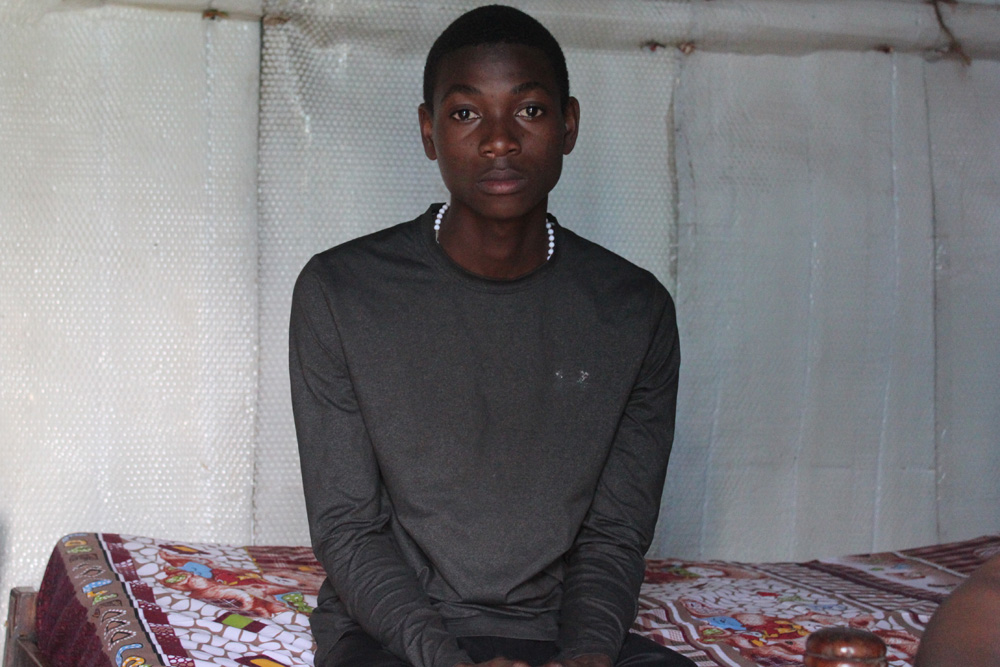 Stanley Joakim sits on his bed as he narrates how his abductors tortured him for three days without giving him either food or water. (GSR photo / Doreen Ajiambo)

"We have taken various measures to combat human trafficking in the country because it violates human rights," he said. "We have arrested agents and all those people who are involved in the illegal business, and cases are in the courts."

Meanwhile, Stanley remains worried and hopes that his abductors will one day be arrested so that he finds justice. He prays that no child will ever have to undergo the same experience.

"I'm afraid to walk alone, I sometimes get scared that they would kidnap me again," he said. "Our government should arrest those involved so that we can be free."