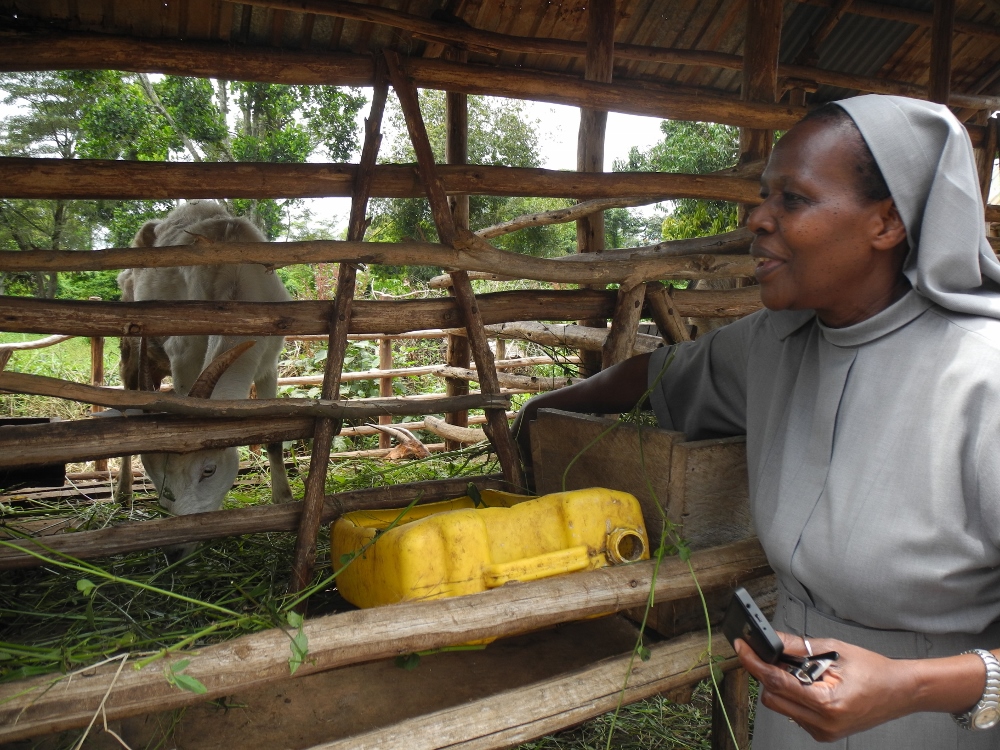 Sr. Ernestine Akulu with one of the goats on the demonstration farm next to the Bishop Caesar Alisi Hospital in Luweero. (Melanie Lidman)

At a hospital in Luweero, Uganda, two hours outside the capital of Kampala, the children are sometimes discharged from the hospital with antibiotics and a female goat. Both the goat and the medicine come from an initiative created by Catholic sisters who noticed that many of the HIV-positive orphans they treated at the Bishop Caesar Asili Hospital were stunted and malnourished.

Relatives or community members adopted these orphans, but their outsider status meant they were often the last to get food, if the impoverished family had any to spare. The Missionary Sisters of Mother Mary of the Church got frustrated when they sent these children home. Although they provided medicine, without proper nutrition, the children did not improve.

Sr. Ernestine Akulu, the hospital administrator, estimates that about three to four children are abandoned at the hospital every year and that there are at least 200 orphans in the larger community surrounding Luweero. In order to encourage family members to step in and raise the children, the sisters started teaching income-generating projects for the caretakers. For the first project for caretakers, sisters distributed maize, beans and other crops to the families. Then they moved towards providing dairy goats.

The goat program in Luweero is part of a larger effort of sisters turning to agriculture for projects to create an income so they can continue providing services to the communities. Cows and pigs require too many resources to raise, but goats are smaller, simpler and reach reproductive age quicker. When they saw how effective goats could be for generating income, the sisters decided to expand to their community’s most vulnerable members. They partnered with international organizations Heifer International and Just Like My Child to get the seed money for the first round of goats. They have distributed 400 so far, and hope to distribute another 200 this year.

As sisters are spread out in the remote corners of impoverished countries, they often struggle with the same poverty in communities they serve. Services like schools and clinics are dependent on the fees that people pay, so when the sisters cannot charge high fees, or any fees, they have difficulty making enough money to sustain themselves and their projects. Declining donations from North America and Europe, the traditional founts for Catholic development projects in Africa, have exposed the vulnerability of small projects in rural areas. In some cases, sisters themselves don’t even have enough to eat.

“Sisters cannot go out and work and offer an effective ministry if they’re hungry,” explained Sr. Margaret Kubanze, a Little Sister of St Francis and the secretary general of the Association of Religious in Uganda, the umbrella group for women and men religious in Uganda.

“If you went to bed hungry, you won’t have energy to get up and serve. Our sisters are working with the poorest people. Sisters must have vision and for that they must be well-fed. If they’re sick and hungry, they cannot be effective.” 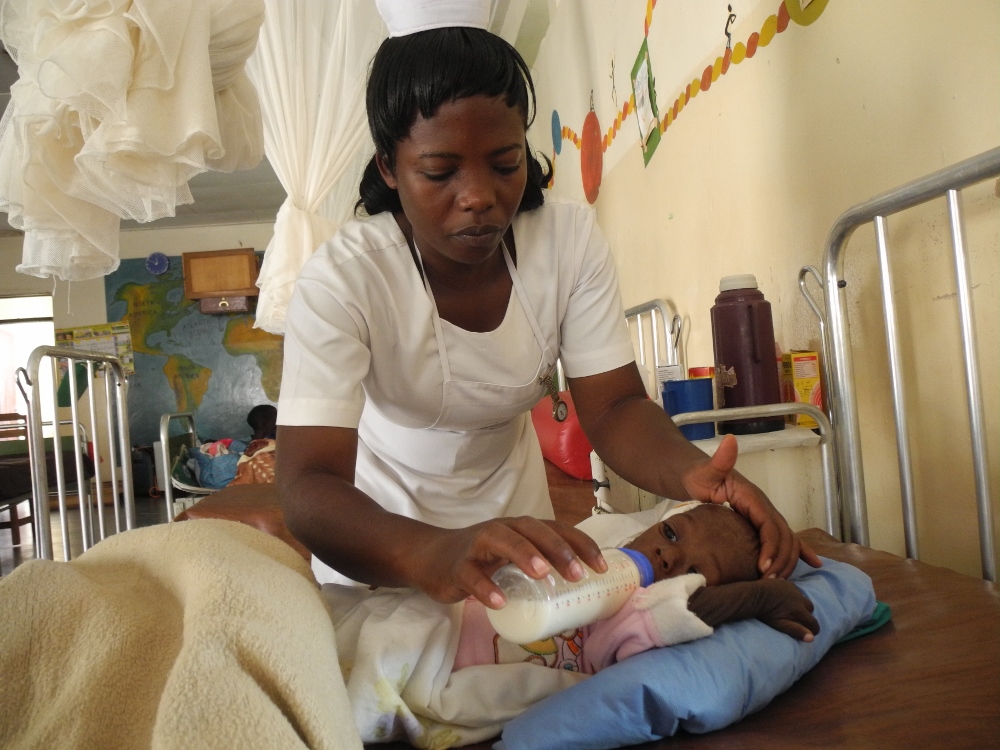 Nurse Rita Nancumba gives milk from the sisters' farm at the Bishop Caesar Alisi Hospital to nine-month old Owen Takba, a baby who was abandoned by his parents. (Melanie Lidman)

Kubanze added that a sister weakened by malnutrition will be bedridden for two weeks if she contracts malaria, while a healthy sister who gets malaria will only be sick for a few days before returning to work. And when sisters work effectively, they invest back in their communities.

“With a better income for members, members can use that income to take care of more poor people,” she said.

The Association of Religious in Uganda is piloting a sustainable development program rooted in agriculture, which is the first step towards gaining financial self-sufficiency and ensuring food security for sisters. The Congregational Agriculture Development Education Program (CADEP) has trained 107 men and women religious from different congregations in effective farming and animal husbandry practices.

The agriculture education program has provided additional training to 37 participants to help them become agriculture tutors so they can train other people in their congregations. Now, the program is working to offer grants of 10 million Ugandan shillings (about U.S. $4,000) to start new agricultural projects, like planting 20 acres of maize or building a store where they can sell produce from their fields.

At Kyasira Home of Hope orphanage near Entebbe, 57 youngsters work a few hours each week in the garden growing their own food. They raise cassava, sweet potatoes, eggplant, cabbage, bananas, tomatoes and different types of leafy greens.

“Most of the kids are AIDS orphans, some still have one parent, but maybe that parent is sick and can’t take care of them,” explained Sr. Mary Peter Namasinga, a Good Samaritans Sister who is the director of the orphanage. 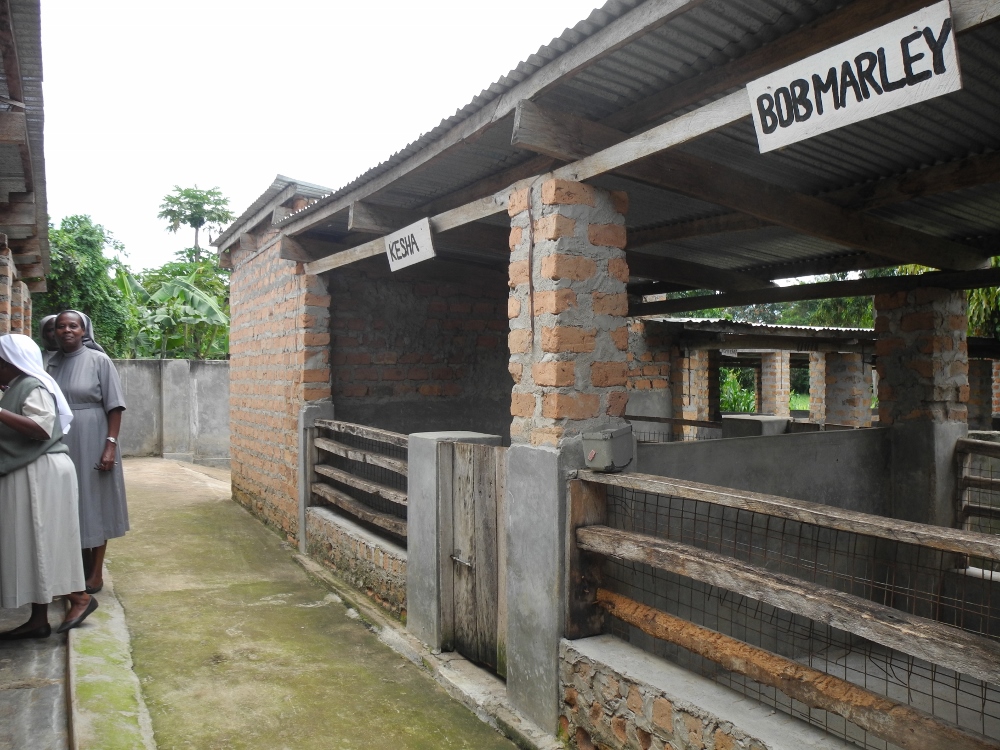 The sisters and Just Like My Child representatives named the pigs at Bishop Caesar Alisi Hospital's piggery after famous musicians, including Bob Marley, Jay-Z, and Ke$ha. (Melanie Lidman)

The children live at the orphanage, built on a pastoral spot on the shores of Lake Victoria, and attend nearby schools. The orphanage also has two cows, 200 egg-laying chickens, and a piggery, in addition to a brick making operation which employs local villagers.

The orphanage still subsists on donations and is desperately looking for a foreign donor to help build a boys wing so services can expand to host 100 children. But their agricultural projects mean that the sisters can raise almost all of their own food, providing well balanced meals for the children, instead of spending their meager resources at the market.

Back in Luweero, the hospital is set on a sprawling 228 acres, so the sisters have plenty of room to expand their agricultural operations. Currently they have a 12-acre farm, which doubles as a demonstration farm to educate local villagers for improved agriculture practices and also provides food for the sisters.

Their forays into animal husbandry, the precursor to the goat program, began in 2008, when they bought a few cows for milk. Then they bought chickens, and soon after pigs, and finally the goats.

“From every animal we save some money, that’s how we’re moving forward,” said Akulu. “We now have milk for the abandoned babies and for the sisters.”

Now they have 1,200 chickens, with the goal of expanding to 3,000 chickens and enlarging their stable to dedicate it for goat breeding. They also employ eight locals at the farm, providing jobs for the community.

“We recently sold a lot of pigs because we couldn’t breed them with each other anymore because of inbreeding, and we made 10 million shillings [U.S. $4,000]. For us, it’s a viable income and it can work,” said Akulu.

The hospital employs 100 health workers and three doctors, and needs to find a way to pay all those salaries. Some expenses are paid by the Just Like My Child Foundation, created by California native Vivian Glyck. But Akulu is wary of becoming too dependent on foreign money.

The goat project is both a source of income for the sisters, allowing them to improve hospital services, as well as asset for their community. 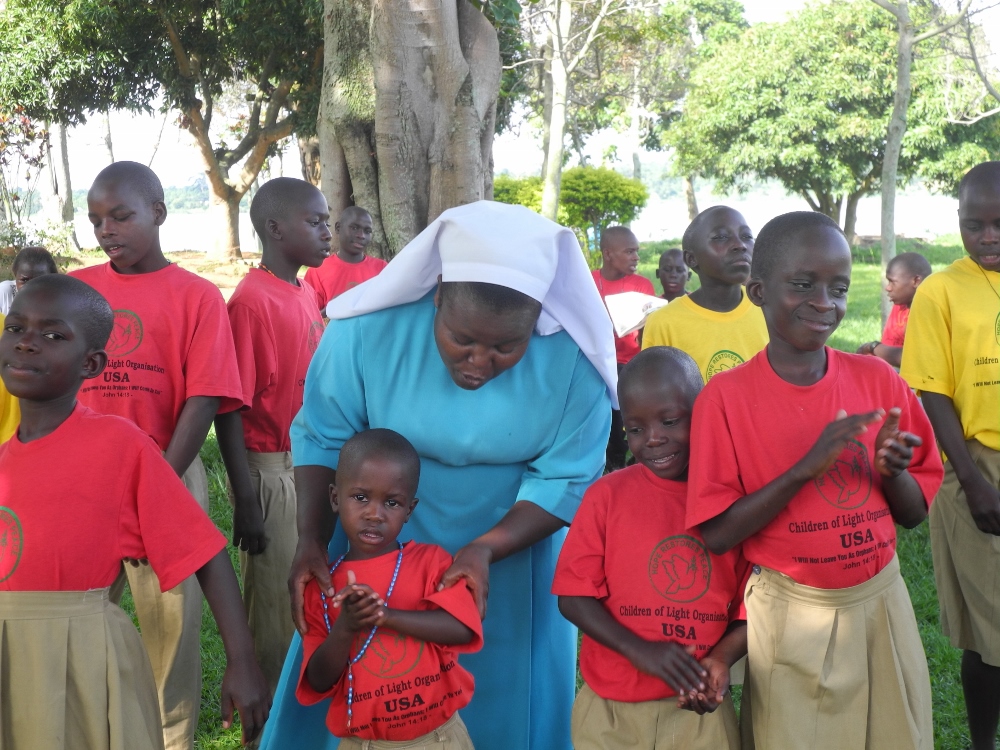 “This is a self-supporting project because the first households that we give the goats to, they must give the first female offspring to another family,” said Akulu. “The goats program also comes with some other requirements, the family must have a kitchen garden so they can improve their nutrition, and they must prove they are generating an income with the goat. We are also promoting savings groups so they put some income aside. We tied this program to community health insurance schemes, where each family has to make contributions to pool funds together.

“This means that someone in the scheme can come to the hospital and they do not have to pay,” Akulu continued. “We found people used to come with very chronic illnesses at the end. This is very expensive because they need more medicine and more costly medicine, because they did not think they could pay. Now people are coming at the beginning of their illness, which is cheaper both for the patient and for the hospital. And not only are we providing services, but we have entered deep into the communities.”

While agriculture is a step in the right direction, it cannot solve all of the problems congregations face to sustain themselves.

“In agriculture, profits are not very big,” said Kubanze, of the Association of Religious in Uganda.

The agricultural development program she oversees plans to ask congregations to return the funding for projects plus 10 percent, so they can continue to grow the fund for even more congregations.

“But we are concerned that asking them to pay back 10 percent may be their entire profits, so this could change,” she said.

Agriculture can help lower costs for ongoing projects, but it is difficult to raise sufficient capital for new projects solely through agriculture. Even the goat project in Luweero started with the help of two foreign organizations.

The hospital in Luweero is growing quickly. From June 2012-June 2013, the hospital treated 21,000 patients. The following year, that number rose to 42,000. In April 2013, the Health Ministry changed the denomination from “clinic” to “hospital,” due to the laboratory and refrigeration capabilities for blood storage. 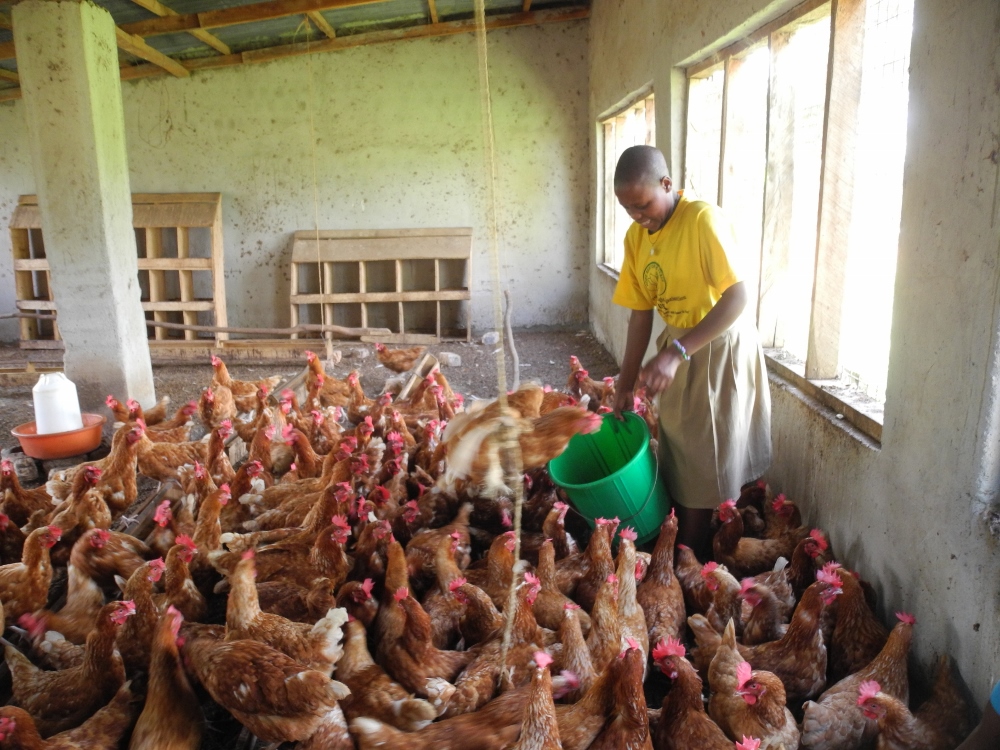 Annete Nabawanuka, a 12-year-old resident of the Kyasira Home of Hope feeds some of the 200 chickens that provide food for the orphans and an income for the sisters. (Melanie Lidman)

But Akulu knows that smart financial decisions, including generating income, must accompany the hospital’s growth.

“We need projects which can help us sustain our activities,” she said. “We can’t sustain our services if we pay staff with money from outside [not generated by the hospital or farm]. We want the hospital to have a project which generates money.”

Amid grief of their own, ministers need to accept ministry from others

Excerpt from 'Generations of Catholic Sisters'