The questions for women in religious communities facing decline are ceaseless. How do we provide for our elderly members? How do we shut down a mission central to our identity as a congregation — or pass it on to laypeople? How do we grieve the deaths of friends, which often seem to come in waves, and keep hope alive?

Remarkably, leaders and observers say, while there had been times of sadness as colleagues died and ministries were reconfigured or surrendered, women religious have not been overwhelmed. Instead they have brought skill, resilience and profound faith to the task of planning for their individual and corporate futures.

"I'm big into the Providence of God," said Sr. Gladys Guenther. She was congregational president of the Fremont, California-based Sisters of the Holy Family from 2007 to 2017, during which her community made several consequential decisions. They decided to maintain their separate identity rather than merge, to demolish their motherhouse and build aging-friendly cottages, and to endow a new nonprofit trust to preserve the historically significant central park area and make it available for public use.

In November 2018, they punctuated their process with a signed governance covenant with the Sisters of the Holy Names of Jesus and Mary, an international order with a U.S.-Ontario province based in Oregon.

The choices women's religious groups are making as they wrestle with handing over ministries and providing for their senior and middle-aged members are the fruit of decades of reflection on the viability of the current congregational model — one dependent on recruiting new, and younger members. That way of forming community, at least in the United States, looks increasingly uncertain.

Options for religious groups in flux can include becoming part of another community, merging one or more congregations into a new one, or entering a governance covenant with one or more bodies keeping their separate identities. This last model has been given an intriguing incarnation in the nine-community Wisconsin Religious Collaborative. Concerns about the congregation's status in canon (church) law and government law also have to be addressed.

"It's not like we sat down one day and talked about completion," said Guenther. "We noticed that we weren't able to recruit and maintain new sisters, and that we were getting older, but we were involved in ministry and in our lives and thought it will turn around."

But about 2009, she said, they made the decision not to accept any applicants, having not had any new sisters apply or stay. "So, it was more of an affirmation of reality than a decision to close the door to new applicants."

"We've accepted our future," said Sr. Caritas Foster, who now heads the Holy Family leadership team and signed the November covenant agreement with Sr. Maureen Delaney, a Sister of the Holy Names. "We never expected to be in this place, but God has always provided for us. Even though it's hard, I think we are in a place where there is a deep sense of peace."

Holy Family leadership teams serve for four years, and Foster estimates that they may be able to marshal women for one term beyond that. When they aren't able to elect a team for themselves, the community and the Holy Names sisters will petition the Vatican for what's called in church language a "commissary," or a member of the Holy Names sisters who will provide care for the remaining Holy Family sisters.

"Our two congregations are now intertwined for the remainder of our history," wrote Foster in a magazine sent to Holy Family friends and donors last January. Currently, the community has 52 sisters, said Foster.

But concrete choices also have spiritual implications. These may go to the heart of a religious community's identity: What does our call to serve look like today? How can we continue to be faithful to it in a moment when change seems to be the only constant?

The urgent underpinning for their decisions is apparent. Time is of the essence. In her time as president, Guenther buried 56 sisters, she said.

Then there are the ministries they may have to curtail or hand over to laypeople. "In the old days, if a sister left a mission or a ministry, she was replaced," she said. "Early in this century we realized we didn't have people to replace (them)." The Sisters of the Holy Family were founded in 1872 in San Francisco to care for the poor, particularly families, she said, and didn't have a hospital or a university to close.

Though there was grief when the order decided not to accept new members, one of the most difficult decisions she had to make was closing one of their childcare centers in 2015, said Guenther.

At the same time, she said, the sisters  remained true to their original call. In particular, that included their mission to help poor women and children, a vision that resulted in the building of the first affordable housing in the Mission San Jose section of Fremont in the early 2000s, before Guenther became president, as well as a more recent housing partnership with Abode Services. Committed to being good environmental stewards, the sisters also made sure that their new homes or single-story "cottages" (the old motherhouse was torn down) were built to the highest environmental standards, and the creation of the nonprofit Gardens at Palmdale was open for public use.

When it came time to explore connections with another community of women, it was important, Guenther said, that they find one that appreciated the culture of the American West: knowledge of history and progressive orientation of the region, the dynamics of residing on the Asian Rim, the challenges of diversity, and an appreciation of how area geography affects travel, lifestyle and communication choices.

The Sisters of the Holy Names, they discovered, were committed to social justice issues that also engaged them, including climate change, human trafficking, water resources and immigration, said Foster.

The decision to face the challenges can open some new avenues for religious communities, said Sr. Mary Hughes, the director of transition services at the Leadership Conference of Women Religious. Hughes works with many congregations inside and outside the group.

While in this case a third corporate entity will handle human resources, property and other practical or legal issues, the result is similar: Both communities are free to maintain their traditions and a significant measure of autonomy.

"One of the guiding principles is that each community would keep our identity and our charism until each sister goes home to God," said Sr. Janice Bader, president of the Sisters of the Most Precious Blood and former executive director of the National Religious Retirement Office.

Another scenario is that developed by the network of nine congregations known as the Wisconsin Religious Collaborative (one is in Illinois). The communities, which individually range in size from 24 members to almost 400, just came up with a plan to work together in the future on everything from IT to health care to formation, with the potential to share management services and programming alike.

Members of the collaborative (like everyone else interviewed for this article) wanted to be faithful to the vision of their founders, said the body's executive director, Lyn Korte. A laywoman, Korte was hired last January to develop common management strategies, cooperate on program opportunities and find other innovative ways to pool resources, not close congregations. In fact, only three of these groups have decided not to recruit new members, she said.

Given their similar need for services and programming, the coalition is trying to find a way both to allow community leaders and the women they serve to focus on ministry instead of administration, she said, adding that the model is already attracting outside interest.

"I'm impressed by how these religious leaders have approached this with hope and faith," she said, and with the attitude that not all change is bad change. Instead, they are asking: "How can we make this a beautiful change and enrich the lives of our sisters?"

"In one regard it could be looked on as sad or tragic that this community is ending its journey. On the other hand, and this is hopefully how our sisters look upon it, we were founded for a purpose and we've been faithful to that. Maybe our mission as a community has reached its fulfillment," she said.

"One of the blessings we have is seeing a panorama of options for religious life. It's helpful if you know what the options are. I don't think there is a more creative group of women than women religious," said Hughes, a Dominican in Amityville, New York.

Bader takes the long view. "We are a resurrection people. We don't look at death as the end but as the beginning of new life." Her sisters tell her, she added, they are grateful that they have the opportunity now to live their lives as fully as possible, and "keep our eyes on the mission of service instead of worrying about what's going to happen to us."

Sr. Ann Lacour, the congregational leader of the Marianites of the Holy Cross in Covington, Louisiana, serves as pontifical commissary to the remaining 11 members of the Sisters of the Most Holy Sacrament. Having buried four of her own flock since January, she said "we're living the paschal mystery in ways we never anticipated."

Lending a hand to another order in need seems also to come naturally to many congregations. "Twenty-five years ago, there was a spirit of competition," mused Guenther. "Now many religious communities are closer, focused on what we have in common. We're all in this together."

Grappling with change is an "an invitation for sisters to love God more deeply," said Hughes. "When everything is going our way, and everything seems fine, we tend to be fairly independent and think we've got everything under control. As we walk into a new phase it calls us to deeper love and deeper trust in God. Sisters are rising to the occasion."

[Elizabeth Eisenstadt Evans is a freelance religion writer in the Philadelphia area.] 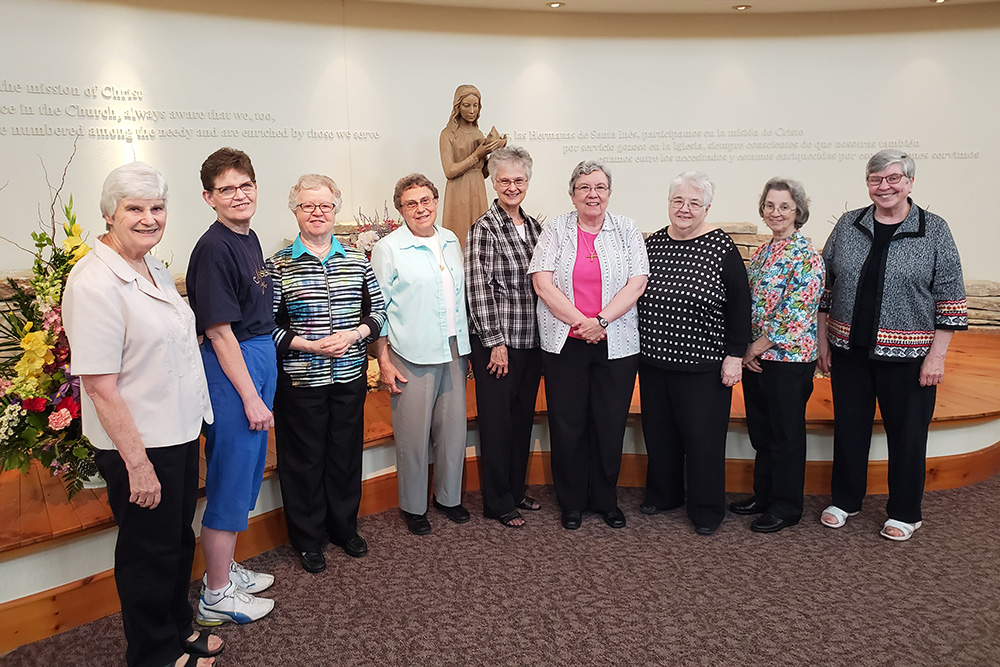 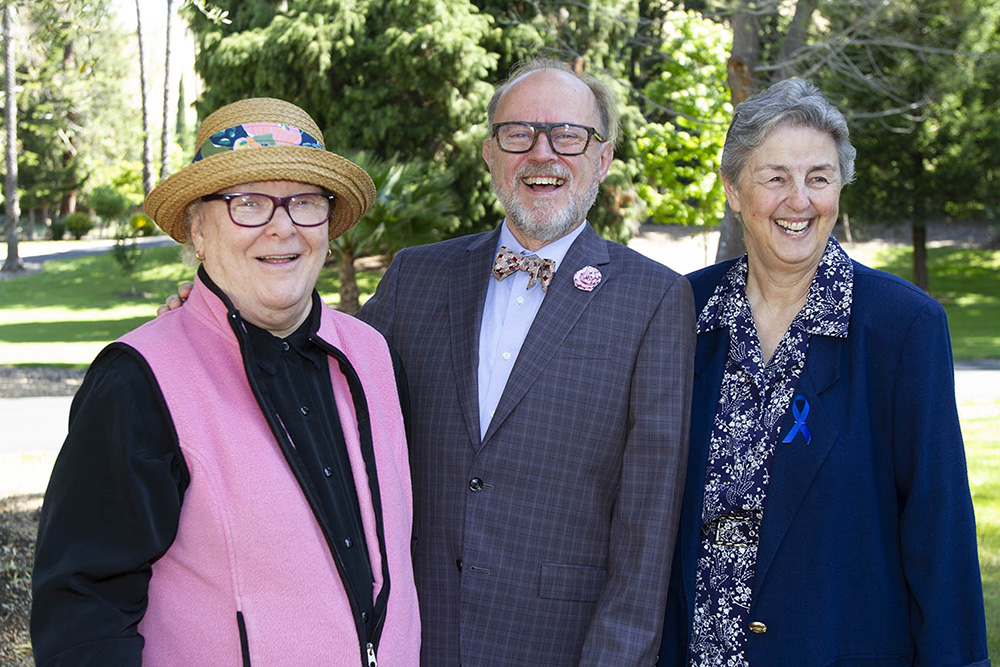 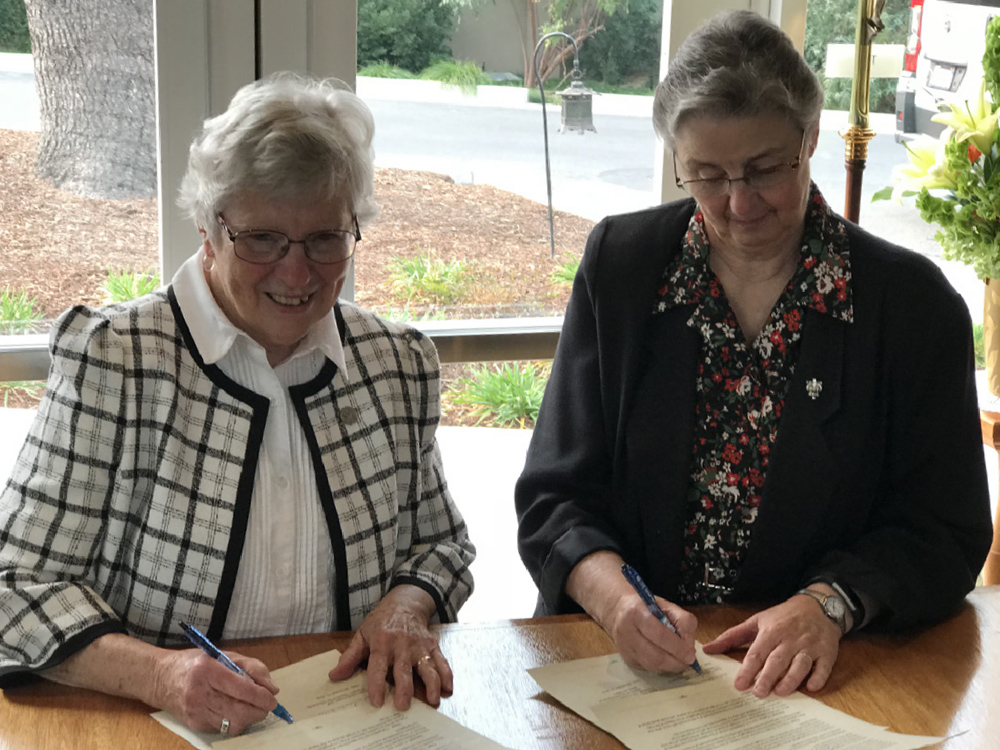 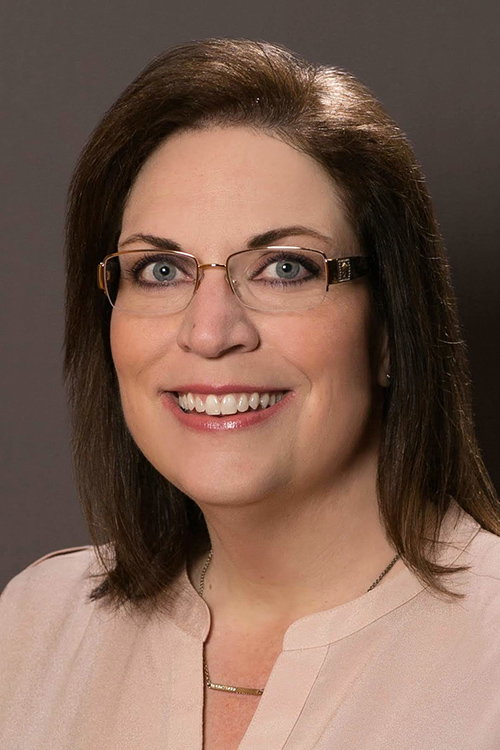 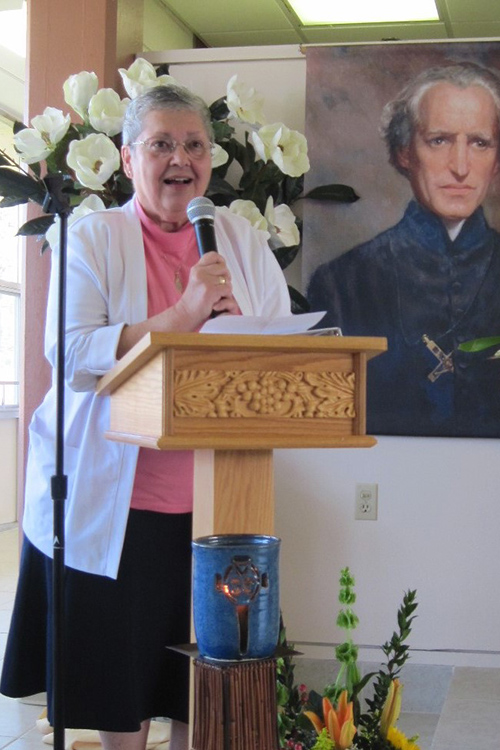