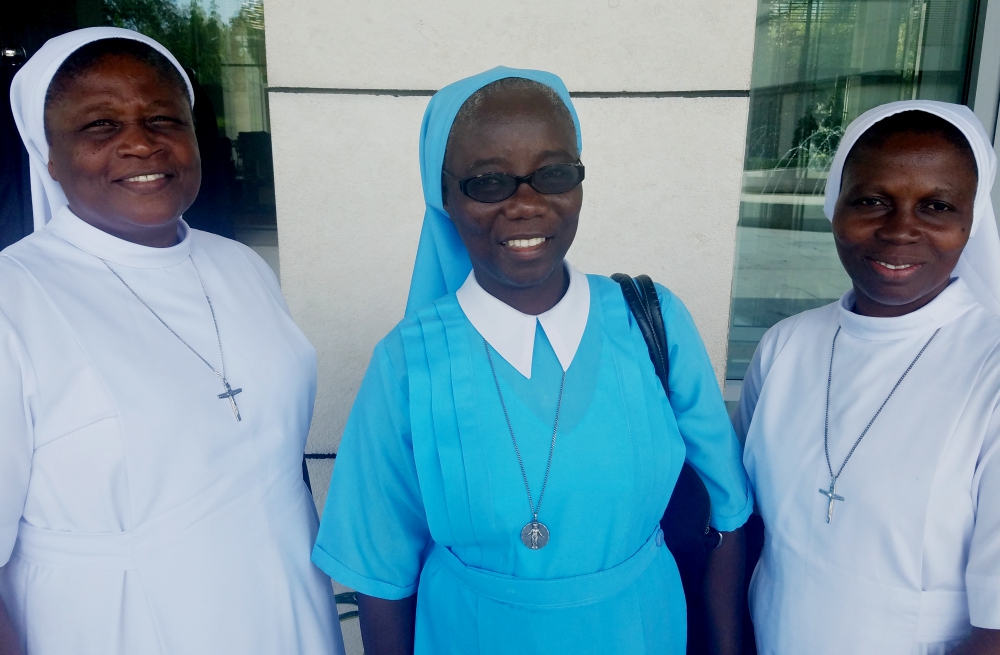 But in recent years, the ties between the two Ghana women religious have grown stronger, with Hasford, superior general of the Society of the Infant Jesus, and Sorkpor, superior general of the Handmaids of the Divine Redeemer congregation, collaborating directly on mission work in a part of southern Accra named Old Fadama, a sprawling, illegal urban settlement

My colleague Melanie Lidman wrote about the area in a Global Sisters Report article two years ago, noting that it "has 100,000 residents and no schools."

Melanie reported the area is "a crowded maze of ad-hoc buildings where transplanted refugees from Ghana's severely underdeveloped northern region live. Sodom and Gomorrah is its derogatory nickname for people who think the slum is filled with crooks, junkies and prostitutes."

Not wanting to favor the "derogatory nickname," Hasford and Sorkpor, like others working for the church, reject it, preferring, instead, to call the area "City of God," as a symbol of hope and shared humanity.

"We Catholics call it 'City of God' because everyone who lives there is God's children," Hasford told me during a recent convening of West African sisters sponsored by the Conrad N. Hilton Foundation and held Dec 2-4 in Accra; the foundation sponsored a similar convening of sisters from East Africa Dec. 6-8 near Kampala, Uganda. (The foundation, together with National Catholic Reporter, also funds Global Sisters Report.)

Sisters of different congregations working collaboratively on projects is nothing new, nor is it unusual. But the pleasure Hasford and Sorkpor took in explaining their collaborative work during the Ghana convening was striking, as was the way that the theme of collaboration was held up numerous times during the two meetings.

"Collaboration is important," said Franciscan Elizabethan Sr. Agnes Wamuyu Ngure, general secretary of the Association of Sisterhoods of Kenya, who attended both the Ghana and Uganda events. "None of us has the 'single solution' to the problems we face," she told me. 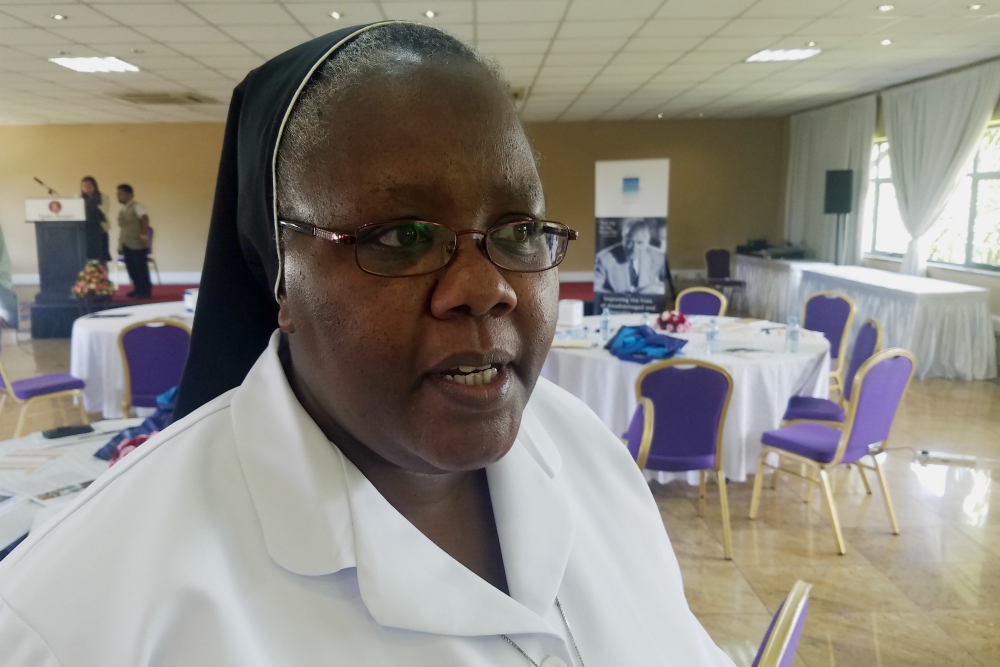 "Collaboration is important," said Sr. Agnes Wamuyu Ngure, general secretary of the Association of Sisters of Kenya, who attended both the Ghana and Uganda events, seen here at the Uganda meeting. "None of us has the 'single solution' to the problems we face." (GSR photo / Chris Herlinger)

Speaking during the Uganda meeting, Sr. Jane Wakahiu, director of the Hilton Foundation's Catholic Sisters Initiative, was even more specific. "We know no one congregation can solve the problems of Africa alone," said Wakahiu, a member of the Little Sisters of St. Francis in Kenya. "Some of the people who are best able to solve the problems of Africa are sitting in this room."

The convenings provided an opportunity for sisters and Hilton staff to meet about new strategies, and for sisters to gather with other women religious and members of nongovernmental organizations and educational institutions about forming new partnerships. Fifty-seven participants gathered in Ghana; 73 in Uganda.

The work being done in Old Fadama involves both Hasford and Sorkpor, and another sister, Sr. Rita Ann Kusi of the Handmaids of the Divine Redeemer. Their focus is on education, skills training, microfinance for small businesses, and health. HIV/AIDS and hepatitis are serious health challenges in the area. "Our focus is now on building a [health] clinic," Hasford said.

But the sisters are not working alone. A long-term project to improve conditions in Old Fadama, funded by the Hilton Foundation, has included the participation of the sisters, as well as the wider church, government bodies, businesses and Old Fadama residents themselves.

Jessica Kritz, a research professor at Georgetown University's Conflict Resolution Program, designed the research model for the project. She and Peter Batsa, acting as the project's local facilitator, worked with local residents in developing a "cross-sector" collaboration. 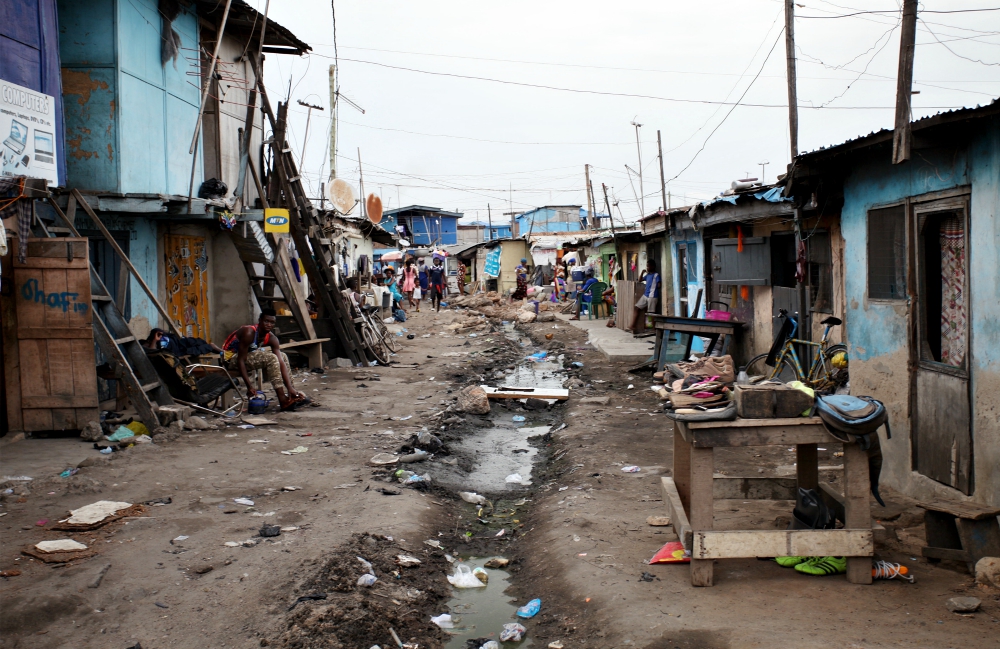 In a commentary that appeared in the September issue of the journal The Lancet Global Health, Kritz noted the work of the sisters in the wider work being done, in this case construction of latrines following a cholera outbreak in Accra that began in 2014 and continued into 2015.

"Multiple health interventions had successfully eliminated cholera outbreaks in other areas of the city, but failed in Old Fadama," wrote Kritz, who participated in the Accra meeting as a panelist, speaking on fostering effective partnerships.

In Accra, she noted that the work she and the sisters and others are undertaking utilizes several of the United Nations' 17 sustainable development goals, set out in 2015 to eradicate poverty and improve economic and social conditions throughout the world. These include using Goal 17, partnerships, to achieve Goal 3, good health and well-being, and Goal 6, clean water and sanitation.

The sisters, Kritz wrote, "known for their long-term attention to communities in need, identified that the project must respond to community requests to achieve sustainability."

The community, she said, "was frustrated with short-term projects led by internationally funded foreign investigators or collaborators, which resulted in time and resources taken from community members — but 'nothing changed.' " Adding to the problem: Different ethnic groups destroyed other groups' property.

To change the dynamic, different groups started to work together. "The city donated the land and approved infrastructure investment, and entered a long-term public-private partnership with the collaboration to manage the latrines," Kritz wrote.

The sisters raised funds for installing the latrines that included signage stating that different groups were working together to improve sanitary conditions. The city and community engaged in site selection and management, Kritz said, "and developed a business plan so that the latrines would be sustainable and the proceeds would be reinvested in the community." 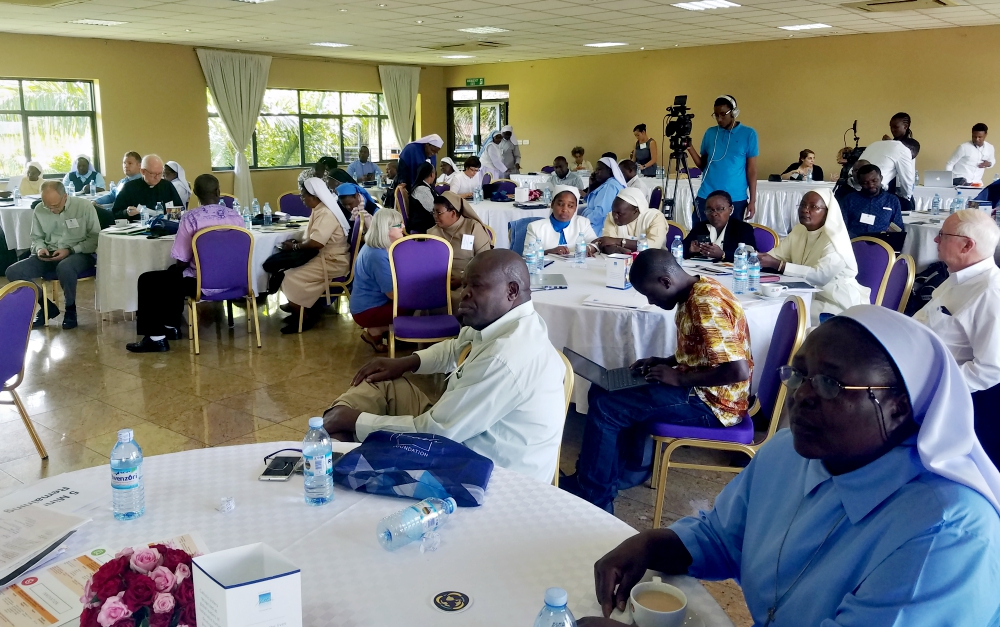 Things "got exciting," Kritz noted, when the idea "attracted the interest of multiple sanitation businesses that viewed the strategy as workable, recognized a business opportunity, and wanted to participate in policy change. On their own initiative, they began to install latrines, creating local sustainability and freeing the stakeholders to develop a new strategy that they are resourcing nowadays."

In short, with wide participation from different groups, a community was able to improve conditions from within.

There is a lesson there, Hasford, Sorkpor and Kusi told me as the meeting in Accra wound down. When you work collaboratively, across boundaries of congregations, government bodies and business, and with participation of those seeking change, "you get going," Hasford told me.

"Two or three working together is better than one. It's a cliché, but it's true," she added.

The sisters are more focused on results than on taking credit for their work. Old Fadama is a predominantly Muslim area, and there is a sense of pleasure and accomplishment for the sisters in working across lines of religious traditions.

Other sisters spoke similarly of their ministries. On a panel at the Ghana convening, Daughter of Charity Sr. Olivia Umoh, director of a street children project for Ghana's Kumasi Archdiocese, said, "Working with the vulnerable is at the center of our religious life. Every one of us has a responsibility to reach out to the poor, the vulnerable, the needy. You have what it takes." 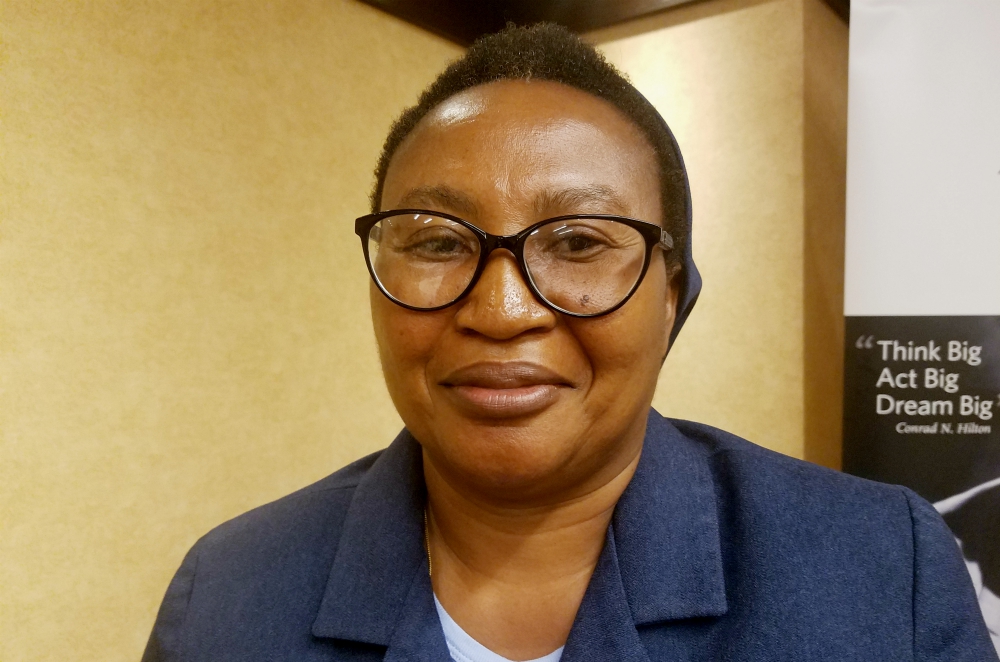 But Umoh also asked fellow sisters to look beyond models of charity. "We have enough charity," she said. "We need to change social structures."

To do that requires the patience and steadfastness to work together. Speaking at the Uganda meeting, Carmelite Sr. Marie-Claire Kapachika, chairwoman of the Association of Women in Religious Institutes of Malawi, said, "We have the capacity to love, whether we are sisters or NGOs. Let us continue to collaborate."

And in the spirit of collaboration with nongovernmental organizations and others, Good Shepherd Sr. Jane Waruguru Kimathi of Kenya, also speaking at the Uganda convening, said sisters should never forget the particular gifts they bring to partnerships. "I believe sisters are unique," she said, "because we are able to reach the grassroots."

Ministry | African sisters find that when you work collaboratively, 'you get going'