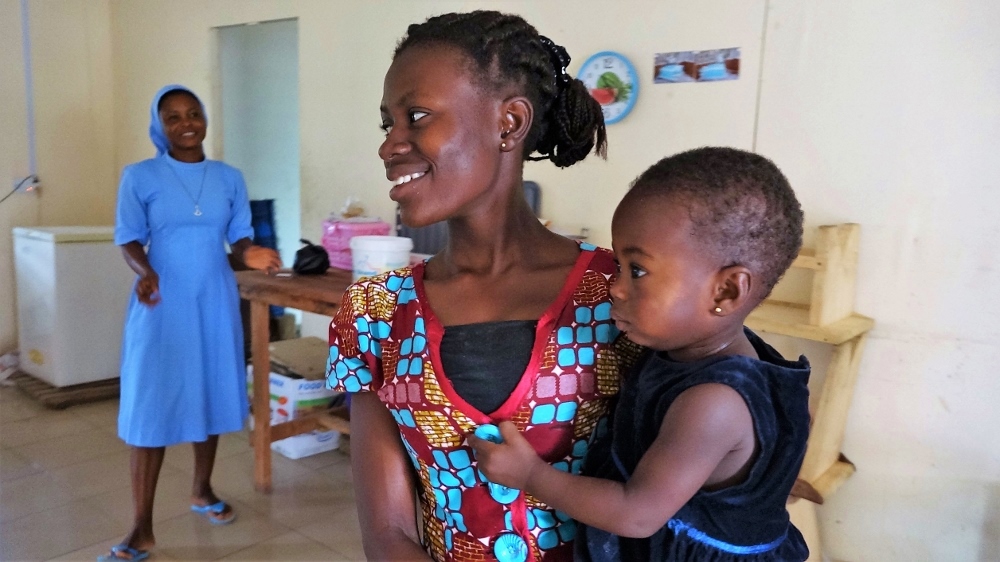 Priscilla Klu brings her 9-month-old, Vanessa Akapo, to work at the bakery with her. She is one of the young mothers the sisters have trained. (Dana Wachter)

Sodoke, Ghana — In the Volta Region of Ghana in west Africa, the Sisters of Mary Mother of the Church Congregation run a health care facility, Mater Ecclesiae Clinic; the Mater Ecclesiae School for young students in the area; and their convents, which include facilities for baking bread, meat pies and Communion wafers.

Just a 10-minute drive from the district capital, Ho, the sisters provide these services from a compound in Sodoke Gbogame, a small town, which makes reaching villages in the area easier.

Sr. Evelyn Claudia Afriyie, the administrator of the clinic who first came to work in Sodoke in 2007, says her sisters have been baking bread and the Communion hosts for longer than she's been a sister.

The wafers used to come from Rome, according to their mother superior, Sr. Georgina Irene Akoto. Around 30 years ago, as priests and communities struggled with consistent delivery to Ghana, Akoto said the sisters began making their own.

Sr. Regina Letsa learned how to make the Communion hosts from her sisters when she came to Sodoke nearly three years ago. She eventually oversaw bulk deliveries to at least three other Ghanaian dioceses and into the capital, Accra. In the last six or seven years, sisters say their product has become well-known through word of mouth. 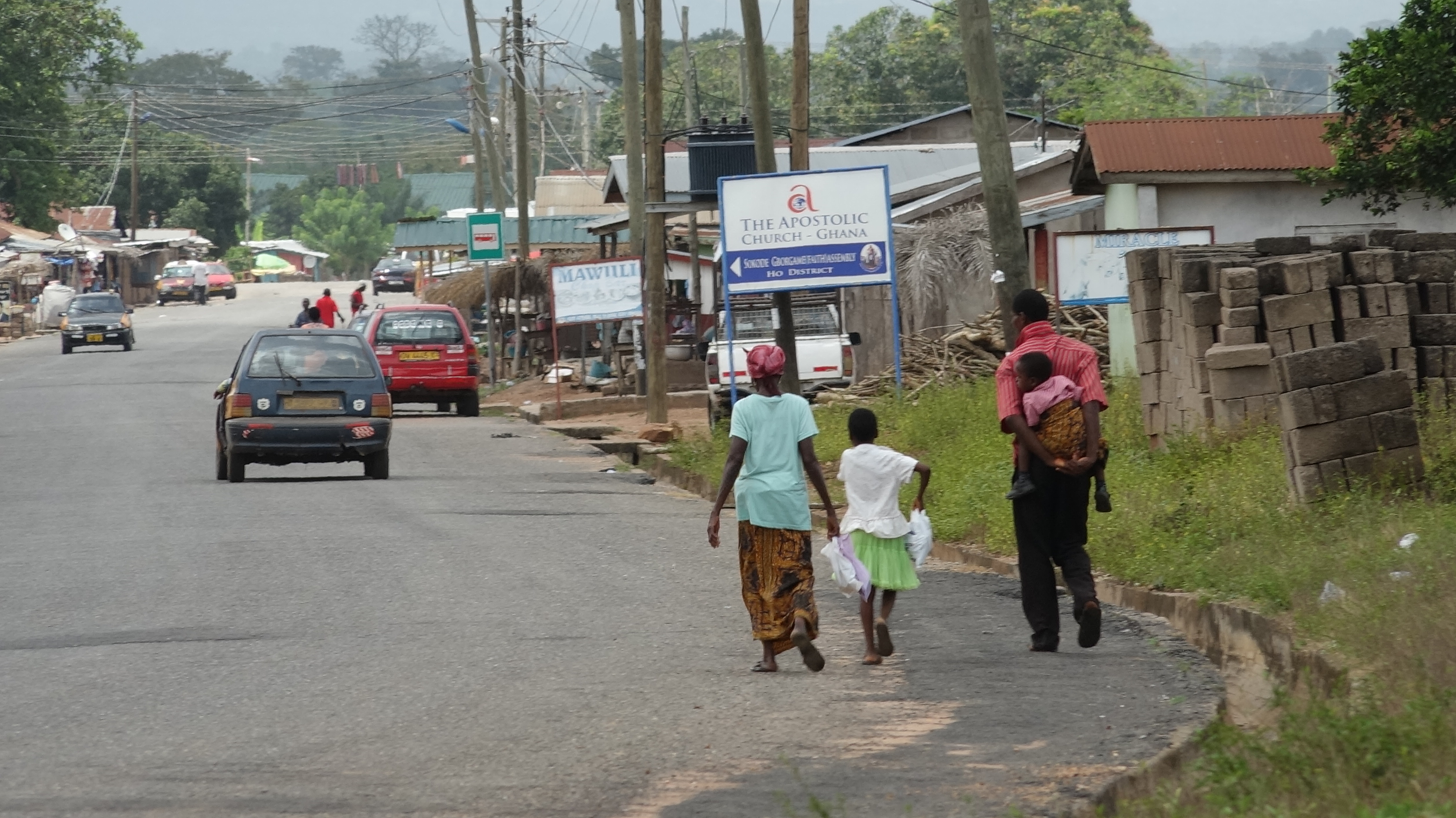 A family walks one of the main roads in Sokode Gbogame. (Dana Wachter) 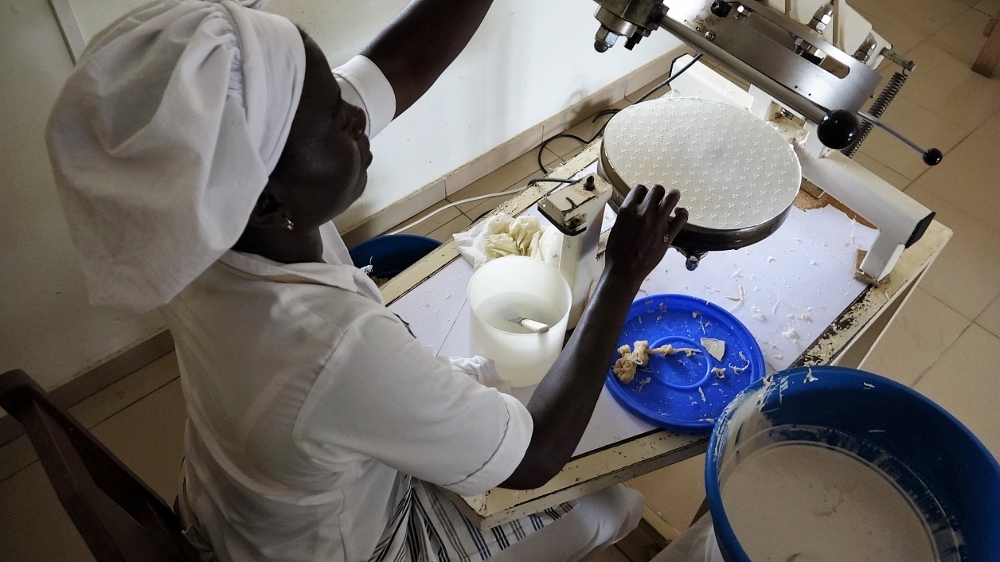 Community laypeople work with the sisters to bake the Communion hosts to sell to parishes across Ghana. (Dana Wachter) 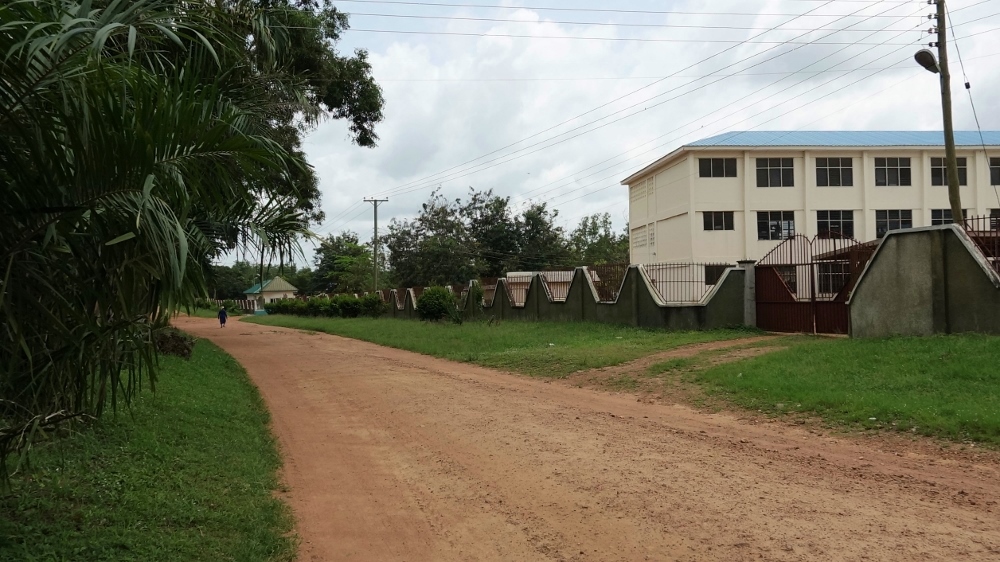 The bakery is on the sisters' property in Sodoke Gbogame, just down the road from Mater Ecclesiae School. (Dana Wachter) 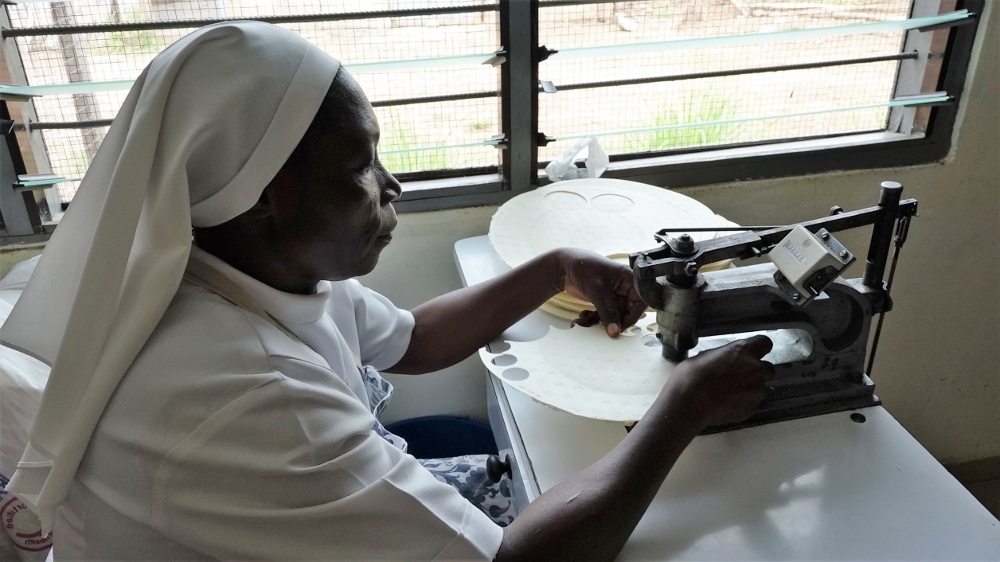 The Communion wafers are cut by hand on these presses. Sisters press a foot down to drop the metal cutting mechanism. (Dana Wachter)

"The demand now is actually more than we can produce," Akoto said. They can only make as much as their non-automated machines allow: There are currently two functioning machines that heat up through electricity but require hands to press the host, like a large waffle iron.

Laypeople from their community help sisters make the dough of flour and water, spread it onto the flat heated presses and cut off excess that squishes around the sides while the wafer is baking. They pour and bake from Monday to Wednesday and use the end of the week to punch holes into these larger sheets so they are in bite-sized pieces for parishes across the country. They estimate they fill about 100 roughly 8-inch-by-10-inch plastic bags to sell per week.

"It's not very fast as it should be," Akoto said. "[The machines] break down all the time. We try to service them. We try to maintain them, but they break."

The sisters continue baking as they can to provide for their fellow Catholics.

In Sodoke Gbogame, they perform their charism to assist the needy by teaching young women how to bake bread and meat pies to sell in the community. The women are often teenage mothers, some of whom began learning while they were pregnant and have returned to bake and sell with a baby tied around their backs in the traditional carrying fashion.

"Oh, it's helping me," said Priscilla Klu, who now brings her 9-and-a-half-month-old, Vanessa Akapo, to the convent where she works. She and a few other young women sell the meat pies they bake each morning at the nearby school and clinic and on the streets of Sodoke.

Afriyie said people across the region know that the sisters bake, and Akoto said the sisters are motivated to help these teen mothers gain income to continue their education and make money for their families.

"There are a lot of girls in the village, so if we expand this place, we will take them, we will teach them, give them a skill so they will also live on their own," Akoto said. "That's our inspiration." 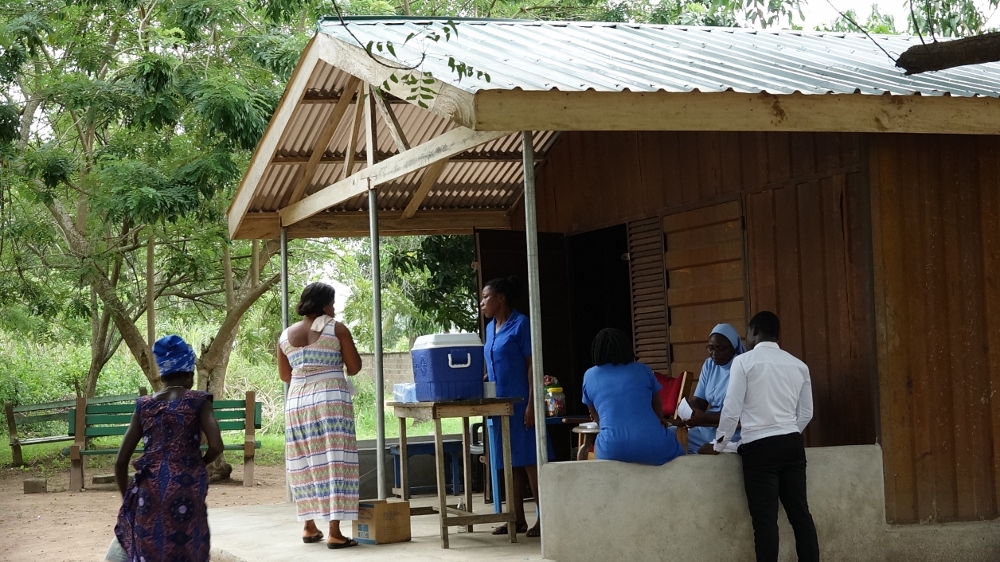 Young women who bake the meat pies sell them to patients and families visiting the Mater Ecclesiae Clinic. (Dana Wachter) 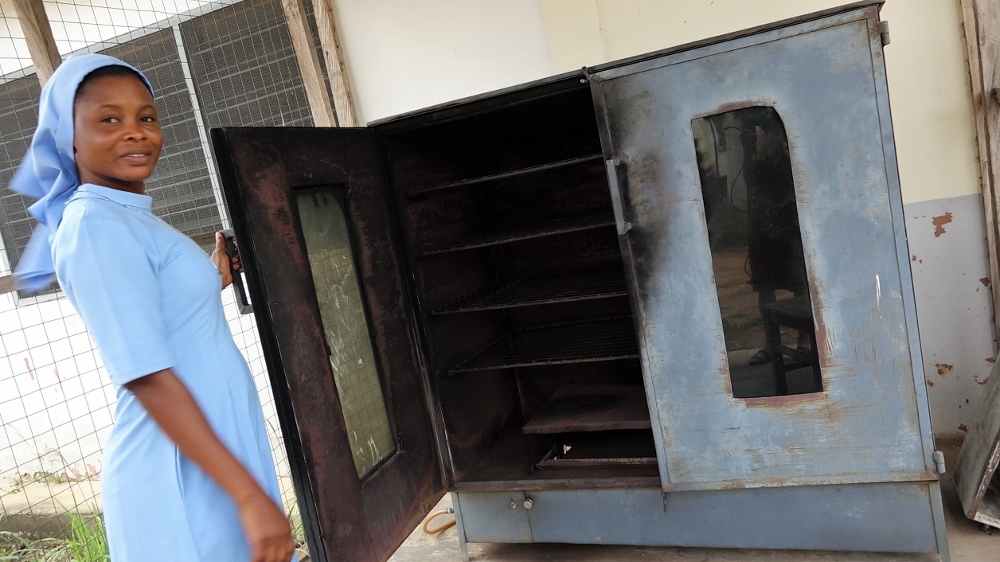 Sr. Justine Agbeko shows the modern oven that sisters and the young women they work with use to bake meat pies and bread to sell to the community. (Dana Wachter) 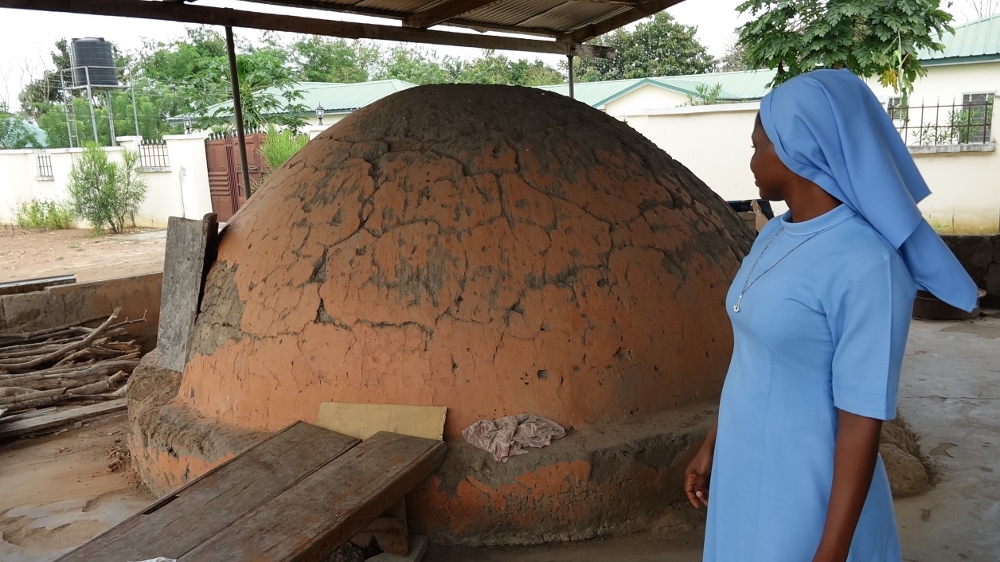 The sisters don't use this traditional oven as often as they used to, but it helps them bake bread when they receive large orders from community members or families hosting events. (Dana Wachter)

In a year of anguish, GSR offered stories of hope and courage