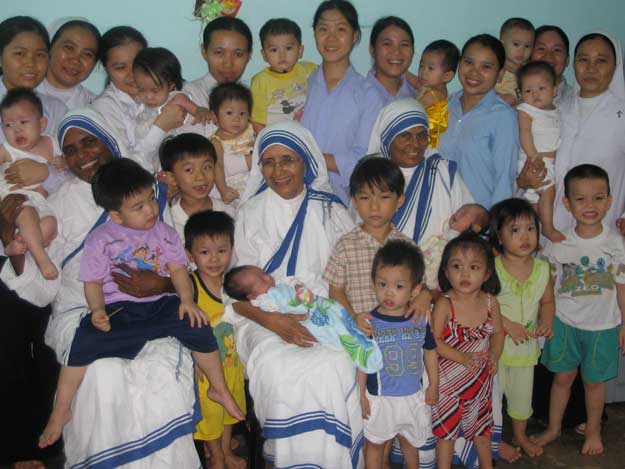 Sr. Nirmala, center, and two other MC sisters from India visit orphans at a home run by the Missionaries of Christ's Charity in Ho Chi Minh City in 2006. (Courtesy of MCC)

Ho Chi Minh City, Vietnam — In 1973, Blessed Mother Teresa of Calcutta sent seven Missionaries of Charity brothers from India to Saigon (now Ho Chi Minh City) at the request of Archbishop Paul Nguyen Van Binh. They cared for homeless people until they left the city in 1975, when communist forces took control at the end of the Vietnam War.

Archbishop Binh, who was inspired by Mother Teresa's spirituality, gathered a group of seven Catholic women and formed the Missionaries of Christ's Charity (MCC) in 1979. Its members quietly gave free medicine and food and brought the Eucharist to poor patients who stayed outside hospitals.

In 1980, he wrote to introduce the women to Mother Teresa, founder of the Missionaries of Charity (MC) based in the Indian city of Kolkata (Calcutta), but she could not meet them until 1993 when the Vietnam government allowed her to come to Ho Chi Minh City.

During her five visits to the communist country from 1991 to 1995, Mother Teresa and Sister Nirmala, who would later succeed her, admitted 20 Vietnamese women into the Missionaries of Charity. They stayed with these women when visiting, praying with them and sharing their spiritual views. Mother Teresa also sent eight nuns to care for orphans and disabled children in Vietnam.

The Blessed Mother tried to work with government officials to allow her to set up a convent in the city and send seven Vietnamese women to train at her congregation in India.

After the government refused to accept her request and asked the eight nuns to leave the country in late 1995, Mother Teresa asked Bishop Nicolas Huynh Van Nghi, apostolic administrator of the archdiocese, to take MCC as a congregation under the archdiocese's administration. The bishop agreed in 1996.

Mother Teresa promised that MCC members would be welcome to merge with Missionaries of Charity, once it was established in Vietnam.

In her 2006 visit to Vietnam, Sister Nirmala saw the rapid development of the Missionaries of Christ's Charity and recognized it as an independent congregation. With the Vatican's approval, Cardinal John Baptist Pham Minh Man officially established the MCC in 2009.

"Although we are not a member of the Missionaries of Charity, we intentionally live by Mother Teresa's spirituality," said Sr. Mary Martin Nguyen Thi Kim Hoa, a member of MCC's advisory board. "We have to take one more vow of selfless service to the poorest of the poor, out of vows of chastity, obedience and poverty,"

Hoa said, "Blessed Teresa Calcutta loves us very much and prays for our growth." Since Mother Teresa's death, many young women have joined the congregation that now numbers 150.

She said the government has just allowed them to set up a home for elderly women in Dong Nai province. The congregation runs five homes in five provinces, serving 170 elderly women.

The nuns also care for pregnant women without husbands, their children, and orphans, people living with HIV/AIDS and abandoned elderly women. They provide basic education to children from poor families in remote areas and teach catechism classes at parishes. They have plans to start taking care of people with physical disabilities in the future.

MCC already has communities in France and the United States. 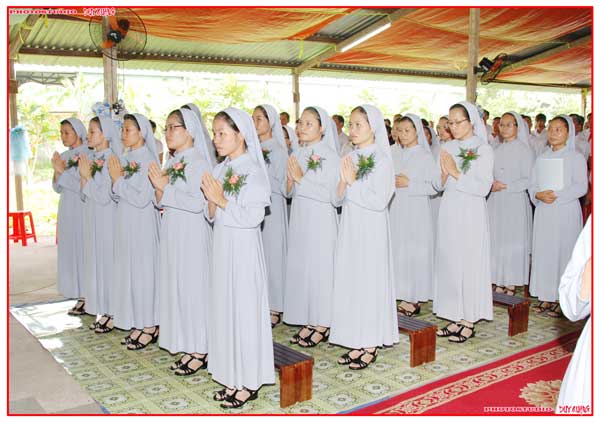 Missionaries of Christ's Charity nuns take vows at a ceremony in 2014. (Courtesy of MCC)

Serving the poorest of the poor with Christ's love

Hoa, who has headed the Love Home for Elderly People in Cu Chi District for 14 years, said 20 nuns take tender loving care of 70 women aged 65 to 106 at the home, including two younger ones who suffer mental disorders. Thirty-nine of them are confined to beds or wheelchairs because of bad health.

The home only admits elderly women who are without property and relatives. The nuns collect them from hospitals, fields, garbage dumps, cattle houses and cemeteries. Some are sent to the home by local government authorities. A few were abandoned by their fathers, who were former French and Japanese soldiers and left Vietnam.

Hoa said these women used to suffer starvation, unfair treatment and physical abuses; they live in slavery and poverty and lacked access to clean living situations. They suffer from eye problems, diabetes, mental disorders, physical disabilities, skin ulcers, paralysis and other diseases — and other charities refuse to admit them.

"So when they have just been admitted to the home, they are suspicious of our care and shout at us," Hoa said, while massaging the legs of a woman lying in bed. "I tell them we are Catholic nuns and want to care for them."

The nuns feed and bathe them every day, check their health conditions and give them medicine or take them to hospitals. Some of the more active women say prayers and do some housework.

"We love, respect and treat them as we would our parents; we listen to their problems and meet their material and spiritual needs so that they can live in peace and with dignity in their last days," Hoa said. The nuns help them to forgive and reconcile with their relatives. So far 35 women have returned to their relatives' homes, and nearly 100 people have died peacefully.

"Through our service, the women also love and respect us. They treat us as their daughters," said the nun. 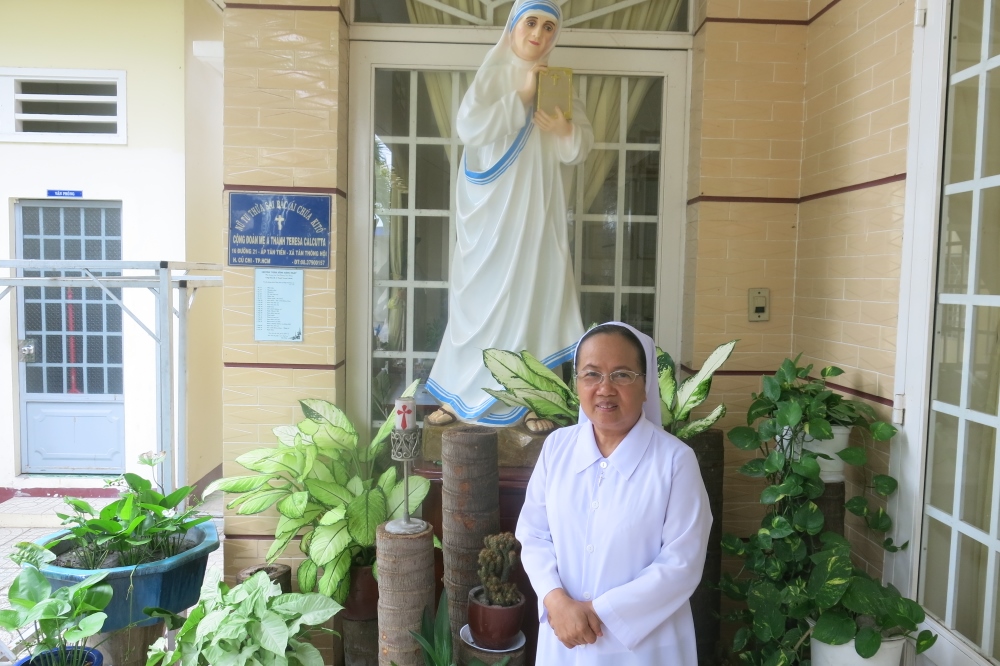 After having an eye operation, 93-year-old Huynh Thi Dien said she asked who Sr. Hoa was. When she saw Hoa, she said, "I imagined you were a big tall woman but you are very small with a great heart."

Hoa said the 20 nuns serving at the home are in their 20s to 40s and have finished courses in pharmacy, nursing care and herbal medicine. They start their work at 4 a.m. and take turns caring for the women at night.

At one time she employed three women to work at the home, but they lasted only one hour and left because they could not bear cleaning up after the patients and bathing them, she said.

"Without real love, you can't look after them," Hoa noted.

The impact of the nuns' service permeates levels of society. Many benefactors, including followers of other religions, visit the home and offer money and gifts to the women.

Pham Thi Tuyet Mai, a Catholic woman who often visits and cooks free meals for the home, appreciated the selfless work of the sisters. "I want to do something helpful to cooperate with the nuns in taking care of the elderly people," she said. She also tries to expand Mother Teresa's spirituality by inviting her friends to console and give gifts and food to the elderly women.

Mai, whose husband left her because she has no child, treats Hoa as her older sister and shares her joys and sorrows with her. 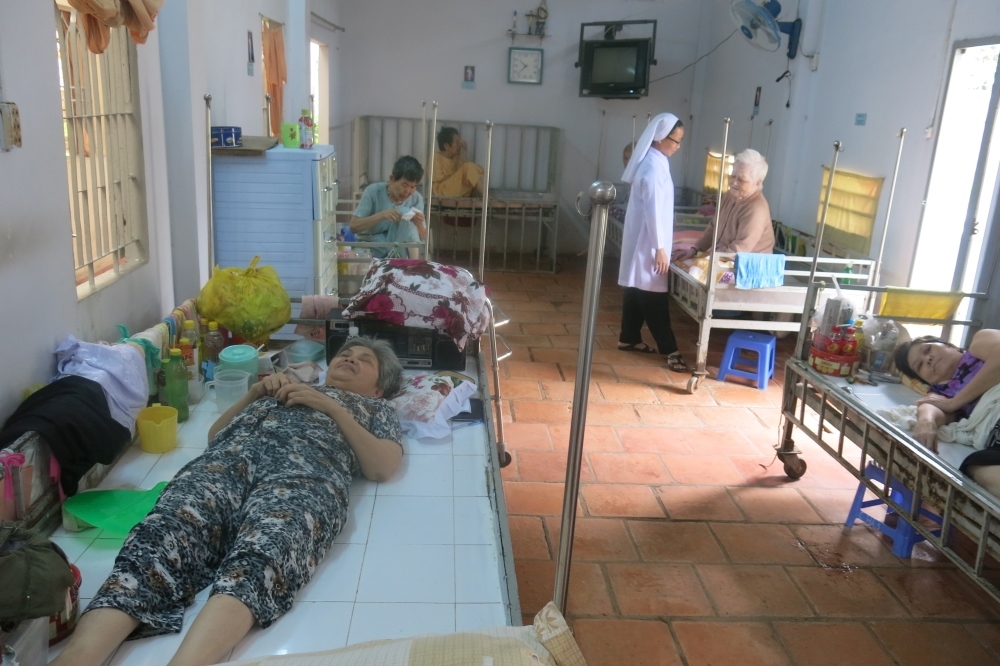 MCC nuns care for sick women who have been confined to bed for years. (GSR photo / Joachim Pham)

Fr. Paul Nguyen Van Khi set up the home for local elderly people without relatives in 1988, and entrusted the home to MCC members in 1999.

"I am very pleased to have the nuns care for elderly people at the home. They help pervade charitable service initiated by Mother Teresa throughout the country," he said.

Officials, including Prime Minister Nguyen Tan Dung, have given credit to the nuns for serving the abandoned.

However, it is not easy to get government permission to expand their activities. MCC has lodged appeals with authorities for years to build a home for elderly people in a northern province but have been refused.

The relevance of religious life today