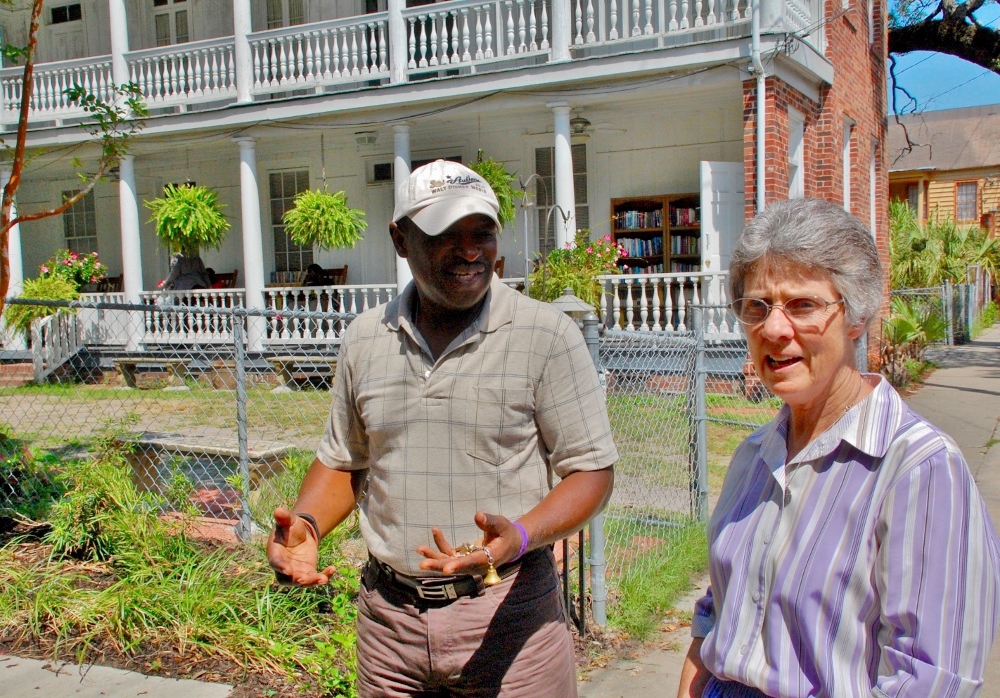 Neighborhood House Director Nikki Grimball, left, and Sisters of Charity of Our Lady of Mercy Superior General Mary Joseph Ritter speak in front of Neighborhood House in Charleston, S.C. Behind them can be seen the reading porch, a shady haven where people are welcome to come and read donated books. (GSR photo / Dan Stockman)

Charleston, South Carolina — Those not from the area probably would not recognize the Neighborhood House as a center to serve homeless people in a troubled neighborhood.

The church above the basement soup kitchen and the Italianate-style house next door look like any others in a city filled with homes and buildings from the 18th and 19th centuries. This neighborhood, like others, has tree-lined streets and porch-wrapped houses.

But make no mistake: The need here is tremendous. The Neighborhood House soup kitchen feeds lunch to up to 80 people a day. The clothing center helps up to 25 people every day while 10 people a day are taking GED or computer literacy courses. Up to 12 people a day use the food pantry, and five or six new people a day come to get financial assistance — a number that often doubles at the end of the month when bills are due and money has run out.

"The need never ends," says Nikki Grimball, Neighborhood House director. "I've got 100 people at the table and 100 waiting at the door."

The way the Sisters of Charity of Our Lady of Mercy in Charleston respond to that need has changed dramatically in recent decades. Founded in 1829, the congregation had 110 sisters at its peak in the 1960s. Now there are 14. The army of workers to serve simply isn't there anymore.

Those partnerships let the religious community do as much, or more, than when it had dozens of sisters at its disposal. Our Lady of Mercy Community Outreach is a registered nonprofit with a $2.7 million operating budget that serves more than 11,000 people a year. The largest effort is on Johns Island, where it has a health and dental clinic and the largest program in the country that teaches English to speakers of other languages. Founded in 1989, just two weeks before Hurricane Hugo devastated the area, the organization took over operating Neighborhood House from the Charleston diocese in 2005.

And the partnerships go beyond those between Our Lady of Mercy, nonprofits and governmental agencies. Along with Our Lady of Mercy Sr. Rosemary Boyd, sisters from other congregations volunteer there, as well, including Dominican Sr. Mary Trzasko and Franciscan Srs. Noreen Buttimer and Pat Rogan.

"I think that's where our strength comes from," Grimball says. "Those partnerships build on everybody's strengths." 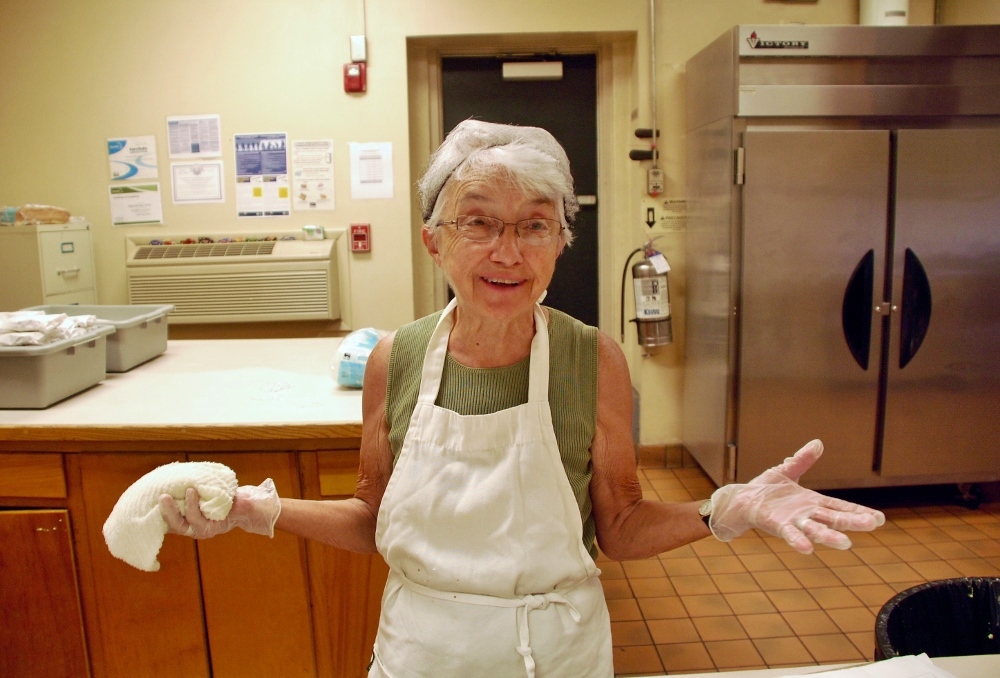 Dominican Sr. Mary Trzasko works in the kitchen at Neighborhood House helps prepare lunch for up to 80 homeless who depend on meals there. (GSR photo / Dan Stockman)

One of Ritter's strengths is advocacy: In May, Belmont Abbey College in Belmont, N.C., awarded Ritter an honorary doctorate of humane letters.

"Advocacy really matters when it comes to the poor," Ritter says. "Nobody's speaking for them."

Grimball said Ritter wasn't sure about assuming the role of public advocate at first, until there was a zoning or permitting issue.

"When Sister Mary Joseph came here, she said, 'Lord, let me be careful so I don't end up in front of Congress.' She's a fighter," Grimball says with a laugh. "But the issue with poverty is political. It's systemic. When people think poverty, they think finance. They think it's just a lack of money. But we're putting bandages on broken legs until we change our processes."

While Neighborhood House works to solve immediate needs with services like the soup kitchen and financial assistance, it also tries to meet longer-term needs with education efforts and more intangible — but no less important — things such as self-esteem.

"It's that feeling that 'I'm worth an investment,' " Grimball says.

To that end, the small courtyard between the church building and the house is kept as a landscaped oasis of shade and flowering plants. The big porch on the house is known as the reading porch and is home to several rocking chairs and shelves full of donated books. Both provide a cool, clean and welcoming respite from the steaming heat of a Charleston summer.

Neighborhood House officials got an up-close look at how much self-esteem matters recently thanks to AmeriCorps volunteer Tara Lavelle. There was a homeless man who came to the soup kitchen a few times then disappeared for about six months. When he returned, Lavelle greeted him by name and said it was good to see him again. 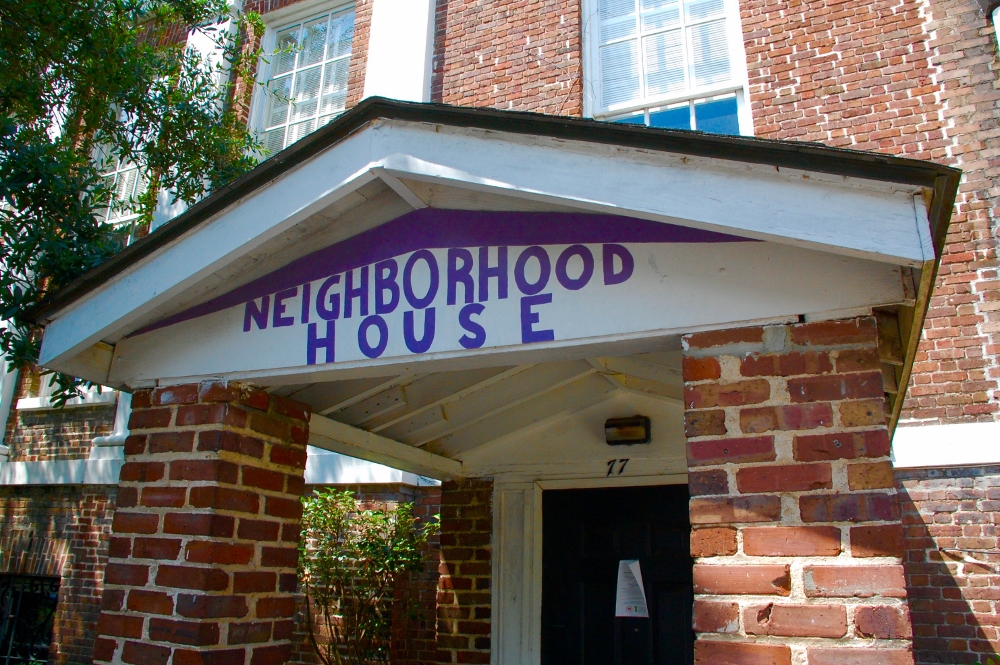 Neighborhood House in Charleston, S.C., is run by Our Lady of Mercy Community Outreach, a non-profit started and run by the Sisters of Charity of Our Lady of Mercy. (GSR photo / Dan Stockman)

"He started crying," Grimball recalls. "He said, 'I don't hear my name. Do you know how long it's been since someone called me by name?' Everyone has a desire to be loved and to progress. Our success is measured on the impact we make person by person."

Trzasko says it's also a matter of second chances. And third. And fourth.

"We've helped [Neighborhood House client] Iris over and over and over," Trzasko says. "But this might be the time it makes a difference. We can never give up on anybody."

They can also never give up, it seems, on changing their ideas of how to serve the poor. Because most soup kitchens rely on donated food, the meals they serve are often not the healthiest. This does nothing to help a population already suffering from health problem and nutritional issues and only reinforces the idea of fatty, processed food being "normal."

So on Thursdays, the kitchen takes extra efforts to serve a healthy meal, where food is baked instead of fried and there are more good-for-you items like brown rice, fruits and vegetables. Then, volunteers over the weekend glean up to 500 pounds of unwanted produce from organizations that would otherwise be throwing it away, and college students host a Monday Market where they not only make the produce available, but teach people how to cook with it or use it in healthy salads.

But nothing is easy.

The summer of 2014 was extremely hot — even by Charleston's high standards — and Neighborhood House officials realized the homeless had no access to water. Companies were happy to donate sugary sodas, but no one, it seemed, wanted to donate water. Neighborhood House officials proposed putting a public drinking fountain and water-bottle-filling faucet in front of the soup kitchen to make water available 24 hours a day.

"The city immediately said, 'No, it can't be done,' " Grimball says.

But they didn't give up, and after nearly a year of paperwork, permitting, approvals and waivers, the fountain was installed. Neighborhood House officials then challenged the city to do the same, and another was installed in a city park.

Grimball said the trouble it took to get the fountain shows just how difficult the issues can be: A relatively simple solution to a very real, very life-or-death problem for the homeless should not take nearly a year to become reality, he says. But when the system is set up to serve the system instead of people, the poor are left behind.

The rewards, however, go beyond just meeting immediate and even long-term needs.

"I feel my salvation depends on me being here," Trzasko says. "You sit in your office somewhere and don't know what people are experiencing." 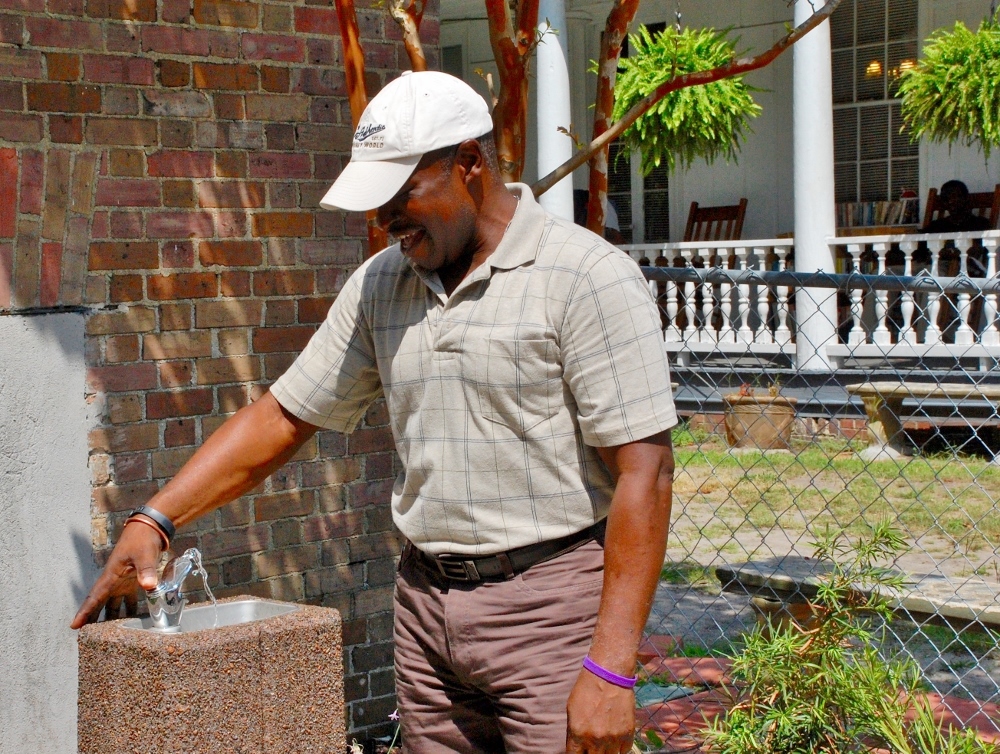 Neighborhood House Director Nikki Grimball shows off the public water fountain installed outside the facility after officials realized homeless in the area had no public access to water. (GSR photo / Dan Stockman)

Q & A with Sr. Virginia McCall