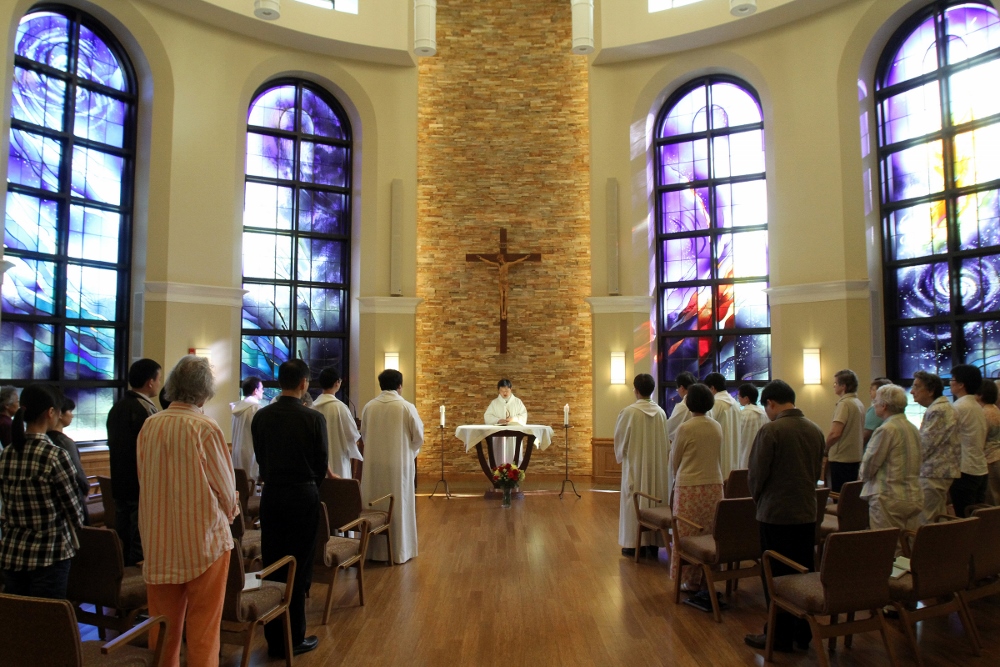 Chinese priests and nuns gather with retreat center staff for Mass at the Cenacle Retreat Center in Ronkonkoma, N.Y., Aug. 20. The retreat was affiliated with Maryknoll's Chinese Seminary Teachers and Formators Project. (CNS photo/Gregory A. Shemitz)

Ronkonkoma, N.Y. — As Pope Francis' plane was cruising through Chinese airspace in mid-August en route to his first visit to the Far East, 20 Chinese priests and nuns were assembling halfway around the globe at a retreat house in the United States, preparing to begin a week of quiet prayer and reflection.

The gathering at the Cenacle Retreat Center in Long Island, N.Y., was affiliated with the Chinese Seminary Teachers and Formators Project, an initiative launched by Maryknoll Fathers and Brothers in 1991 to help train priests and women religious for various leadership roles in the church in China.

"It's Maryknoll's way of cooperating with the Chinese bishops and religious superiors to help the church in China grow," explained Maryknoll Fr. Larry Lewis, who has been involved with the project for 21 years.

The Chinese participants in the program "are under a lot of pressure in this country, studying for a master's or doctoral degree in another language," said Lewis, former project coordinator. "This gives them a chance to leave that pressure behind."

Most of the summer retreats associated with the project have been preached retreats, allowing for interaction between retreatants and presenters. This year's, however, was a directed silent retreat, where each retreatant met one hour a day with a spiritual director who recommended Scripture readings and provided individual counsel. The rest of the day, between meals, was spent in solitary prayer and reflection, with the group gathering for Mass before dinner.

"Part of the whole experience here, and we know this from being missionaries and going abroad, you have an opportunity in another culture to see yourself differently, see your faith differently, see the church differently," Lewis said. "Being in an unfamiliar situation, you don't have the usual escapes at hand. It's very important the spiritual immersion that we offer through the retreat help them look at that and learn from that. It's a wonderful experience."

Maryknoll Sr. Janet Carroll, who has been involved with the project from the beginning, said the retreat is a welcome respite for the priests and nuns. The self-imposed and cultural pressure to excel in a foreign environment can be overwhelming, she said. 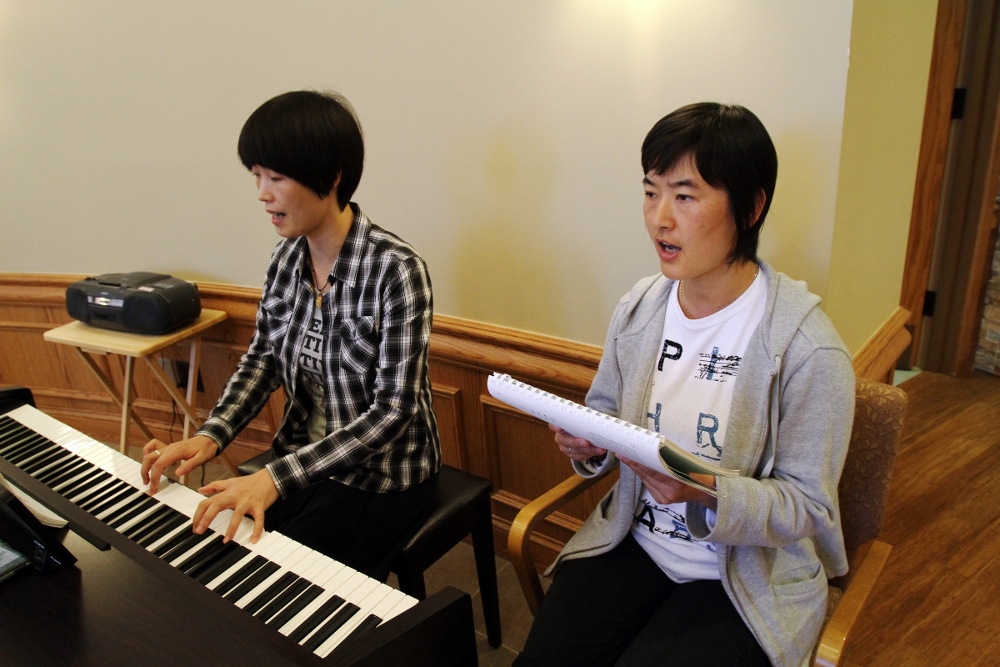 Chinese Srs. Jean Qi Zhi Zhen, left, a member of the Sisters of St. Theresa of the Child Jesus, and Paulina Feng Shuang, a member of the Fushun Sisters of the Sacred Heart of Jesus, lead the music during Mass at the Cenacle Retreat Center in Ronkonkom a, N.Y., Aug. 20. (CNS photo/Gregory A. Shemitz)

"They have to study five times as much as a regular student every waking hour," Carroll said.

Chinese participants are handpicked by their bishops and religious superiors to continue their higher education in the U.S. under the auspices of a Maryknoll-appointed project coordinator, who directs them to schools that offer advanced degrees in coursework relevant to the needs of their dioceses and religious communities.

Areas of study include canon law, liturgy, spiritual direction, church history, pastoral counseling, ethics, family therapy and social work. Most participants enroll in master's programs, while some work toward doctoral degrees. Before being accepted into the program, candidates must possess a bachelor's or equivalent certification.

The biggest obstacle participants face when arriving in the U.S. is the language barrier. In order to succeed in the classroom, they must be proficient in English. So following their orientation at Maryknoll headquarters in New York, participants immerse themselves in English as a Second Language classes for a few months before they transition to their chosen college or university. 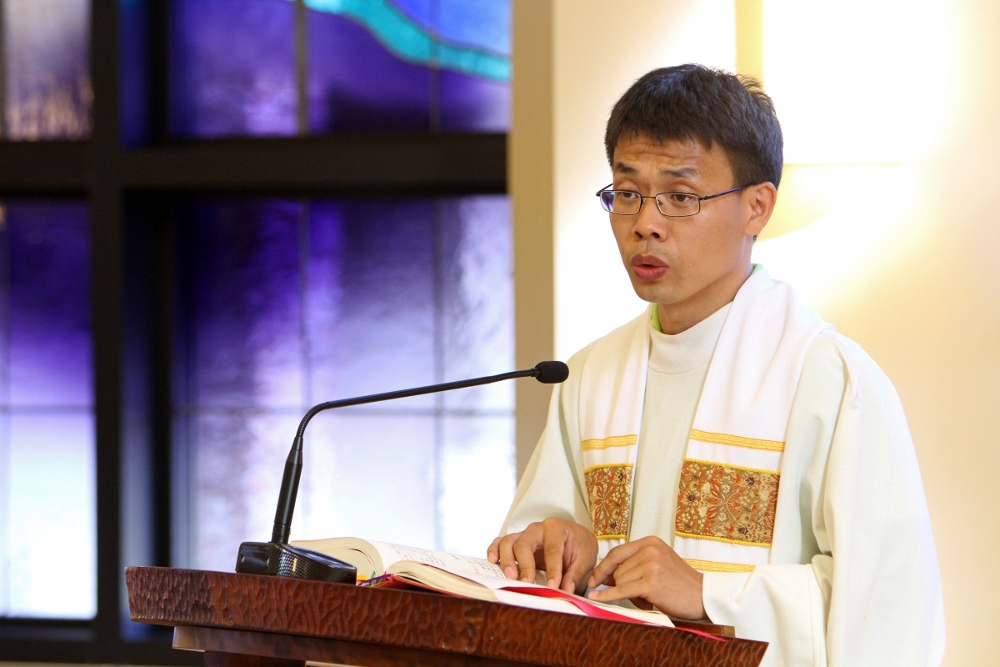 Fr. Joseph Su Xin of the Diocese of Baoding, China, proclaims the Gospel during Mass at the Cenacle Retreat Center in Ronkonkoma, N.Y., Aug. 20. Su, a participant in Maryknoll's Chinese Seminary Teachers and Formators Project, is pursuing a master's degree in spiritual direction at Fordham University in New York. (CNS photo/Gregory A. Shemitz)

Graduates of the program also minister in the public square, serving people of all faiths or no faith, spreading the Gospel message through their various skill sets.

"One of our priest-graduates started the first social center in Xi'an [more than 10 years ago]," Lewis said. "And it's still going strong."

Project participants also convene each year between academic sessions at Maryknoll in late December for a one-week seminar that focuses on such topics as interreligious dialogue; domestic violence; AIDS education; hospice care; and addictions to sex, alcohol, drugs and gambling.

The summer retreat and winter seminar provide an opportunity for the priests and nuns to connect with one another and to develop friendships that many maintain when they return home.

Lewis said the fraternal spirit generated in the U.S. bears fruit for the church in China. 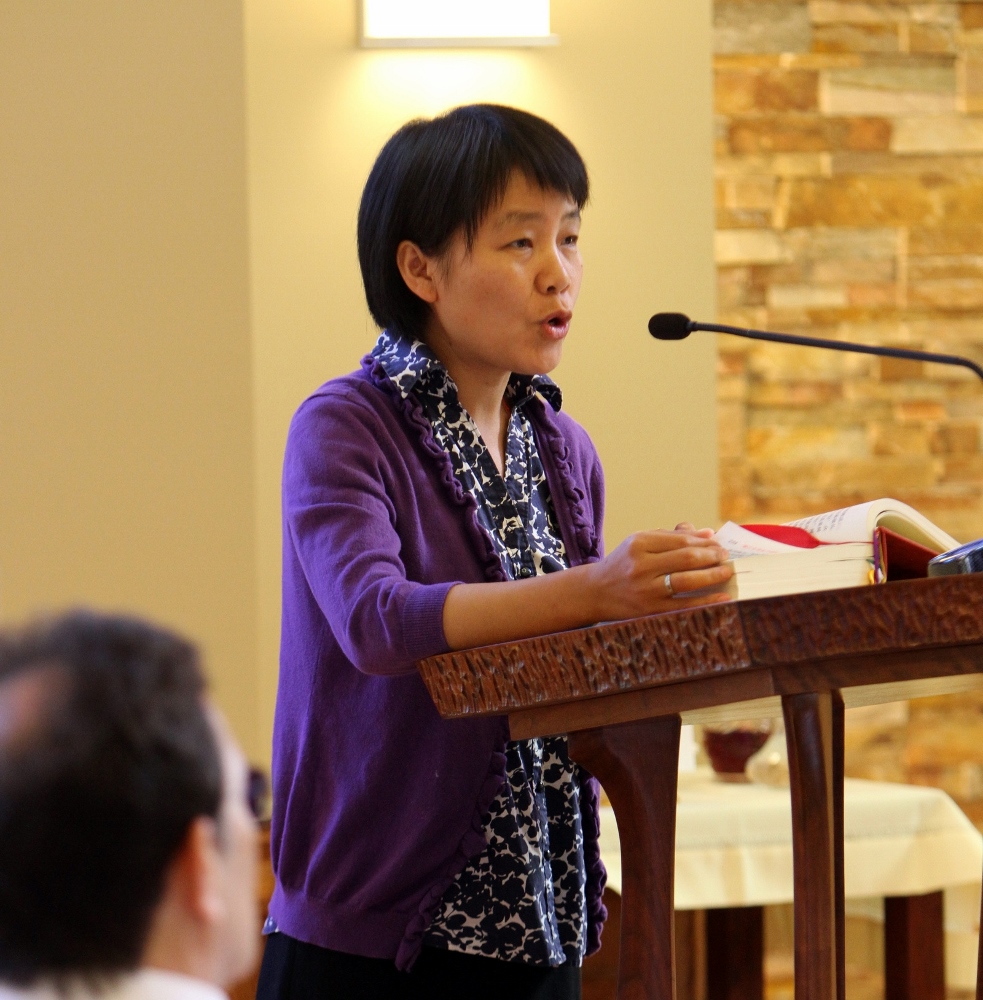 Sr. Clara Zhang Jin Ping, a member of the Sisters of the Blessed Virgin Mary in Hanyang, China, serves as a lector during Mass at the Cenacle Retreat Center in Ronkonkoma, N.Y., Aug. 20. Zhang, a participant in Maryknoll's Chinese Seminary Teachers and Formators Project, is pursuing a master's degree in pastoral ministry and social work at Boston College. (CNS photo/Gregory A. Shemitz)

"They invite each other to give seminars and lead retreats and teach courses," Lewis said. "Last year they had an official reunion of alumni in China."

Because of the intensity and duration of the program, participants are required to go home for a month or two, midway through their stay, to reconnect with their dioceses, religious communities and families.

"China is changing so rapidly, so it's important to keep them in contact with their dioceses and religious congregations," said Lewis. "That's been a huge factor in helping them remember why they're here. They're here to go back."

Maryknoll's annual budget for the project is $700,000, said Lewis. The society pays for participants' travel expenditures; medical expenses not covered by the sponsoring institution or religious community; tuition costs not covered by scholarships; and costs associated with the annual retreat and seminar. The project also pays for the project coordinator's assistant, who handles the daily administrative duties.

As with many religious communities, Maryknoll has fewer personnel as a result of the decline in vocations to priestly and consecrated life. The project, however, has helped the society continue its evangelization efforts in a country its missioners first visited in 1918.

"I have tremendous respect for this project," said Lewis. "I think it's a very sane way of doing mission now."

Carroll concurred: "We are able to do what Maryknoll was founded to do, which is to support the local church and to build up the local church. In lieu of having our own men and women live and work in China, we're able to channel the money directly into the church in China."