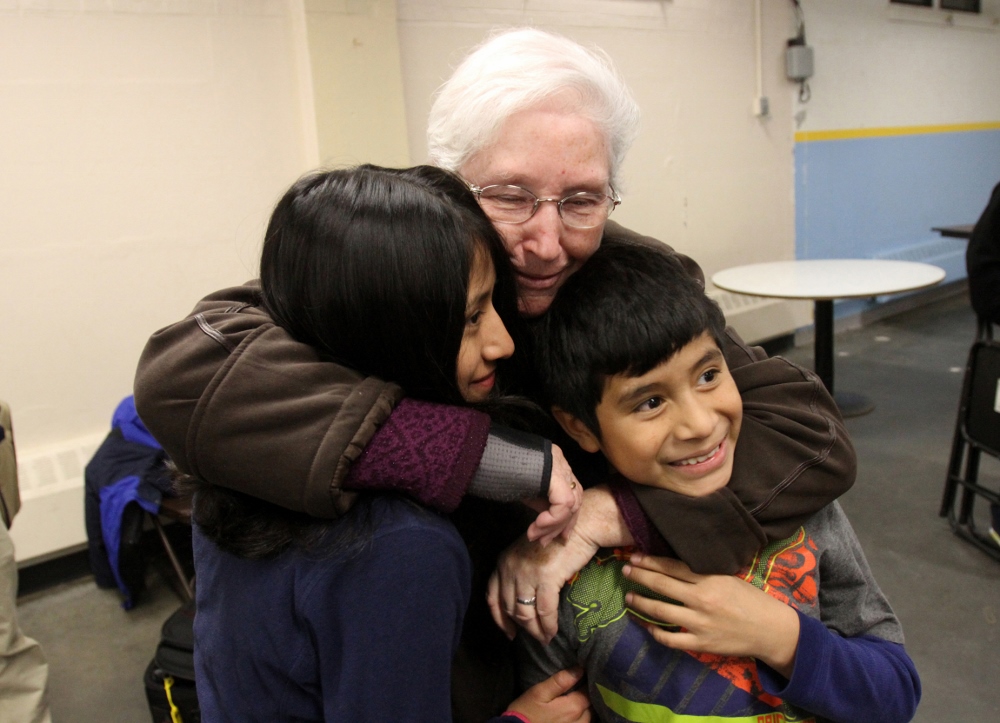 Riverhead, N.Y. — At a stage in life when most people her age have eased into retirement, Sister Margaret Smyth shows no signs of slowing down.

Nearly six decades after answering the call to religious life, Smytht, 75, is still going strong, ministering to a large population of Latin-American immigrants who live and work in the eastern region of Long Island.

A member of the Sisters of St. Dominic of Amityville, Smyth is director of the North Fork Spanish Apostolate, a position she has held since 1997, when the Diocese of Rockville Centre hired her to provide outreach to a rapidly growing number of foreigners arriving from Central and South America.

Having previously worked as a teacher, principal and religious education director in schools and parishes in the Diocese of Brooklyn, Smyth enthusiastically embraced the opportunity to use her Spanish-language skills to welcome and work with immigrants settling on the East End.

"It was up to me to figure out what to do," recalled Smyth. "It was different. The people needed somebody. It was a challenge."

Smyth faced the challenge head-on and, over the course of 18 years, built a faith-based support system that has tended to the spiritual, material and emotional needs of thousands of immigrants.

Operating out of an office in the former school building of St. John the Evangelist Church in Riverhead, Smyth typically works six to seven days a week — days and evenings. Her wide-ranging responsibilities fall under two categories: church ministry and social services. 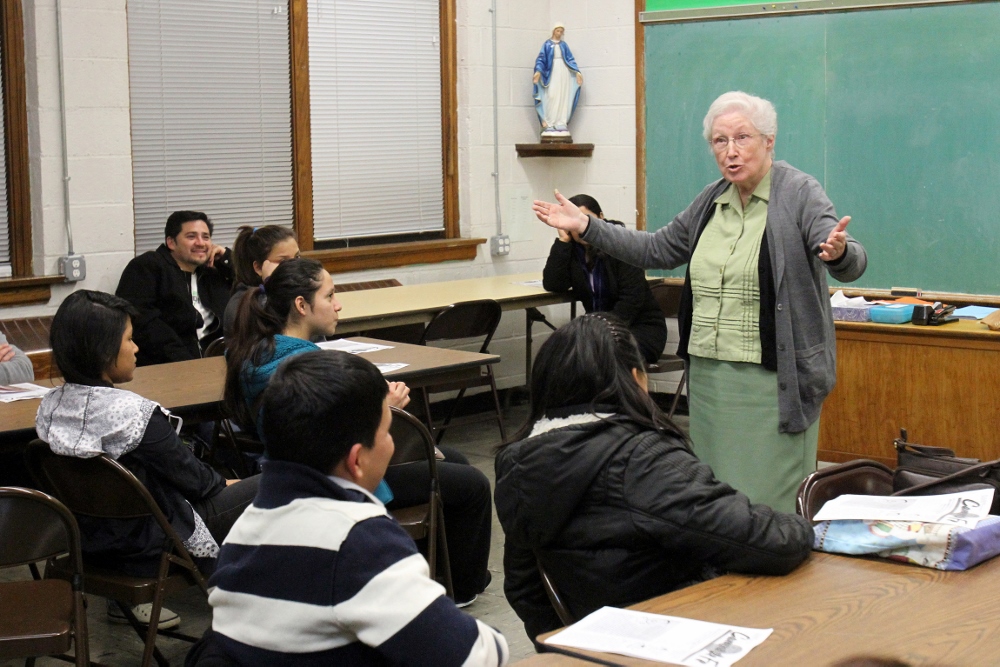 Despite her heavy workload, Smyth said her ministry continues to give her joy and satisfaction.

"Sometimes I say to myself it would be nice not to run out every single night," she told Catholic News Service. "But on the other hand, when I get to where I'm going, I see the growth in the community. I see things that I can do a little bit less of, because I'm teaching people to do things for themselves."

Christopher Worth, a Riverhead-based attorney specializing in immigration law, has worked with Smyth and sees the special connection she has with the people she serves.

"From everything I've witnessed, people trust her very much with all types of things," Worth said. "She teaches people how to save money, how to find work, how to stay (in the U.S.) legally, and how to stay out of trouble. One of the biggest things she does is to make them feel welcome and feel part of a community."

Recipients of Smyth's support include, among others, farm, vineyard, restaurant, landscaping and construction workers, and people who assist with child and elder care.

Consuelo Ludlum, a retired teacher who has volunteered in Smyth's office for 10 years, has seen the Dominican sister confront employers who have tried to take advantage of immigrants by denying them just wages, or have used the threat of deportation to intimidate them. There also have been incidents where workers have been victims of sexual harassment. 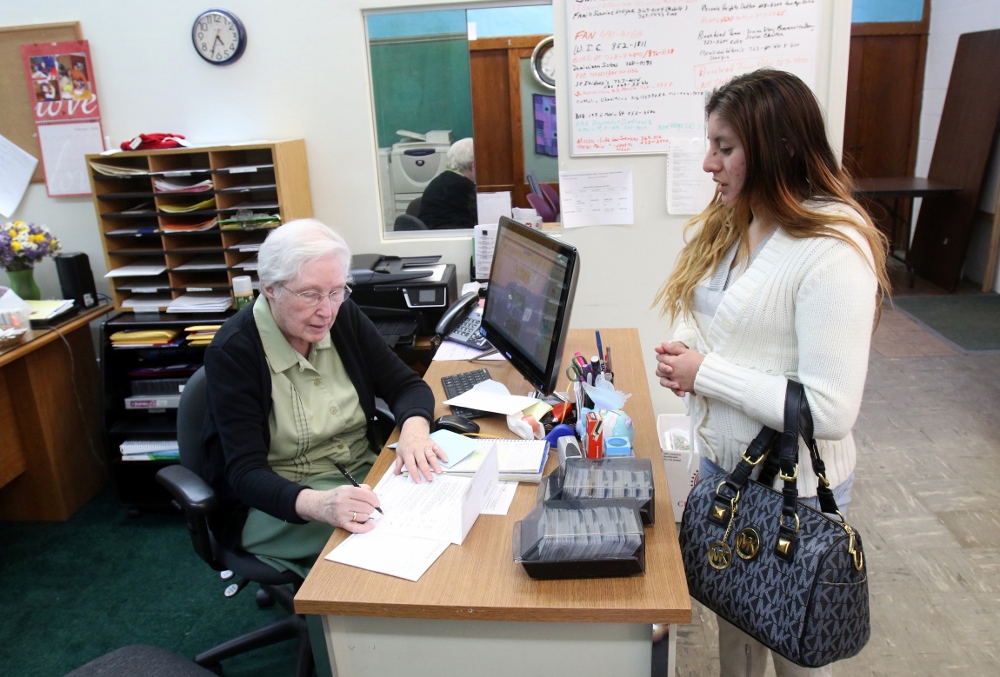 "People have come up to her face and swore at her because of her defense of the day laborers," Ludlum said. "When she has helped men and women file complaints for unfair wages, we have gotten serious calls from a number of the bosses. I've received some of the phone calls, and I've heard (profane) words I've never heard before."

They also have tried to intimidate Sister Margaret by threatening harm to her, according to Ludlum. "They will say, 'Something will happen to her,' or 'These people aren't worth her time.' Sometimes those situations can be very volatile."

Smyth has the ability to diffuse many difficult situations she deals with throughout the day. However, the most challenging part of her work, she said, is to remain "patient" with everyone who seeks her counsel.

"It's a challenge to remain upbeat after a day of going nonstop," said Smyth, who in addition to her apostolate work oversees St. John's parish social ministry, which includes a busy food pantry. "We literally finish with one person and the next one comes in. There's a lot of volume. I want to stay as upbeat as possible and give everyone good direction."

Ludlum marvels at how Smyth seems to effortlessly manage her workload. "I don't know where she finds the energy, other than to say it's God-given," the volunteer said. "She rarely complains that she's tired. I've never heard her say that she's tired. I've heard her say that she doesn't have enough time to do what she has to do, which is slightly different."

Smyth credits her bloodlines for the energy she maintains as septuagenarian. "It's genetic," she said. "My mother was jumping rope when she was 69. I come from a pretty energetic family. Fortunately, I'm healthy."

One of three siblings born to immigrant parents from Ireland, Smyth grew up in the borough of Queens. She learned at a young age that people from other countries weren't always welcomed with open arms.

Smyth said her family was forced to move from their apartment in the wake of daily harassment from their landlady. Whenever Smyth's mother left her apartment, the woman would immediately appear with a broom. 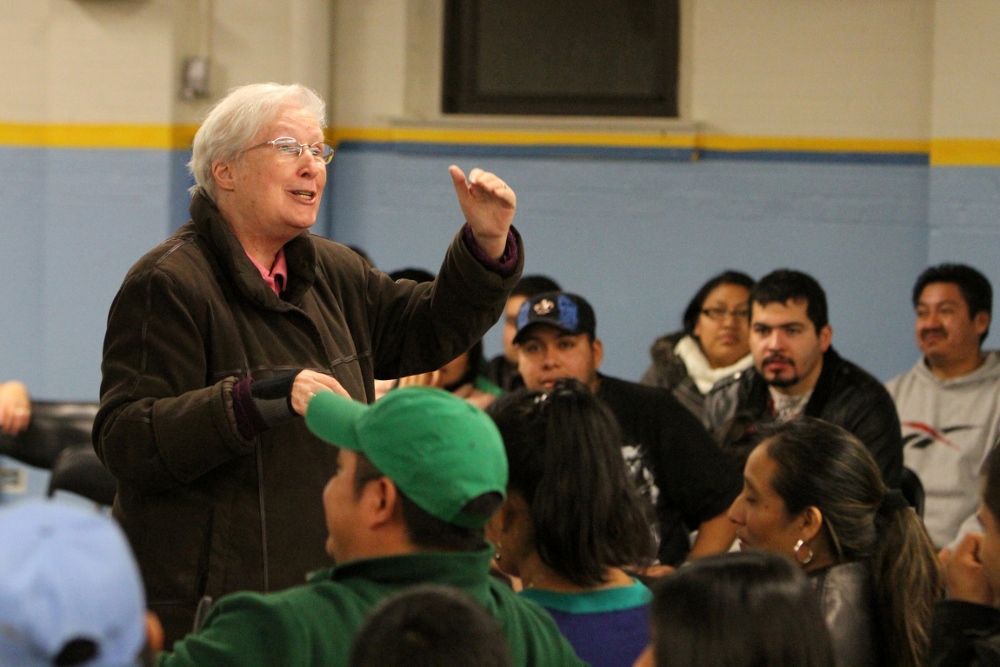 "My mother couldn't walk the hallways without the woman sweeping behind her, as if my mother were dirty," Smyth said. "And my mother was a fanatic about cleanliness!"

"All immigrants share basic situations," she noted. "It doesn't matter what country you come from, people come with common reasons. People come to escape poverty, oppression and persecution. They come because of total lack of opportunities. No health care, no anything."

Smyth's ministry isn't limited to Long Island. In recent years, she has joined a team of doctors, nurses and volunteers on mission trips to Honduras, where they provide medical care to the poor. Smyth facilitates communication between the medical team and the families.

"We go up into the mountains and seek out children with orthopedic problems," he explained. "She acts as a liaison. Being a nun down there is big stuff."

Farrell, who lives on Long Island's North Fork and has known Smyth for more than 20 years, admires her tireless dedication to the people she serves. "She has no intention of slowing down," said Farrell. "There's an old Irish expression: 'We work while the light lasts.' And that's exactly what she's going to do."

Smyth, who's been a religious for 58 years, said she isn't contemplating retirement at this point. However, when asked how long she can see herself working, she responded, "Maybe five more years."

"I'd like to see where I am in five years," she added. "It may be next year. Who knows? I can't predict my health. Right now [the ministry] still gives me joy. I enjoy helping people, getting them to laugh, or giving them a solution to a problem. That keeps life very electric."

LCWR 'ashamed of the church we love' after abuse report