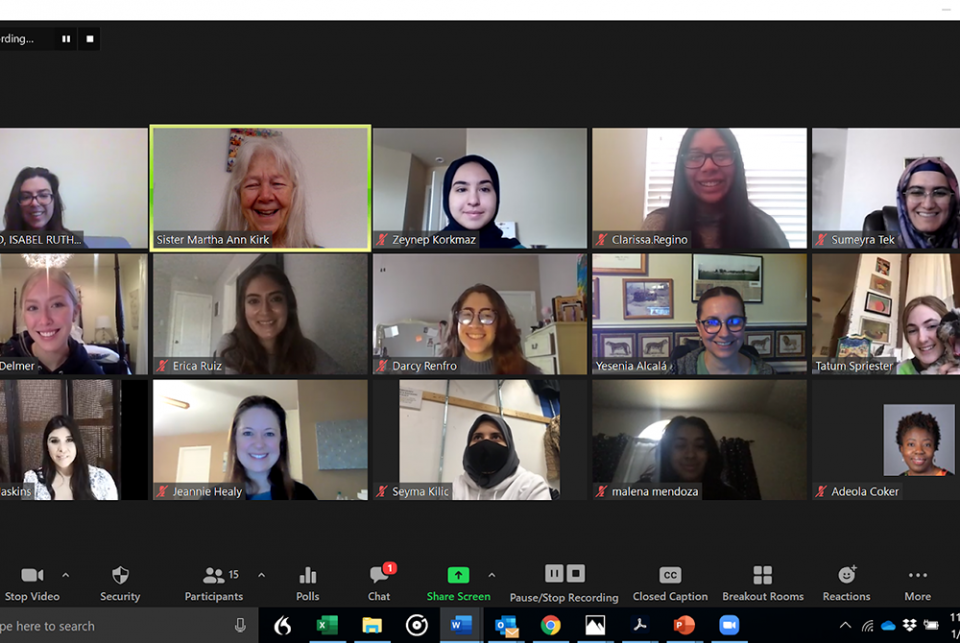 Young women of "San Antonio to UN" are pictured in their weekly Zoom meeting. The group presented virtually at the United Nations' NGO CSW Forum in March. (Courtesy of Martha Ann Kirk)

Tatum Spriester, a senior (now a graduate) at the International School of the Americas — who is interning with me at the University of the Incarnate Word — noted, "This year felt like the end of the world; for separated friends and family, for the United States political climate, and for what normalcy means in our daily lives. The world seemed to crumble around us."

My religious congregation was started during an urgent need for public health care — after about 10% of San Antonio had died of plagues in the 1800s. Immigrants from about 20 countries were the seeds of the Sisters of Charity of the Incarnate Word of San Antonio in the 1800s and early 1900s.

When we sisters started the Women's Global Connection ministry in 2001 we had no idea that the seeds would grow and blossom with young people in conversations with 25,000 participants from various countries all over the world! This happened at the UN's NGO Forum for the Commission on the Status of Women in March 2021.

The Women's Global Connection had been founded in partnership with the University of the Incarnate Word to encourage education and research in the global community, particularly in the least-advantaged regions of the world. Women's Global Connection has offered space for sharing women's wisdom, experience and spirituality to create a just and sustainable global community.

As Tatum explained, "Back in December, as 2020 came to a close, a group of 12 of us gathered on Zoom to discuss the dissatisfying year behind us. The joining thread between us was involvement with the Girls Global Summit, an event sponsored by the Women's Global Connection, which brought together about six months of leadership development. We loved the empowering program that had gone on for the last eight years."

The December gathering had included youth from Turkey, Azerbaijan and Mexico, as well as the United States. The girls longed for another experience like the six-month leadership program in which they built community, learned, researched, and did a final presentation on what they considered significant aspects of gender justice to an audience of a few hundred local girls and their friends. As can be seen in the pictures here, the Girls Global Summit has been a flagship program of Women's Global Connection. The year 2020 saw the end of Women's Global Connection as an autonomous entity, but we hope that the University of the Incarnate Word will embrace transformative feminist liberation theology, and the educational theory underlying it.

"The dawn of the era of coronavirus has forced people to become innovative and flexible with the ways we meet. More so than ever, girls have needed a place to be empowered this year," Tatum reflected.

Several faculty who knew how valuable the experience had been hoped that young women might have a virtual opportunity in this hard year.

Tatum reported: "Our small group of 12 grew into a kind of dream team of feminist activists and global scholars from around the city, with friends even as far away as Kenya, Uganda and Peru." Young women from seventh grade through graduate medical students told us what they wanted to research and share about. They mentored each other and — as needed — university and high school educators also mentored and encouraged them. In our lonely isolation, all wondered if anyone would see, if anyone would appreciate our research.

Amazingly, when March 19 and 20 came, it became clear that we had not worked together for almost three months in vain. Women and women's allies from Azerbaijan, Brazil, Germany, Indonesia, Kenya, Korea, Mexico, South Africa, Turkey, Uganda, United Kingdom, the U.S. and other places showed up in our Zoom rooms. We could share ideas, discuss and make new global friends.

Some students worked together on "Human Rights Advocacy: Educating and Empowering Women's Voices." The students presenting promoted solidarity with the Shipibo women in the Amazon. Our UIW students on trips to Peru have met some of these women through our Incarnate Word Sr. Katty Huanuco, whose ministry has included encouraging them. Click that link to see her and 14 of us from our university with them in Lima, Peru when we were on a Women's Global Connection service trip.

Yesenia Alcala, a UIW doctoral student, regularly gets news through both film and text from the Shipibo women, and we promoted their crafts in the UN NGO "virtual marketplace."

Tatum and other young women, especially former interns, wanted to bring riches from what they learned in the leadership program to the world. You can listen to their testimonies as they present "Youth-Led Advocacy for Gender Equality: A Model for Global Summits" here.

Erika Haskins, a Ph.D. student in education, focused on eight years of data about experiences in the Girls Global Summit, and about being a mother of daughters involved, as she shared an in-depth look into girls' leadership. See a road map outlining how the model can be implemented in a variety of scenarios globally. These presentations on the UN NGO Forum platform were supplemented by even more research on the UN Sustainable Development Goals which we shared on a locally developed platform, March 19 and March 20.

Looking forward, we have already begun working in partnership with the African friends we made doing this and exploring how students there and students in the U.S. might learn from each other via international virtual connection. Pandemics can't prevent girls!

[Tatum Spriester is a graduate of the International School of the Americas High School, in San Antonio, Texas.]

Ministry | Young women work together to present at UN forum

Workshop explores movement away from institutional care of children