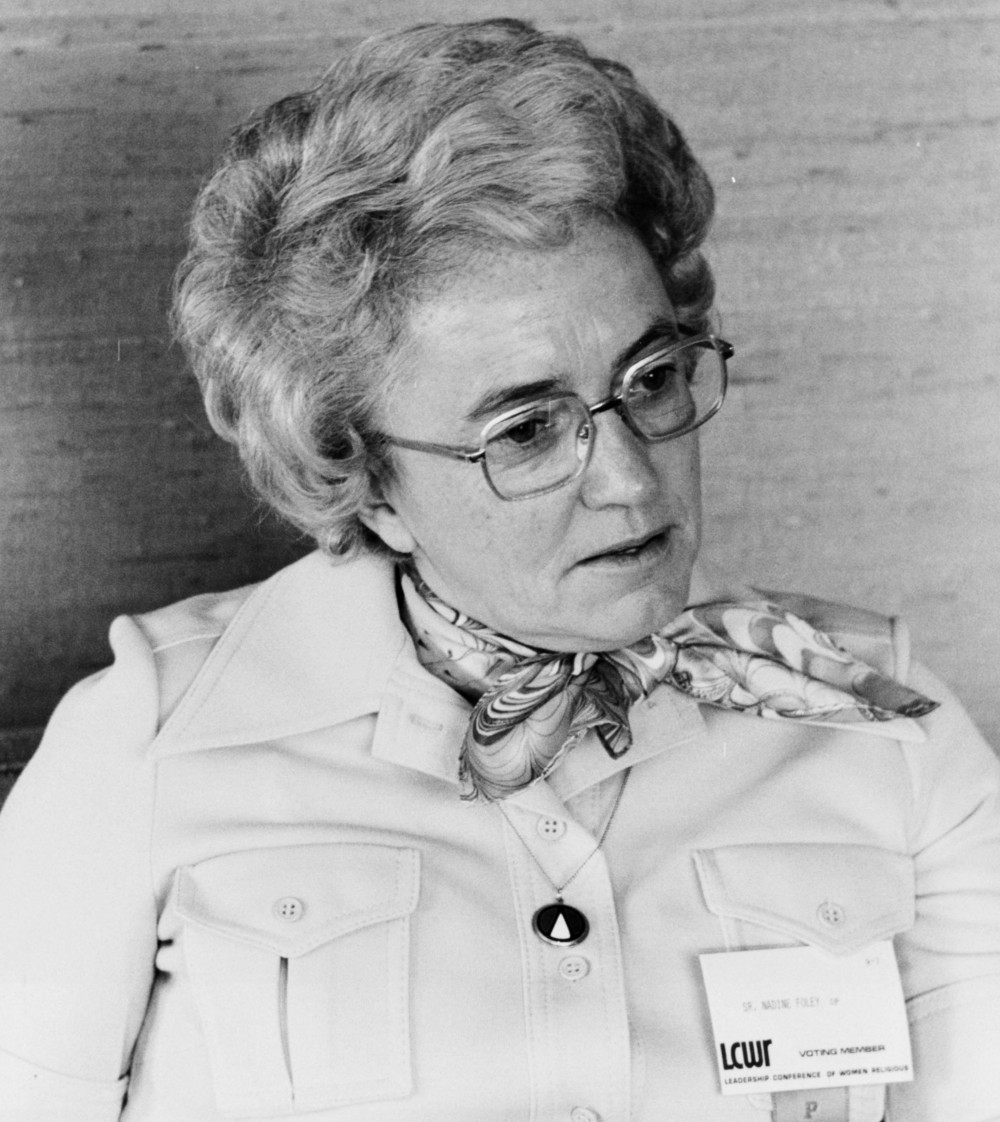 Adrian Dominican Sr. Nadine Foley at a meeting of the Leadership Conference of Women Religious in 1975 (NCR file photo)

Adrian, Michigan — Former Adrian Dominican prioress and LCWR president Sr. Nadine Foley died on May 13, 2017, her baptismal day, and one month after celebrating her 93rd birthday. An ecclesial woman of the Gospel, Nadine would have found deep meaning in entering eternal life on the date of the sacrament that brought her into the faith more than nine decades earlier.

One of the formidable figures of late-20th-century religious life, Sister Nadine's writings, talks and presentations — particularly on women in the church — were prolific. She was a strong and longtime advocate for women claiming their truth and exercising authority in church and society. She held leadership roles in the Adrian Dominican Congregation, the Dominican Leadership Conference, the Leadership Conference of Women Religious, and the International Union of Superiors General. She served as an educator, teaching religion, mathematics, and sciences for eight years in Florida and Michigan Catholic high schools, and theology and philosophy at five colleges and universities, including a visiting professorship at Harvard University.

While her accomplishments are renowned among circles of U.S. women religious, less well-known are traits of character illuminated in stories told by longtime friends and colleagues. A few are shared here in the context of a prayer she wrote for the Adrian Dominican General Chapter of 1992, based on Wisdom (Chapters 7 and 8).

Come Wisdom
bestow your gifts upon us
your Adrian Dominican daughters ...
We ask for your creative spirit —
intelligent, holy, unique,
firm, secure, tranquil.

Sister Nadine's creative spirit was vibrantly alive up to the last days of her life — as was her wry wit and sense of humor. Soon after "retiring" from her position as historian of the congregation at age 92, having just co-authored the third volume of the Adrian Dominican history, she began her next project. In January 2017, she sent members of the congregation an email soliciting entries for "a small book" she intended to write, collecting the stories sisters tell around the table at mealtime. "Some are hilarious and evoke peals of laughter. They are stories of formation years, of ministries, of family. ... We should not lose these stories because they are part of who we are." 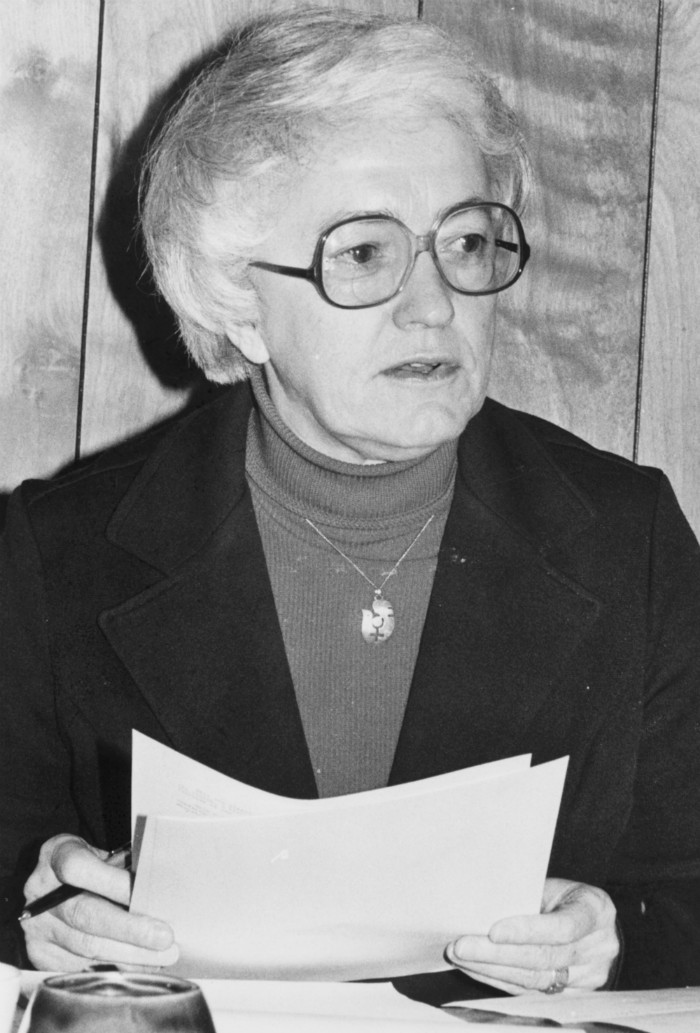 A favorite in the collection, which has yet to be published, is one she told about her own family. Sister Nadine grew up during the Depression in the small town of Newberry in Michigan's Upper Peninsula, the oldest of eight children. One morning during her first home visit, after entering the congregation in 1945 at the age of 21, she was sitting in the kitchen drinking coffee. Her younger brother Tim, then in second or third grade, was in the dining room with his friend Buzzy.

"I could hear everything being said. Someone had given Tim a picture of the priest holding up the host after the consecration. Tim was showing this to Buzzy (at the time Tim called him Buth-y). 'Buth, this is what we do in our church. The priest holds that (pointing to the host) up to the light and if it looks good he eats it.' "

Music was a lifelong creative outlet for Nadine. Her beautiful and powerful singing voice was undiminished by age; she sang with the choir as recently as Easter. Over the years, she collaborated with Adrian Dominican composer Sr. Magdalena Ezoe, writing lyrics. Among their collaborations are two hymns, "Clothe Me With Yourself, Eternal Truth," based on The Dialogue of Catherine of Siena, and "As Morning Dawns," drawn from Psalm 63, along with a just-published offertory hymn titled "On this Table." Our reception ceremony for novices always includes "Clothe Me" — now a signature Dominican composition.

Barry University President Sr. Linda Bevilacqua, who served on the Adrian Dominican General Council with Sister Nadine when she was prioress, was a sophomore at Barry when Sister Nadine started her college teaching career after earning a doctorate in philosophy. A bond grew between them. "She was the one I sought out in my senior year when I felt called to religious life," Linda said.

A gifted seamstress, Nadine sewed Linda's postulant slips in preparation for her entrance. Nadine's sister Yvonne met Linda at the Detroit airport, hosted her overnight, and drove her to Adrian. When Linda arrived, an Adrian Dominican sister was there to greet her at Nadine's behest.

For the first six weeks, postulants only got mail on Sundays. "Every Sunday, there was a letter from my father, written on behalf of the family, and a letter from Nadine," Sister Linda said.

At the end of the six weeks, Nadine wrote to Linda about God and her new vocation: "He must increase and I must decrease."

"I am who I am because of my parents' love," Sister Linda says. "But I am an Adrian Dominican because of Nadine Foley."

Sister Nadine's death took place on Mother's Day weekend. It evoked a poignant memory from the daughter of a friend of Nadine's who wrote: "Nadine was such a rock for our family, such a vital touchstone, and the fact that it's Mother's Day today makes us all feel the loss intimately entwined with our parents. ... I will never, ever forget Nadine taking my mother in her strong arms and singing Hail Mary to her as she lay dying."

We ask for your strength —
to renew the ancient truths,
to honor God's design,
to govern all things well.

Religious life was not something to which Nadine Foley aspired as a child or young woman. Thanks to a scholarship and the financial support of a family friend and benefactor, she was able to go to college, attending Siena Heights College in Adrian during the war years.

One day in her sophomore or junior year, Nadine's religion teacher (and later sponsor), Sr. Patrick Jerome Mullins, asked Nadine to accompany her to the Adrian Dominican motherhouse. She ushered Nadine into a parlor across from the office of Mother Gerald Barry, prioress of the congregation. "And then left me," Nadine writes in her autobiography. "After a while, Mother Gerald walked in, looked at me and said, 'I hear that you wish to enter the convent.' I was astounded. I looked at her and said, 'The idea appalls me.' She gave me a long look and then walked out. (Later, when I did enter, she said to me, 'What was that big word that you used with me one time?')" 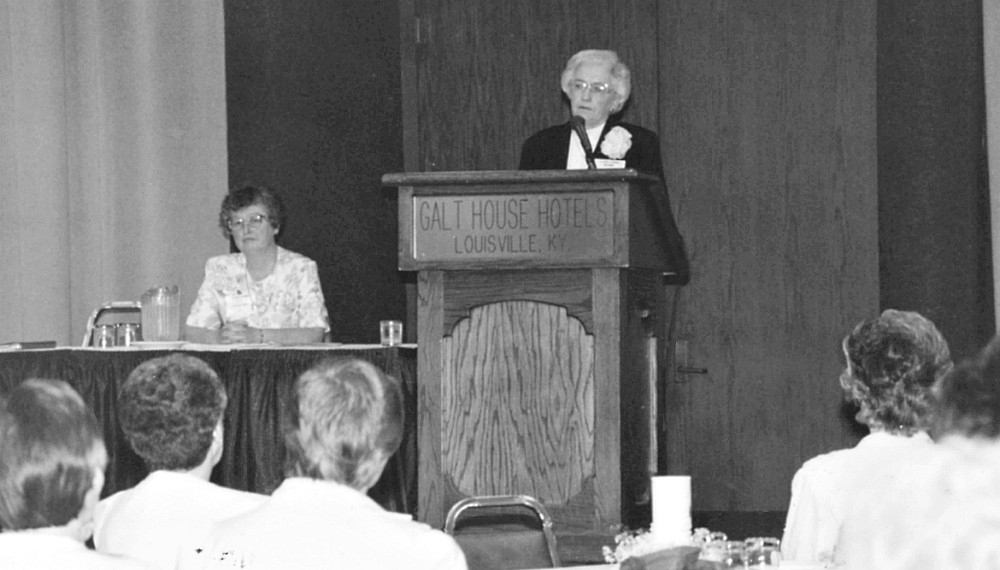 In faith and fidelity, Sr. Nadine Foley renewed the ancient truths, honored God's design, and governed all things well; she lived to fulfill the last lines of the prayer:

Help us, when the work is done,
to have been friends of God
and prophets.

International sisters play important and growing role in US communities