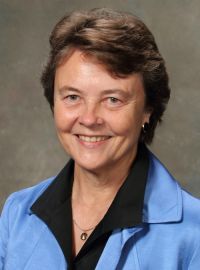 Dominican Sr. Elise D. García serves on the General Council of the Adrian Dominican Sisters and is president of the Leadership Conference of Women Religious (LCWR). She is the co-founder and former co-director of Santuario Sisterfarm, an ecospirituality center in the Texas Hill Country, and is on the board of the Earth Law Center. Follow her on Twitter: @elisegarciaop.

Appreciation - Friends and colleagues illuminate the character of Adrian Dominican Sr. Nadine Foley, who died May 13. A formidable figure of late-20th-century religious life, she renewed the ancient truths, honored God's design, and governed all things well.

COP21 Paris - As the penultimate day of the Paris climate summit drew to a close Friday, Dec. 11, chants could be heard from one of the forum areas in the center of the public Climate Generations space adjacent to the official COP21 site: "Black Lives Matter!" "One-point-five to stay alive!" "Keep the oil in the soil!"

COP21 Paris - For most people climate change is a scientific abstraction posing a distant threat. "It's in the Arctic or distant in time," said Dan Price, an English climate scientist in his 20s, speaking in the "green" Climate Generations area adjacent to the official "blue" area where the COP21 climate negotiations are taking place.

COP21 Paris - As the second day of the International Tribunal on the Rights of Nature opened in the packed auditorium of Maison des Métallos, a cultural center in the heart of Paris, a disturbing word was shared about the COP21 negotiations taking place just north of the city.

'Hear us' - Demonstrations are integral part of Paris climate talks

Indigenous peoples work to save land from extinction