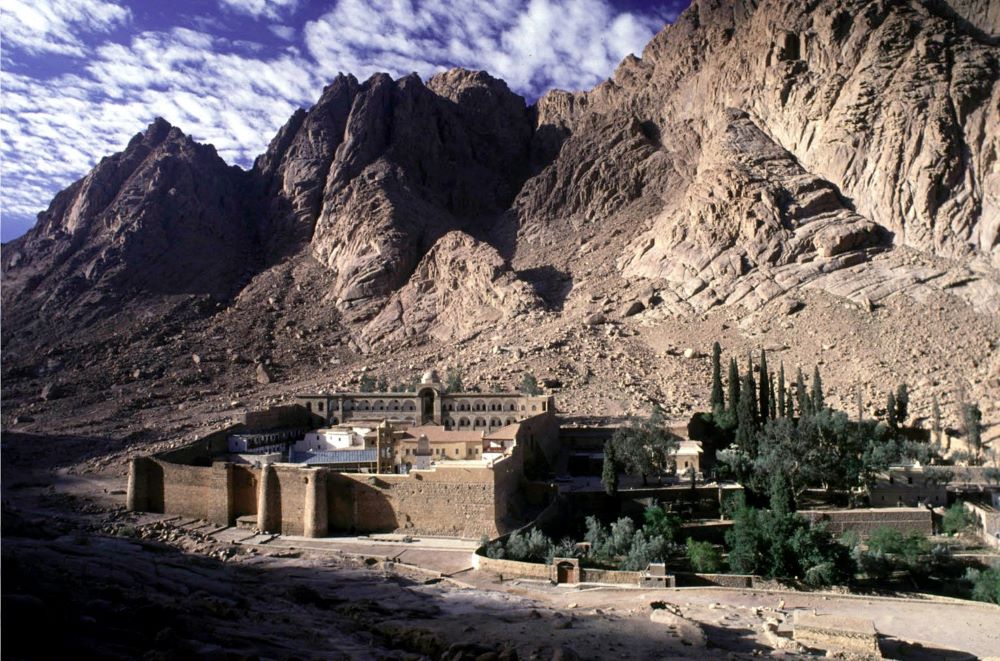 The Monastery of St. Catherine, shown in this 2000 photo, is nestled in a foothill of Mount Sinai where Moses received the Ten Commandments. (CNS/Patrick Godeau)

When I heard that the United Nations climate conference, COP27, was taking place this year on the Sinai Peninsula, my heart and mind immediately traveled back to a church pilgrimage my family and I took to Mount Sinai in November 1966. We were living in Egypt at the time. A caravan of about 20 cars and vans drove two days northeast from Cairo across the Suez Canal and then south along the Red Sea through the desert wilderness of the Sinai Peninsula. We stopped numerous times to push vehicles stuck in the sand, urgently trying to arrive at our destination, St. Catherine Monastery, before the gates closed to visitors at nightfall.

We made it just in time, relieved to have the doors of the tall granite-walled enclosure opened by one of the Eastern Orthodox monks, welcoming us into the world's longest continuously operating Christian monastery. An oasis of green treated our eyes in the monastic compound, resting in the shadow of Mount Sinai, in stark contrast to the desolate wilderness through which we had driven. We ate a simple dinner in the refectory and then went to separate dormitories, for women and for men, for the night. Rising early the next morning, we were greeted by a caravan of colorfully bedecked camels and their Bedouin drivers waiting to transport us as far up Mount Sinai as one could go on a camel, walking the rest of the way up stone steps constructed centuries ago by monks as an act of penitence.

The view from the top was spectacular — a wilderness of desert and rock mountains stretching in all directions, except for the startling speck of green marking the monastery far below. I was hardly what anyone would call a pious child, but to this day I recall feeling in the depths of my teenage soul a sense of being on holy ground, breathing in holy air, experiencing the fiery flame of life that burns but does not consume.

These images flooded my mind when I learned that COP27 would be meeting Nov. 6-18 just 50 miles south of Mount Sinai, by the Red Sea in in the resort town Sharm el-Sheikh. Could the power of the religious significance of this holy site of divine revelation to Jews, Christians and Muslims be a game changer for these climate talks? Could the call Moses heard on that land more than 3,000 years ago to remove the sandals from his feet "for the place where you stand is holy ground" (Exodus 3:5) be heard by all of us today as a call to recognize our whole Earth home as holy ground?

Like the Israelites of old, our human community today is lost in the wilderness — in desperate need of divine revelation to set us on a lifesaving course for God's people and planet. The window of time to prevent catastrophic climate change is rapidly closing. COP27 is being described as an "implementation conference," referring to the critical need for the delegates of nearly 200 party nations to agree to concrete steps that will change the disastrous course we are still tracking.

Nations not only need to make deeper commitments to greenhouse gas reduction but also to quickly implement them to ensure global warming is kept to no more than 1.5 degrees Celsius as promised in the 2015 Paris Agreement and reinforced in last year’s COP26 Glasgow Pact. Wealthier nations need to double — and actually pay — the money they committed to help developing nations transition from fossil fuels to renewable energy. And fossil fuel burning countries that hold primary responsibility for global warming need to create a loss and damage fund to compensate developing nations that contributed least to climate change but are suffering its already severe and costly impacts through rising sea levels, multiyear droughts and catastrophic flooding.

All these promises need to be implemented and made real if they are to make a difference —and not just "blah, blah, blah," as young climate activist Greta Thunberg said last year.

Like the Israelites of old, our human community today is lost in the wilderness — in desperate need of divine revelation to set us on a lifesaving course for God's people and planet.

The U.N.-based Justice Coalition of Religious, the Dominican Leadership Conference, and the International Union of Superiors General, or UISG, have joined in calling for a digital pilgrimage to COP27 called Shoeless on Sinai. They are inviting us "to pray in solidarity with the whole Earth community and, in a special way, with the Catholic sisters, brothers, priests, and other faith leaders who will be advocating for environmental justice in the UN proceedings on the Sinai Peninsula." Their website includes links to webinars leading up to COP27, a calendar of daily reflections from the Dominican family, a JCOR Guide to COP27 and a litany of Shoeless on Sinai prayers, calling on us to remove our shoes of ignorance, apathy, greed, and individualism — and to recognize we "stand on holy ground."

The UISG on Nov. 3 issued a powerful statement on behalf of more than 600,000 Catholic Sisters worldwide of the need for an integral global approach that cares for God's most vulnerable people and addresses both climate change and biodiversity loss.

UNANIMA International is one of the U.N.-based groups of Catholic sisters attending the COP27 talks. It will co-sponsor a "Catholics at COP27" event on Nov. 17 with Carmelite NGO, VIVAT International and the Medical Mission Sisters. A nongovernmental organization comprised of 22 communities of women religious and friends serving in more than 85 countries with 25,000 members, UNANIMA issued a statement highlighting their 20-year focus on women, children and girls, asking:

How will we house and accommodate those fleeing climate-related disasters and phenomena? When and how will the wealthier nations of the Global North step up to decrease emissions that are having disproportionate effects on the Global South or Global Majority countries? … How many lives and lands need to be lost before the topics discussed at COP will actually lead to implementation?

The small window to prevent catastrophic climate change is rapidly closing. Today millions of people in the Global South — largely people of color — are already suffering enormous loss and damage from the impact of the current rise in global warming of 1.1 degrees Celsius. The COP27 talks in Egypt — on one of the continents most impacted by climate chaos, in a political state where activism is brutally repressed, on holy ground where a lost people were guided by divine revelation — are now underway with all the combustion that could lead to abysmal failure, and all the Mystery that could unexpectedly shift everything.

The fate of our Earth home hangs in the balance. Let us remove our shoes and join them in prayer. We are all standing on holy ground.