This article appears in the COP21 Paris feature series. View the full series. 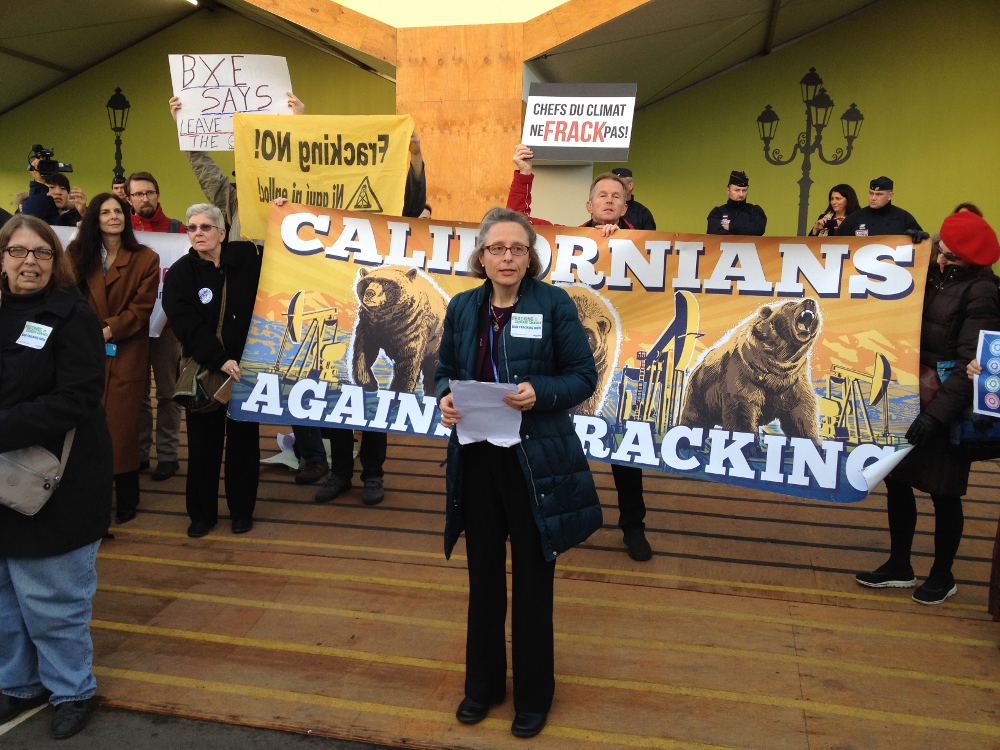 Le Bourget, France — As the penultimate day of the Paris climate summit drew to a close Friday, Dec. 11, chants could be heard from one of the forum areas in the center of the public Climate Generations space adjacent to the official COP21 site: "Black Lives Matter!" "One-point-five to stay alive!" "Keep the oil in the soil!"

Dozens of African-Americans from a number of organizations, including the NAACP and the Pan African Climate Justice Alliance, and students and faculty from historically black colleges and universities were in Paris calling for climate and environmental justice. The group was led in chant by Sarra Tekola, a 21-year-old environmental sciences graduate of the University of Washington who said they were there in solidarity with the people of the "global south" and other frontline communities suffering the climate effects of racism and colonialism.

"Sixty-eight percent of African-Americans live near coal-powered plants," Tekola said. "We're calling for reparations to the 'global south,' for no more than 1.5 [degrees Celsius increase in global warming] to stay alive, and disinvestment to keep the oil in the soil."

Tekola is part of It Takes Roots to Weather the Storm, an intergenerational delegation of more than 100 U.S. and Canadian youth and veteran leaders of grass-roots and indigenous community organizations working for economic, racial, gender and climate justice. It Takes Roots is an example of the growing "intersectional" movement uniting grass-roots organizations across peace, social justice, civil/human rights, gender, indigenous, and environmental issues. Its focus is on community-based and community-led solutions to addressing climate change.

At an earlier discussion on zero-waste solutions, Ahmina Maxey, who is the U.S./Canada campaigns and membership coordinator with the Global Alliance for Incinerator Alternatives (GAIA), joined panelists from Argentina, Italy and China to share community-based approaches to addressing climate change focused on reducing — and ultimately eliminating — garbage disposal.

"I have asthma. My niece has asthma. There aren't many people in Detroit that don't have asthma," Maxey said. "It has nothing to do with our lifestyle, but a history of environmental racism."

The largest trash incinerator in the United States is located in the 48201 ZIP code of Detroit*, which is 70 percent African-American, Maxey said. Describing the multiple justice issues involved with the incinerator — including its health impacts and its implication in Detroit's bankruptcy — Maxey noted that incinerators spew more carbon dioxide into the atmosphere per unit of energy than coal-fired power plants.

The tack taken by the Zero Waste Detroit coalition of justice and environmental groups to shutting down the incinerator has been to "starve the beast," Maxey said. Their focus is on recycling as much as possible. 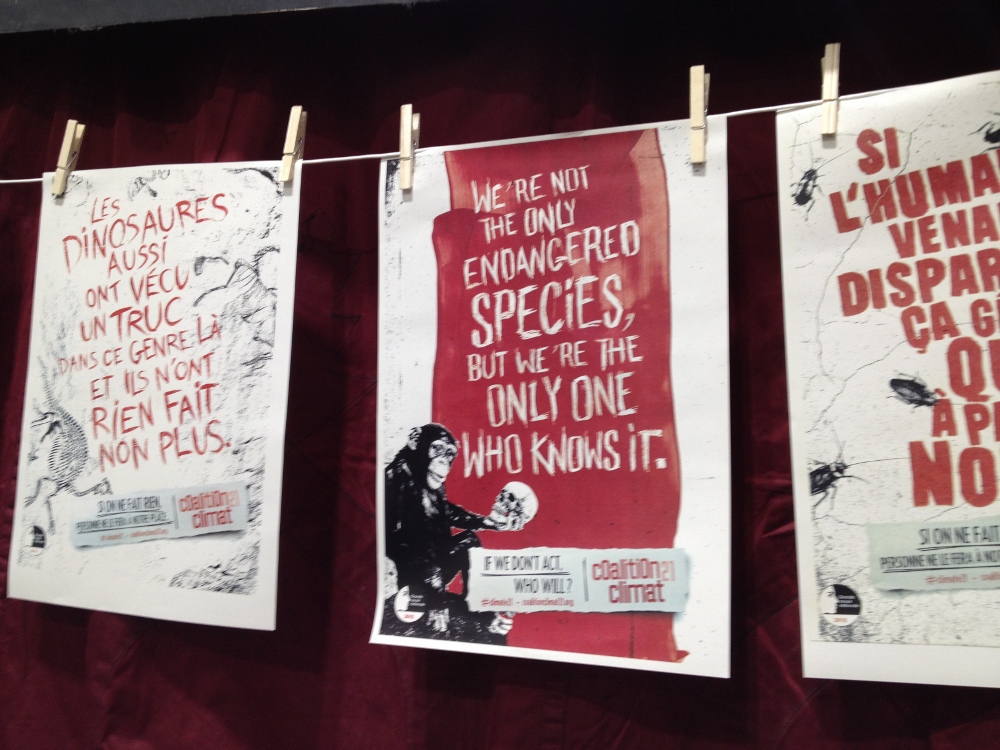 "We're just at the beginning of a zero-waste plan, and it's been a fight to get here because city leaders were politically aligned with incineration," she said. But over the past seven years, as a result of their persistent efforts, Detroit now has a citywide recycling program, and their relationship with city leaders has changed, she said. City councilors recently attended a meeting with San Francisco officials to discuss municipal recycling, Maxey said. "There has been a major shift in their attitudes as a result of the work of residents."

Bill McKibben, author and founder of the 350.org climate campaign, echoed the sentiment, saying, "Grass-roots activists have been winning battles around the world."

His remarks came at the opening of a COP21 panel discussion on the international movement to ban fracking, which three congregations of women religious — Franciscans International, Medical Mission Sisters, and Mercy International — co-sponsored.

Mercy Sr. Áine O'Conner, coordinator of Mercy Global Action at the United Nations, was in the audience for the fracking panel and later was a speaker at a demonstration for a ban on fracking. She said the Sisters of Mercy have made an international ban on fracking a big priority.

"It comes from our experience on the ground in Australia, Argentina, Ireland, Newfoundland, and the U.S., where sisters were raising concerns around the people's right to food, to water, and to a climate that is sustainable," she said.

In advance of the Paris talks, Mercy International joined 1,200 organizations in signing a letter calling on COP21 climate leaders to ban fracking.

"Climate leaders cannot deliver climate action that allows fracking because of the human rights violations attached to fracking," O'Conner said. The links are detailed in a 74-page "Guide to Rights-Based Advocacy: International Human Rights Law and Fracking" they published in June.

The right to a safe environment for her children led author and biologist Sandra Steingraber to become involved in the movement in 2009.

"I was invited to give a talk on fracking," she explained during the panel discussion. "I was bewildered by the invitation because I don't do energy."

It turned out the host wanted her to talk about the chemicals used in fracking, so she began researching the process of drilling for oil using hydraulic fracturing.

"I knew the chemicals very well. These were very toxic chemicals, highly controlled in other settings, that can simply be poured down into the ground — so far into the ground that it reaches water, then used as a club to shatter the bedrock in an uncontrolled way," she said. "And all that sloshing liquid was going to come back up."

"I couldn't believe that was possible," Steingraber continued. "That began my interest. After that, I became interested as a mother. I have two children, one with asthma. I felt it was my job as a mother, not just as an activist."

When she, Wenonah Hauter of Food & Water Watch, and others started to organize against the fracking, Steingraber said, they were told resistance was futile.

"We began New Yorkers Against Fracking with four or five groups. By the time we won [a fracking ban in New York], we were 400 groups," she said. "It was a David and Goliath fight to end fracking. And we won."

During the day, there was a buzz about the initiative of a so-called "high-ambition coalition" of 100 or more nations that had been announced late the previous day. It held the promise that key elements supported by faith-based and civil society groups, such as a limit of no more than a 1.5-degree Celsius increase in warming and financial support for developing countries, might make it into the final agreement.

But no one was waiting with bated breath.

Outside the Le Bourget train station, where hundreds were heading back to Paris as night fell, fliers were handed out announcing a mass "peaceful and determined" rally at 2 p.m. Dec. 12 in front of the Eiffel Tower.

Thousands of people will gather to call for climate and social justice — "under a state of climate emergency."

Q & A with Sr. Kathleen Mary Kiemen, supporting the rural community and sustainability