Deepening the idea of hospitality in New York: Franciscan house is like a mini-UN 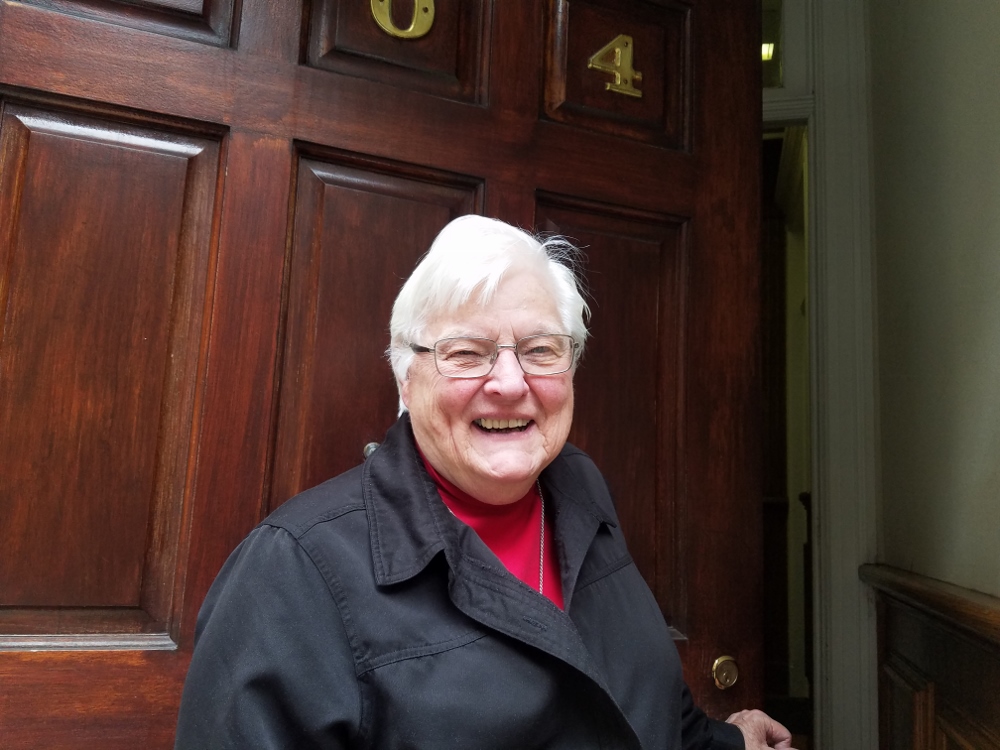 Sr. Mary Petrosky of the Franciscan Missionaries of Mary smiles outside the door of the Holy Name of Jesus Convent in Upper Manhattan. (GSR photo / Chris Herlinger)

New York, N.Y. — Every day, hundreds of people walk up and down the Upper Manhattan block of 97th Street just off of Broadway and pass an inconspicuous brown door.

They probably never give it a thought or care.

But to knock on that door and be greeted by Sr. Mary Petrosky of the Franciscan Missionaries of Mary is to enter a warm, welcoming and comfortable space, one that merges the spirit of a convent with a kind of mini-United Nations.

That is by design, said Petrosky, whose enthusiasm, humor and kindness are infectious and have made the Holy Name of Jesus Convent a welcome way station for visiting sisters and others on work assignments in New York, particularly those representing their congregations at the United Nations.

"I must say, there is joy here," said Petrosky, 85, who coordinates the house's activities, including housing, meals and nightly vespers at the house's small chapel. (The Church of the Holy Name of Jesus is around the block, and the convent is next to a parish-run community center.) Petrosky also leads private spiritual direction sessions.

The Franciscans bought the five-story convent in 1993 from the Archdiocese of New York for use by the Franciscans; currently, six Franciscan sisters live there. But with the smaller numbers of sisters within the congregation overall, the Franciscan Missionaries of Mary opted six years ago to welcome others as guests.

These include laypeople engaged in peace and justice work; relatives of the sisters; and, the largest group, women religious of other congregations visiting or working in New York.

Some, like Sr. Colleen Jackson of Melbourne, Australia, have temporary assignments in the city. Jackson is a recent guest representing her congregation, the Sisters of Charity of Australia, and interning at UNANIMA International, a United Nations-based coalition of Catholic congregations focused on concerns of women and children.

The house "has been a place to share life journeys, stories and experiences of the U.N., the important grassroots work of NGOs brought alive to the U.N., and not least of all, humor and passion," Jackson said.

The convent has 18 bedrooms, and all but one is now occupied. "It's rare when it is not filled," Petrosky said, particularly in the fall, winter and spring months, when U.N. conferences are popular. "It's like a school year, in a way." 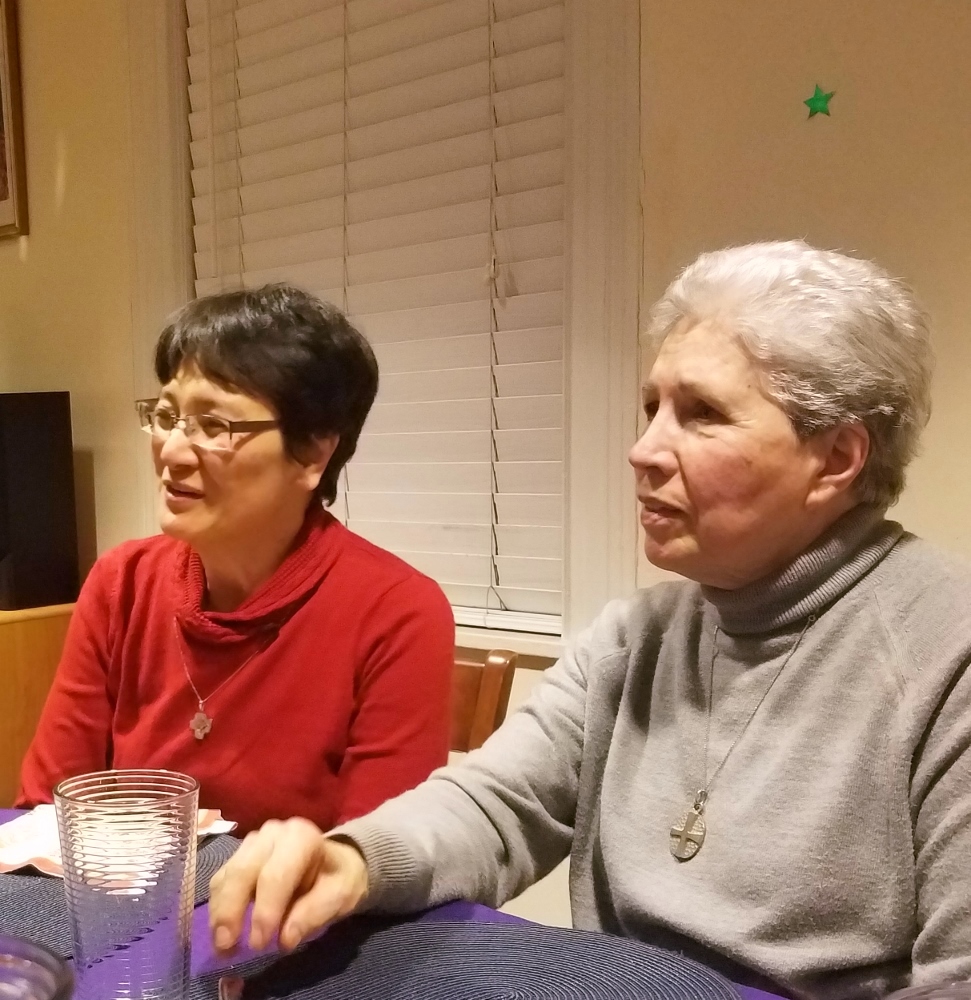 Sr. Jocelyn Quijano of the Philippines, left, and Sr. Maria-Teresa de Los Rios of Spain have a conversation at a recent evening meal at the Holy Name of Jesus Convent in Upper Manhattan. (GSR photo / Chris Herlinger)

A small donation for staying at the convent "is always welcome," Petrosky said, and includes meals — three meals a day for those like Jackson interning at agencies, and breakfast and dinner for others.

The evening meals are often cooked by the guests, lending an international flavor to the atmosphere. On a recent evening, spaghetti, tomato sauce, meatballs and sausage were the main course, accompanied by salad and wine and capped by brownies and coffee.

The talk at the table — with sisters gathered from France, Spain, Vietnam, South Korea, the Philippines, Australia and the United States — was rich, expansive and often funny, covering news of the day, goings-on at the United Nations, church politics, movies and opera. (A benefactor provides tickets for sisters to see rehearsals of the Metropolitan Opera, four subway stops away.)

The older sisters also reminisced about their stages of dress — from the formality of pre-Vatican II days to the more informal attire of today.

Franciscan Sr. Maria-Teresa de Los Rios of Spain recalls wearing her formal habit in the 1960s as she and other sisters took the subway from Fordham University in the Bronx back to Manhattan. A little girl noticed the sisters and told her mother, "Look, Mommy, they talk!"

Petrosky, who has been at the house since 2003 and whose mission experience includes stints in Australia, Papua New Guinea and rural Georgia, said the international flavor of the house is not a surprise given New York's reputation as an "international crossroads."

But the nature of the Franciscans' work and charism are also factors. The congregation's foundress, Mary of the Passion, born Hélène de Chappotin in France, founded the Franciscan Missionaries of Mary in 1877.

By the time she died in 1904, the congregation had more than 80 houses internationally, making it natural to develop a tradition of sisters of different nationalities working together.

"This internationality soon became a distinguishing characteristic of the Franciscan Missionaries of Mary," the congregation's U.S. province notes on its website, adding that this tradition continues with the sisters living out "this intention of their foundress through their readiness to live in international/intercultural communities, and commit themselves to live an attitude of openness to the whole world."

"It's wonderful to widen your mind, your heart and your soul," Petrosky said, adding that the idea of hospitality is enriching and broadens "understanding of the world, life and God." 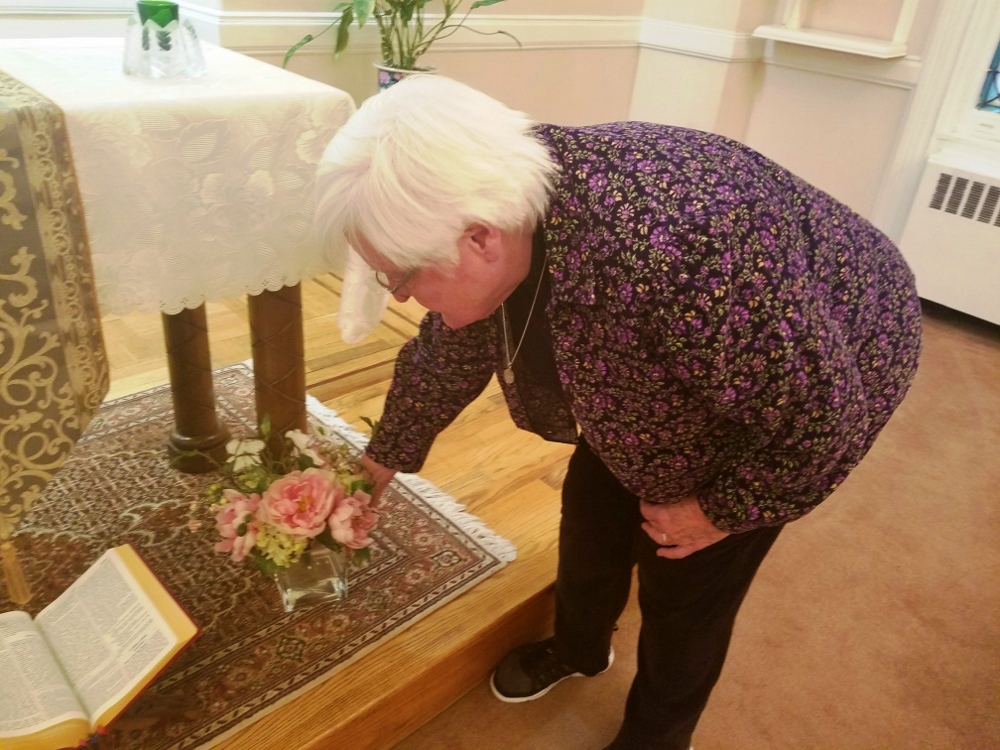 "It's such a privilege to have people here," she said. "We are deepening the idea of hospitality in the city." Noting that while New York can be "draining and tiring," Petrosky also believes it is also a place of beauty, and that the house offers the gift of peace but also companionship and community. "There's always someone to talk to," she said.

Franciscan Sr. Odile Coirier from France said life at the convent helps overcome "our narrowness of cultural boundaries" and "calls us to see beyond ourselves, to widen the space of our own tent, experiencing joy of sharing, belonging to one family."

The notion of hospitality is something Petrosky believes needs to be expanded and embraced, particularly in a time when political forces are making the idea more challenging.

"If we were all more hospitable, if we really welcomed the stranger, we'd have a different view of the needs of refugees today."

Certainly, the sisters who are guests at the house feel that embrace.

"As a newcomer to New York and the U.N., the Franciscan hospitality house has
provided a home away from home," Jackson said. "From day one, the welcome has been warm and generous — a multicultural, multi-gifted powerhouse of women who are generous, gifted, fun, 'faith-full.' "

Sr. Jocelyn Quijano of the Philippines, a member of the Union of Sisters of the Presentation of the Blessed Virgin Mary who is now on assignment as congregational representative at the U.N., affirms that international character.

"It is a microcosm of the global community — one that can live together, rejoicing in the commonalities as well as the differences even as we struggle with the same," she said. "As a Presentation Sister, it is what I'd call 'being in communion,' seeing God in the interconnectedness of all — people, self, and the whole of creation."

Ministry | Deepening the idea of hospitality in New York: Franciscan house is like a mini-UN