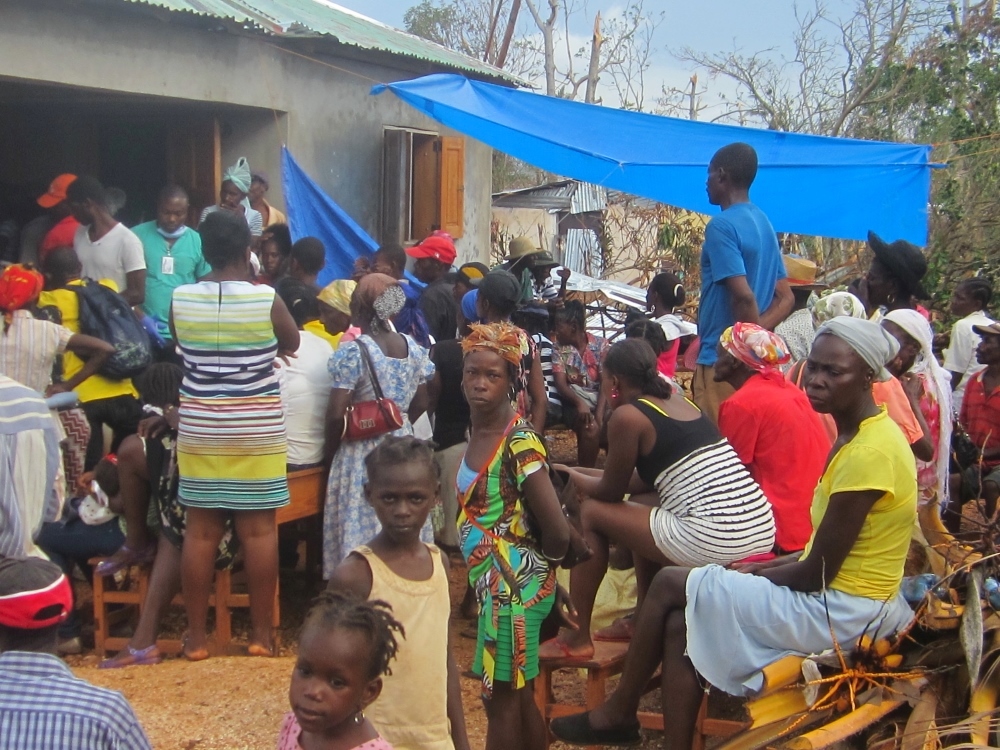 When Sr. Fidelis Rubbo arrived in Pestel, Haiti, late on the night of October 14, she knew not to expect the simple but welcome comforts of the place where she had worked from 2001 to 2014 as a missionary.

But when this member of the Sisters of St. Francis of Sylvania, Ohio, awoke the next morning and stood on the back porch of St. Joseph's Church — a place where Rubbo had once enjoyed quiet moments in the morning, reflecting and praying, or late in the afternoon, joyously recounting the day's events with friends — she was stunned.

"I had seen this view so many times, but now the trees were gone, and you could see clear to the mountains," an emotional Rubbo said last week about the toll that Hurricane Matthew has taken on southwest Haiti since it hit the country October 4. "So much was gone."

"So much was gone." This has become a common refrain for those like Rubbo, a member of a visiting medical mission team, who have deep ties to Haiti. Not only are Rubbo and others assisting directly, they are also trying to get the word out, urgently, that the needs in Haiti remain grave four weeks after the hurricane bore down on southwest Haiti, killing hundreds. (Estimates of the death toll have ranged from the mid-hundreds to more than 1,000.)

"They are in such a dire situation. We're going to have massive deaths if we don't get in there and get in fast," Rubbo said. 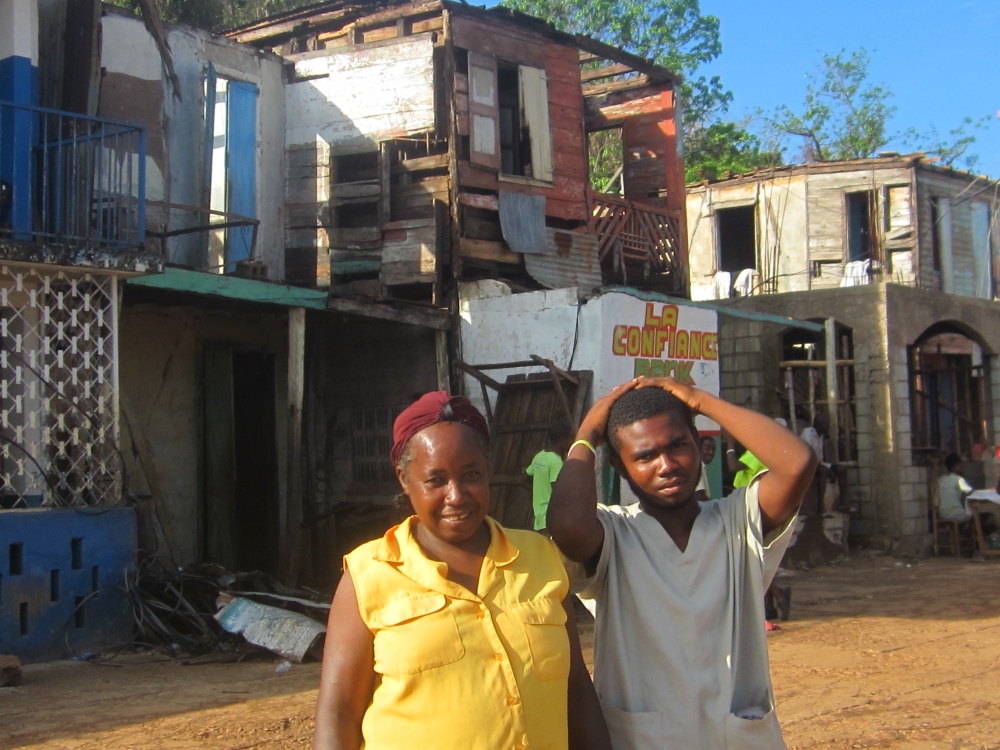 A woman, left, who is sharing her damaged home, pictured above her head, with the young man, who had none. (Courtesy of Sr. Fidelis Rubbo)

A communication from the Missionary Sisters of the Immaculate Heart of Mary, or ICM Sisters, a congregation that works in Haiti, summed up the humanitarian situation this way: Hurricane Matthew wiped out "entire villages, taking lives, destroying houses and buildings, schools and hospitals and churches. Fruit trees, livestock, banana plantations, vegetable gardens, roads and bridges, means of communications — all are destroyed. Water sources are polluted. Food has become very scarce. Cholera has become an epidemic."

The communication added: "People are in temporary shelters, children are not in school, and the sick have no recourse at all. Aid is trickling in from many generous donors but these emergency steps will not last long."

What is feared in the coming months, as people try to "rebuild lives in a sustainable way," is possible "famine and sickness, malnutrition, joblessness and increase of insecurity as people try to survive by any means," the sisters said.

Findings from the government of Haiti, the World Food Program (WFP), and other U.N. agencies confirm the dire situation. In an October 24 statement, the WFP said 1.4 million Haitians "require food assistance in the wake of Hurricane Matthew, which wrought widespread devastation on supplies and crops across large swaths of the island nation." An emergency field assessment determined that more than half of those affected — approximately 800,000 — "are in dire need of immediate food aid."

Hurricanes can be catastrophic, but especially so in areas where infrastructure — roads, housing, electricity — are already in poor shape and where poverty is endemic. Haiti ranks third among vulnerable countries most affected by extreme weather, according to the Climate Risk Index, and its poverty rates make it a particularly at-risk place when natural disasters strike. 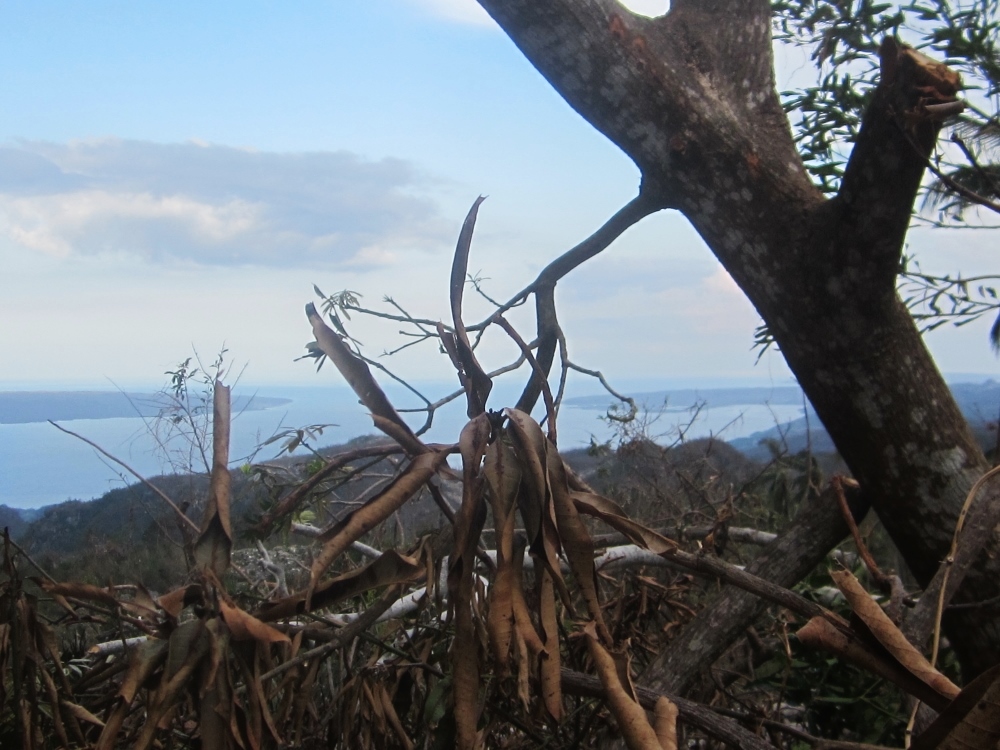 A view of the coastline is clear following Hurricane Matthew. (Courtesy of Sr. Fidelis Rubbo)

As the WFP notes, nearly six out of 10 Haitians live in poverty, and nearly a quarter of the population lives in extreme poverty. And when it comes to food, more than half of Haitians are undernourished, according to The State of Food Insecurity in the World 2015 report, authored by the WFP and other U.N. agencies.

Put a hurricane on an already-difficult situation, and you have the recipe for a major disaster, as Sr. Valorie Lordi, a nurse and a member of the Dominican Sisters of Sparkill, New York, told GSR. A longtime summer volunteer in Haiti, Lordi said her contacts in Haiti are painting a grim picture.

"There is absolute desperation in Haiti ... [the people] are crying out for help," said Lordi, who hears daily from the congregation's partners in mission. Getting much-needed supplies in affected areas is proving difficult because roads are washed out in many of the more remote areas, she said.

"The people I'm in touch with aren't getting any help from the government, and they are desperate," Lordi said. "The Red Cross cannot get through to the remote areas, and people are in great need of food and clean water. Cholera and dysentery are running rampant now, which can lead to malaria. The area we are connected to is in a state of complete chaos."

In Pestel and surrounding areas, including isolated mountain communities, residents are now dependent on the work of the few teams that have been able to get to the affected areas. Rubbo, who speaks Haitian Creole, acted as translator and liaison for an 11-member medical team that traveled to Haiti October 13-20 and was headed by Dr. Richard Paat, a Maumee, Ohio-based physician who has led more than 60 medical missions, including 10 to Haiti since the 2010 earthquake. 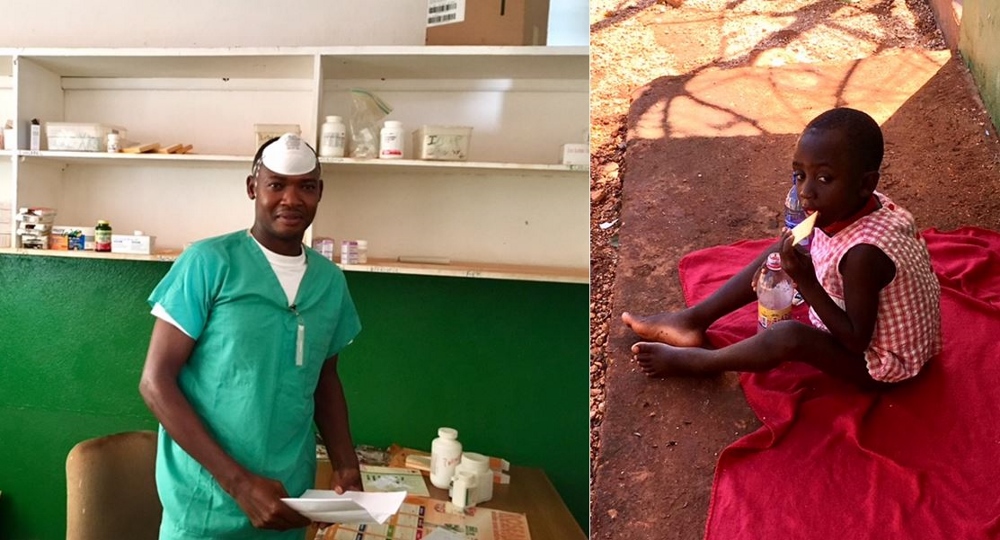 In an interview with GSR, Rubbo spoke of long days and nights in which the medical team treated 1,060 patients during five days of clinics. Among the various ailments: pneumonia and injuries caused by flying tin roofs and wood. Cholera also remains a constant concern and threat.

"People are just getting worn out," she said.

One theme emerged: People are hungry and need food. Some food has gotten into affected areas, including from the humanitarian organization Food for the Poor, which has partner relationships with a number of sisters' congregations throughout Haiti.

But there are a host of problems and challenges in the isolated and mountainous southwest region. One concern is Guy Philippe, a prominent political figure running for the Haitian Senate, whom a recent New York Times article called a "warlord" and "outlaw commander" and who is wanted by the United States Drug Enforcement Administration for alleged drug trafficking.

Among the other charges against Philippe: He has killed police officers and had a role in a coup that ousted President Jean-Bertrand Aristide in 2004. (Jocelerme Privert, Haiti's current interim president, served as Aristide's interior minister. Aristide is a former Salesian priest.)

Philippe surmised to the Times that aid might not be getting to the region because of his prominence in the affected region.

"They are punishing the people because of me," Philippe said, adding that he would be willing to leave the area if would make humanitarian aid workers feel more secure. "If it will help, I will go to jail so that people can eat here," he told the Times. "Or I will leave for however long it takes."

Rubbo said she would not be surprised if some aid groups are afraid to come in because of Philippe. But Rubbo said she and others have been able to work in the area in the past without interference from Philippe or his supporters.

Privately, humanitarian aid workers acknowledge that the labyrinth of Haiti's politics can make humanitarian assistance a challenge. But James Beighle, head of programs for Catholic Relief Services (CRS) in Haiti, told GSR that CRS has not been distributing assistance in Pestel not because of "any issues with Guy Philippe, but rather due to our lack of capacity and lack of recent programming [reach] there." 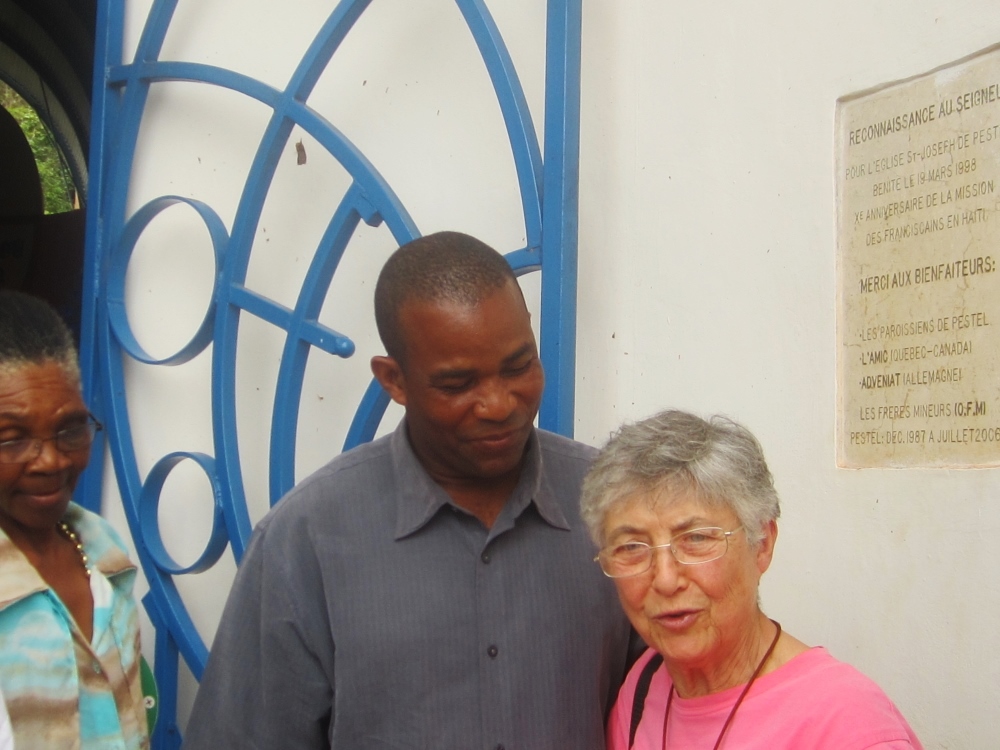 He added: "It is also quite far, and we do not yet have warehousing in Jeremie." Jeremie is a regional hub also affected by the hurricane.

For now, Rubbo is less concerned with Philippe than she is about restarting and rebuilding some of the mission projects she and other sisters worked on through the years.

"Our buildings were not severely damaged because they were built of cement blog. These fared well in the area. We do intend to continue these ministries," she wrote in an email to GSR. "However, it is simple block homes for the people that I am concerned about building. I'd say that 70 percent of the people I know are homeless, living in a little tin hut made from scraps or living with others."

Rubbo said she is proud of the work she and other sisters, including members of the Philadelphia-based St. Francis of Aston, have performed through the years and done in partnership with Catholic and non-Catholic groups. This includes building cisterns and bringing in water filters; starting a sewing school; building and running a guest house; sponsoring various agriculture projects that included planting beans, peanuts and trees; supporting a number of educational initiatives; and, the source of particular pride, building a much-needed health clinic.

Such small-scale work is common among dozens of congregations and with U.S. parishes that have partner relations with churches and other groups in Haiti. Rebuilding will require new efforts to raise money in the United States — and Rubbo is among those ready to do just that. 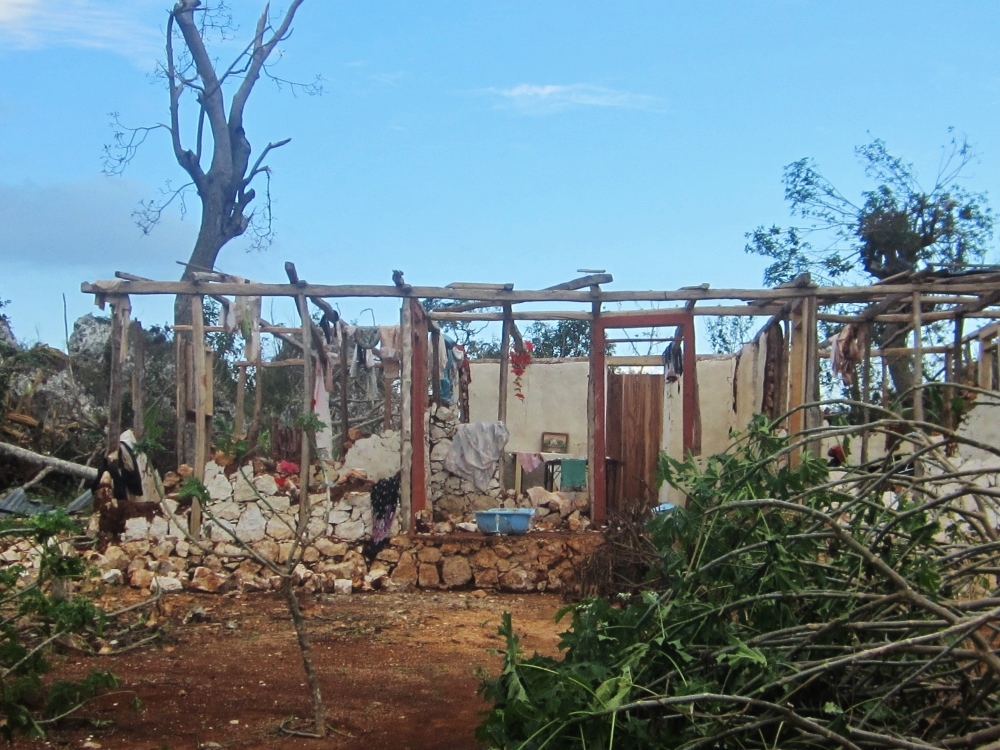 "I plan to fundraise and keep this going from this side," she said. "I'm fired up."

Sr. Lynn Casey is one of five Sisters of Charity of Leavenworth, Kansas, who were in Haiti just prior and during the hurricane. The sisters were in Haiti to join with the congregation's long-term partners, the Sisters of St. Anthony of Fondwa, to celebrate the St. Anthony sisters' 20th anniversary.

The Sisters of Charity had to leave Fondwa, located in a hilly area in southern Haiti, before the hurricane struck and waited out the storm in the capital, Port-au-Prince. The storm affected he capital city but nowhere near as severely as Haiti's southwest.

Casey told GSR she is convinced that Haitians can recover from this latest disaster, though she added, "It was not just a setback, but a very huge event for the country."

"The resilience of the people is extraordinary," she said. "The people are ready to get to work and do what needs to be done. They're very industrious and resilient."

Rubbo agreed. While in Haiti, she met a mother an infant who had taken shelter from the hurricane in an abandoned peanut butter factory that served as a makeshift clinic. During the hurricane, "the baby was ripped out of her arms by the wind and carried off," Rubbo said. "It was only two hours later that they found her on the ground unharmed."

"A little miracle baby, she is."

Yet amid such signs of hope and resilience, Rubbo said she was shaken by what she saw. "They are such good people — grateful to God, but right now they are scared. I'm afraid for them."

My challenges in carrying Jesus

How did I end up working in a funeral home?