Some 16 teenagers working in pairs smiled and giggled as they stretched out their arms in various directions to demonstrate geometric shapes. The fifth and sixth graders are students at the Franciscan sisters’ school for indigenous Aeta youth about 50 miles northwest of Manila.

In 1991, the Franciscan Sisters of the Immaculate Conception (SFIC) started adult literacy classes for communities of indigenous people (IP) in mountain villages of Subic town and now run a school for the younger generations.

The math exercise on Thursday was for students’ review of types of angles. Their teacher gave instructions, and pairs of students formed different types of angles with their hands and feet, taking turns posing for classmates who shouted out the name of the angle they were showing.

The group is one of St. Francis Learning Center’s multi-grade classes, said SFIC Sr. Junetta Jimenez, school directress. She told GSR certain grade levels have only 10 or fewer students, so they are grouped with the next grade level in one classroom and taught by one teacher.

Teamwork is used a lot in classes as well as in the rest of the community life of some 90 resident students in the boarding school in Subic town, which is on the northern coast of Subic Bay. Students come from 22 mountain villages in the area.

Founder and overall coordinator SFIC Sr. Mary Francis Borje explained part of the school’s approach is to build on the “good cultural practices and attitudes” of the Aeta people in the learning center, such as what is called the spirit of ‘bayanihan,’ or cooperative labor.

To build on this, students are assigned into groups of mixed ages every Monday to take care of chores in the compound of several acres. For example, some will do the cooking and kitchen duties, others clean up the dormitories, tend to the garden where some of their food is grown, do laundry or other tasks. Women are assigned as group leaders and males as assistant leaders.

The Aeta youth’s “strong sense of the spiritual and of God” also offers nuns and teachers a way to approach school and community living. At the Indigenous People’s (IP) cultural presentation on Thursday, older students led the group in “Dororo” prayer by chanting to God who they call “Apo Na Mallari.”

“Here, they can pray any way they want. We are the same in that we believe in God, but we call him by different names,” Borje said.

Aeta tribespeople also have strong extended family ties. Some, of the students fell under the care of aunts or uncles after parents left them. “Now the girls can study and some have become teachers. Parents see they don’t have to arrange dowry and marriage for them. They can earn another way,” said Borje who knows some women who were married off by their parents as early as nine years old.

Women married off to their husbands do most of the work, Borje noted. “One woman was very thrilled to tell me the story of a priest who we placed in their house for exposure. She couldn’t get over the priest helping her chop firewood,” the nun recalled.

Some younger children get lonely for their mothers, so the nuns encourage parents to visit their children at the boarding school, to spend a night or two with them.

Borje, who had worked four years as a missionary among Dayak tribespeople in Indonesia, was assigned to Subic in 1990, more than a decade after returning to the Philippines.

She was first sent to teach in the SFIC-run St. James high school, but after Mount Pinataubo erupted the following year, setting off catastrophic mud flows carried by typhoon rains, her congregation assigned her to coordinate emergency relief and rehabilitation of Aeta communities.

“We organized Aetas from Cawag, Alibang and PHILSECO [Philippine Shipyard and Engineering Co., now Keppel Subic Shipyard] areas,” Borje recalled. She said the late Aeta chieftain asked her to teach his people to read, write and count – instead of asking for food, livelihood or housing.

The Aeta leader shared with the nun his sad experience of being forced to thumb-mark a document that he could not read because he was illiterate and because it was in English. “It turned out to be a deed of sale for part of his people’s ancestral domain,” Borje said.

She taught classes in 1995 with 20 students from the three areas, including one mother. In two months of training under volunteer catechists, the students were reading and writing.

Informal education classes continued through 1997. “One of my frustrations was that the young ladies would drop out. Later, I learned about the Aeta’s practice of parents arranging their children’s marriage.”

Eventually, however, teachers did not have to go to parents to recruit students. They were coming to ask the sisters to accept their children in school. Borje said: “That was to me the sign we had to continue our non-formal education for Aeta youth. After the three-month course, another batch would arrive. Finally, our congregation’s St. Joseph’s College in Quezon City said it would subsidize us.”

In the 1997-1998 schoolyear, Borje’s SFIC superiors said the congregation would help because it is their charism “to help the poorest of the poor.” She got a government permit to operate as a formal school starting with the 1998-1999 schoolyear, and the school catered to even more Aeta communities.

The congregation bought land that was “partly donated” by a secular member of SFIC. The convent and juniorate were built.

Their mission was clear – to empower Aeta people so they would live as equals with the rest of the community.

“They are seen by other people as second class, and this has made them feel inferior and shy,” Borje said, citing stories of Aeta students dropping out of public schools because classmates laughed at ones who were placed in lower grades with young children.

“Our boarding school aims to help them preserve their culture. We continue with adult literacy and numeracy training for them in a holistic integrated social, economic, cultural, spiritual approach so that the good culture they have will be preserved along with their ways and attitudes.”

Most of the students follow their native beliefs, that there are spirits – good and bad – in people and nature, while some tribes have been Christianized by evangelical movements.

“Here, we respect their beliefs,” Borje said. “If they want to be Catholic we have to ask permission from their parents, and then there are a few who ask to be baptized, to become Catholic, because they want to receive Communion. That means they understand already our faith.”

"In 1991 and 1992, they did not want to be called Aeta. But when we started the adult literacy we had to discuss, ‘Who is Aeta?’ They said, ‘Is that not our identity, kinky hair and black color?’ It was a long process. Even here, during June, there are very shy newcomers,” Borje said.

Third-year high school student Angelo Gonzalez – known to friends as Banghol (dragonfly) – had studied in public school, but dropped out. When he saw his half brother doing well at St. Francis, he “felt inspired” to go back to school.

He told GSR, “I used to be ashamed to wear our ‘bahag’ [loincloth],” until an Aeta graduate who became his teacher taught class one day wearing the tribal attire. Now he too wears the Aeta attire proudly and hopes to be a teacher someday.

The desire to be a teacher goes with the desire to uplift the life of the tribe, Borje said. “They know very well the situation of not having a school.” Fourth-year student Elfa teaches the kids around her neighborhood when she goes home for the summer.

Borje said aside from the Franciscan Renewal Foundation, other supporters of their work are Filipino individuals and families and groups or corporations who give rice, pledge salaries for some of the teachers and help fund buildings. One Japanese tourist came and offered 2,000 pesos (U.S. $45) per year for each child’s schooling.

“When people come here, I say, ’Lord, I know you are sending them.’ They come here and they see our center. Some gave cement and hollow blocks so we can begin to build more classrooms for those who are now studying in the huts dirt floors,” Borje said.

“This is God’s work,” she said, “so I expect him to provide what we need.”

The dormitories were built with funding from former Philippine Ambassador to Germany Bienvenido Tan. The permanent building for the elementary school was funded by the Franciscan mission central in Germany. They also helped send students for carpentry training.

“I sent another graduate of adult literacy to Loren Fashion School so she can teach students in their own dialect,” Borje said.

The nun is working to get the education department to recognize her school for an Educational Service Contract this summer. That designation means that the government will pay students’ school expenses, even though they are in privately run schools.

It’s an essential piece because there are no public schools in Subic particularly for Aeta students. Aside from St. Francis in Subic, the nuns also run an annex school in the mountain community of Alibang, Laug Sur. Two teachers go there and teach very young students who are not ready to be separated from their parents.

“The problem here is between harvest times, the lean months, when parents go higher up the mountain looking for food – the children go with them,” Borje said. If she finds funds, she is contemplating giving rice to students so they will not have to miss school to gather food.

For the nun, who by profession is a teacher of general science, natural science and mathematics, her work at the center allows Aeta students “to feel how much God loves them.” She calls the sisters “instrument of God’s love.”

“People ask me, ‘Don’t you get tired?’ I tell them, ‘How can one get tired when she has in her heart that what she is doing is all for the love of God?’ We are being re-charged,” the nun said.

She has four simple rules for students: be vigilant in praying, diligent in studying, industrious with work, and earnest in building friendship and community.

Students join Sunday “formation” sessions, with two students from the lowland who were street children brought to the community for help.

Borje, 70, celebrated her 50th year in religious life on May 17. She graduated in April 1964 then entered the convent the following month.

“When I look back at my mission in Indonesia, I just went there to study how to work with the natives – and it’s like this. That’s where I got the idea. I remember Pope John Paul II, when he came to World Youth Day in Manila in 1995 and told pilgrims, ‘Just as the Father has sent me I am sending you.’ That was where I got the guts to ask my superior’s permission to experiment on the non-formal education program, and I based it on my Indonesia experience.”

She said even her coming to Subic just before the rampage of Pinatubo was more than coincidence. “The Lord knows many things I do not know,” she said.

[N.J. Viehland is a correspondent for NCR and GSR based in the Philippines.] 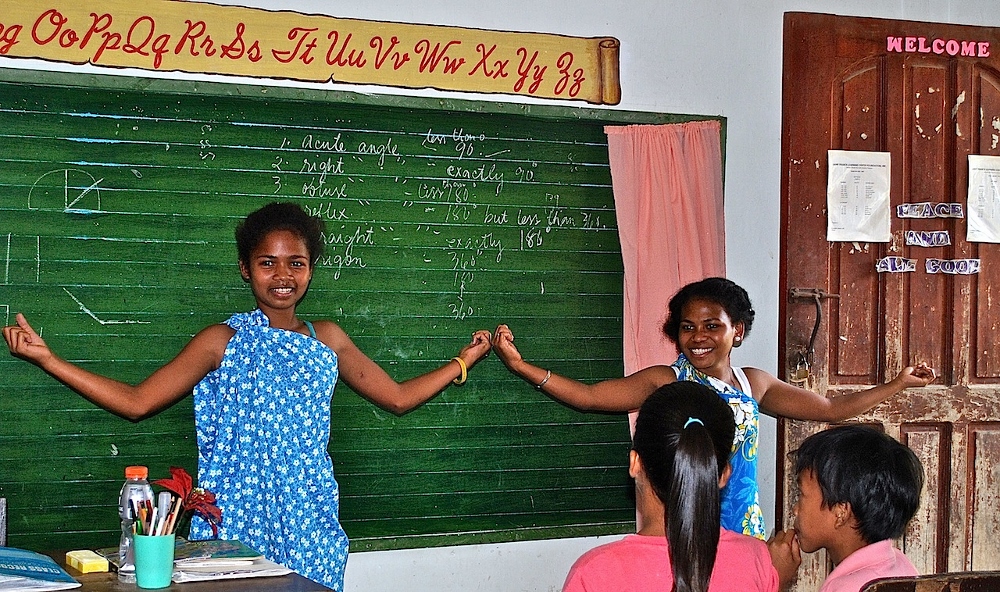 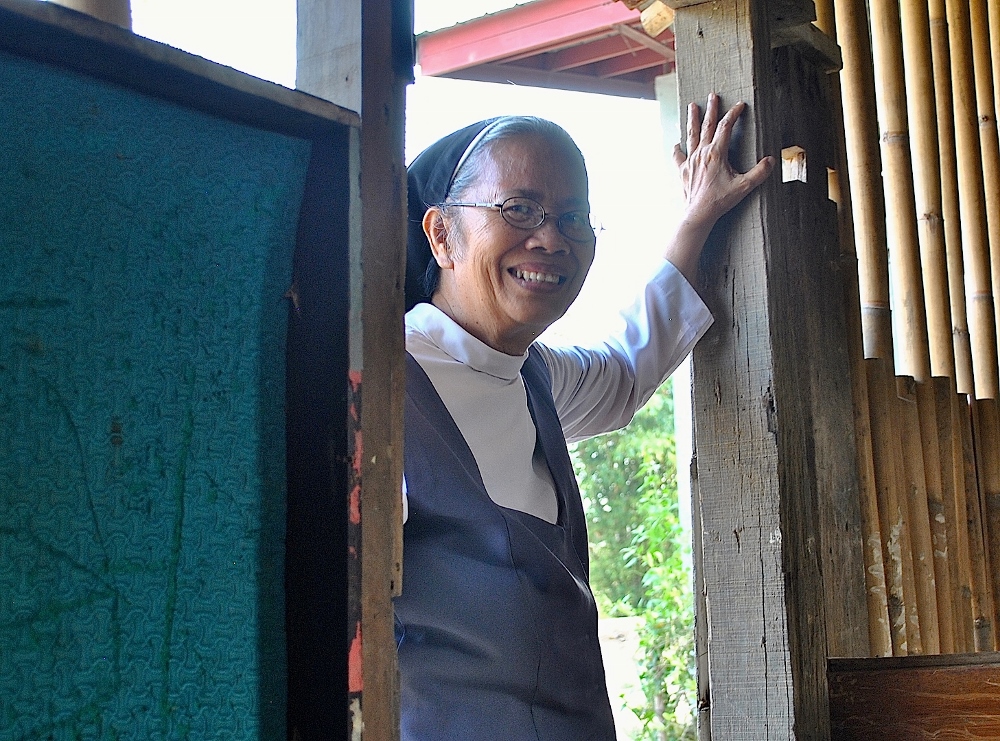 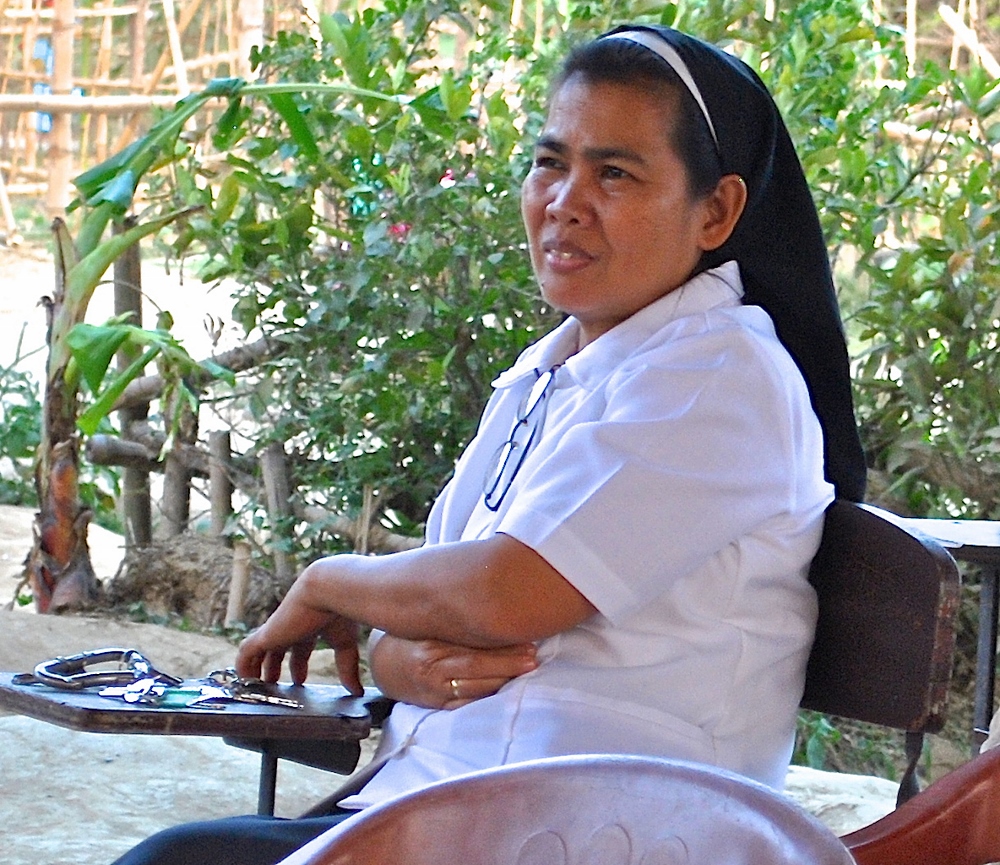 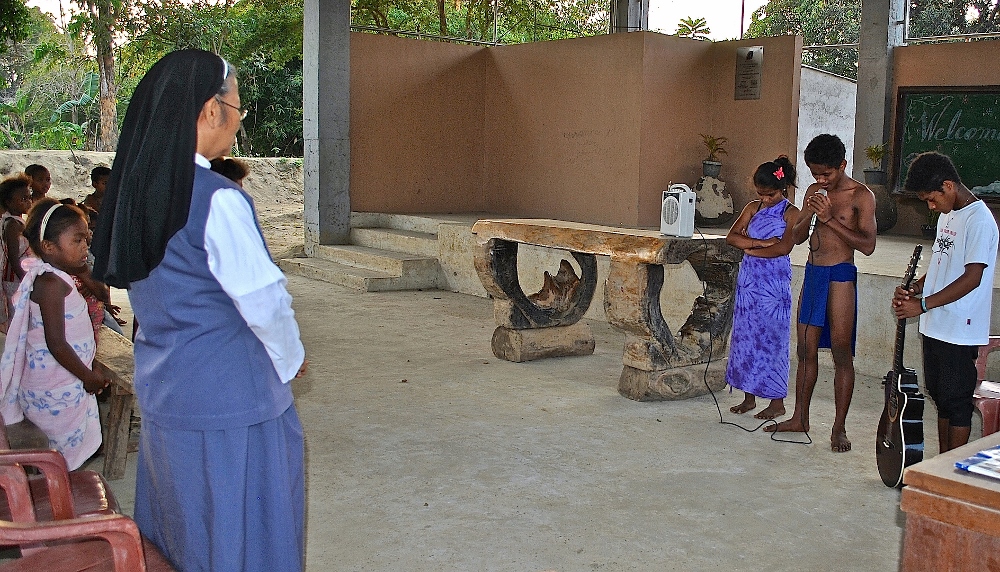