At the heart of the matter: Women religious at the United Nations

• Related story - Q & A with Sr. Margaret Mayce: Corporate involvement at the U.N. 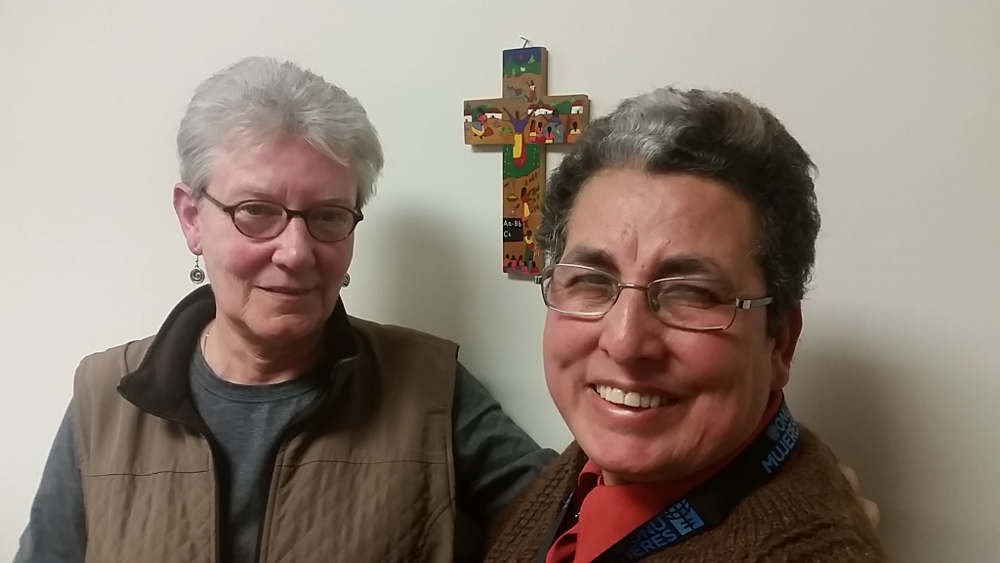 New York, N.Y. — It is a cliché to say the world comes to the United Nations – to lobby, to be heard and to take a stand at the world’s international forum and town hall.

But it is more than a cliché – it's also true, and Catholic women religious are no different than other groups. Dozens of religious were at the United Nations recently to be visible and present for issues they care about. Among them: sexual violence, human trafficking and poverty.

Women were here for the March meetings of the U.N.’s Commission on the Status of Women, often called by the acronym CSW, as well as a parallel event known as the NGO CSW Forum.

Thousands of women from throughout the world attended the meetings, which marked the two decades since the 1995 Beijing Declaration and Platform for Action at the U.N.’s Beijing World Conference on Women. (The U.N. Commission on the Status of Women was established by a U.N. resolution in 1946.)

“It’s important for women to ‘own things’ – own the issues that are important to women,” said Dominican Sr. Bernadine Karge of Chicago.

South Asia was well represented at the events. Among those attending was Sr. Manju Kulapuram. She represented the Forum of Religious for Justice and Peace, known by the acronym FORUM, a coalition of sisters based in Telangana, India, working on social justice concerns.

“This is a small group of people trying to strike out the root causes of problems that are affecting many,” she said.

There are as many as 100,000 women religious in India. But many of the sisters who embrace calls in the realm of service (medical and education fields, for example) often shy away from becoming involved in social justice advocacy work.

Kulapuram and Sr. Celine Paramunda are not reluctant at all. As the Medical Mission Sisters representative to the U.N., Paramunda believes she and others must “bring the voices of the grassroots to the U.N.” 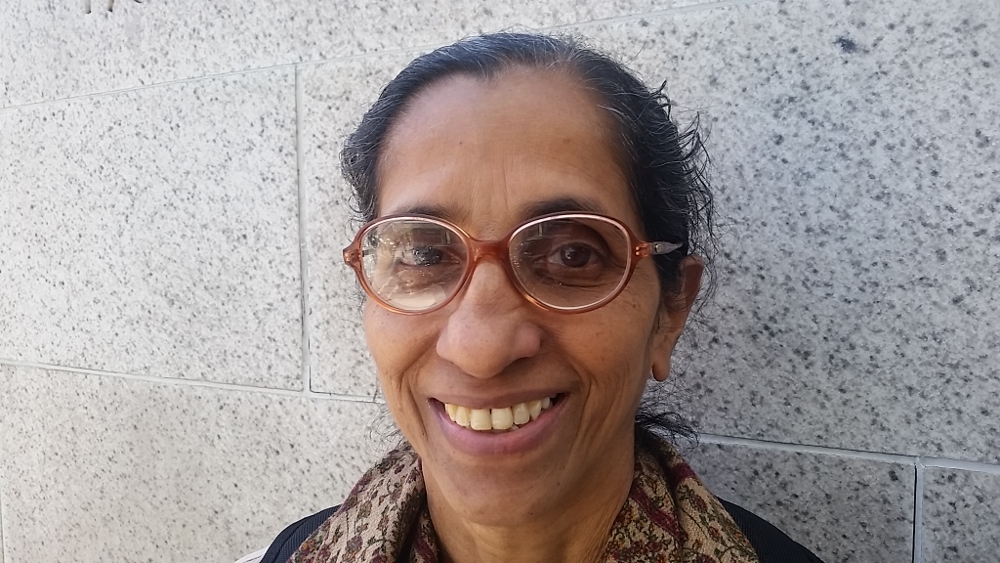 Sr. Manju Kulapuram. She represented the Forum of Religious for Justice and Peace, known by the acronym FORUM, a coalition of sisters based in Telangana, India, working on social justice concerns. (Chris Herlinger)

In doing so, “it gives you strength,” she said, “that I am not the only one doing this work, and that the issues we’re working on are not just national issues, but international issues.”

One concern in particular focus for Kulapuram, Paramunda and others from India is that of mining – not an issue that makes many headlines in the United States. But it touches on a host of attendant problems, including health, environment, human trafficking and land grabs.

“Mining touches a lot of things,” Kulapuram said, noting, too, mining connects to the issue of indigenous rights. Indigenous communities tend to be the most abused by land grabs by mining companies and from the resulting environmental damage

Mining is an issue keenly watched by social justice advocates not just in Asia but in Latin America, too; at least 20 non-governmental groups working at the United Nations belong to a “mining working group” that studies and tracks mining issues, watches for abuses and lobbies governments when needed.

During the recent U.N. events, Kulapuram spoke at a forum focused on “Unearthing Development: Women's experiences and extractivism.” She spoke specifically about the case of Sr. Valsa John, a member of the Sisters of Charity of Jesus and Mary who was killed, activists say, because of her outspoken advocacy of indigenous rights against mining interests. She died in 2011 in the eastern state of Jharkand, and her death was condemned by the Roman Catholic hierarchy in India.

Kulapuram, who worked for nearly a decade in the same area as John, said John’s life and example are not unlike the story of Jesus, who “became incarnate among the people and in solidarity with the people,” she said. That led to confrontation with authorities.

If that keen example of religious commitment drew interest at the U.N. events, the quieter work of sisters like Sr. Emmanuela Okafor of the Dominican Sisters of St. Catherine of Siena, Gusau, Nigeria, was no less important. Okafor attended the women’s event as a representative of Dominican sisters throughout Africa. 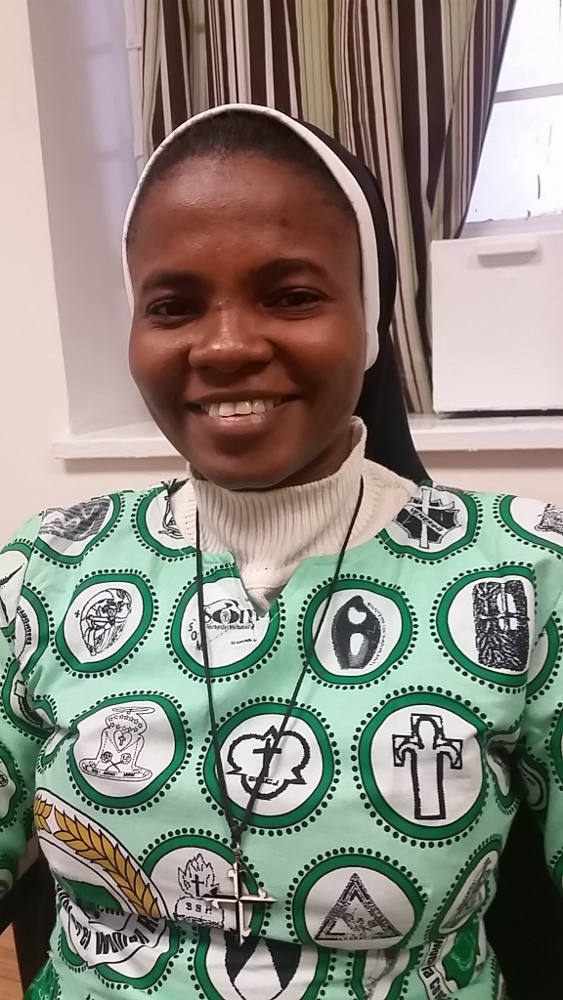 From the northern Nigerian state of Zamfara as a medical worker, Okafor brought to the forum her experience in working with other women in tackling the problems of poverty, illiteracy, poor health care and early marriage for girls. Her region is also known for its security problems, as well as inter-religious tensions between Christians and Muslims that she said are being exploited by political figures.

It is important, Okafor said, that the U.N. continue focusing attention on violence against women and for the continued empowerment of women – though she acknowledges the problems experienced by women will not be solved quickly. “Most men feel they are strong, that they are powerful,” she said. Unfortunately, too many “use their power in a negative direction.”

What might help women most in the face of such problems? “Economic power and education go hand-in-hand,” she said.

Sr. Michele Morek, coordinator of UNANIMA, the U.N.-based coalition of Catholic congregations advocating on a host of social concerns affecting women and children, noted that there is not a consensus among nations about some issues. The rights of women and the relationship of sex work to trafficking are two such concerns.

Nor is there a consensus on those issues among many advocacy groups, both religious and non-religious. But broadly, she said, her group finds common cause with others on highlighting the need for nations to address the issues of poverty, human trafficking, migration, water and sanitation and climate change.

She acknowledges that work within the U.N. system can be tricky to master, and those who do it must be committed to incremental change. It can take a decade of work, she said, to fight for the inclusion of a single word into a U.N. document. (And that has actually happened, she said.) 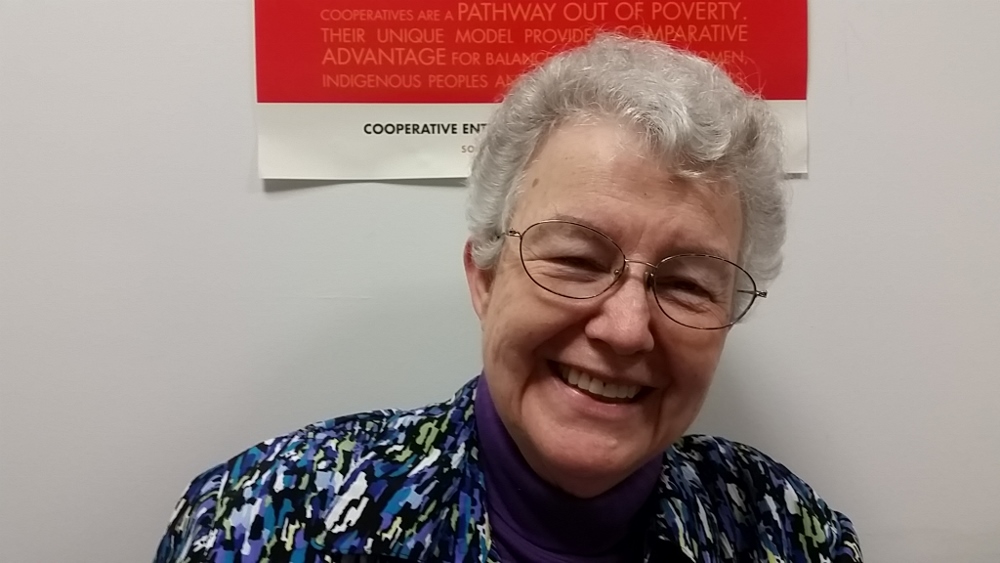 That may confound outsiders. But Morek and others defend the U.N. as something the world needs. “This is the only place in the world where Honduras sits down next to Iceland,” said Morek, who previously held leadership positions with the Ursuline Sisters of Mount Saint Joseph. “Where else does that happen? It’s important to have such a place.”

It is also a place where non-governmental groups – like those aligned with Roman Catholic sisters – “remind the U.N. of its commitments” to women, children, migrants and the marginalized, she said.

Morek and others are proud of their work, and see it paying off more and more. “Women’s voices are becoming more powerful here,” she said.”We keep making noise.”

The United Nations moves slowly, said Jean Stoner, the U.N. representative of the Sisters of Notre Dame de Namur. “But it does move,” and there is constant need for both vigilance and patience within the U.N. system.

“Women and children bear the brunt of violence and poverty, as well as the problems of migration,” she said. “It’s extremely important that governments [and U.N. member states] are challenged and pushed to do more.”

That is a role for which Catholic sisters are particularly well-suited.

“Women go to the heart of the matter,” said Sr. Margaret Mayce of the Dominican Leadership Conference. “They talk about what is important, what affects people most.”

[Chris Herlinger is a contributing writer to Global Sisters Report and NCR, an author and senior writer for the humanitarian agency Church World Service.]

At the heart of the matter: Women religious at the United Nations