Many people in India, regardless of their religion, use a certain Catholic nun’s hymns when they want to praise God. However, few know their author or her struggles to be able to compose them.

Over the past 26 years, Sr. Pushpanjali Paul has produced 15 volumes of audio cassettes and compact discs containing more than 300 hymns in Hindi, India’s national language. These hymns are commonly used in Christian churches across northern India and at functions of different religions, too.

The 57-year-old nun is a member of the Missionary Congregation of Sisters, Servants of the Holy Spirit (SSpS), who are popularly known as Holy Spirit Sisters.

“People in Hindi-speaking areas, irrespective of their caste or religion, use her hymns to worship God," said Archbishop Emeritus Paschal Topno of Bhopal, one of her supporters and admirers. "But sadly no one really knows who wrote those inspiring hymns,” he told Global Sisters Report.

The Jesuit prelate claims the nun’s songs appeal to all faiths. “Sr. Pushpanjali is totally committed to giving glory to God through sacred music. Unfortunately, she was misunderstood a lot,” says Archbishop Topno, who was former provincial of Jesuits in the central Indian state of Madhya Pradesh.

The nun, who hails from Madhya Pradesh’s Khandwa District, says she has faced numerous hurdles within the congregation as well as outside while pursuing her mission.

Pushpanjali (her name means "floral tribute"), as she prefers to be called, joined the Holy Spirit congregation’s central Indian province in 1979, after completing a bachelor degree in home science. After her first profession of vows two years later, her superiors appointed her to teach in their schools.

She carried on with the assignment for 15 years, but her inner call to serve through sacred music tormented her soul. She took her final vows in 1987.

“From 1989 to 1999, I kept pleading with the then-superiors about my desire to totally focus on arts and music,” Pushpanjali told GSR.

As the superiors refused to oblige, she took a break from her religious life for three years, she says.

She claims that everyone in the congregation knew that her passion was for art and music, but she was forced to teach in St. Raphael’s Higher Secondary School, Indore, Madhya Pradesh’s commercial capital.

“They neither opposed my plan totally nor let me continue with my passion. All I received were very lukewarm responses,” she says.

She then consulted her spiritual director, the late Divine Word Fr. Thomas Lynch, who advised her to write a letter to the then-provincial council seeking permission for a one-year leave of absence in 1999.

“As I was adamant on my decision, they converted the leave of absence into exclaustration in May 2000,” she recalls. (Exclaustration is permission for a religious to live outside the order for a period of time while still observing vows and obligations.)

When a nun takes a leave of absence, the congregation is obliged to take care of her basic maintenance. In exclaustration, the individual has to fend for herself. She now says the exclaustration was God’s plan to strengthen her in her mission.

Why did her congregation oppose her?

Sr. Preethi Thomas, who was a Catholic provincial councilor then, recalled that the province could not accommodate Pushpanjali’s demand as it was in the initial stage of growth and needed everyone to carry on with traditional works.

Thomas says the province’s opposition proved a blessing in disguise for the musician nun. “If she had not taken the risk of sabbatical, she would not have become what she is now,” she told GSR. Thomas later became the provincial and readmitted Pushpanjali to the congregation after her three-year exclaustration in 2003.

Thomas, who is now the principal of St. Raphael’s School, commended Pushpanjali for her resoluteness. “She is so passionate about her mission and has done a commendable job,” she says.

Pushpanjali says she came face to face with the stark realities of life from the beginning of the exclaustration.

“After 20 years of comfortable convent life, I had to find resources for my stay, food and other expenses and also to translate my dream into reality,” she recalls.

Initially, officials of her home diocese of Khandwa had offered to help her. “It all turned out to be a huge disappointment within a month,” she says.

She then moved to Bhopal, some 120 miles north of Indore, where she had earlier worked as the director of junior sisters in 1996 and 1997.

During her exclaustration, she launched Sadhana Sanchar ("spiritual exercise and communication"), a multi-purpose institution.

“I stayed in three different rental houses from June 2000 to December 2002 before shifting to a room built for a watchman,” she recalls. She moved in there after setting up a temporary kitchen and a toilet.

She recalls the only money she had when she left the convent was 5,000 rupees (U.S. $110 then) given to her by Fr. Lynch, her spiritual director.

She is the second child among six boys and five girls in a first-generation Catholic family of a catechist. One of her sisters, a federal government employee, met her food and accommodation expenses.

“Merely meeting my personal expenses was not the issue. I fasted and prayed to God to show me the way. An intuitive spirit instructed me to go to Allahabad diocese in Uttar Pradesh state.” Allahabad is a major city in the northern Indian state of Uttar Pradesh, about 400 miles northeast of Bhopal.

The diocesan officials in Allahabad offered her money to buy land for her new initiative. She bought eight acres of land in Bhopal in May 2001, exactly one year after she took the break from the congregation.

She had already opened Sadhana Sanchar in her second rented house that Archbishop Topno blessed in January 2001. The new place is situated at Kalkheda, a village on the outskirts of Bhopal.

Sadhana Sanchar is a unit under Sarva Samaj Sanskriti Seva Sangh ("at the service of humanity and culture"), a charitable trust she founded in the first year of her exclaustration.

“We work in the overall well-being of a person’s moral and spiritual values to introduce one to the kingdom of God. This includes inter-religious and interfaith activities,” Pushpanjali explains.

Among other things, the center also organizes training, dance drama, dialogues and meditation.

The sprawling campus has a main building with five rooms where she stays along with four girls and a priest to support her.

She has also built a two-storied building with six furnished rooms where people from any religion, caste or language can come to meditate or spend time in solitude. Another building with a single room, kitchen and toilet was created for giving music classes to small children.

A fourth building is under construction and will host inter-religious meditation, with a prayer hall that will also serve as a chapel for about 70 people. She has also built a statue of Mother Mary with infant Jesus in her lap in an Indian style.

Throughout all this time she has had to fight a battle of another kind — threats from squatters who used to occupy a portion of the land she had bought. The intruders, who had been using the land for years, even threatened to eliminate her when she staked claim on it, her lawyer, Enosh George Carlo, told GSR.

Her opponents also got local villagers to gang up against her, alleging that she was there to convert the poor to Christianity. When the death threats became too serious, the administration sent four police personnel to guard her and the campus, Carlo recalls.

The lawyer says he is greatly impressed with the nun’s mission. “Her life is a testimony of her strong faith in God,” he says.

Eugene D’Souza, another admirer and Catholic layman in the Bhopal archdiocese, says the nun’s “very touching songs” help him get closer to God.

Pushpanjali got her first cassettes of 35 hymns released as three volumes in 1989.

According to her, she wrote hymns and performed without any formal education until 1990 when she got a chance to do a master’s in music. She also completed another master’s course in Hindi literature in 1992 and completed a six-month course on pastoral communication in 1998 in Rome.

Bishop Chacko Thottumarikal of Indore finds Pushpanjali naturally talented in arts and music. The Divine Word prelate, who is the chairperson of the Social Communication Office of the Federation of Asian Bishops’ Conferences, says the nun is a lyricist, composer and a good stage performer. She performed a prayer dance at the altar of St. Peter’s Basilica in Rome at the time of the Synod of Asian Bishops in 1998. She also has performed in the U.S., Germany and Ireland.

“Despite her talents she had her share of hardship,” Thottumarikal says, adding she was misunderstood like other artists. Her suffering was a little more since she is a religious, he says. “Many religious persons facing such troubles would give up their passion and fall in line. She, however, continued to persist with her mission.”

Fr. Stany Michael D’Souza, a former director of a music school in Pachmari, a hill station in Madhya Pradesh, says Pushpanjali’s lyrics and musical compositions are of a high standard. “They reflect her personal communion with the Blessed Trinity and her deep reflection on nature and God’s creations,” says the priest, who now helps her in her mission.

He says that listening to her hymns puts one in direct contact with Triune God. Her contribution to the church in north India through her hymns is beyond imagination, he adds.

Now, Pushpanjali is engaged in promoting ecumenism and inter-religious dialogue for peaceful co-existence and communal harmony in a country like India with diversified cultures and religions, especially through fine arts. 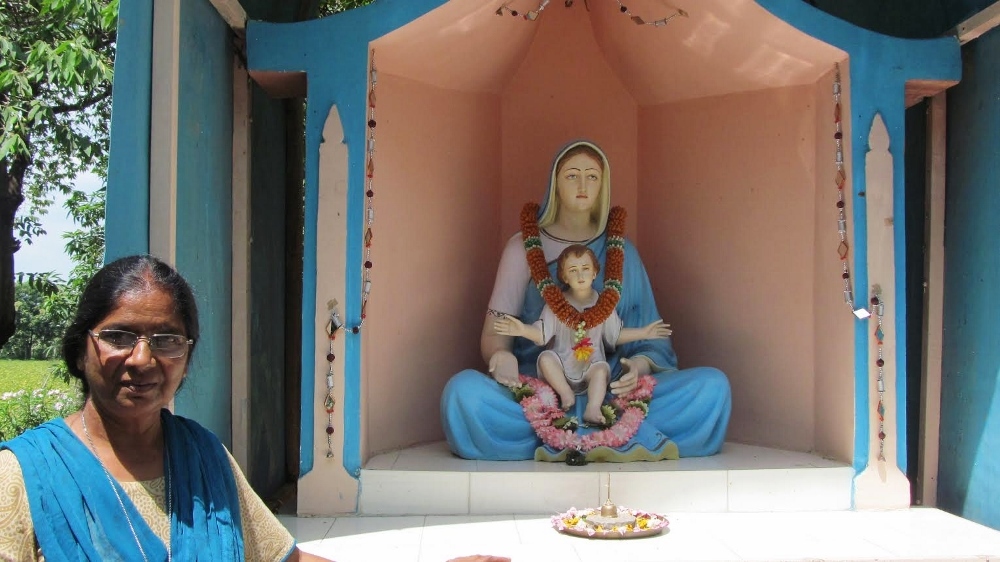 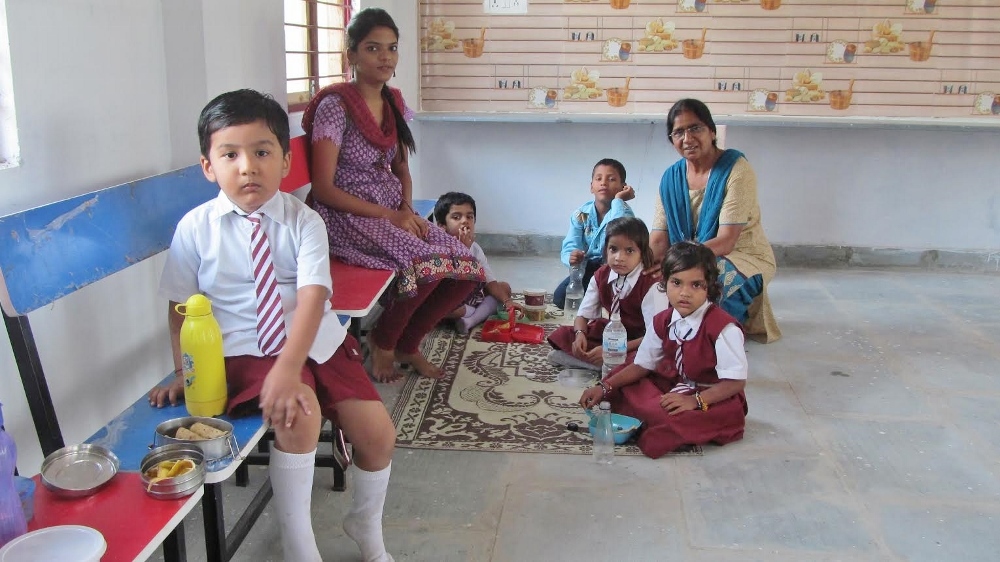 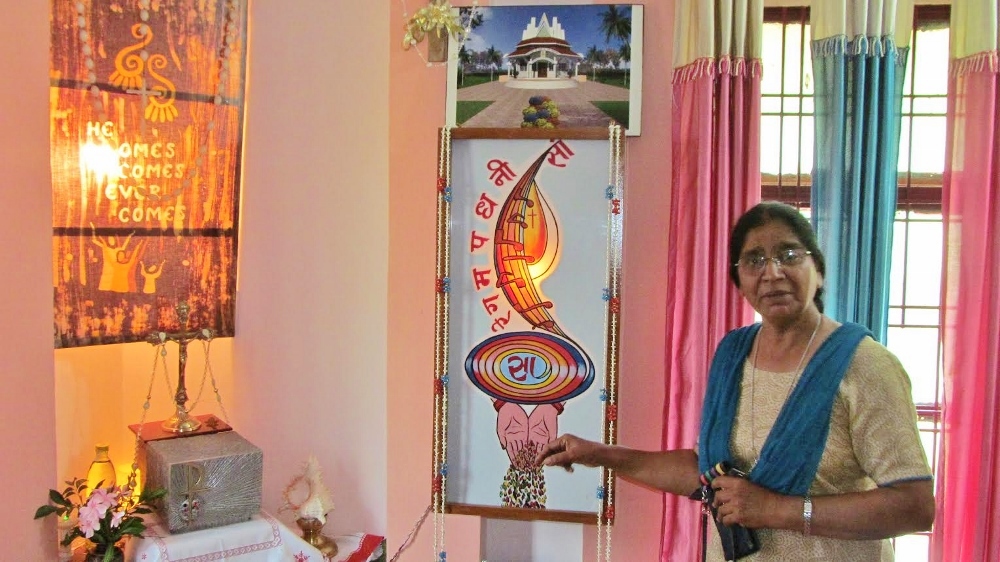 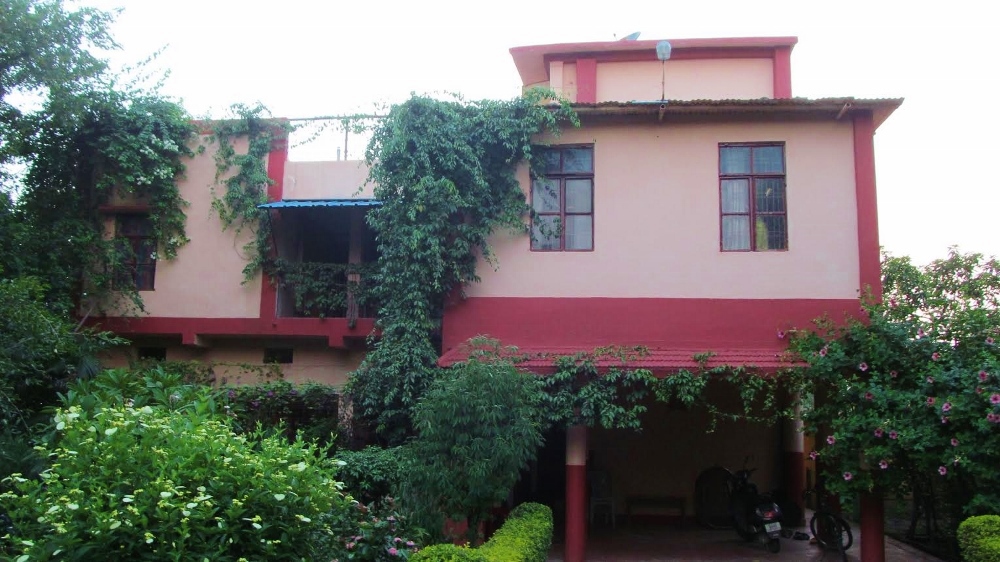 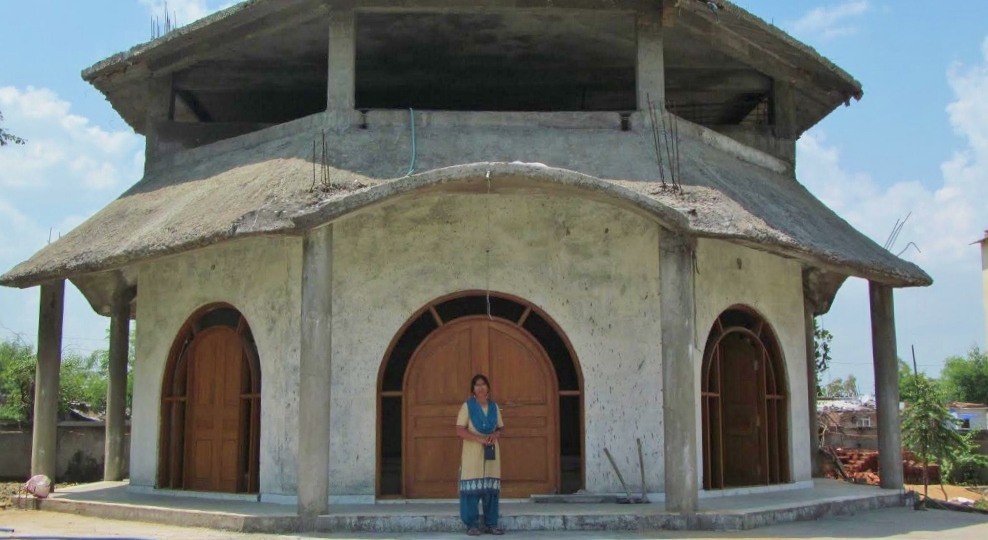