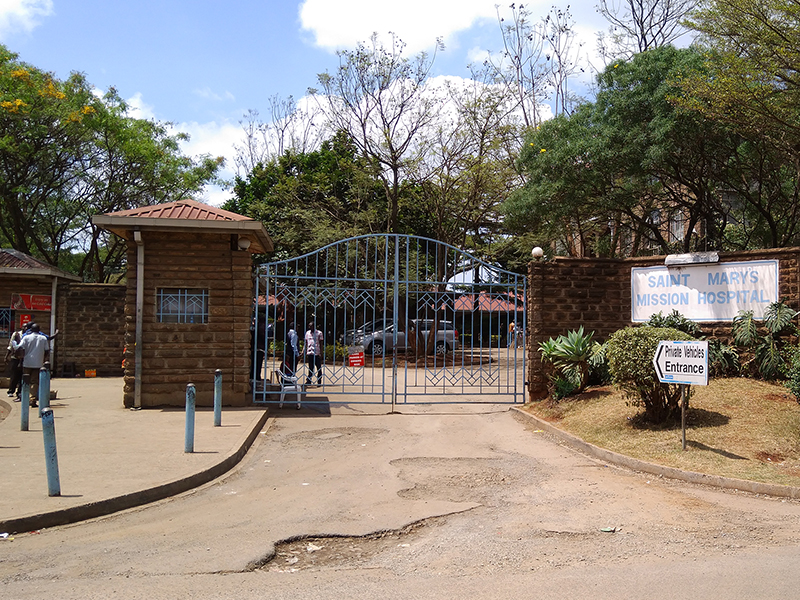 St. Mary's Mission Hospital in Nairobi, Kenya, is one of the properties at the center of a yearslong power struggle between the Assumption Sisters of Nairobi and Fr. William Charles Fryda. (RNS / Ken Mwirigi / Creative Commons)

Nairobi, Kenya — A dispute between an order of nuns and an American priest over control of two major hospitals for people who live in poverty has ended with the nuns — backed by a court order and the police — storming one of the hospitals.

The battle for the St. Mary's Mission Hospitals has pitted the Maryknoll priest against the Assumption Sisters of Nairobi in the courts for more than six years and finally ended when the nuns, who had already taken over the Nairobi hospital, entered its sister hospital on Jan. 19.

"They stormed the hospital in the morning. The sisters came with a contingent of police officers and other civilians. We are now handing over. It's all peaceful," said Fr. Bob Silvio, chaplain of the St. Mary's hospital in Elementaita, 75 miles northwest of Nairobi.

The struggle between Fr. William Charles Fryda, who is also a physician, and the sisters worried in particular people who live in poverty in the region. They rely on the busy hospitals for medical care many say they could not access elsewhere.

The Nairobi hospital alone, on average, serves more than 1,200 outpatients a day and 300 inpatients. Each month, its staff delivers 800 to 1,000 babies and performs 500 major operations and 500 other procedures.

Most of the clientele of both hospitals live in makeshift settlements and can't afford treatment in private hospitals or even government ones. But for less than a dollar, they can see a doctor and get a prescription or a laboratory test at a St. Mary's hospital.

"I have paid a hundred shillings [about $1] to see the doctor," said Eliud Gathogo, a young accountant, as he stood in a long line to see a doctor at St. Mary's in Nairobi recently. "I am now waiting for a laboratory test. I have been having chest pains, so I woke up early to seek treatment."

The legal battle between Fryda, who was unavailable for comment for this story, and the nuns has made headlines across the nation — for interest in the hospitals but also for the spectacle of an American priest battling local sisters.

Four months after a court declared the sisters the hospitals' rightful owners, and as late as the day before the nuns took over the Elementaita hospital this month, Fryda had intended to keep fighting, Silvio said.

"He feels the courts are being influenced but maintains he is not leaving anytime soon," Silvio had said.

In short, Fryda said the hospitals were his since he had founded them (the Nairobi one opened in 2000 and the one in Elementaita in 2007) and built them with money he alone had raised.

The sisters said the hospitals were their idea and were set up under an agreement between the sisters and the Maryknoll Fathers of New York.

Frustrated with Fryda's refusal to hand over the hospitals, the nuns took physical control of the Nairobi facility Dec. 28, installing new management.

"We have taken over the hospital. ... It's now in our hands," a nun belonging to the order told RNS at the time, saying she could not give her name since she is not authorized to speak for the Assumption Sisters of Nairobi.

Margaret Wanjiru, who sells boiled eggs, sausages and boiled corn to the patients at the gate of the Nairobi hospital, had watched the entire drama unfold.

"They came with a huge contingent of security men and moved everybody from the gate. We heard cries of patients and saw the older staff running all over. I think there was some resistance," Wanjiru said.

Fryda, as a foreigner, cannot own the land on which the hospitals sit. But in 1999, before the first hospital opened, he founded a corporation to run the institutions. With the incorporation, the sisters feared that the priest was trying to wrest control of the hospitals, control that — the courts eventually agreed — the original agreement between his order and theirs had assigned to them.

They also complained that he started a medical university and children's orphanage without consulting them.

Fryda, who was suspended by his order in 2013 for refusing to drop a lawsuit against the nuns, arrived in Kenya from Tanzania in the 1980s and found the sisters running St. Mary's Hospital as a dispensary.

He and they agreed to expanding the dispensary into a hospital and bought more land, with the sisters acting as trustees of the land, church sources said.

Patients hope the hospitals will continue to serve them well.

But Fr. Joachim Omollo, a Roman Catholic priest familiar with the hospitals' development, said donors cultivated by Fryda are still essential to the institutions but may not continue to open their wallets without Fryda on the scene.

"Paying doctors, buying the medicines and equipment is quite an expensive affair," Omollo said. "I fear the hospitals may collapse."