Sr. Rose Anto says she was not frightened when she was taken inside the operating room in January to have one of her kidneys removed. Anto was celebrating her silver jubilee year of being a nun by tendering a lifesaving gift to a Hindu man, who was unlikely to have hope of survival otherwise.

A few hours after the successful surgery at Kochi, in the southern Indian state of Kerala, Anto was cheerful and thankful to God for making her 25-year dream come true.

"God gave me an opportunity to donate my kidney, in my jubilee year of sisterhood, to a person who needed it most," she told GSR.

A team of doctors on Jan. 19 removed one of her kidneys and transplanted it into Thilakan Velayudhan, 47, whose kidneys were in the late stage of disease.

Velayudhan completed his mandatory rest in April and left Kochi to return to his hometown of Irinjalakuda in Kerala. Velayudhan, who is a bicycle mechanic, says, "Sister was sent by God as an angel to save my life." He wants to resume work after he recuperates and begin to lead a normal life, free of the weight of regular dialysis treatments.

His wife, Saritha Velayudhan, told GSR from Kochi by phone that, without the sister's mercy and kindness, her husband wouldn't have been alive today. "We are deeply indebted to the sister."

Dr. Malini Thomas, a pathologist and former principal of the Government Medical College, Kozhikode, in Kerala, says that healthy human beings have two kidneys, but a normal life is possible even if they have only one functioning kidney.

For the last 25 years, Anto has been waiting to donate one of her kidneys to a person who was unable to find a donor or to afford the costly surgery.

Anto, 54, was discouraged from donating her kidney by many of her friends and colleagues who feared for her life.

But when a professor at a nearby college heard about her plan to be a kidney donor, he contacted her and mentioned Velayudhan. She consulted with diocesan Fr. Davis Chiramel, founder and chairman of the Kidney Federation of India at Thrissur, Kerala. Chiramel, known as the "kidney priest," having donated his own kidney to promote organ donation, gave Anto guidance, support and encouragement to proceed with her plan.

The federation registers names of people who need kidneys and has helped more than 80 people with transplants since it was established in 2009, Chiramel says.

Looking back on her long effort, Anto says, "My inspiration and motivation to donate my kidney came from my love for Jesus and from the Gospel values of giving."

For 18 years, she was a member of the Congregation of the Holy Family. A few years ago, she left the congregation to focus more on social work. She leads an independent life as a religious woman at Irinjalakuda, where, since 1988, she has been a professor of Hindi (India's national language) at the Holy Family-run St. Joseph's College for Women.

"Today, I am alive and healthy because of the sister,'' says 37-year-old Shaju Surendran.

Surendran's right kidney stopped working when he was 19. After 17 years, his left kidney also began to deteriorate. As soon as his doctors recommended a kidney transplant without delay, he contacted Chiramel at the Kidney Federation, where he had registered his name to find a possible donor. Chiramel informed him about Paul, who was willing to donate her kidney. After medical tests and legal procedures, the transplant was done in April 2017.

"I am hale and hearty now," Surendran told GSR. "I am also searching for a job as a [private] driver."

Surendran spent about 1.5 million rupees (roughly $22,000) to do the surgery. "I had to sell the only small land I had to raise the funds," he said.

"My friends and relatives chipped in. Sister was also kind enough to donate a sum of 100,000 rupees [about $1,500] to meet the costs," Surendran remembered with gratitude.

"I did not donate my kidney for money or publicity," Paul, a former headmistress of Infant Jesus School at Aranattukara, near Thrissur, Kerala, told GSR by phone. "I have been looking forward to help save a life through a personal sacrifice."

According to the The Lancet Global Health journal, chronic kidney disease is recognized as a major medical problem in the world. There were 400,000 kidney patients in India and many of them are waiting for a transplant, according to a report in July 2016 in the Daily News and Analysis, an Indian newspaper.

Chiramel, 58, donated his kidney to a man of Hindu faith in 2009. He says that about 10 Catholic sisters in Kerala have donated their kidneys either to their relatives or to strangers.

Besides the sisters, 15 priests and one bishop in Kerala have donated their kidneys, says Chiramel, who is an honorary member of the National Kidney Foundation in the United States. Chiramel has also promoted a "kidney chain," in which a relative of an organ recipient in turn donates a kidney to an unrelated person in need. This idea has reduced the reliance on a black market kidney trade that has been an issue in India despite laws against it.

Since 2014, four sisters from the Congregation of the Mother of Carmel have donated their kidneys, Chiramel says.

This was the result of a communication issued by the 2010 assembly of the congregation that granted permission to its sisters to donate their organs, including kidneys, provided their parents and siblings gave them the consent, said Mother of Carmel Sr. Little Therese.

Therese, 51, is the first sister in her community to undergo a kidney transplant, which was done at the Catholic-run Lisie Hospital in Kochi. She donated her kidney to another sister, Alina Anto, who belongs to the congregation's Wardha Province in central India. (Alina Anto is not related to organ donor Rose Anto.) At the age of 24, both of Alina Anto's kidneys failed and she had to return to her home state of Kerala.

During that time, she had registered her name with the Kidney Federation for a suitable donor.

When an announcement was made within the congregation about Anto's worsening health, Therese stepped forward.

"I thought I was going to die, but God saved me and gave me a second life through Sister Therese," Anto told GSR by phone. The 27-year-old sister is healthy now, though she has to take medicines regularly. She also plans to pursue her studies privately in Kerala.

"Since I was not donating my kidney to a blood relation, I had to go through many legal formalities, including submission of medical documents before a magistrate and an attorney, and face a police inquiry," said Therese.

Just before the surgery, a medical ethics committee also interviewed her and her family to make sure that she was donating with her full knowledge and conviction, and that she had permission from her parents and siblings to donate. Her family initially opposed the idea but agreed after intensive discussion.

Therese's inspiration to be a kidney donor came from John 15:12, "My command is this: Love each other as I have loved you," and from a public lecture by Chiramel on kidney donation.

She says she thanks God for making her a tool to give life to another person.

Another Mother of Carmel sister, Donna Rose, donated her kidney to her older sibling, Sr. Anitha Rose, 56, who belongs to the same congregation's Bhopal province in northern India.

Anitha Rose went to her home state of Kerala for dialysis after her doctors informed her that her kidneys were dying. The dialysis did not help, and the doctors recommended a kidney transplant. While scouting for a new kidney from a donor, her biological sister, Donna Rose, underwent medical tests and found that they were medically compatible. The transplant was done in May 2017.

Fifty-year-old Donna Rose says, "I got my kidneys as a gift from God. As life is precious, I gave that as a gift to another person."

Last year Sr. Chaithanya Karakunnel, 44, donated her kidney to 43-year-old Saji Varkey, a stranger to her. When she made up her mind to do this, she informed Chiramel, who told her that Varkey was registered to receive a transplant. They were a match.

"Like Jesus, who gave to others, I had an inner call to give," Karakunnel told GSR.

Mother of Carmel Sr. Roshni Karikattu, who works as a teacher, donated her kidney to her own brother, one of her 10 siblings. Her youngest brother, Jiju Karikattu, was on dialysis after both his kidneys became dysfunctional.

Roshni's blood was tested and found to match Jiju's. The transplant was done in February 2017.

The Kerala sisters who have donated their kidneys are back at work and leading healthy lives.

Therese is on a walking mission and travels several miles on foot every day through villages and towns in Kerala. Rose Anto is heavily involved in organic farming and works in paddy fields, wearing her habit. Chiramel notably skydived in a fundraiser while visiting Great Britain the year after his kidney surgery.

The sisters are unanimous in saying they are willing to offer more sacrifices in their lifetime to glorify God.

In India, where commercial kidney transplant is rampant, what the religious women and men are doing is path-breaking, says Chiramel.

"I hope more people will follow in the footsteps of the religious women and men to save the lives of an increasing number of kidney patients in the country," he says. 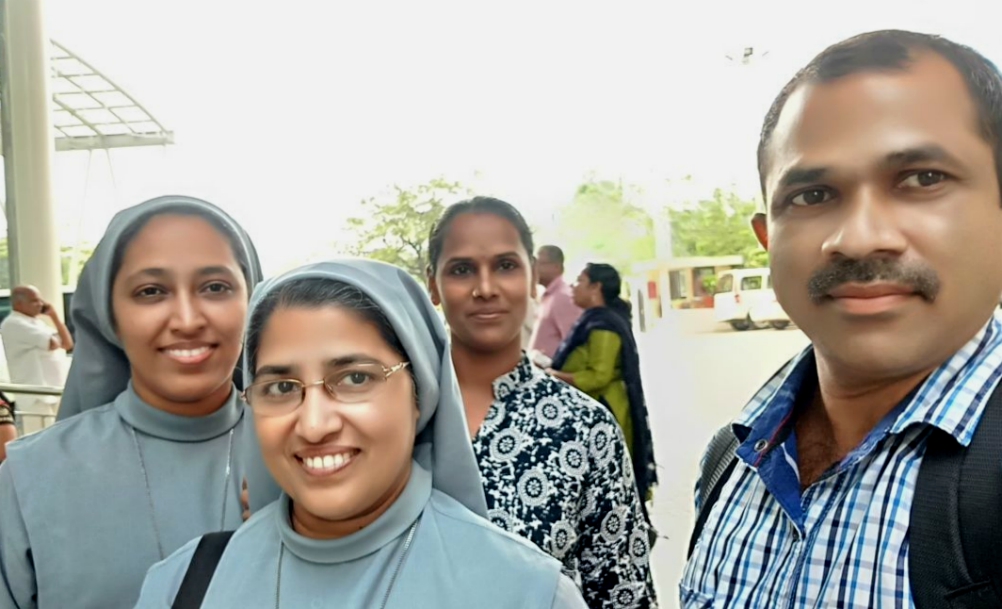 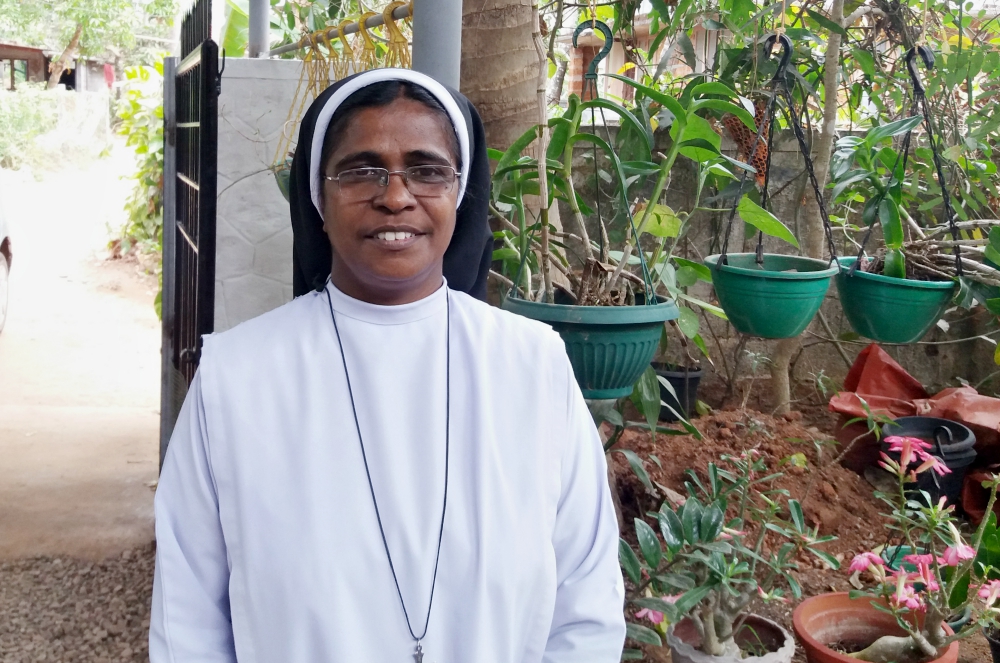 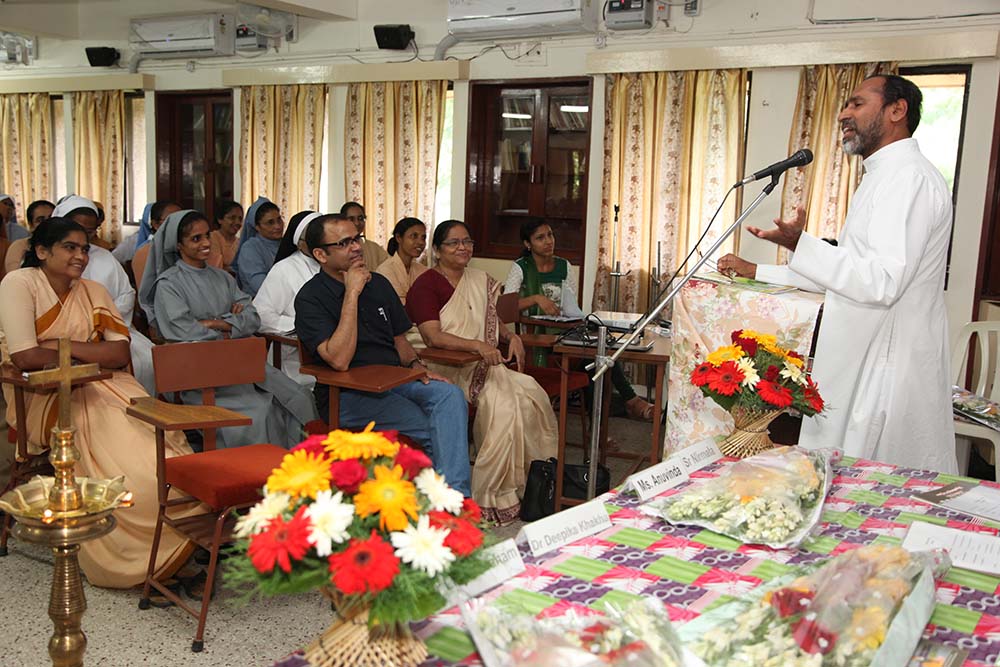 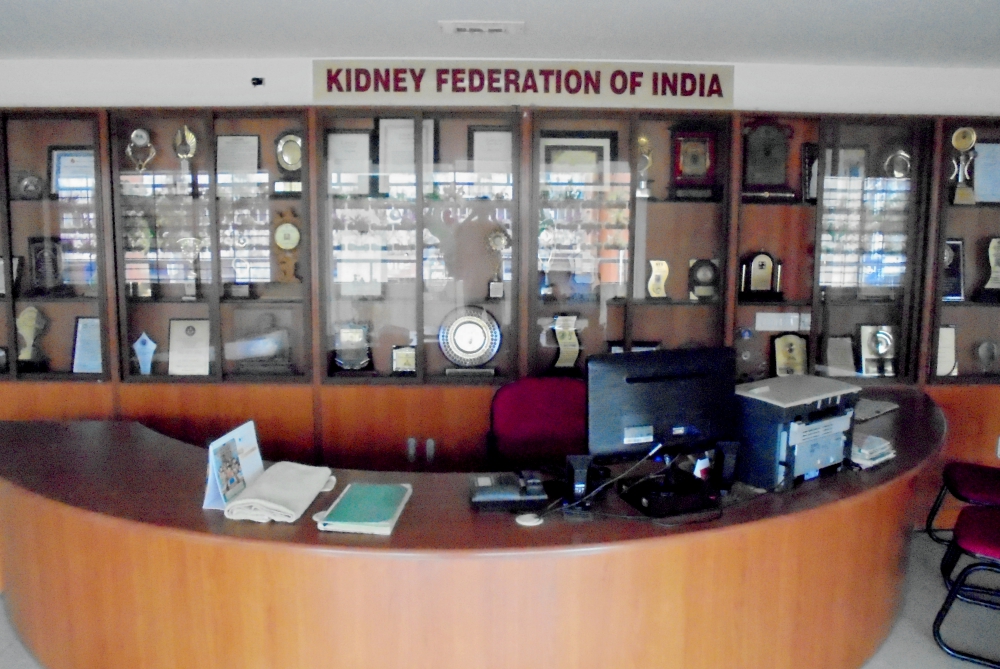 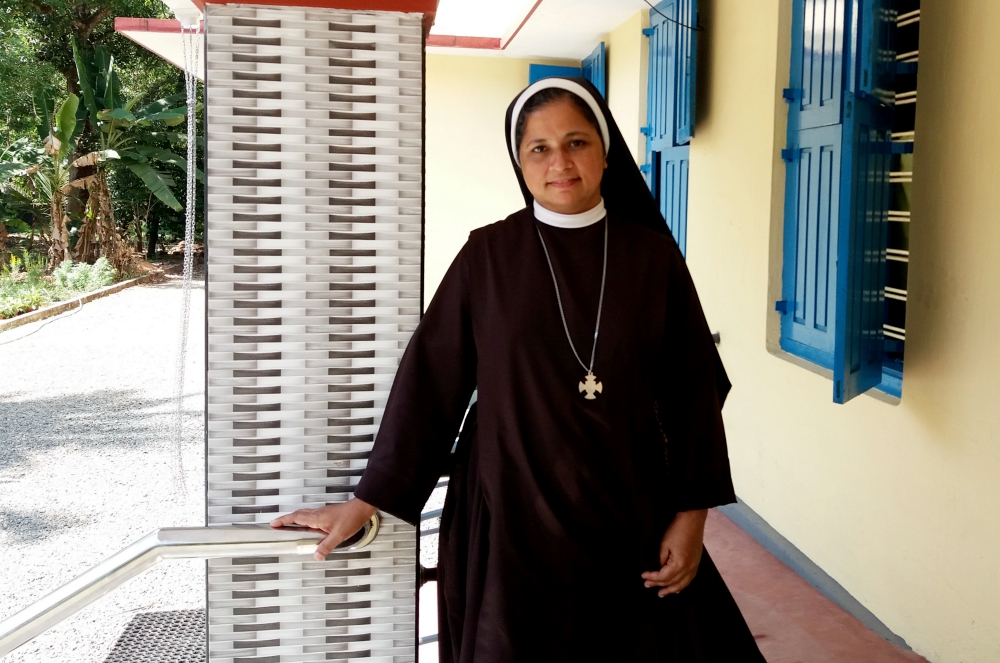 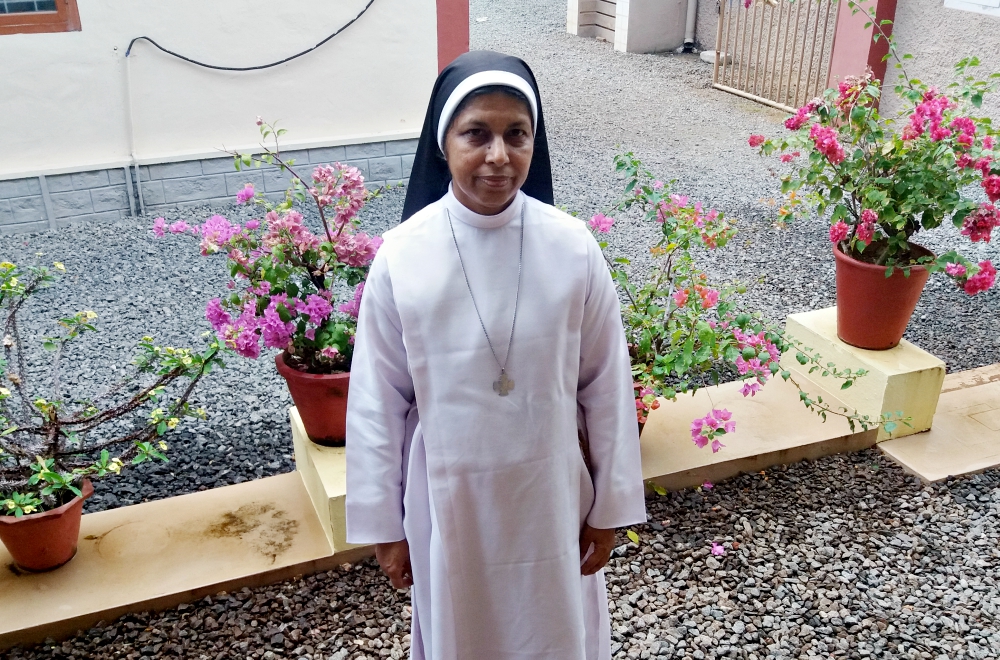 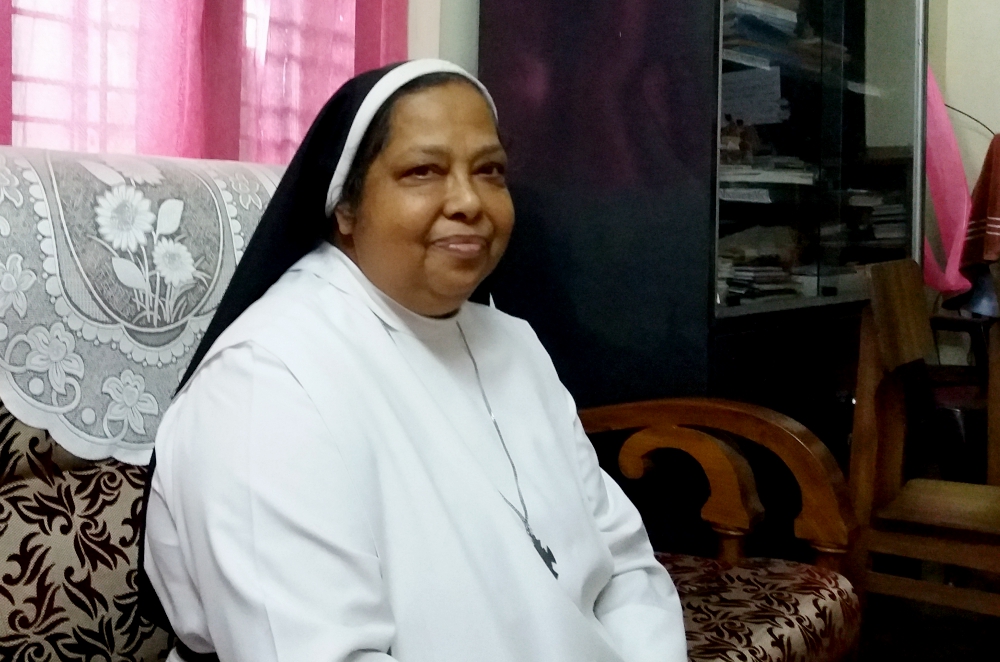 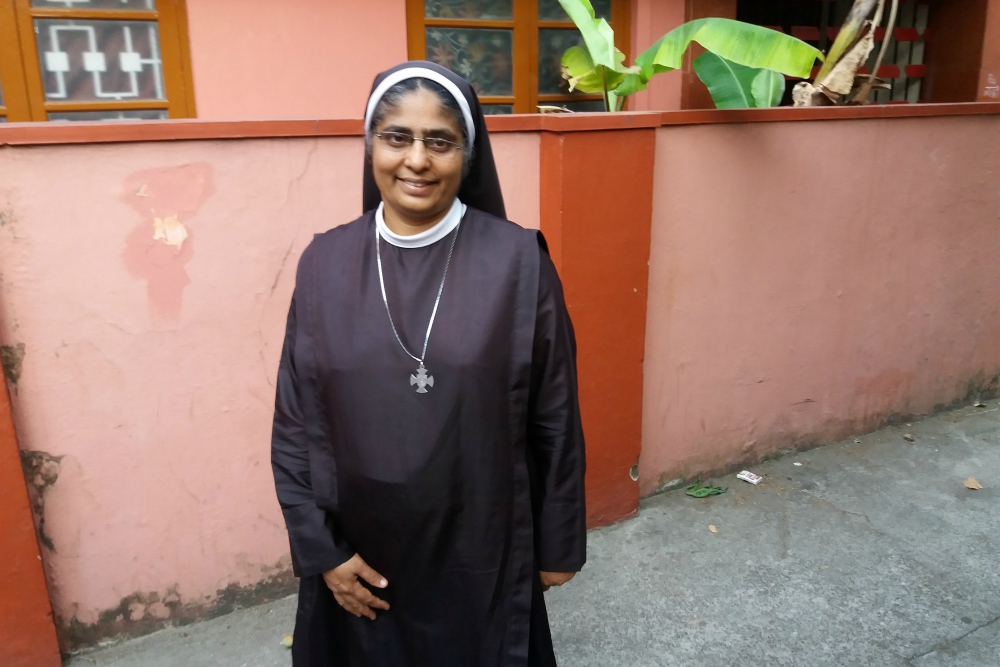