A septuagenarian Catholic sister has won the hearts of people, mostly Hindus, in Western India with her work among mentally ill persons found living on roadsides. Many call her the "Mother Teresa of Mithapur."

The local Catholic prelate is so impressed that he urges others in the church to follow the example of Sr. Elsie Vadakkekara of the Sisters of St. Ann of Providence in India, where preaching the Gospel has become increasingly difficult due to religious bias.

Many in Mithapur see in the 79-year-old bespectacled nun the presence of the divine among humankind.

Mithapur is a coastal town in Gujarat state, 625 miles southwest of New Delhi, the Indian capital.

"The people in Mithapur treat Sr. Vadakkekara like a living God," says Hasmukh Bharati, the priest of Nageshwar Jyotirlinga, a local Hindu temple. "Nobody can do the work she does," he told GSR, referring to the sister's care for people with mental illness who are found abandoned on roads. She feeds them every day.

The Hindu priest is so impressed with her work that he sponsors Sunday meals for her people. "My wife and I cook the meals for them," Bharati says.

His wife, Hema Bharati, nods and then adds that although the couple has three servants, they do not involve them in cooking for Vadakkekara's people. "We want to contribute something for the sister's mission," she told GSR.

On Sundays, the nun comes to their house with her driver, Sanjay Siruka, warmly greeting the Bharati family. Then they set to work filling large aluminum containers with food for distribution.

"We have not seen anyone doing such a selfless service," Bharati says as he watches the nun's vehicle speed away. "She feeds each one with a motherly affection. It is impossible for me to think of feeding such people."

Many in India view people with mental illness as dirty, potentially violent and even cursed.

Inside the vehicle, Vadakkekara sits on the rear seat and checks whether she has brought along sufficient paper plates and water pouches.

"We give rice, roti [flattened bread made of wheat flour], a mixed vegetable curry and a water pouch to everyone," she told GSR.

Siruka, a Hindu who accompanies the nun on her mission, says the quantity of food differs from person to person. "Most take two roti, rice and vegetables. There are some who eat eight or 10 roti. What is interesting is that the sister knows each one's requirement and distributes accordingly," he told GSR.

Siruka, who says he is a former alcoholic, joined the nun as her driver after quitting the habit. He is so involved with the work that he has never taken a day off since joining her.

"I know if I take leave, they may not get food in time. They keep waiting for us and, therefore, I do not miss a single day," he explains.

Vadakkekara says a woman helps her cook food in the convent except on Sundays.

As the nun's yellow vehicle passes through various lanes around Mithapur, covering a radius of 17 square miles with at least 40 stops, people rush toward the vehicle to collect their share of food. Currently, she feeds 45 people who are mentally ill and living in unhygienic and inhuman conditions.

In some cases, the sister or her driver calls out their names and they come out to collect their meals. Others remain at their place, under a tree or in the corner of an abandoned building. In that case, the nun or Siruka seeks them out to hand them the food.

"The sister has given each one a name and they respond immediately when we call them," Siruka says.

Many of them smile after collecting their packets and walk away, but some take the food without expression. Smile or no smile, Vadakkekara blesses everyone, touching their head or shoulder. She hugs the women.

"Earlier, I felt so bad to touch such persons, as they are so filthy," Vadakkekara admits. "But now I see the face of Jesus in everyone. Wouldn't I embrace him if Jesus comes in this form before me?"

The nun, a medical nurse, has been working in a private hospital for 37 years. "But this work has transformed me and brought me closer to Jesus. I can't explain the happiness and satisfaction I have now," she says. If needed, the sister will bandage a wound but normally does not have time to offer medical help to people on the roadside.

Her day starts 3 a.m. "I spend my first two and a half hours in private prayer and then join the community prayers and Eucharist," she says. "Prayer is the rock on which I stand."

At 7 a.m., she is at Tata Hospital in Mithapur, where she visits her patients and inquires about their well-being before the doctor on duty makes his rounds.

She works in the hospital until 11 a.m. and then returns to the convent to embark on her meal distribution mission, which she finishes by 2 p.m.

She later joins the community prayers and spends some time with the elderly people in the neighborhood. She returns to the hospital at 4 p.m. to work until 7 p.m.

Rana Siruka, a local civic official who is the youngest brother of the driver, says Vadakkekara is "a great blessing to all of us." Rana, a member of the pro-Hindu Bharatiya Janata Party ("Indian People's Party"), occasionally joins the nun for meal distribution.

Rana's party, which heads both the federal and the Gujarat state governments, is blamed for attacks on Christian missionaries and church institutions in various parts of India. However, he bears no ill will toward Vadakkekara.

"She has taught us God's love with her dedication to the abandoned mentally ill people for whom nobody bothers," Rana Siruka told GSR.

He says he had never thought feeding such people was his duty until he met the Catholic nun. "Since they are driven out of society and are unable to speak their minds, they starve. The sister has opened our eyes to the reality," he adds.

Asked what prompted her to start the unique mission, Vadakkekara explains with a smile: "A former parish priest, Fr. Titus Mandy, on his way back from a Sunday Mass at a nearby parish, found a mentally ill person eating cow dung. It moved him."

The priest then shared the experience with Vadakkekara and other nuns and expressed his desire to do something for those people. "He sought our help and I volunteered," Vadakkekara recalls.

She started the ministry on Christmas Day in 2010. "Since then, it has been going on without break," she says.

Sr. Helen D'Souza, the superior of the convent who is also part of the mission, says they get help from local people, including political leaders, to meet the expenses. "The people have embraced this work as theirs," she said. "When it was started I was not in favor of it, but now I really feel happy about it."

Vadakkekara has faced no trouble so far, but other sisters in the ministry have on occasion.

"Once when I went to distribute food, a young boy took the food happily but threw it away in front of us. We felt frightened and bad," says Sr. Ida Fernandez.

Sr. Mary Sebastian, another St. Ann nun, recalls a woman throwing stones at them. "We left the food for her there and left immediately. Luckily, we were not hurt," she says.

Fr. Vinod Karumalikal, a local pastor, says that people with mental illness require special care, "but their family members just throw them out on the roads."

The priest, who sometimes joins the nun in the food distribution, says many families take those with mental illnesses by train to the last station on the India-Pakistan border and dump them there, in a safer area on the seaside. "Even though the church started a shelter home for the mentally ill, it did not succeed as they never stayed in it and the idea was abandoned," he adds.

"The sisters are doing a ministry to the least," he says.

He is pleased that the sisters get "so much public support that we don't need to buy vegetables, rice and other materials for cooking."

Himmant Bhai, a wholesale dealer of onions and potatoes, says he is ready to sponsor anything for Vadakkekara. Bhai offers her as many free onions and potatoes as she wants. "Even at midnight, if I get a call from the nun, I open my shop," he told GSR. "If there is a shortage in my shop, I purchase the items from another shop for them."

He says he and traders help the nun because they know she is doing a noble job that they cannot do. "Any shop in the town is ready to help her, as people are convinced about her commitment to the cause," Bhai adds.

Vadakkekara says the shop owners are "so good to me that they ask me to pick as much of the vegetables as I want."

Dev Bhai, a retired private company employee who is now engaged in watch repairing, says he prays to God to grant Vadakkekara long life so that she could help more destitute people. "She serves those who need help the most," he said. Many like him say that only Christians can do this kind of work.

Among the sister's admirers is Bishop José Chittooparambil of Rajkot. "This is the real meaning of evangelization," the Carmelites of Mary Immaculate prelate told GSR. Feeding these people with mental illness "has much more witnessing value than preaching," he says.

But he notes that preaching the Gospel has become increasingly difficult in India. "The St. Ann nuns are a model for the Catholic Church to emulate across the country," he asserts, saying such examples could help people of other religions understand what Christianity stands for. 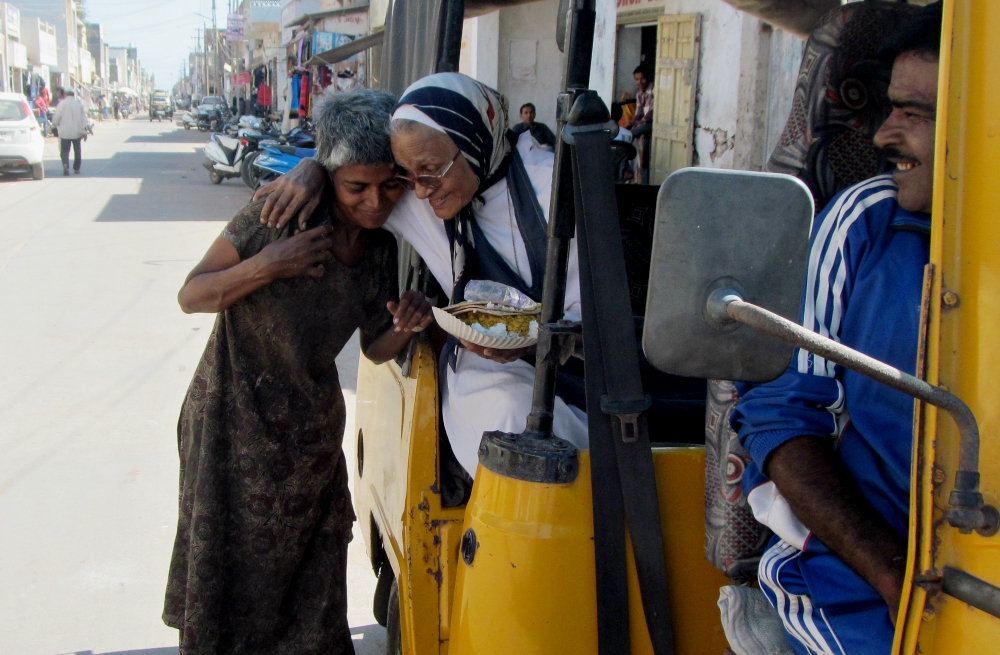 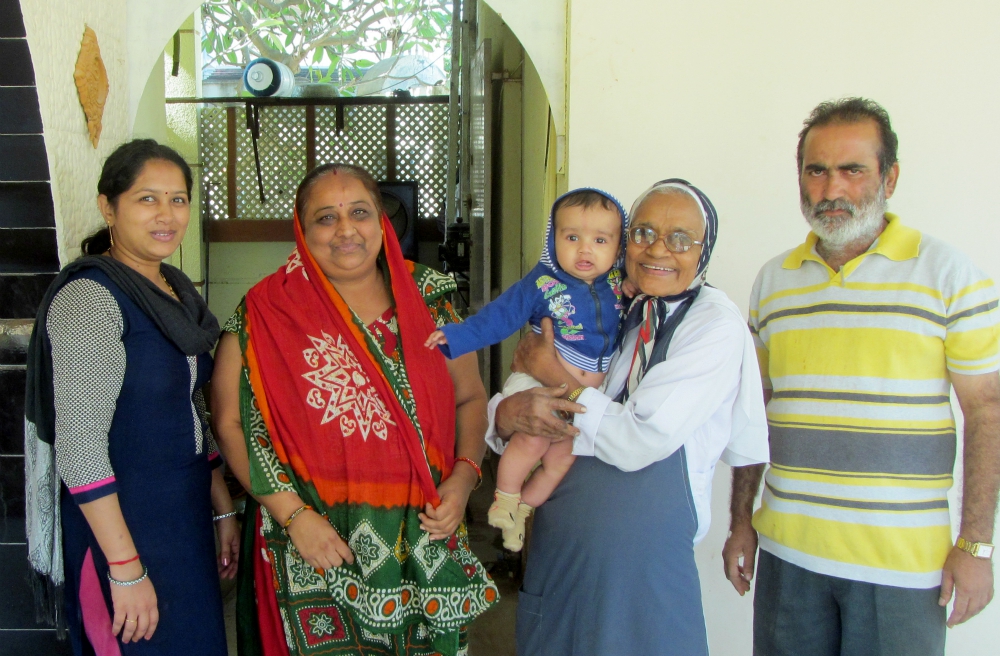 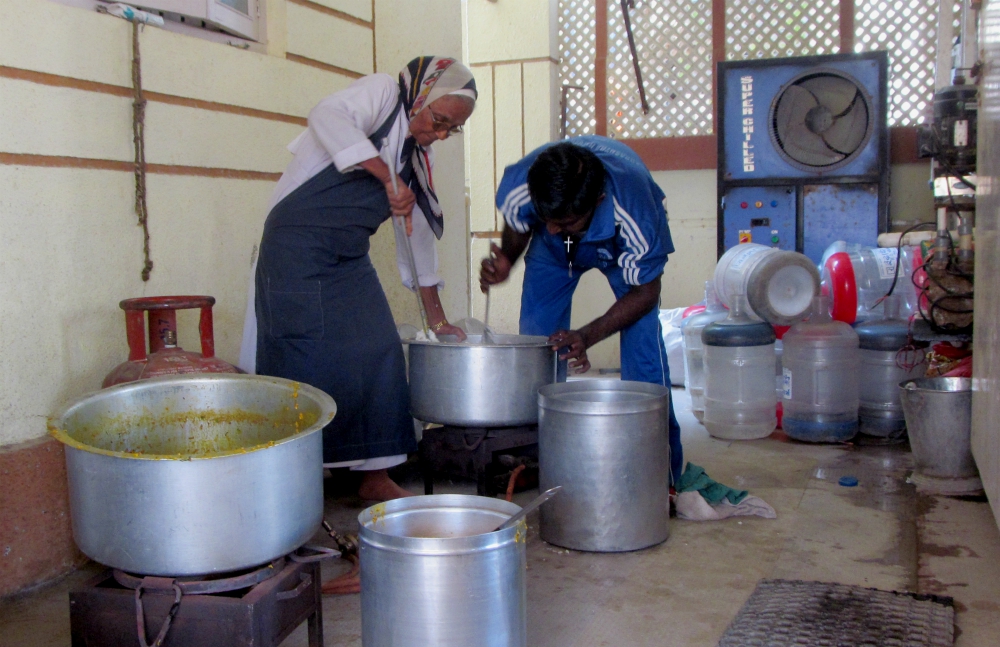 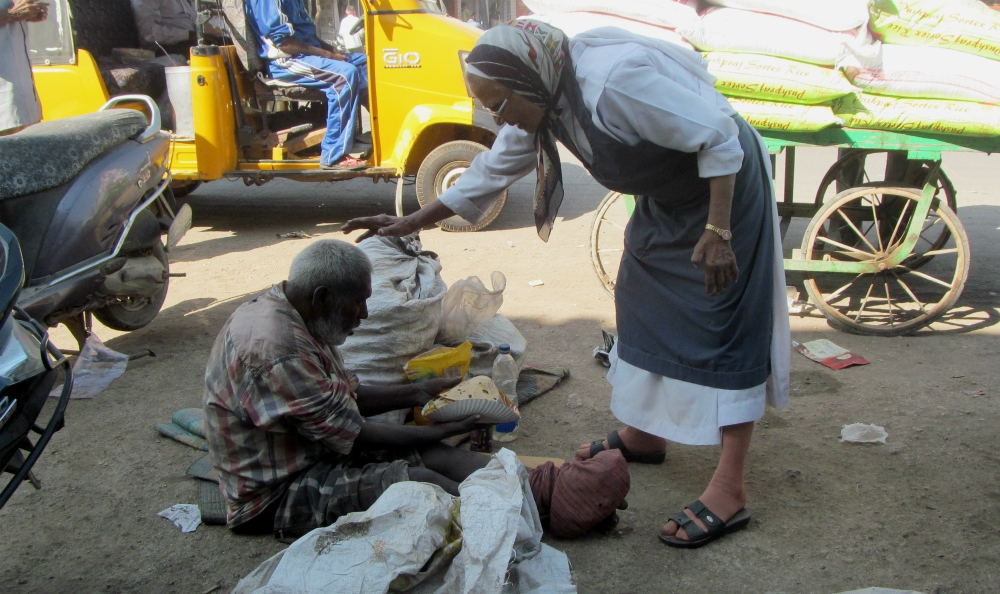 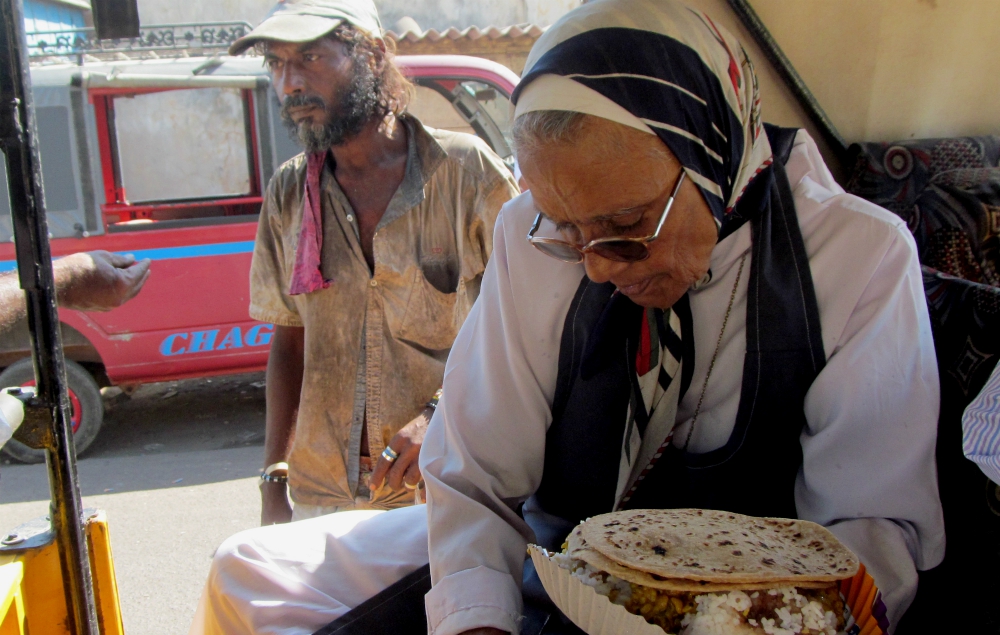 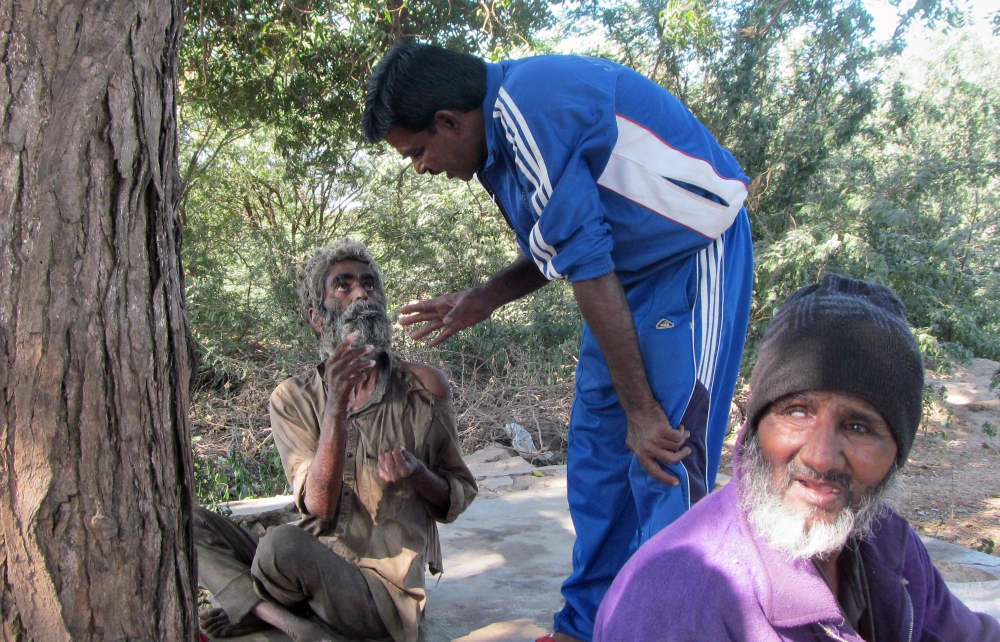 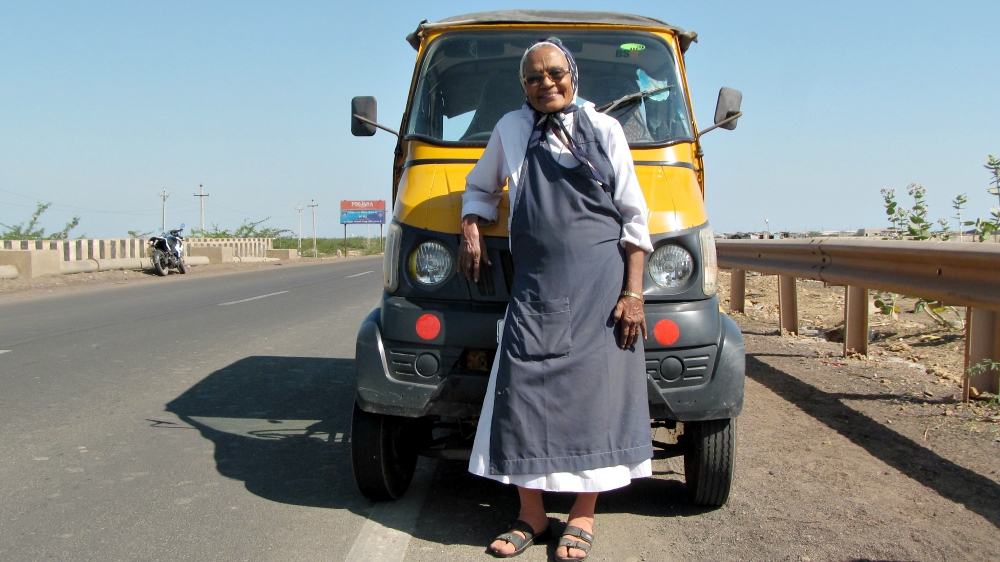