by Melanie Lidman
Ministry
This article appears in the Nepal feature series. View the full series. 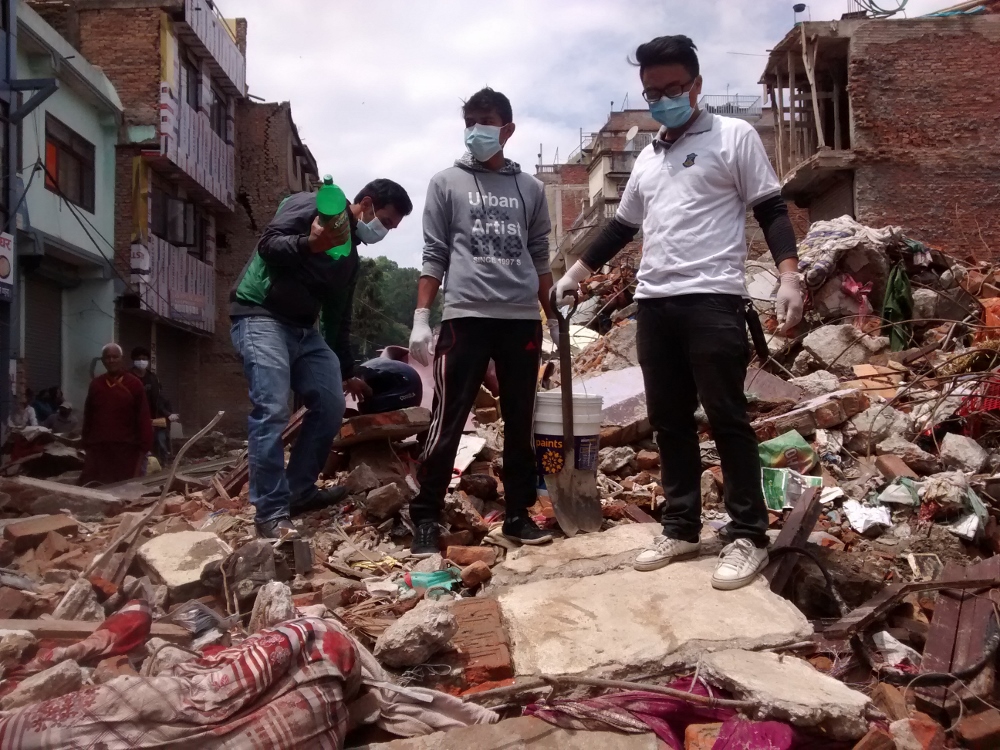 Students from St. Xavier’s College are out volunteering in the Kathmandu Valley with rubble removal and talking about sanitation and hygiene with people forced to live in tents (Photo courtesy of Nepal Jesuit Society)

Kathmandu, Nepal — Good Shepherd Sr. Taskila Nicholas was one of the people in Nepal who did not feel the 7.8-magnitude earthquake that rocked the country April 25. She was on a bus from Pokhara to Kathmandu to inaugurate her congregation’s newest satellite community.

“We didn’t feel anything because we were on a big bus,” she told Global Sisters Report in Kathmandu on Tuesday. “People started calling passengers on the bus to ask ‘are you alive?’ That’s how we heard about the earthquake.” She was only about 100 kilometers from the epicenter.

The bus pulled over, and people began to notice clouds of dust and debris coming down to a river. But from the road, the passengers couldn’t see any destruction. So they continued on their way to Dhading, the last big city before Kathmandu.

“As we got into Dhading we could see that things had fallen, that schools and buildings had come down,” Nicholas recalled. “We didn’t really understand how big it was. But then we saw people crying, and bodies laid out in the road waiting to be taken to the hospital. They were bleeding and had broken bones.”

“This was a spiritual experience for me, I understood that God really wanted me to serve the people in Kathmandu,” said Nicholas, who loved living in Pokhara and was nervous about the move. “It really was a miracle. The road from Pokhara to Kathmandu is a mountain on one side and a river on the other. Who knows what could have happened . . . but Jesus said, ‘Even if you walk in the dark valley, I am with you.’ I really felt Jesus was driving the vehicle.” 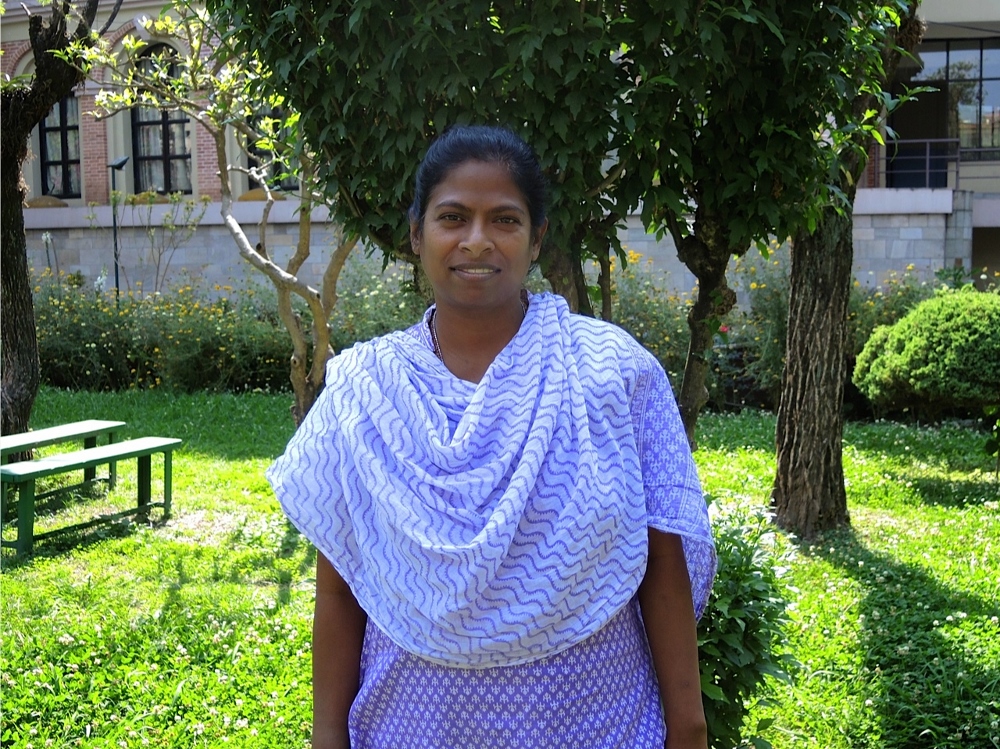 Good Shepherd Sr. Taskila Nicholas, originally from Sri Lanka, is the leader of the new community in Kathmandu, which was set to be inaugurated on April 28. (Melanie Lidman)

Somehow, the bus made it to Kathmandu that evening, where the sisters joined the Jesuits, who had offered them a temporary home. “That first night, we didn’t know if we were safe or not; we just slept in the hands of God,” she said.

Two days after the earthquake, when Nicholas was traveling with the Catholic aid group Caritas and saw a tar road completely split in two, she realized how lucky she was to have been on the bus. People told her that some smaller vehicles were thrown in the air by the force of the earthquake.

Before the earthquake, two Good Shepherd Sisters had planned to work in Kathmandu at St. Xavier’s Jesuit high school and with girls at risk of being trafficked. But because of the earthquake, Nicholas has decided to shift the mission to relief and rehabilitation. Good Shepherd Sr. Lucy George is overseeing a mobile medical clinic, which is traveling around the hard-hit Gorkha region, west of Kathmandu. The sisters will still target women and children, some of the most vulnerable groups, especially through counseling and psycho-social services.

“Even though people lost their dear ones, they had no time to mourn, they had to look after the survivors,” Nicholas said. “One day they’ll have to let out all this sadness.”

The Good Shepherd Sisters are coordinating with the Salesian brothers and sisters, Caritas, the Sisters of the Congregation of Jesus, and the Nepal Jesuit Society, among others, for a unified Catholic response to the earthquake.

The Nepal Jesuit Society is overseeing the Catholic campaign. Fr. Augustine Thomas, the principal of St. Xavier’s College, was in his office when the earthquake struck at noon Saturday. One floor above, 500 students were taking exams.

“I ran outside and stood looking at the building and was just thinking, ‘God, make it stop! Please God make it stop!’” Thomas said Tuesday. “But it lasted for half a minute. The students were amazing – they calmly went under their desks, and there were not even any tears.”

Less than two days later, the students started organizing to volunteer. There are about 3,000 students at St. Xavier’s College, which includes grades 11 and 12, exam preparation and undergraduate and masters’ degree programs. All were safe, so they wanted to reach out to their villages, which had suffered so much.

Students from all 75 districts in Nepal attend the school. St. Xavier’s harnessed those connections to determine how to distribute aid. They dispatched students from closer villages to go home and report back about what their communities needed. Students from more far-flung places made contact with their families by phone, checking how many tents were needed.

While the students were making lists, Thomas and the staff of St. Xavier’s started mobilizing their contacts in northern India, to drive supplies to the border with Nepal. 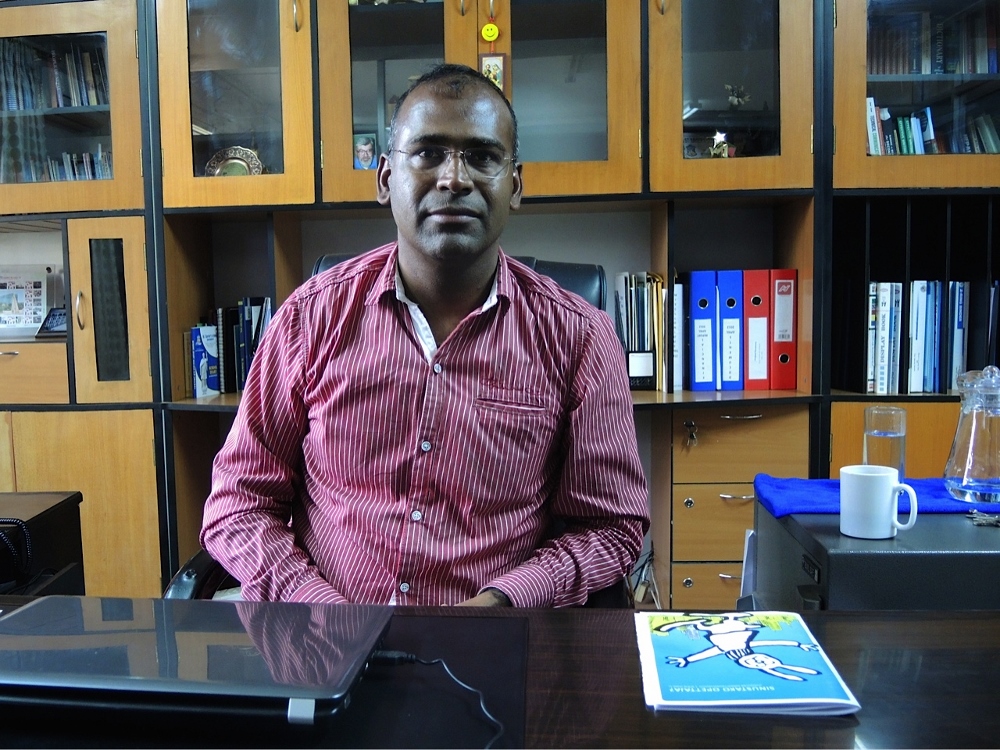 Jesuit Fr. Augustine Thomas is the principal of St. Xavier’s College. His 3,000-some students have organized to send relief supplies to six districts of the country. (Melanie Lidman)

The Nepali government has frozen some of the border crossings while demanding up to a 30 percent tax on relief goods, but the Jesuits were able to take advantage of their connections to get their relief materials through the border despite the difficulties, said Thomas.

Up until Tuesday, Catholic responders had delivered tents to 3,000 families and food to 4,000 families. They are now working in six districts because of a tent shortage, but eventually hope to expand to all districts across Nepal where help is needed. They also have two buses that leave every morning for different parts of the Kathmandu Valley to clear debris and talk to villagers living in tents about the importance of sanitation and clean drinking water. The prevalence of dead bodies, both human and animal, raises major concerns about an epidemic outbreak of diseases like cholera.

In addition to shortages of supplies like tents, aid groups are also facing a major challenge from the Nepali government, which has demanded that all aid money be transferred to the Prime Minister’s Disaster Relief Fund. This has raised questions about the transparency of that fund and drawn harsh criticism from international aid groups.

For now, Catholic groups are working continuously, hoping the bureaucratic issues will resolve themselves. Amidst the devastation, there are also moments of beauty.

Nicholas smiles when she thinks of the village of Pokharatar, in the region of Gorkha. The tiny hamlet, an eight-hour hike from the nearest road, has 85 families divided into two main geographic groups. Almost every house was destroyed. 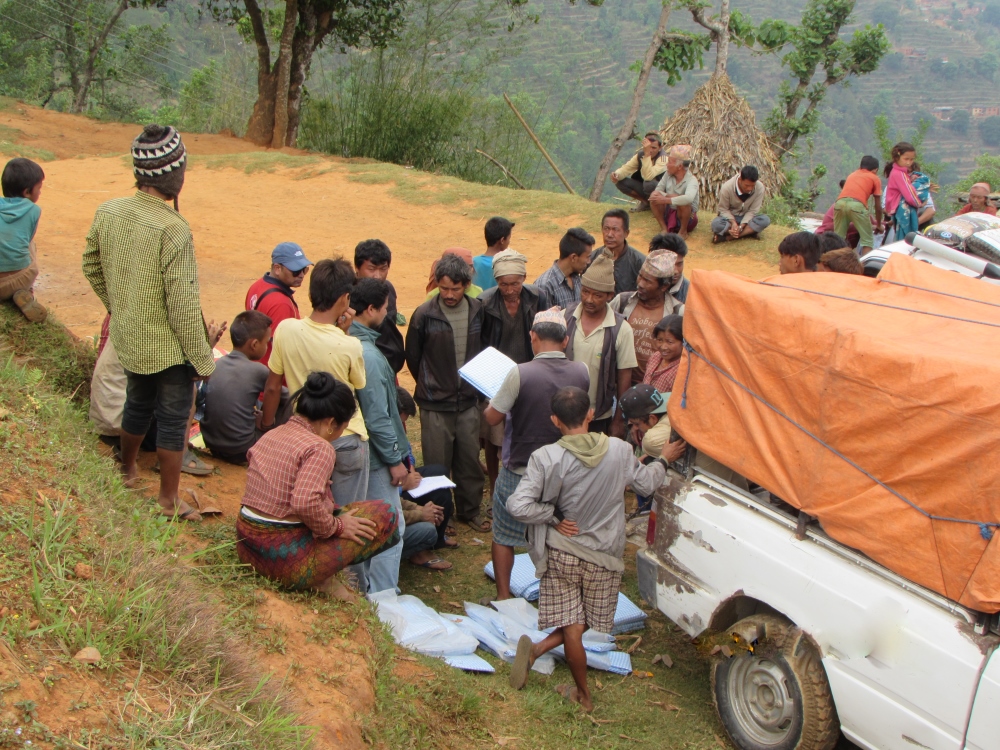 People associated with St. Xavier’s College distribute tarps for tents in the Kathmandu Valley, as lack of shelter is a major issue. (Photo courtesy of Nepal Jesuit Society)

Since the earthquake, people have been cooking together in two groups, making sure that everyone has enough to eat. When many people in rural areas are focused simply on survival, the communal spirit of Pokharatar touched Nicholas’s heart.

Thomas’s favorite story is from the ordination of the first Jesuit priest, which took place in the village of Okhaldunga in the Dhading district. The ordination was on the morning of the earthquake. At 11:56 a.m., the entire community had gathered for a celebratory meal and cultural program in the field in the center of the village. When the earthquake struck, everyone was already outside.

At first, the priests worried that the villagers, none of whom are Catholic (the new priest is a convert to Catholicism) would blame Catholics for the catastrophe or take it as a celestial sign that the conversion or ordination was wrong. Instead, the village has celebrated their new priest, realizing that the timing of the ordination saved them from being inside their homes during the quake.

“The positive mentality here was very unique,” Thomas said. “Those who were fine were reaching out to those who were not fine. In the village, there’s still hope. No one is sitting back and weeping – there is still tremendous hope. This gives me a positive feeling.”

“There was something very unique about this nation after the earthquake,” Thomas added. “It doesn’t matter whether you are rich or you are poor – everyone was sleeping in the street.” 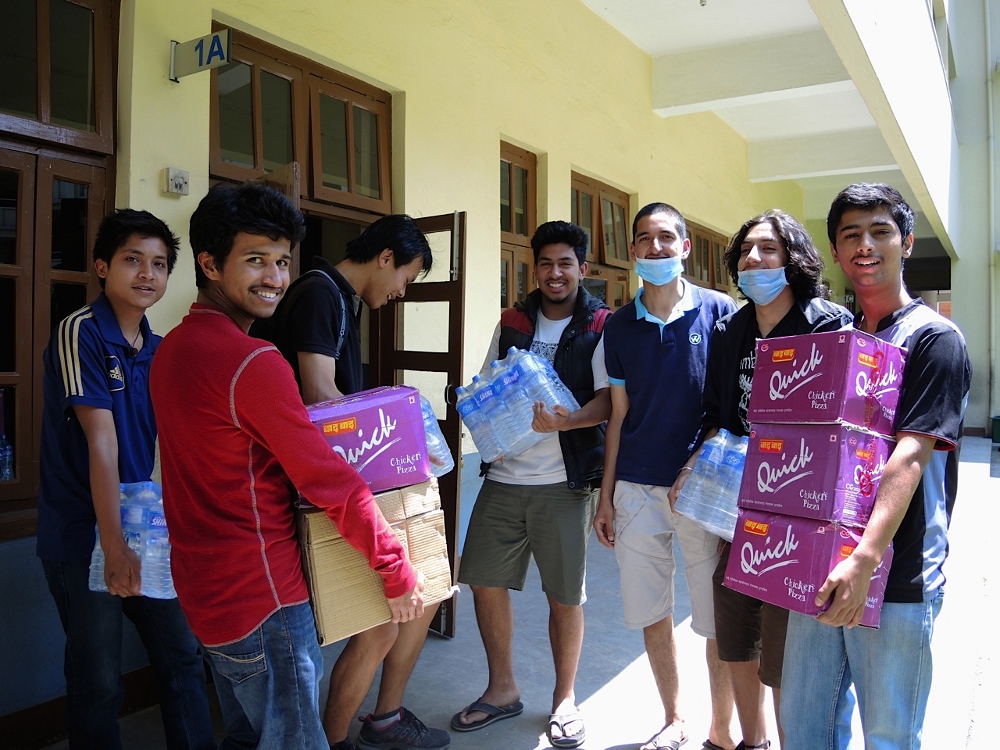 Students from the St Xavier’s high school collect water for a rural village in honor of their classmate, Kevin, who was killed in the April 25 earthquake. (Melanie Lidman)

There are only 10,000 Catholics in Nepal. The vast majority of the men and women religious come from India, with a few from Korea and Europe. The Catholic groups offer aid to people regardless of religion, Nicholas said.

What also touched Nicholas is the concern from people around the world, including other Good Shepherd congregations and strangers. “Now with the media, the world has gotten smaller,” she said. “Because of social awareness and coverage, people wanted to help.”

The past 10 days whirled with adrenaline, heartbreak, hope and devastation. If there is one bit of advice Nicholas would give to other sisters around the world, it’s to start making an emergency disaster plan before it’s needed.

“International congregations should have a disaster management committee that is well organized and can come to the aid [of communities in need],” Nicholas said. “It could be a network of congregations, or both men and women religious. But you should make a contact list of experts who can come and help as soon as possible.”

Nicholas herself, who was born in Sri Lanka, has worked in many disaster situations, including the tsunami in 2004 and an earthquake in Gujarat, India, in 2001. “I have been in so many disasters, but everything is always different,” she said.

There is one thing that stays the same, though. “People live with hope,” she said. “They say, ‘at least we survived.’”

Ministry | In Nepal, Catholics reach out to remote areas devastated by quake

Why I read literature