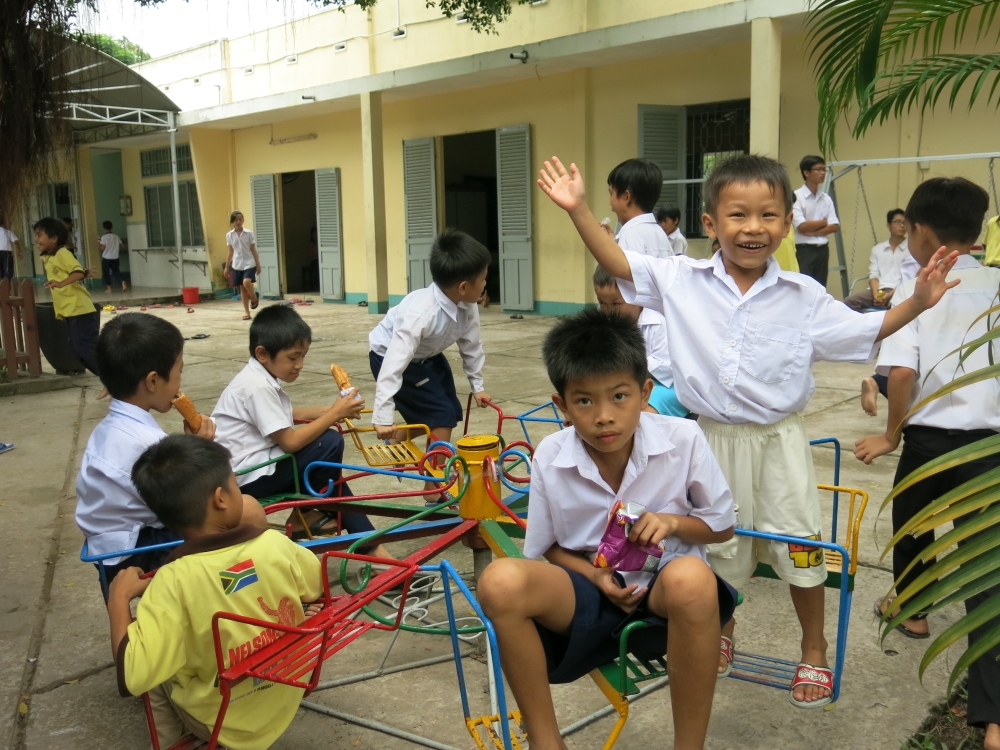 Children of migrant workers who are students at Sacred Heart Love School play games outside during recess. (Joachim Pham)

Ho Chi Minh City, Vietnam — While most schools in Vietnam were enjoying their summer holidays, Our Lady of the Mission Nuns kept their Sacred Heart Love School open for the 120 children of migrant workers who live on the outskirts of Ho Chi Minh City, the largest city in Vietnam.

The children aged 6 to 14 are in first through fifth grade. They study hard and play noisy traditional games with one another after classes just as if they were at a public school.

Hao said in the past educational officials had caused problems for the school and pushed it to seek permission from the government to operate. All educational activities, including charitable ones, are supposed be approved by the government.

“I told them that the government only allows religions to run kindergartens and that principals of elementary schools are required to be communist party members. So I know that I am never going to get permission to establish an elementary school,” she said.

After the Vietnam War ended in 1975, the Catholic church’s schools, hospitals and other facilities were confiscated by the government. Although the government allows private schools run by individuals and even foreigners, all religious groups are banned from providing education and health care services.

“We told officials that, ‘If you do not allow us to provide education for these children, you should bring them to public schools. We have a lot of other work to do.’ And then they have ignored our school for the past two years,” she told GSR while lying in bed with a broken left leg from bike accident in July.

Hao, 72, said her school’s aim is to cooperate with the government to alleviate illiteracy among children from poor families in the city’s district of Cu Chi. 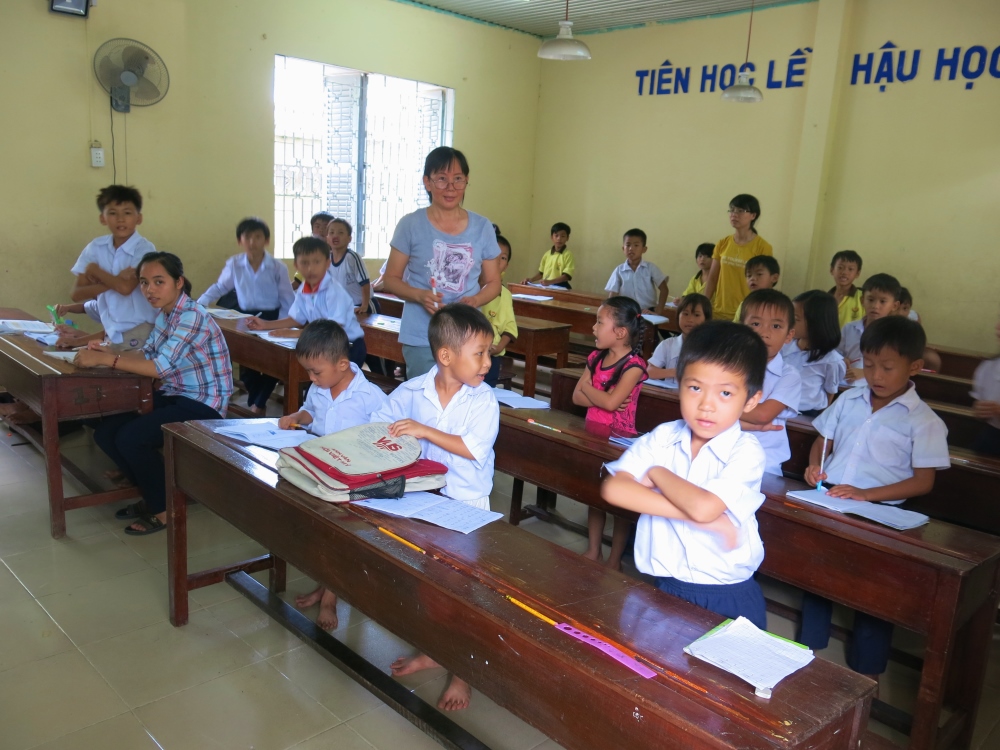 She said the school offers education programs like public schools do, and also gives the children free clothes, food, books, pens and shoes so that they can continue their studies.

The nun said she started to give education courses to 20 to 30 illiterate children five years ago at her convent, and currently 120 children attend such courses. Last year 158 children, including some 18-year-olds, took classes at the school.

Most children in Cu Chi have no birth certificates or are too old to enter state schools when they are brought here by their parents. Others have to do manual jobs to support their families. Many teenagers come to enroll in the nuns’ school because their friends tease them about their illiteracy.

She noted that children coming with domestic migrant workers or from Cambodia will leave her school when their families move to other places for jobs. Their parents also are illiterate and have no marriage certificates or household registration.

The nun explained that it is important to keep children studying continuously during summer holidays.

“If not, they will follow their parents to work far away and drop out of school.” In addition, she wants to create work for six teachers who only receive a monthly allowance of two million dong (U.S. $95). 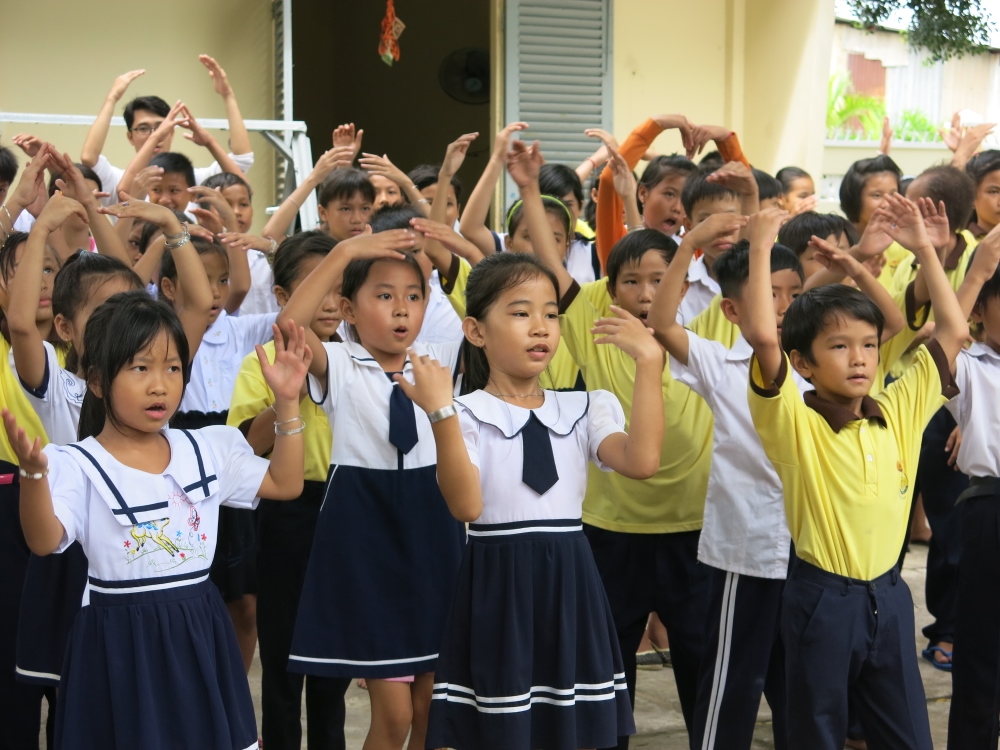 Sr. Pham Thi Nhuong said students are at the school in the morning Monday through Friday. After some children started showing up faint with hunger, the sisters started providing meals with milk on Wednesdays and Thursdays. Many of the students go sell lottery tickets after classes.

The nun said six students will enroll in grade six at public schools this academic year, which started in September.

“Only some students continue studying further at public schools because they are deeply ashamed of their age, and others have to work to support their families – although they study well at public schools,” she added.

Chanh Thoan, 13, was in grade one for two years. “I had never gone to school until I entered this school, so I find it difficult learning how to sing songs, read and write,” he said while he was playing a ball game with other students.

He was practicing how to write so that he could start second grade this month. Normal children his age are in eighth grade.

Thoan, who looks thin and smaller than others his age, said he and his older sister, who is in grade three at the school, earn 100,000 dong by selling lottery tickets after their classes. Their father and two older sisters work for factories in another province, while their mother sells coffee on the street and looks after their youngest brother. They live in a rented house that costs 3 million dong a month.

He said his family moved to the area from Boeung Tonle Sap (Great Lake) in Cambodia. 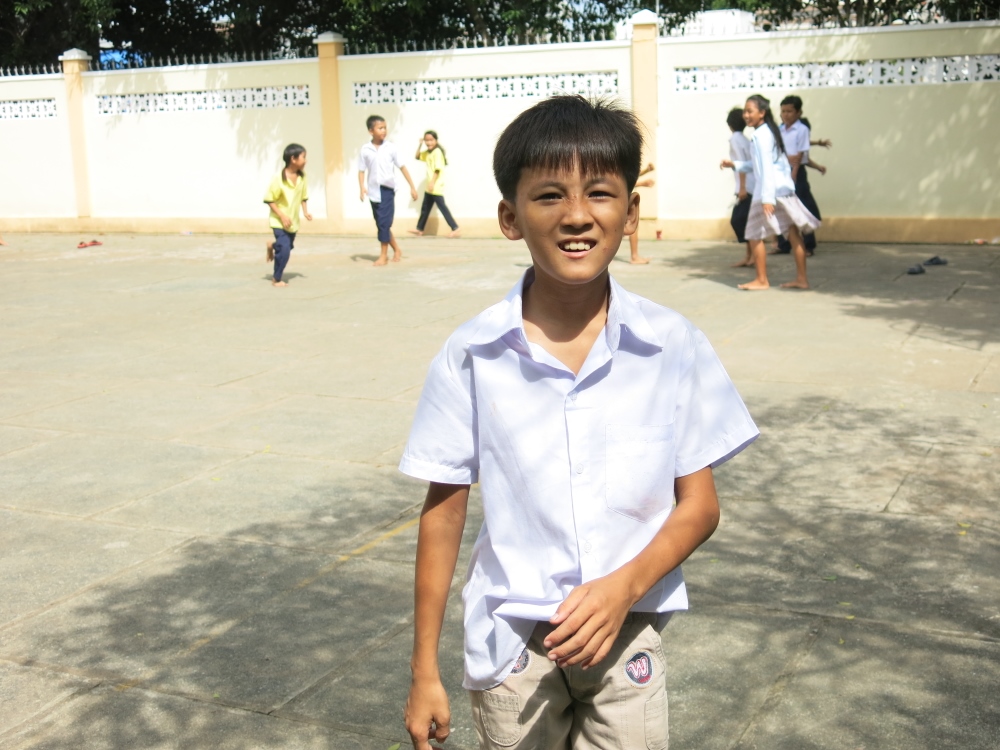 Another student, Huynh Thanh Hanh Son, 14, a fifth grader, said he has studied at the school for four years and plans to move to a public school next month. He and five others were reviewing their English under a tree in the school yard, since the school rooms were full.

“We try our best to learn English well so as to keep pace with other sixth graders,” said Son, who lives with his grandmother while his parents work in Cambodia.

[Joachim Pham is a Global Sisters Report and National Catholic Reporter correspondent based in Vietnam.]

I carried a cross in solidarity, sorrow and thankfulness