Catholic sisters and other peace activists who have worked decades to end the nuclear threat lauded an agreement reached July 7 by 122 countries at the United Nations that outlaws nuclear weapons.

For longtime activists like Srs. Carol Gilbert and Ardeth Platte, Dominican Sisters of Grand Rapids, Michigan, the agreement — which nuclear states like the United States have said they "do not intend to sign" — is a milestone in activists' long, committed, vigilant but often lonely efforts.

They and other veteran activists were jubilant after the vote of participating nations at U.N. headquarters in New York, though they were quick to add that the vote has to be seen as another step, though a crucial one, in a long journey by those who want to get rid of the weapons that threaten humanity and the planet.

"I am going to spend the rest of my life to get the U.S. on board this treaty," Platte, 81, told GSR in an interview at U.N. headquarters shortly after the vote, the culmination of several sets of meetings that began earlier this year.

No nuclear powers participated in the drafting of the treaty and none voted on it. One country, the Netherlands, opposed it, citing NATO commitments, and another, Singapore, abstained. The agreement says the use or threat of using nuclear weapons violates international law, as does the "undertaking to develop, test, produce, manufacture, acquire, possess or stockpile nuclear weapons or other nuclear explosive devices," the U.N. News Service reported.

The agreement will be "open for signature" for all U.N. member states beginning Sept. 2. New York attorney Guy Quinlan, president of the Lawyers Committee on Nuclear Policy who has worked with Catholic sisters on the NGO Committee on Disarmament, Peace and Security, said the agreement is a formal treaty but will only "enter into force" — the technical term in international law — after the 50th nation ratifies it.

Quinlan told GSR that, as a general rule, "treaties are binding only on states which join them, so this one will not bind the U.S., Russia and other nuclear powers at this time."

However, he added, "There is also something called 'customary international law,' consisting of some basic rules which are so universally accepted that they are regarded as binding on all countries, whether they have signed a particular treaty or not."

Quinlan said his organization, among others, believes "that any use of nuclear weapons is unlawful right now, even without a specific treaty, because such use would violate the rules of international humanitarian law, which are universally accepted by all countries, including U.S. and Russia."

Zimbabwe Maryknoll Sr. Elizabeth Zwareva, who works at the Maryknoll Office for Global Concerns at the U.N., bases her opposition to nuclear weapons on religious, ethical, moral and strategic grounds, as well as monetary concerns. She said the world cannot afford to continue manufacturing the weapons at a time when resources need to be spent on environmental and social development initiatives.

Amid the tears of emotion, applause and standing ovations after the vote was taken, those like Zwareva, Gilbert and Platte added they have no illusions about the challenges ahead, particularly given the fact that nuclear powers — including the United States, Russia, the United Kingdom, France and China — boycotted the U.N. meetings.

And immediately after the vote 122-1 vote, three nuclear powers — the United States, the United Kingdom and France — announced in a joint statement that they "do not intend to sign, ratify or ever become party to it."

The three powers said that the agreement "clearly disregards the realities of the [current] international security environment" and that approving "the ban treaty is incompatible with the policy of nuclear deterrence, which has been essential to keeping the peace in Europe and North Asia for over 70 years."

Gilbert said she was not surprised by the American-British-French declaration and said it was evidence that the U.N. initiative had gotten "under the skin" of the nuclear powers.

She predicted that, like grassroots efforts to challenge the Trump administration's decision to exit the U.N.-led international agreement on climate change, public support for nuclear disarmament will mount. Gilbert cited the efforts of California and other states and municipalities opposing the administration on climate change policy as a model for anti-disarmament efforts.

"My government was not here for this treaty, but I will work for support of the treaty," she said.

In a statement after the vote, Kathleen Lawand, who heads the legal division of the arms unit of the Geneva-based International Committee of the Red Cross, noted other challenges but also framed the agreement's practical importance.

"The treaty can and must evoke a profound reflection, and a determined response, by all States," she said. "Although the ban on nuclear weapons will not make them immediately disappear, it reinforces the stigma against their use, supports commitments to nuclear risk reduction, and is a clear disincentive for proliferation — all of which are especially important today with rising regional and international tensions and the consequent increasing risk of use of nuclear weapons."

As for the claims that this is not the right time for such an effort because of mounting tensions between the United States and North Korea, Platte said the current situation, in fact, shows a "nuclear-based policy" by any country "has been a failure."

Maryknoll Sr. Jean Fallon, 87, who marched in pouring rain with fellow Maryknoll sister Zwareva near the United Nations prior to the start of the June 15-July 7 session, told GSR the current tensions between the United States and North Korea are proof "that this is exactly the time we need" the agreement.

"The [nuclear] threat now comes right back at us, the U.S.," she said. "I'm not saying North Korea is not a loose cannon. But there are potentially so many loose cannons in the world because of nuclear weapons. Let's get these bombs off the table." (Like the United States and others, North Korea did not participate in the U.N. conference.)

In an institution that is sometimes said to be run by the major international powers, the degree of support and depth of feeling for the agreement was striking.

When the 122-1 vote was announced, Costa Rica Ambassador Elayne Whyte Gómez, who chaired the conference, wiped back a tear.

"We feel emotional because we are responding to the hopes and dreams of the present and future generations," she said.

Speaking on behalf of U.N. Secretary-General António Guterres, spokesperson Stéphane Dujarric said, "The treaty represents an important step and contribution towards the common aspiration of a world without nuclear weapons."

Izumi Nakamitsu, the U.N.'s high representative for disarmament affairs, said the agreement "should be seen as a beacon of hope for all those who have dedicated their lives to the pursuit of a nuclear-weapon-free world."

Nakamitsu praised those in "civil society," such as faith-based disarmament groups and activists, "whose pioneering efforts and demands for progress have made possible much of what has been achieved today."

She also hailed "the heroic efforts" of the Japanese survivors of the U.S. bombings of Hiroshima and Nagasaki — the hibakusha — "whose unspeakable suffering and tireless endeavors are captured for the first time in a multilateral nuclear disarmament treaty."

Hibakusha activist Setsuko Thurlow, who survived the 1945 bombing of Hiroshima, told the assembly, "I never thought I would see this moment."

Echoing that, anti-nuclear activist Abacca Anjain-Maddison of the Marshall Islands, a country that was the site of 23 nuclear tests by the United States between 1946 and 1958, told the assembly, "It's as if the world has finally heard our cry."

The decision by non-nuclear countries to break with the nuclear powers and negotiate the first multilateral nuclear arms treaty in two decades came because they are frustrated with the current U.N. nonproliferation treaty, which was adopted in 1968, Quinlan said.

The drive for a new treaty came because a majority of countries in the world did not think the nonproliferation treaty was effective, Quinlan said.

Frustration with the nations that possess nuclear weapons spilled out in public view throughout the U.N. meetings. Cmdr. Robert Green, a retired member of the British Royal Navy who now heads the New Zealand-based Disarmament & Security Center with his wife, Kate Dewes, told GSR on July 3 that the current global stalemate over nuclear arms is due to "a nuclear protection racket that is being conducted by U.S.-led organized crime syndicate for the benefit of the military industrial complex, using nuclear deterrence dogma as a counterfeit currency of power. This treaty is going to break through that. We have rumbled them. We are going to go ahead and do this."

Other frustrations also were on display. Following the vote, South African Ambassador Nozipho Mxakato-Diseko spoke of the pressure put on African nations not to participate in the conference, much less to vote as they did. But in the end, a sense of moral duty prevailed, she said. To have voted against the treaty, Mxakato-Diseko told the assembly, "would have been a slap in the face to the victims of Nagasaki and Hiroshima."

Zwareva said she and others know the challenges ahead are considerable. Zwareva spoke to an ambassador of one African country voting for the agreement who told her, "It's just a piece of paper."

She challenged the diplomat, reminding him that, assuming 50 countries sign the treaty, it becomes "a legal instrument."

"We're focusing on the hope now," she said about the eventual end of nuclear weapons. "We have to be hopeful — but we need to mobilize now."

Beth Blissman, the U.N. representative for the Loretto Community, agreed, telling GSR, "This is the time for educating and to continue activism in a nonviolent way."

She said faith communities, including members of Catholic religious congregations, now have an opportunity "to educate people from the pulpit, at the grassroots and in prayer."

*This post has been edited to clarify a photo caption. 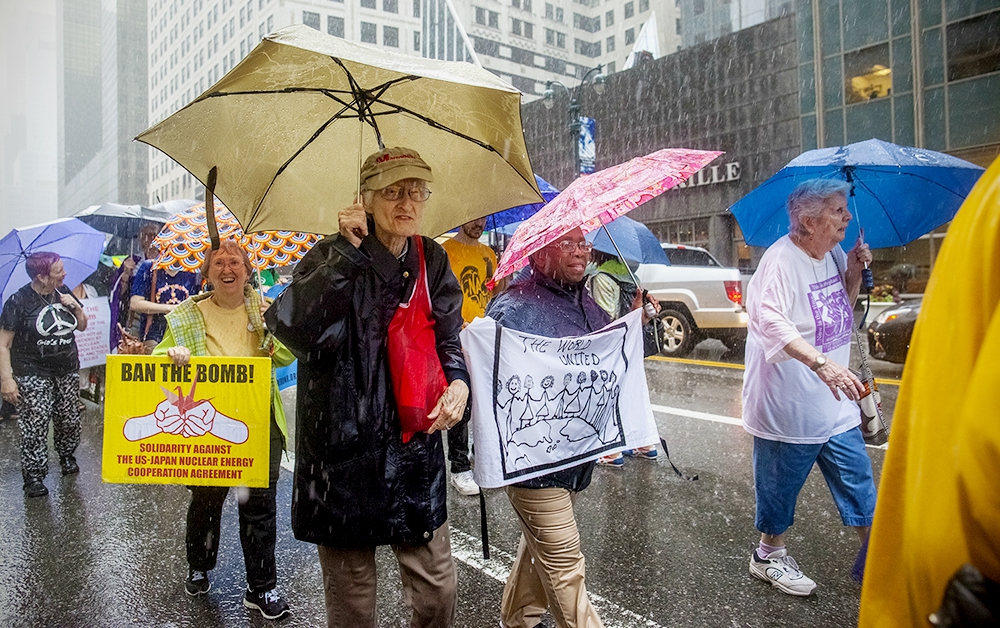 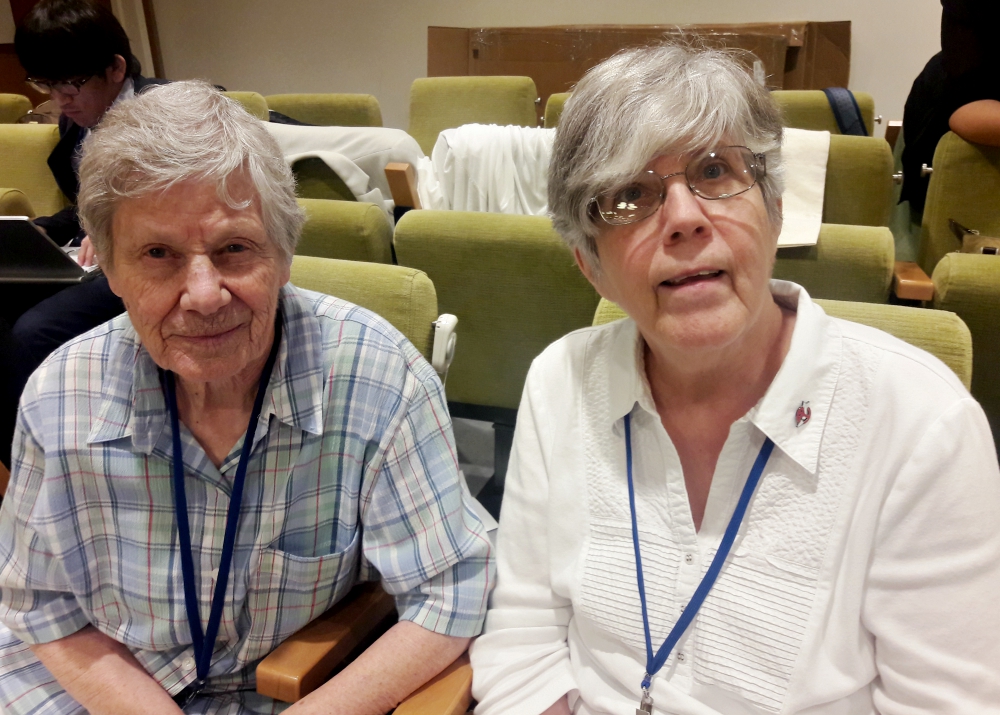 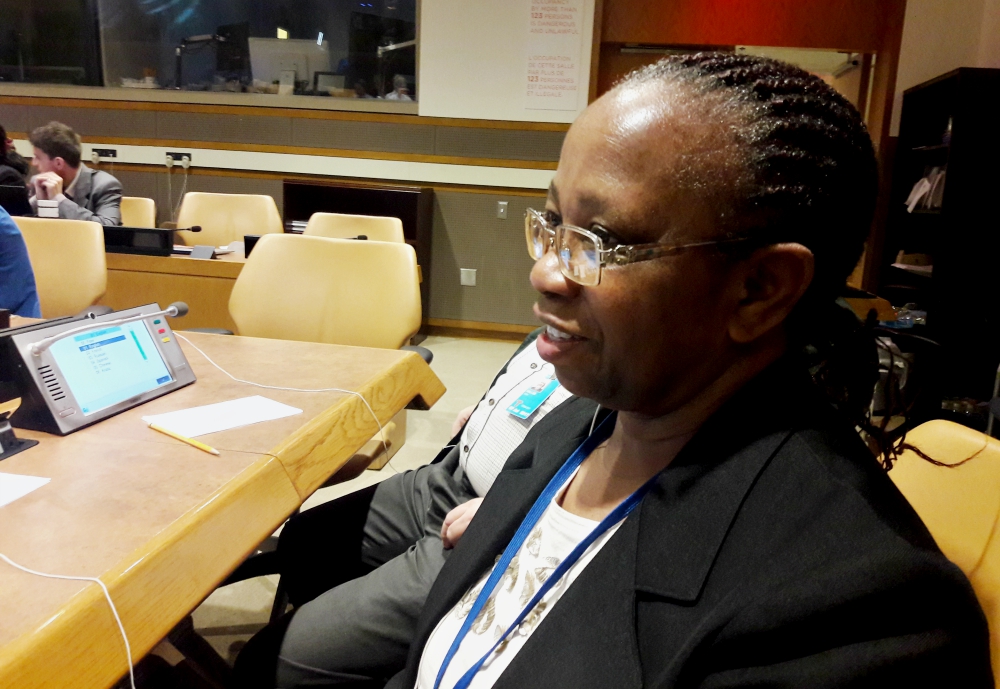 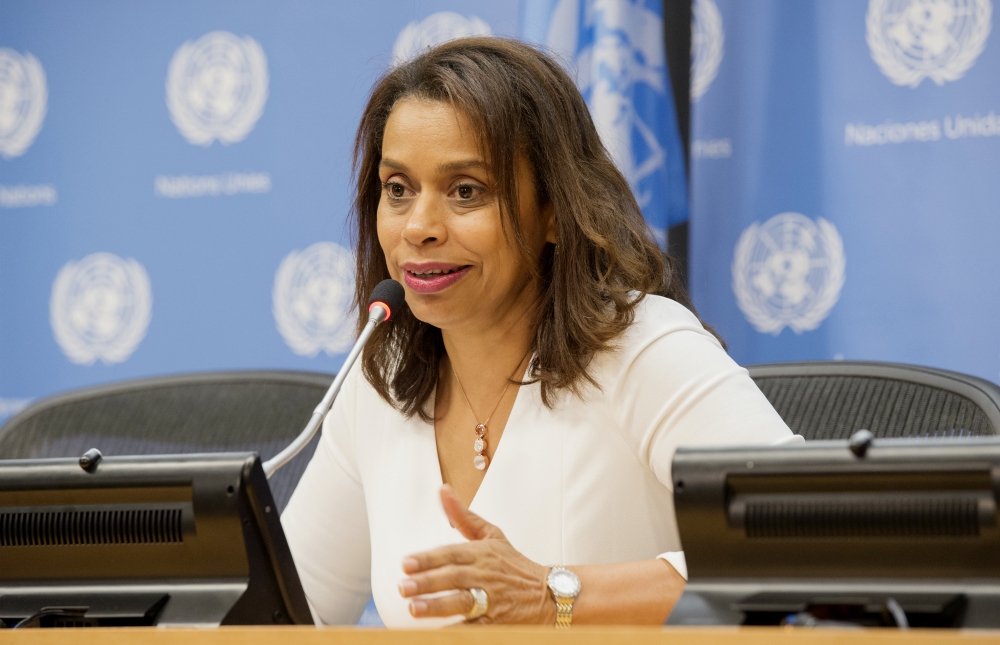 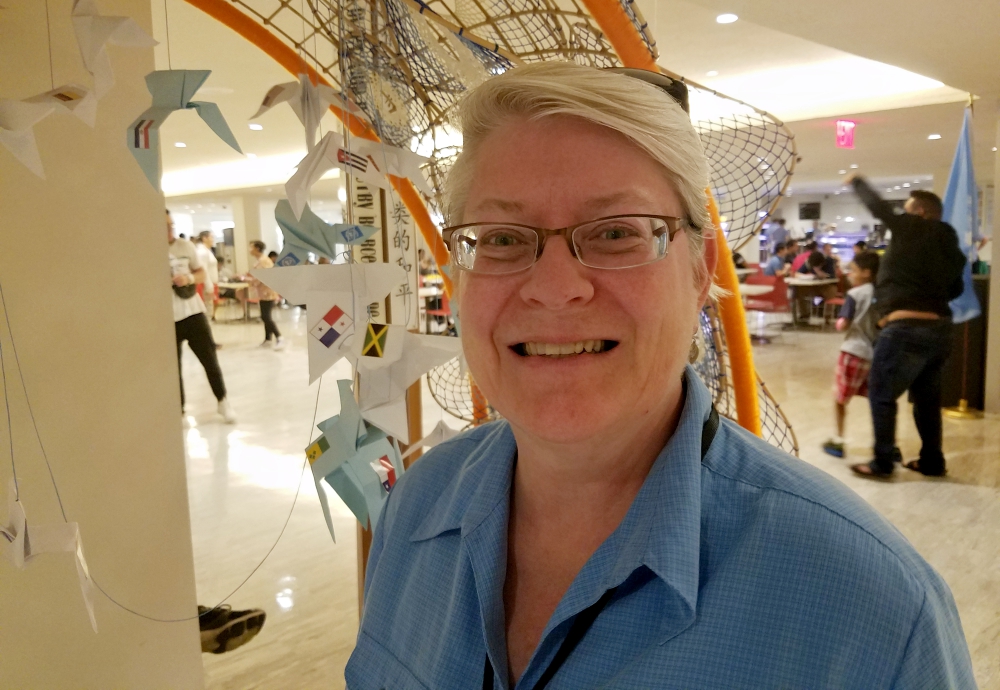