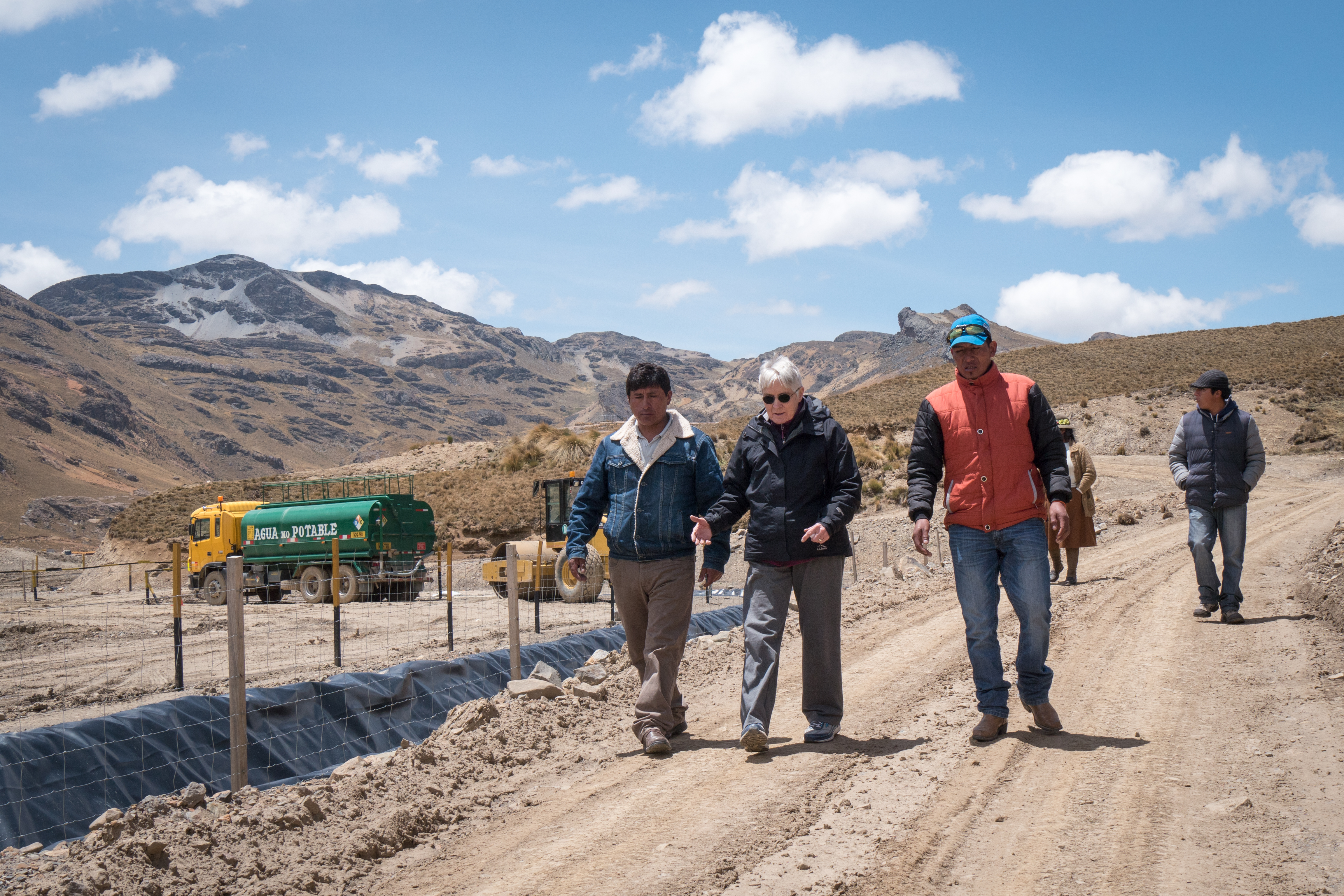 In this 2016 file photo, Maryknoll Sister Pat Ryan walks with members of her environmental team near a contaminated marsh in Condoraque, Peru. Human Rights and Environment, or DHUMA, an organization she helped found, is the recipient of the 2018 Letelier-Moffitt human rights award for its work with indigenous farmers in the Peruvian Andes. (CNS/courtesy Maryknoll Magazine)

A human rights organization co-founded by a Maryknoll sister has won the Letelier-Moffitt human rights award for its work with indigenous farmers high in the Andes Mountains of Peru.

The organization, Human Rights and Environment, based in Puno and known by its Spanish initials as DHUMA, teaches people to defend their rights under Peruvian and international law and provides legal defense in cases of rights violations, according to Maryknoll Sister Patricia Ryan, 71, who grew up on Long Island, New York.

DHUMA, founded in 2007 by Ryan and others who formerly worked in the human rights office of the Catholic Prelature of Juli in Peru's Puno region, recently won a landmark ruling that indigenous communities must be consulted before the government can grant mining concessions on their lands.

Quechua and Aymara communities on the windswept, two-mile high plain and hills around Lake Titicaca generally "are not taken into consideration on issues that affect their rights or territory," Ryan told Catholic News Service.

The area has many mining concessions that overlap lands where indigenous families have lived for generations, raising sheep, llamas and alpacas, as well as crops such as potatoes and quinoa. Some mining concessions cover several hundred square miles.

Peruvian law and international treaties require that indigenous people be consulted about projects that would affect their communal rights, such as the right to territory. But the concessions were granted without consultation, Ryan said.

"When people know that these are their rights, and that rights are not negotiable, they can speak to power," she says. "We help people empower themselves to know their rights and the rights of Mother Earth, which are one and the same, because their relationship with the earth is so intimate."

Two of the group's early cases are awaiting decisions from Peru's Constitutional Tribunal in Lima. A third, involving about a dozen communities, became a landmark in late 2016 when an appeals court ruled that the government must consult indigenous communities before granting mining concessions that affect their lands. In the past, consultation was required only when the company was ready to begin production.

Last year, a court ordered the government to cancel 13 mining concessions because the affected communities had not been consulted about them. The judge in that case had ruled against communities earlier in similar cases. Ryan attributes the change in attitude to training DHUMA has provided to judges and prosecutors on laws and international treaties that protect communities' rights.

The organization is also providing legal aid to five people who face charges for leading a massive protest against a controversial mining project in 2011.

"The criminalization of protest has become a massive weapon of the state against people who are just trying to be heard," Ryan said.

Puno is one of the regions of Peru with the most conflicts over environmental issues related to mining concessions and industrial pollution that has contaminated pastures, rivers and streams.

"This path we are opening up with the people offers a nonviolent way to address conflicts," Ryan said. "The best-kept secret has been these kinds of legal tools that help people."

The government "could get rid of all the conflicts in the country if they only respected the rights of the people," she added.

The Letelier-Moffitt award is sponsored by the Washington, D.C.-based Institute for Policy Studies. It is named for former Chilean diplomat Orlando Letelier and his assistant, Ronni Karpen Moffitt, who worked at the organization and who were murdered in Washington in 1976 by a car bomb rigged by agents of the Chilean dictatorship.

The award, which will be presented at a ceremony in October, has special significance for Ryan because in 1981 it went to her congregation, the Maryknoll Sisters of St. Dominic. That honor came a year after two Maryknoll sisters, Ita Ford and Maura Clark, were murdered by government forces in El Salvador, along with Ursuline Sister Dorothy Kazel and lay missionary Jean Donovan.

The Institute for Policy Studies said DHUMA was chosen this year because of its "promotion of indigenous culture, autonomy and self-determination."

A model for Catholic urban education

A place of imperfections, beauty and inextinguishable joy