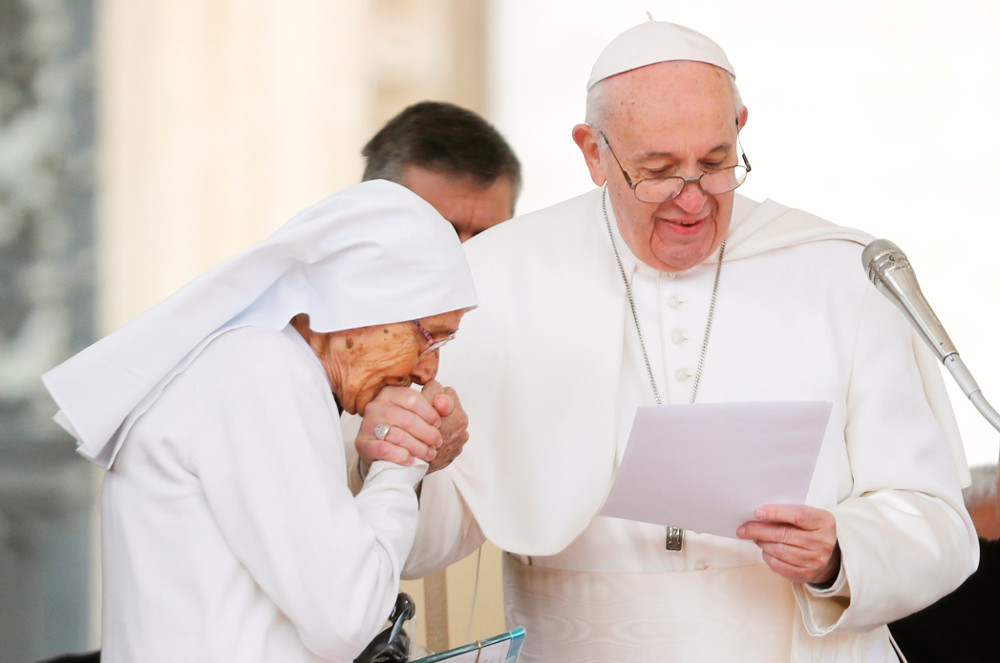 Sr. Maria Concetta Esu, an 85-year-old Daughter of St. Joseph, kisses the hand of Pope Francis after the pontiff awarded her the Pro Ecclesia et Pontifice Cross during his general audience in St. Peter's Square at the Vatican March 27, 2019. (CNS/Vatican Media via Reuters)

Vatican City — Pope Francis presented the Pro Ecclesia et Pontifice Cross to an elderly Italian missionary sister who dedicated her life to caring for mothers as a midwife in Congo, delivering more than 3,000 babies.

Presenting the honor to 85-year-old Daughter of St. Joseph Sr. Maria Concetta Esu, the pope said it was a sign of the church's "affection and gratitude for all the work you have done in the midst of our African brothers and sisters, in the service of life, of children, of mothers, of families."

"With this gesture dedicated to you, I would like to express my gratitude also to all the missionaries, priests, religious and laity, who sow the seeds of the kingdom of God in every part of the world," he said March 27 during his weekly general audience.

"Your work is great," the pope added. "You burn up your life by sowing the word of God with your witness. And in this world, you do not make news."

Taking advantage of Esu's presence in Rome "for a meeting with her sisters," the pope said he wanted to express his gratitude and "say a big thank you for her testimony."

"Dear brothers and sisters," the pope said to thousands of pilgrims in St. Peter's Square, "Sister Maria Concetta will return to Africa after her commitments here. Let us accompany her with prayer. And may her example help us all to live the Gospel wherever we are."

The elderly missionary stood next to the pope and was visibly moved by his gesture. Upon receiving the medal, she kissed it and thanked the pope. After greeting several of her fellow sisters, the pope placed his hand on her head to bless her.

Pope Francis first met Esu during his visit to the Central African Republic in 2015.

At his first general audience after returning to Rome, the pope said he was moved by his meeting with the missionary, noting that she was accompanied by a little girl who called her "nonna" ("grandma"). The pair traveled from Congo to Bangui by canoe to meet the pope.

"This is how the missionaries are: courageous," the pope said at the audience in December 2015. "An entire life for the life, for the lives of others. And there are so very many like this nun: so many sisters, so many priests, so many men and women religious who burn up their lives to proclaim Jesus Christ. It is beautiful to see this. It's beautiful."

Before giving Esu the medal, the pope continued his series of talks on the Lord's prayer, reflecting on the petition, "Give us this day our daily bread."

This part of the prayer, he said, "comes from a fact that we often forget; namely, that we are not self-sufficient creatures and that we need to be fed every day."

The simplicity of the request for bread is evidence that "Jesus does not ask for refined invocations" when Christians pray, he said, rather he teaches that "all human existence, with its most concrete and daily problems, can become a prayer."

"How many mothers and fathers, even today, go to sleep with the torment of not having enough bread for their children the next day," he said. "Let us imagine this prayer recited not in the security of a comfortable apartment, but in the precariousness of a room that lacks what is necessary to live."

He also noted that the prayer asks for "our daily bread" and not "my daily bread," which is Jesus' way of teaching his followers to pray "not only for ourselves but for the entire world."

Departing from his prepared remarks, the pope led pilgrims in prayer for the many children around the world who suffer hunger, especially those in war-torn countries.

Checking in on sisters around the world: COVID-19 has constrained ministries

Villagers extol legacy of Sr. Rani Maria, soon to be beatified in India