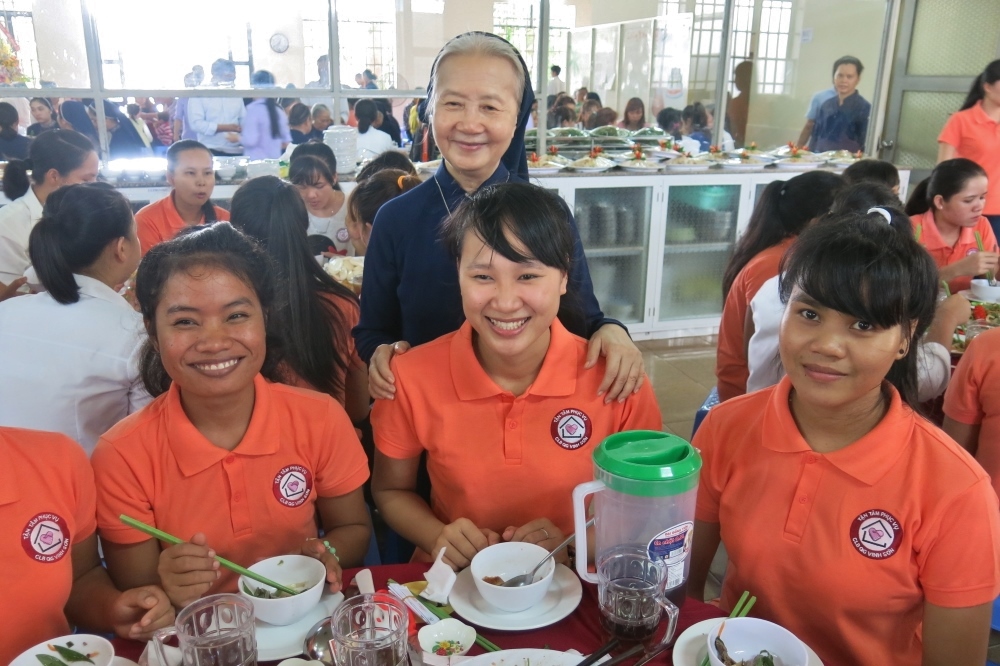 Sr. Pascale Le Thi Triu, a Daughters of Charity of St. Vincent de Paul nun, celebrates in May with housemaids at the 10th anniversary of job training courses offered by the sisters to disadvantaged women in remote areas of Vietnam. (GSR photo / Joachim Pham)

Ho Chi Minh City, Vietnam — Working as a maid has become a valued job in Vietnam, as public attitudes towards the profession change, thanks to the determined efforts by the Daughters of Charity of St. Vincent de Paul nuns.

The sisters marked the 10th anniversary of training courses in housework for disadvantaged young women in late May at the Salesian-run Phuoc Loc Vocational Training Center in Ba Ria Vung Tau Province, southern Vietnam. About 200 housemaids, nuns and teachers were present at the ceremony.

"We have had much success in helping many people change their attitudes towards housework, which was undervalued in the past," said Sr. Pascale Le Thi Triu, who organized the courses.

She said housemaids are no longer poorly paid and treated like slaves. Housework now is not only equal to other jobs but also considered a good career choice, she said.

"Housemaids from our center have highly professional skills and are treated with respect by employers," Triu said.

Contracts insure that the maids work five or six days a week, for eight hours a day. They are paid on time, receive fair treatment — including overtime pay when applicable — and proper accommodations at their employers' homes

The nun said most graduates of the program are employed soon after they finish the courses.

Housemaids draw average monthly salaries of 4 million to 7 million dong (U.S. $179-314), which are equal to or even higher than the salaries of college graduates, who have a hard time finding jobs due to a lack of practical experience, she said. Some senior housemaids are paid as much as 12 million dong, or $538 a month.

The current labor market favors workers who have vocational skills instead of degrees, so the nuns' program is on track with the trend. 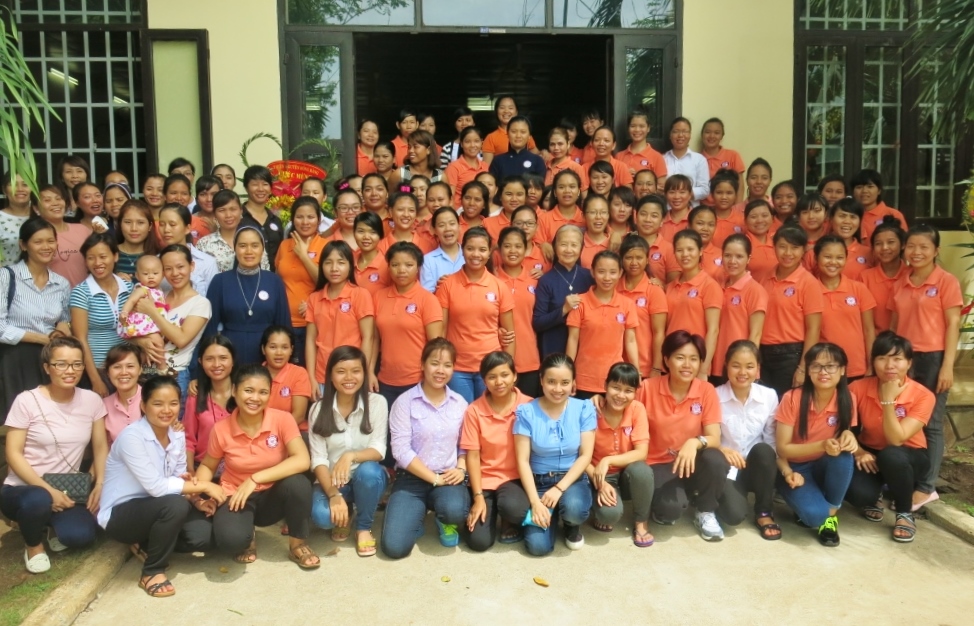 Triu, head of the sisters' charitable service office, said, although the office does not advertise the services of its domestic workers, many householders seek to register there to employ their graduates. "We can meet only 50 percent of the need for housemaids," she added.

The program screens potential employers to make sure they meet certain conditions and values. The nuns continue to serve as mediators between householders and housemaids to deal with any problems that may arise later.

Most of the employers are young couples and foreigners working in the Ho Chi Minh City area who can afford to have trained workers doing housework and looking after their children or elderly relatives.

The sisters' training ministry is open to people from Vietnam's 53 ethnic minorities, who make up less than 15 percent of the population and have their own languages and customs. They generally live in remote areas and have much less access to education, health care or civil protection. The majority Kinh tend to view them as an underclass. Global Sisters Report has covered a number of other sisters' ministries to various minority groups, mainly in Vietnam's Central Highlands.

Huynh Hoang Sa, a Ho Chi Minh City householder who employed a K'hor maid for three years, said she appreciated women trained by the nuns. "Although she is an ethnic woman, she soon got used to my lifestyle, worked hard and lived a virtuous life," Sa said.

The woman, who runs a business, said she trusted her maid and felt secure about leaving her in charge of the household. The young woman worked for her for three years then returned home to get married.

Hoang Sa has recently hired a new maid from an employment agency because no one from the nuns' program was available. She says she is dissatisfied with the new worker's values. "I hope to hire housemaids from the nuns in the future," she said.

In the past decade, 440 women, ages 16-30, from throughout the country have taken the one-year course at Phuoc Loc. Standards are high, so only 230 of them graduated, Triu said. The rest failed to follow the center's regulations and training schedules or otherwise did not meet the requirements.

The program can be motivating. Most of the students try to pursue their high school studies while they are at the center and even after they leave it. Many of them have graduated from college, and some joined religious congregations after the course. 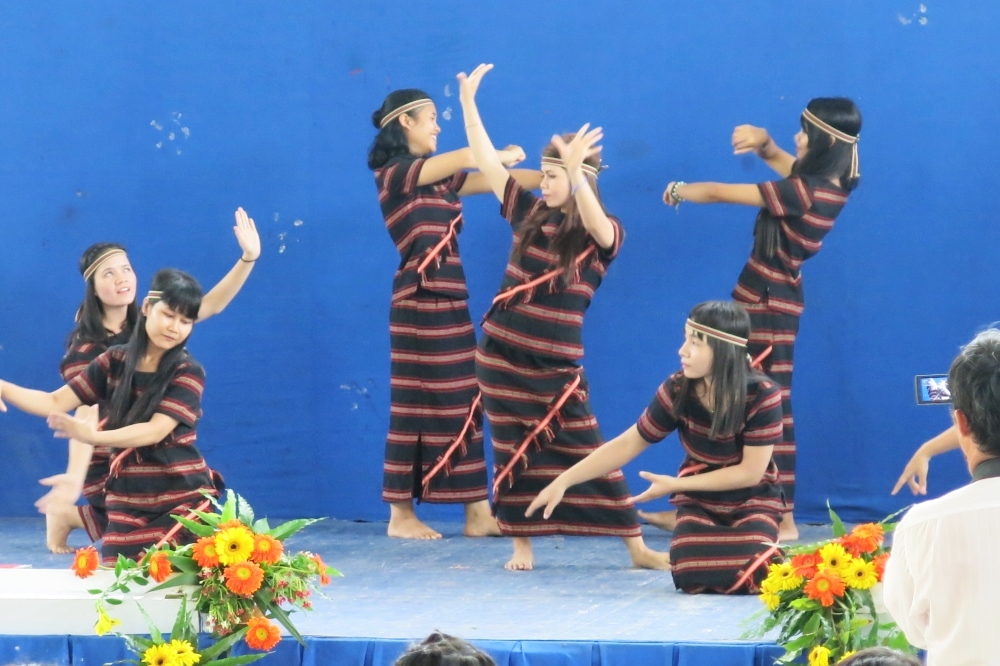 A few of the sisters also attend the courses so they can then teach professional skills to young women in other places. They use their skills to serve their convents, too.

"Through courses in housework, these disadvantaged women develop their personal capabilities, live with dignity, organize their own lives and families, and have jobs to support their families," Triu said.

At the anniversary ceremony, Vu Hoai Huong, on behalf of the alumnae and herself, expressed deep gratitude to the nuns and teachers who have brought a brighter future to her and the other disadvantaged women from remote areas who benefitted from the program.

Serving the poor among the poor, and blooming in religious life

Life in the South Bronx: Enter the Seton Teaching Fellows