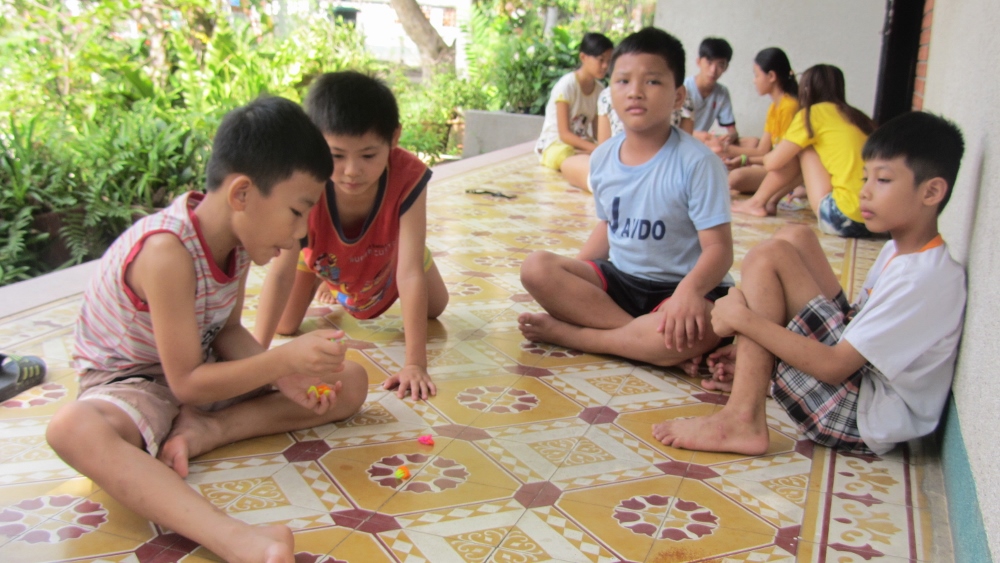 Orphaned children live in harmony with one another and play games in their home. (Joachim Pham)

Ho Chi Minh City, Vietnam — “Mum, I just made this beautiful craft,” Nguyen Van Thang, an eighth-grader, excitedly said, offering a heart-shaped craft item made of ribbon to the woman. Then she also replied with a gentle smile and clapped him on the shoulder.

“This is my home, and she is my second mum. I love her very much,” said Thang, who finished a course on craft skills last week. He promised to make a big heart craft to offer her on her birthday in August.

Thang is an orphan. The place he calls “home” is the SOS Children’s Village in Ho Chi Minh City, and the woman he calls “mum” – who cooks his food, washes his clothes, looks after him when he is ill, educates him on moral lessons and does other things for him – is Mary Le Thi Vinh.

They have been together since Thang was admitted into the village four years ago when his father had died and his mother could not afford to support him. She works as a housemaid for a living.

Now aged 62, Vinh started to work at the village 26 years ago. 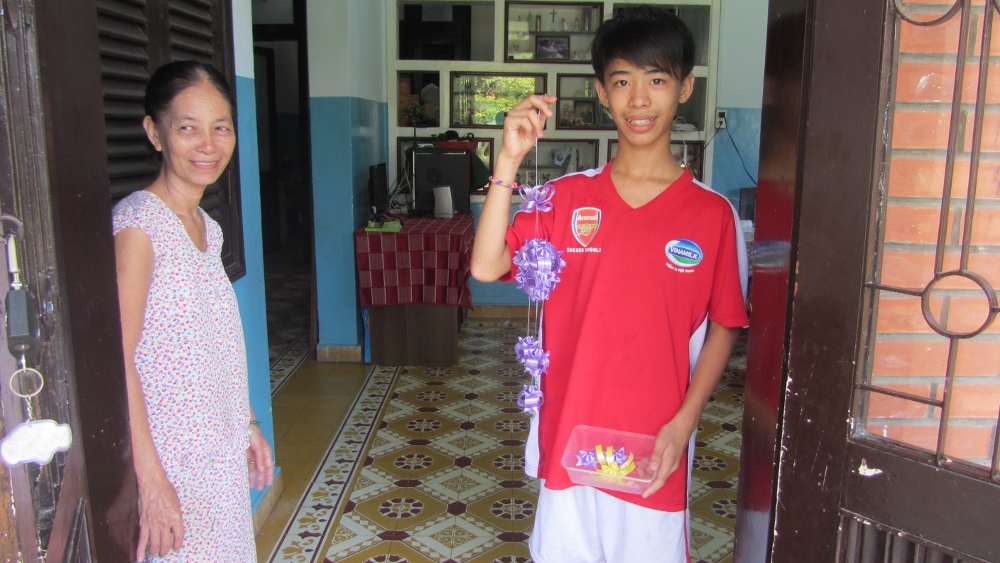 “I’ve mothered 30 orphans and abandoned children,” she said. “Six of them are married now and have children of their own. I am very happy for them and we really are a family.”

Vinh, a Catholic woman, currently looks after 11 children, including six Catholics, from 9 to 21 years of age in a house at the village. They range from fourth grade to college students.

Their daily work begins at 5:30 a.m., cleaning and tidying the house and going off to school. Later they play games with one another and review their lessons before reciting daily prayers and going to bed at 10 p.m. The older ones help Vinh prepare meals and care for younger children. Those who are Catholic take part in parish activities, and two of them are receiving First Communion in July.

Women religious quietly come to teach children catechism, English and other subjects, dance and sing songs on a weekly basis. Salesians of Don Bosco also teach them how to use musical instruments and do sporting activities.

“Although the children are from different situations and background, they live in harmony, love one another and respect me,” Vinh told GSR after two of her daughters asked her for permission to go out.

She said Thang used money his relatives had offered him during the last Lunar New Year to get a new shirt for her.

Doan Thanh Phong, who has been with Vinh since he was 7 months old and suffered severe asthma, now is a hefty man at age 25. Working for a local company, Phong regularly visits his home and buys food and gifts for his brothers and sisters. He seeks advice from Vinh and plans to marry in November.

“I am happy to have her. Without her, I do not know where I would have been,” Phong said.

The children are given monthly allowances of 760,000 dong (U.S. $35) each and opportunities to study at public schools. They are able to stay at the house until they finish their studies, although, at age 14, the boys move to the nearby youth house. Married people still keep in close contact with the family. 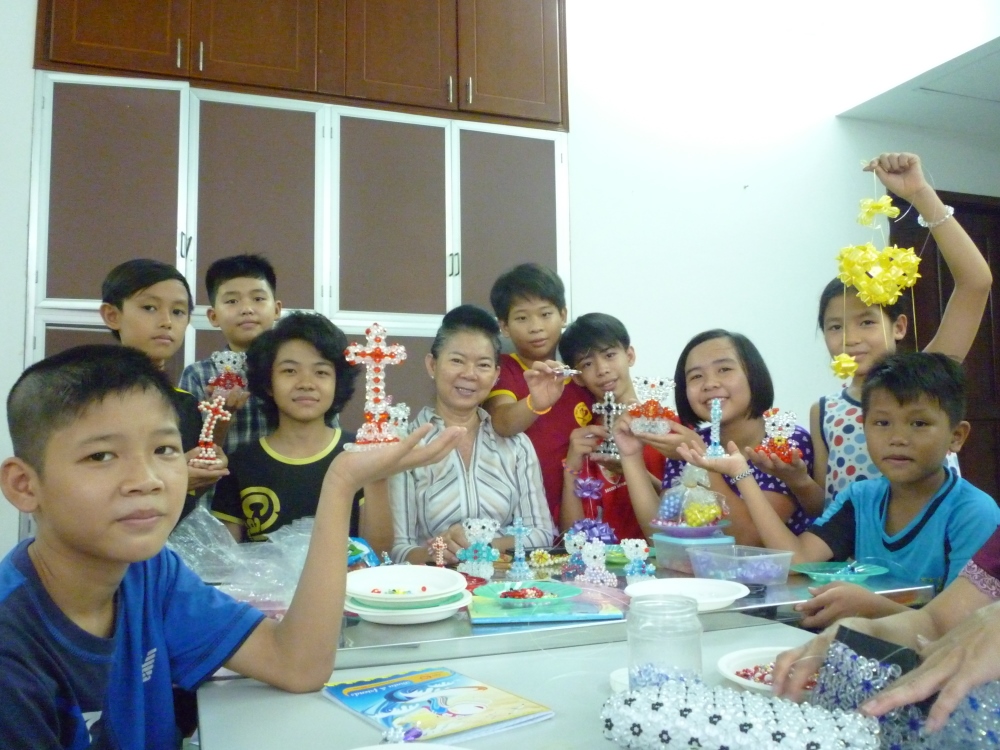 Children learn how to make craft items with volunteers at the village in early June. (Mary Nguyen)

Treat orphans as our own children

Vinh’s family home is one of 20 similar ones, with 264 children mothered by 20 women in the SOS Children’s Village, which reopened in 1990 and has been home to 507 orphans.

The women commit themselves to remain unmarried all their lives and to mother the orphans. They live on salaries and get annual vacations.

Vinh, one of the village’s four Catholic mothers, said she decided to work at the village because, “I love children who need loving care and motherly love.” At first she and other mothers intensively looked after malnourished and ailing children for months at hospitals, carrying them there and back by bicycle. They fed and bathed them and washed (and made) their clothes for months and took them to school.

Vinh also adopted four children from one family in 2003 when their own mother died of cancer and their father abandoned them. The youngest girl was then 5 months old and now is 16 and in 10th grade. 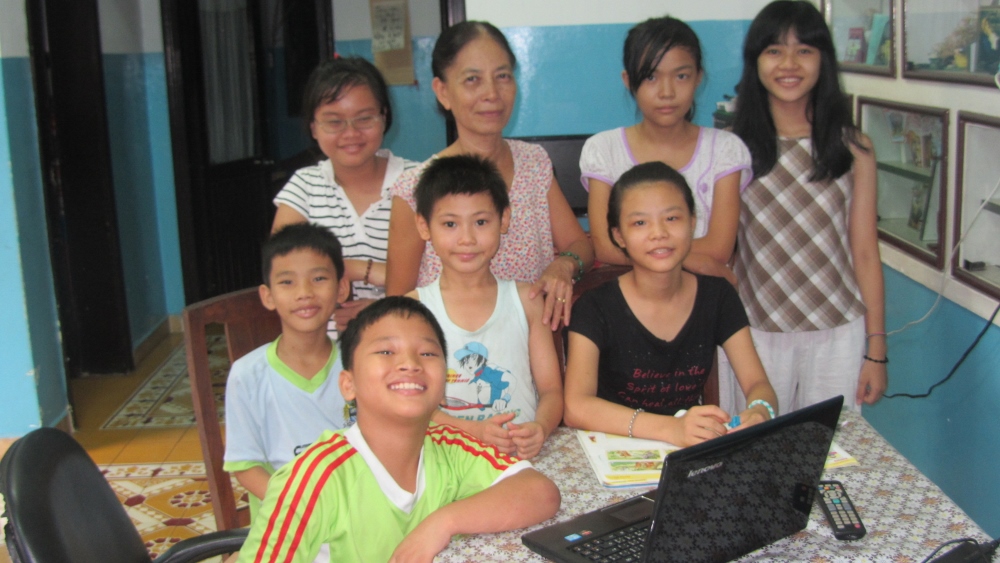 Mary Le Thi Vinh, top, second from left, and her children posed for a photo in their house. The children were learning ABC songs. (Joachim Pham)

“It is not easy for single women like us to care for children who are not our own children if we do not love them,” said Vinh, who took care of 13 children when she started work at the village. Some children were dirty, swore loudly and spat liberally.

Mothers never disclose the children’s background to people to avoid hurting their feelings.

Teresa Tran Thi Huan, another Catholic mother who entered the village when she was 31 years old, said children who used to live on the streets, lacked discipline at home or were beaten and faced starvation and domestic violence found it difficult to settle in to the new ordered environment of the village.

“They have received deep emotional and psychological wounds, so we offer care to comfort, heal them and educate them to be normal people so that they can integrate into the society,” she said. “These children become ours, and we cannot abandon them in any circumstances.”

Huan said her friends advised her to enter a religious order rather than work with orphans who would not respect them as their own mothers. “I believe that I love the children and they will love me.”

Vinh said she is concerned about her 15-year-old daughter, who wants to learn vocational skills. She wishes her children will finish college, have jobs and live a life as normal people so as to avoid the circle of poverty, illiteracy and the usual fate of orphans.

Many mothers are concerned about the future of the village and the children since few young women are coming to succeed them. “We are in our 60s and cannot retire from work,” Vinh said.

There are 17 of these villages in Vietnam, currently accommodating 2,700 orphans and abandoned children.

Based in Austria, the SOS Children’s Villages network extends across 134 countries worldwide. The organization is a social, apolitical NGO, which aims to ensure that every child grows up with love, security and respect in a supportive family environment.

Congregations in Cameroon are a faithful, effective presence

The power of anointing touch