Sisters in India known for their snake and scorpion bite treatment 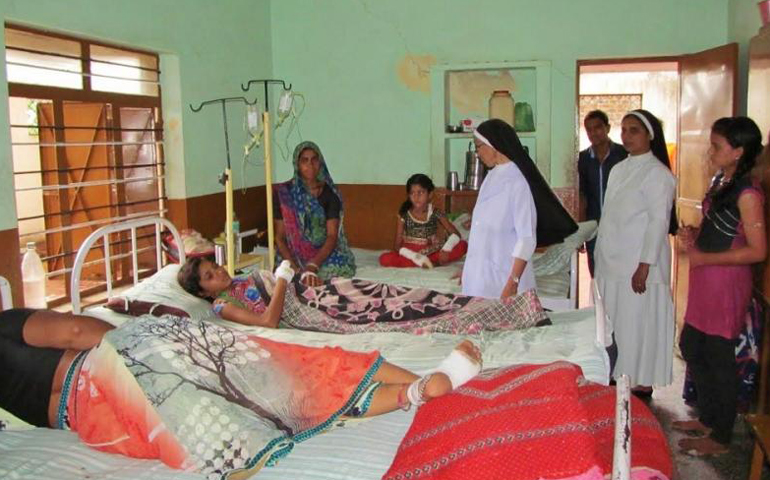 Ghonsla, India — Farman Khan was bitten by a cobra while working on a farm. The 35-year-old Muslim man killed the snake immediately and carried it to a nearby Catholic mission hospital.

He gave the snake to the nuns managing the Jai Rani (Queen of Victory) Mission Hospital in Ghonsla, a village in central India.

"We started his treatment immediately as any delay would have proved fatal," says Sr. Rosline Pathalin, a trained nurse. "Now he is getting better," she says as she stands by Khan's bed.

Khan, a landless agricultural laborer, is among thousands of villagers who have come to the hospital in the village near Ujjain, a temple town in Madhya Pradesh state. It is known as "Mission Hospital" and is managed by the Sisters of the Adoration of the Blessed Sacrament.

The 20-bed hospital treats snake and scorpion bite cases through a unique method and in the process helps end certain superstitious practices among villagers. 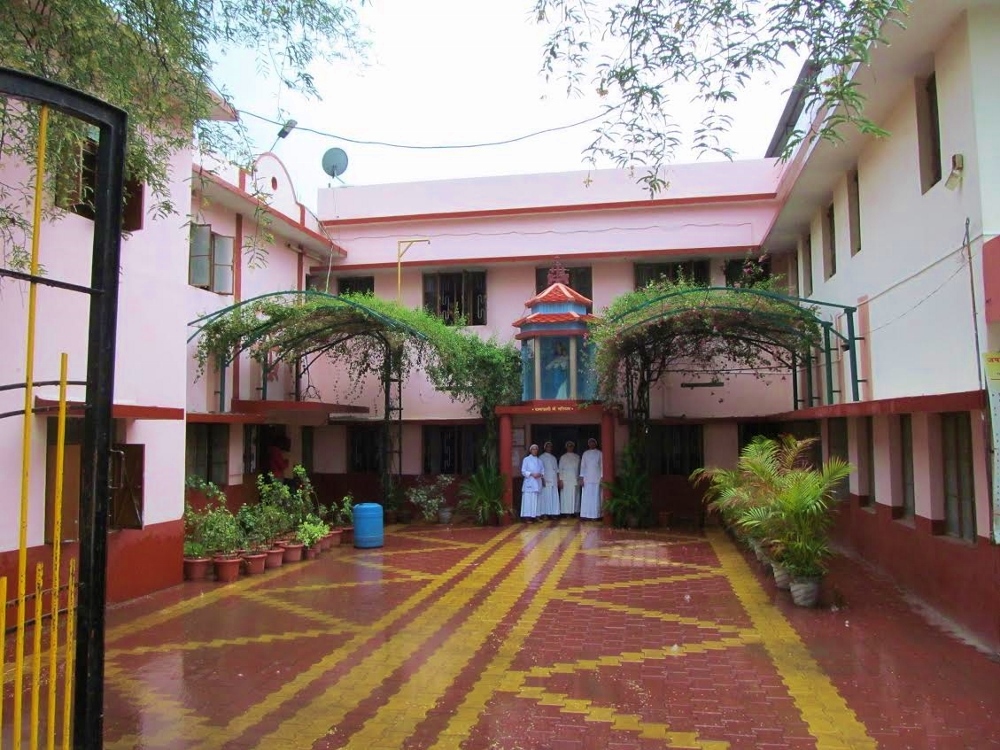 It began as a small dispensary in 1990 by Fr. Sebastian Kallada, who found that many people were dying of snake and scorpion bites in central India.

The Missionaries of St. Thomas priest came to Ghonsla in 1990 to teach in a minor seminary. One day, a group of more than 200 villagers and 12 doctors brought to the seminary an 18-year-old boy who had died of a cobra bite. The villagers believed the Catholic priest's special treatment would revive the boy.

"The doctors had pronounced the boy dead, but the boy's family and the villagers would not believe them until I checked," Kallada says. He obliged them and it marked the launch of a new mission in his life: saving people bitten by snakes and scorpions. "There was no one to treat them effectively," Kallada told GSR.

The priest had three "black stones" he brought from his native place in Kerala in case he was bitten by a snake. He used two of those stones on the boy's body without any success.

However, some villagers brought another patient the next day and the priest used the remaining stone on him. "He recovered," Kallada recalls. Word spread that the priest had a magic cure for snakebites. Soon, people bitten by snakes and scorpions flooded the seminary. "I had to treat them on the corridors and under the trees," he recalls. He treated a "complicated" snakebitten patient for 40 days beneath a tree. 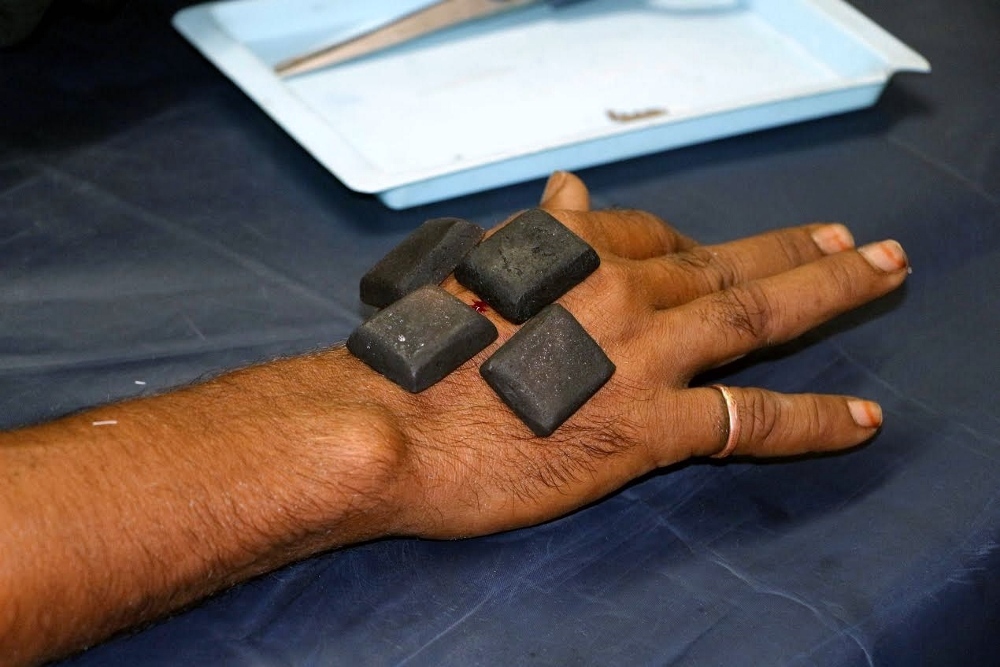 The "black stones" are the key treatment for snake and scorpion bites in a hospital managed by the Sisters of the Adoration of the Blessed Sacrament in central India. The "stone" is made from herbs found deep in the forest. (GSR photo / Saji Thomas)

As the number of patients increased, the seminary campus could not accommodate them, so Kallada bought 5 acres of land nearby, opened a dispensary and sought the help of the Adoration nuns. When he was transferred to another mission station, the nuns took over the hospital.

"When we reached here there was no road, electricity or any other facilities," recalls Sr. Pathalin, who has treated snake and scorpion bite victims for the last 18 years.

She says the local people, too poor to afford hospital treatment, would consult the village shaman. "Many lives could have been saved if they were taken to a hospital," the sister says.

The nuns use a traditional stone treatment practiced by aboriginals to cure bite victims, unlike other hospitals that use anti-venom.

"We use a black stone to suck the poison from the human body," explains Sr. Regina Kalladayil, another trained nurse who has worked in the hospital as long as Pathalin has.

The "black stone" is a product made from many herbs available in the deep forest. "Since it looks black and like stone, we generally call it black stone," Kalladayil says.

The stone has the capacity to suck the poison from the body bringing much needed relief to the victims. The normal duration of stone treatment is for 48 hours. However, the nuns repeat the process in case of swelling. "The stone is kept on the spot of the bite and it will remain stuck there as long as poison is there," Kalladayil explains.

The "stone" can be reused after it is kept in cow milk for 15 minutes. "Only cow milk is useful, for it absorbs the poison from the stone," the nun claims. 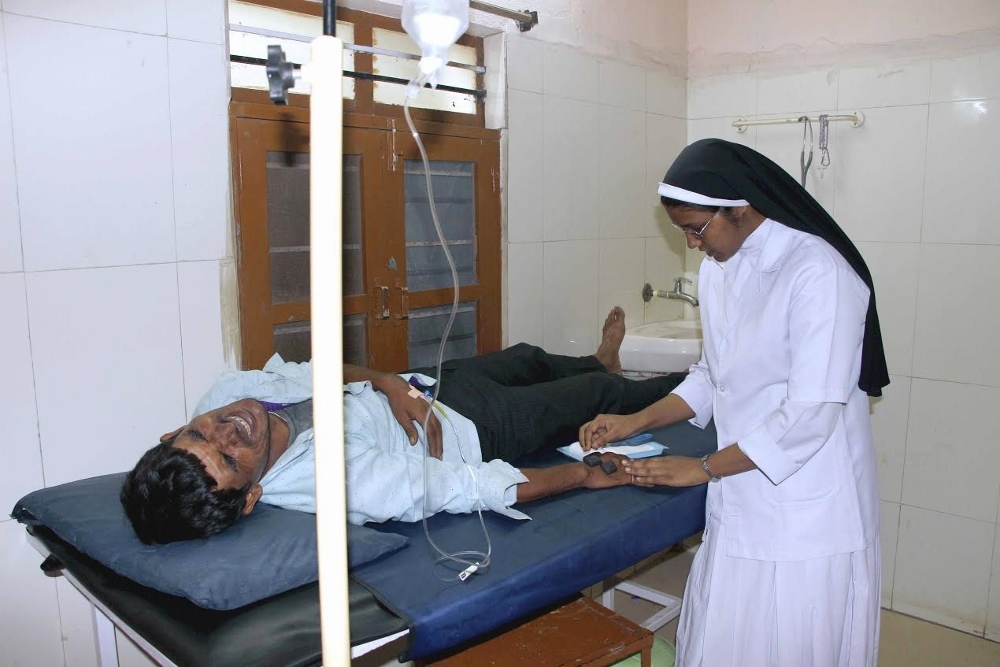 Pathalin says they can start proper treatment immediately if they know what bit the patient. The region has different genres of snakes and scorpions, some highly poisonous, whose bite can kill a person within half an hour.

The most dangerous among the snakes is the cobra, and its poison attacks the respiratory system directly, Pathalin explains.

Another dangerous snake is the viper, with five varieties. One of them is able to inflict poison without biting, and the affected flesh essentially melts, leaving the bone exposed. The viper's poison can seriously damage organs and cause renal failure.

Pathalin says, like Khan, many villagers bring the snake dead or alive to their hospital. Khan says he wanted the nuns to recognize the snake and start the right treatment.

Some species are protected, and the nuns release any live snakes back into the forest.

Scorpion bites also can be fatal, says Kalladayil, and many patients are already dead when they are brought in to the hospital.

She says the area has a dozen varieties of scorpion – among them, the highly poisonous red scorpion. If the victim is younger than 10 the chances of survival are slim, Kalladayil says. "The poison goes directly into the blood and affects the entire body."

Kalladayil says they get an average 500 scorpion bite cases in a year. In monsoon season, July through August, they get 3,000 snakebite cases. "If a patient comes in alive, it is almost certain that she or he would go back healthy." 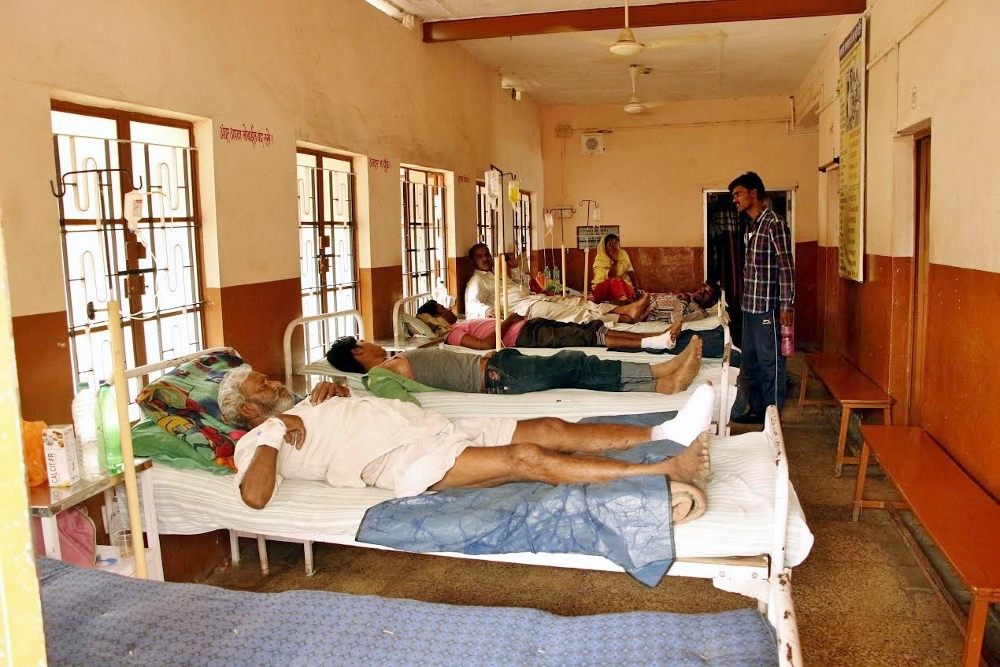 The hospital records show that it has treated more than 100,000 patients in the last 25 years.

Besides the poultice treatment, they administer anti-venom serum in critical cobra bite cases. "The use of anti-venom depends on the seriousness of the case," the 45-year-old nun says.

The nuns' admirers include medical practitioners.

"The sisters are so much experienced that even government hospitals refer serious cases to them," Niharika Gaur, a gynecologist working in the mission hospital, told GSR. She says local doctors first consult the nuns before treating snakebite victims. "Even a slight difference in calculating the quantity of venom can turn fatal," the 42-year-old doctor explains.

Sr. Merena Pulivilakathil, who has served in the hospital for the last four years, says cases where doctors had recommended amputation were cured instead through the sisters' treatment.

The hospital has also succeeded in dispelling superstition among villagers.

Akhila Bi, Khan's mother, says they used to go to a shaman for treatment. "The sorcerers would recite certain mantra and touch the snake victim with a broom to give the impression that they would heal with supernatural power. In most cases, the patients died," she says, adding that the villagers have stopped consulting shamans for snakebite treatment. 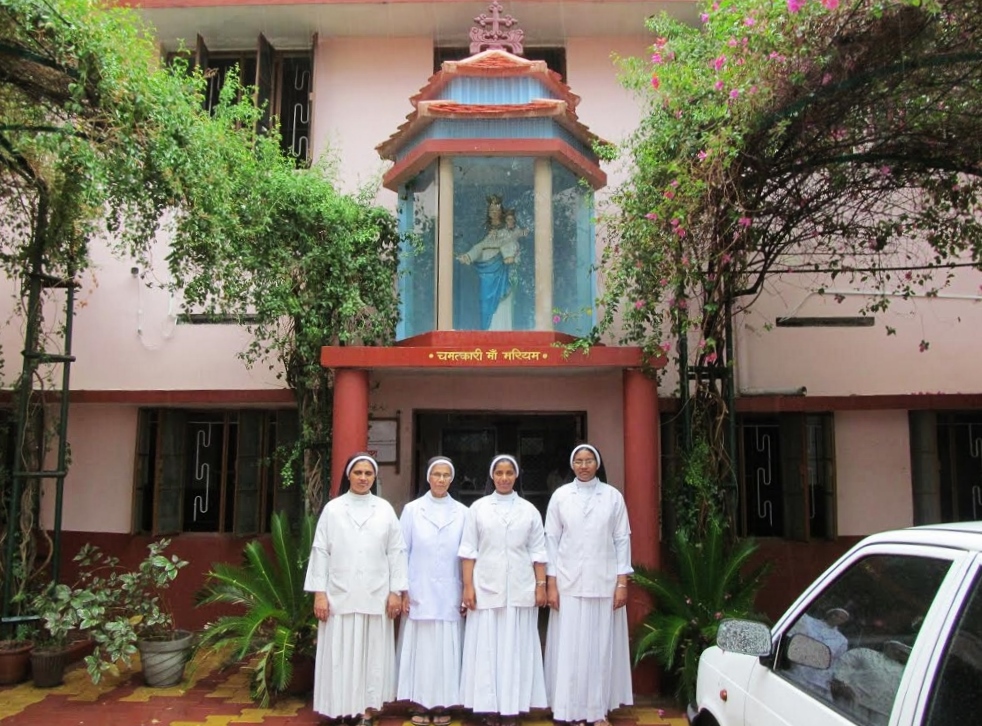 Mankuwar Bai, who sold the land for the hospital, recalls that those bitten by snakes or scorpions used to die without treatment. "Death was certain in the case of a snake or scorpion bite. The dedicated services of the nuns have saved thousands of valuable lives," the 75-year-old woman told GSR.

The hospital also allows the nuns to proclaim Christ as a healer in a region where religious conversion is banned by law. Madhya Pradesh is among the states in India that have passed laws against religious conversion through coercion, inducement and force. Some rightwing groups allege that Christian charitable activities are facades for conversion. Villagers seeking treatment do not become converts but are open to listening to the nuns' spiritual views on healing.

Kalladayil says they have not faced any trouble. She believes that God's blessing, more than their medicines, cures.

Chemmarapally says she feels the "healing touch of God" has helped cure "even the most hopeless cases." She says the nuns tell their patients that it is the healing touch of Jesus that cures them, not the sisters' greatness. "We also tell their relatives to pray to God."

Many recovered patients from nearby villages return to the hospital to pray to Jesus. Chemmarapally says patients come even from neighboring states.

Khan, who has recovered, says people in his village know that there is no other effective place for snakebite treatment. "It is common talk in our village that a snakebite victim will survive if brought to the mission hospital."

Q & A with Sr. Rosemary Nicholson, ministering to migrant children at the Tijuana border