Skip to main content
This story appears in the Rwanda feature series. View the full series.

The dense darkness of nighttime in rural northern Rwanda completely obliterates the immense hills that surround the village of Muyanza. But piercing this complete darkness a few times a week are two pinpricks of light, from the headlights of the village's lone ambulance. When someone needs immediate evacuation to the hospital, the ambulance races up out of the valley, bumping over a poorly maintained dirt road. Faustin Musabyimana, the driver, prays that heavy rains haven't washed away the makeshift bridges made of wooden planks laid over deep ravines.

This ambulance is the strongest link between the isolated villages scattered across the green hills and the government regional hospital on the main road.

Four Kenyan sisters from the Little Daughters of St. Joseph Congregation run the Muyanza Health Center for the Catholic Diocese of Byomba. Sr. Margaret Ekali Londung'a manages the health center, along with Sr. Margaret Wanjiku Njuguna, a nurse, and Sr. Rose Wanjiru Kimani, a pharmacist, while Sr. Martha Chebon Jeptarus runs a Catholic nursery school. Raising funds to buy the ambulance from their international congregation was one of their first projects when they took over management of the health center in 2001.

"There are regions [of Rwanda] where there is good communications and fertile areas, and they are easy to reach, and there are also difficult areas," said Londung'a, a nurse who is also the community animator, or community director. "Our spirituality as the Little Daughters of St. Joseph is going to the needy, the poorest of the poor, the marginalized. After Mother [Superior Licia Rebonato] visited many places, she chose the hardest, the most difficult, the most marginalized, and that's why we ended up in Muyanza."

The missionary sisters are providing more than just health care. Seeing them as a rock of support for the community, residents have begun to accept the sisters into the fabric of their lives. Rwanda has made enormous strides to recover from the 1994 genocide, when 800,000 people were killed during 100 days of fighting, plunging the country into chaos and destroying much of its infrastructure.

In a country that is trying to outrun the shadow of its own history, trust can be the most precious commodity. And trust is something the sisters are slowly nurturing, despite their outsider status, as residents of Muyanza begin to reveal the terrible things they witnessed.

During the genocide, Hutus, who are generally farmers, massacred the Tutsis, the political elite who make up about 15 percent of the population and control most of the government.

As a way to move beyond the divisive labels, current President Paul Kagame, a Tutsi who has been in power since 2001, has instigated many reconciliation measures. One of the most visible reconciliation measures is the campaign "I am Rwandan," which attempts to erase public mentions of the tribes of Hutu and Tutsi, building on a law that makes any reference to the ethnic groups illegal, while promoting the idea of a single national identity. But the realities that separate the two groups, both historically and currently, are harder to erase.

Rwanda has become a "poster child for African development," with 8 percent growth in gross domestic product for the past 15 years. Health care was one of the first places to reap the benefits of this development. The country spends 24 percent of its budget on health care, according to the World Health Organization, and many of the government health policies are effective and successful, like the "1,000 days campaign" to reduce maternal and infant mortality, with the aim of ensuring that every infant makes it to the age of 1,000 days healthy. According to The Guardian and CIA World Factbook, infant mortality rates dropped from 120 deaths per 1,000 births in 1998 to 56 deaths per 1,000 births in 2016.

But the development has not been uniform across the country. As beautifully paved asphalt roads and electricity lines unspooled across areas with large Tutsi populations in southern and central Rwanda, the Hutu areas in the north were underserved for years.

Muyanza is located in the northern region of Rwanda, a Hutu-majority area that was traditionally part of the opposition. The treacherous geography, with steeper hills and less arable land than other parts of the country, adds to the political isolation. With challenging agriculture and a lack of government investment, the residents have even less hope of climbing out of poverty.

Since 1976, different communities of sisters have provided round-the-clock medical care to the  people living in the valley around Muyanza (about 14,000 now), at a health center run by the diocese. Dominican Sisters ran the health center from its opening in 1976 until the genocide in 1994. From 1994 to 2001, it was the Sisters of Vincent.

Since 2001, a group of missionary sisters from the Little Daughters of St. Joseph calls Muyanza home. Today, four Kenyan sisters from that community live in the verdant green valley surrounded by hills, treating up to 1,800 people per month, providing services such as vaccines, prenatal care and malaria treatment. They also provide regular medication for 302 people in the villages living with HIV/AIDS.

"We are surrounded by hills, so reaching us can take at least an hour," said Londung'a. Previously, that meant whenever they had an emergency, they had to radio in to the regional hospital to request an ambulance. It would take at least an hour for the ambulance to reach the health center, if there was an ambulance available, and another hour to evacuate the patient, bumping along poor roads and winding up the hillside.

"If you have a delivering mother, we cannot have her die along the way," said Londung'a. "So the sisters made an initiative — we collaborated with our friends, and now we have an ambulance."

The ambulance provides an essential link to the outside world, allowing the sisters to get patients to the hospitals more efficiently and to pick up medicines and make deliveries.

Rwanda has a much-heralded national insurance plan that costs 3,000 Rwandan francs (US$3.60) per person per year, regardless of income or age. But even that amount is out of reach for impoverished farmers, who show up without health insurance or money to pay for treatment. Out of the approximately 60 patients per day, about three to five are unable to pay, said Londung'a.

"If someone comes to the health center, even if they have no money, you have to protect that life," said Londung'a. "They can also complain [if they feel the service wasn't satisfactory], and you are answerable to the government. This is very positive."

The sisters' commitment to treating all patients regardless of ability to pay also attracts attention, both among patients, some of whom come from areas beyond Muyanza due to the center's reputation, and from the Health Ministry.

"Whenever we have a meeting at the district level, our bosses will ask, 'Why does Muyanza have a lot of debt and the other health centers do not?' " said Londung'a. "It's because we are a religious congregation, and we cannot deny these services."

Londung'a said this scrutiny is very different from Kenya's health system, where she trained to be a nurse.

"We also have meetings with the minister of health; and at the district level, there's a lot of decentralized services," said Londung'a. "There's so much vigilance, monitoring and evaluation. The corruption is not allowed, so you have to deliver. There are no shortcuts."

The government of Rwanda places a huge emphasis on using technology to alleviate poverty and is integrating technology into community health initiatives through a program called RapidSMS.

With RapidSMS, the Health Ministry trains three community health workers in every village. In the Muyanza region, there are 25 villages, for a total of 75 health workers who are semi-volunteers, receiving benefits but no paycheck from the government.

"They are our point of reference, our eyes at the community level," explained Londung'a.

As the community health workers make the rounds of their village, they send brief updates via text messaging to a central data collection system. Community health workers will let the health center know of expected births or emergent health problems, such as diarrhea outbreaks and suspected malaria cases. The health workers can also do on-spot malaria tests and give medicine immediately if results are positive.

Muyanza is slowly starting to catch up with the rest of the country. The government has recently begun to implement major infrastructure projects in the region, including the construction of a new mountain road and a large dam that will provide regular water for agriculture and consumption. The dam has brought 2,000 workers to the region, in addition to many jobs for locals.

Njuguna noted that it hasn't been easy for the missionary sisters, even though they face some of the same challenges in clinics in rural Kenya.

"Before I came to this country, I thought I would find people who have no communication between themselves because of the genocide," said Njuguna. "I found something different. Although they could not speak openly, and there wasn't a great relationship [between the two ethnic groups] … in other ways they were already healed."

Londung'a, who has been in Rwanda for four years, said, "It's a long story, and you can't know it until you come and live here in Rwanda, to begin to understand. It's something deep in their hearts. Deep in their lives. They have a story to tell; they have seen a lot."

A few people have started to open up to the sisters about their experiences during the genocide, but others keep those memories buried deep within themselves, she said.

In their work at the health clinic, the sisters treat many patients who also have mental health issues, often stemming from the genocide. Those issues are exacerbated during the memorial period from April to July, when the country marks the anniversaries of large massacres with local ceremonies.

"The stories of what happened are being repeated, and this affects people," said Londung'a.

Three of the sisters are directly involved in the health clinic, but Jeptarus recognized another pressing need: quality education. She started a nursery school associated with the church to give children a head start when they begin elementary school, though she noted that the continuing public education is also poor.

"I feel this is the right place where I should be," said Jeptarus. "When I came here, I saw even the place itself is so beautiful. Each and every moment you wake up, you are greeted by the hills. It brings great joy to me, seeing that surely God is present even to those who sometimes are not recognized."

"From [the media], you may think that the same thing is still happening today [with ethnic tensions] as during the genocide," said Njuguna. "But if you come, you will experience something that is very different from the genocide."

As missionary sisters, they have found that concentrating on much-needed health and early education services have helped weave themselves into the fabric of the community. Unlike other missionary postings to other countries, where the symbol of acceptance might be invitations to festivals or traditional celebrations, in Rwanda, the highest level of confidence means sharing difficult stories.

Slowly, the sisters are able to begin shining light into the darkness of the post-genocide pain, cutting through the blackness the same way their ambulance weaves up the nighttime hills.

"When they accept you, you can listen to their story," said Njuguna. "You are at least able to help them get to the healing which is inside themselves, so that as they heal, they will not project it to the future generations."

[Melanie Lidman is a freelance journalist in Israel who covers Africa and the Middle East for Global Sisters Report.]

Additional Rwanda coverage - In Rwanda, one good deed, required by law, deserves another
Tracing Rwanda's highs and lows as it moves beyond history's shadow
Sisters listen to help heal as Rwanda marks 23 years since the genocide 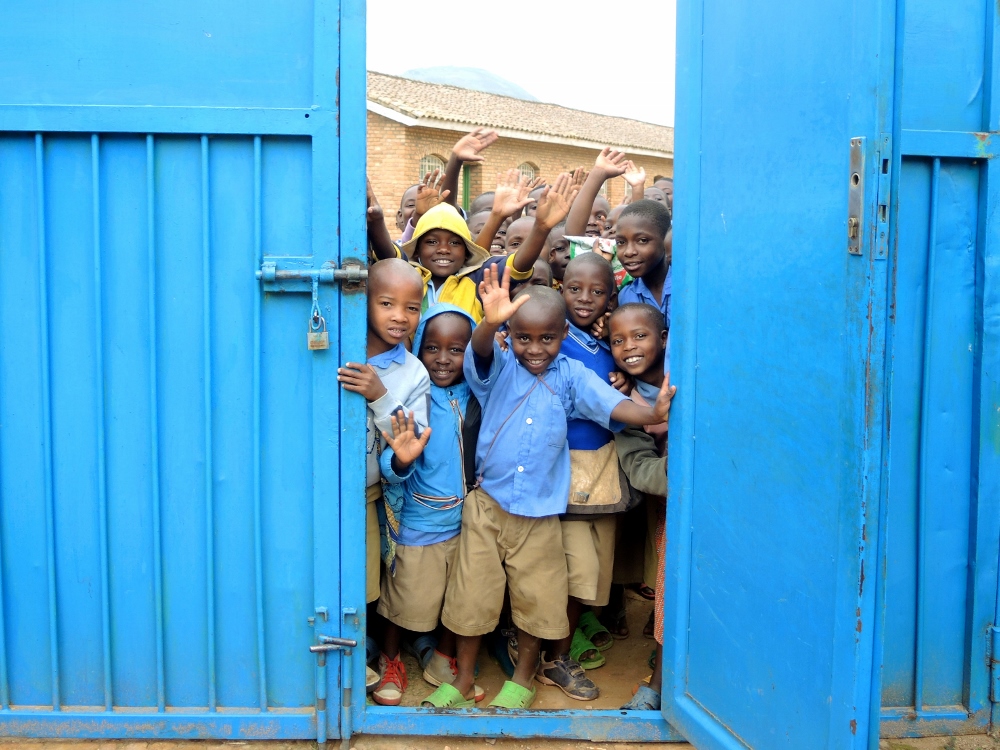 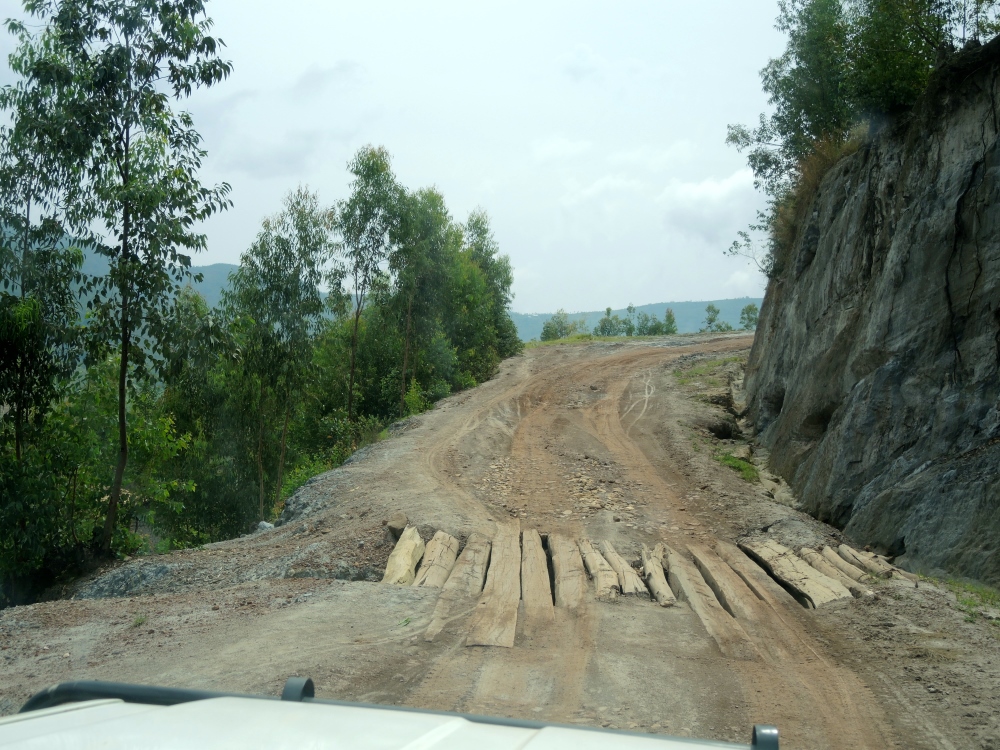 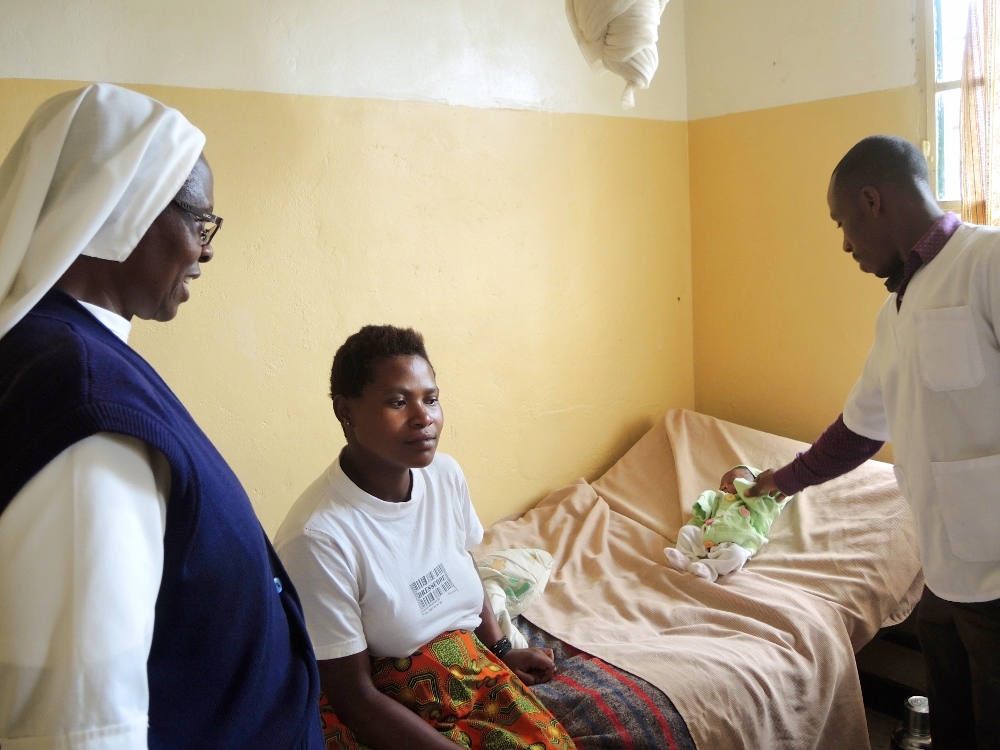 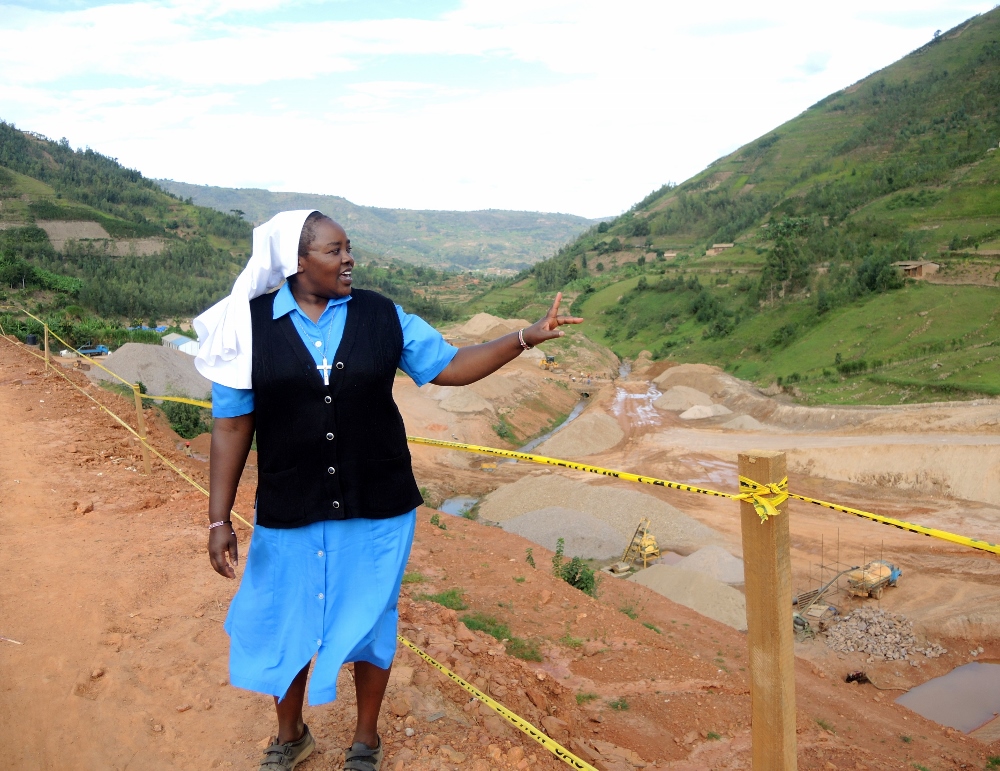 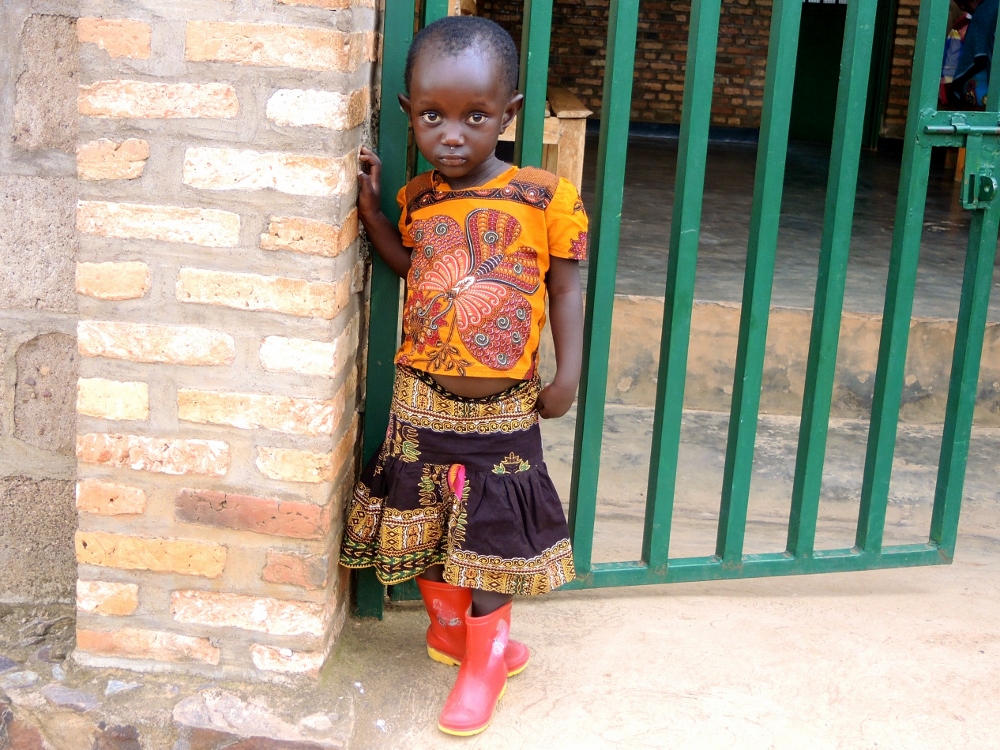 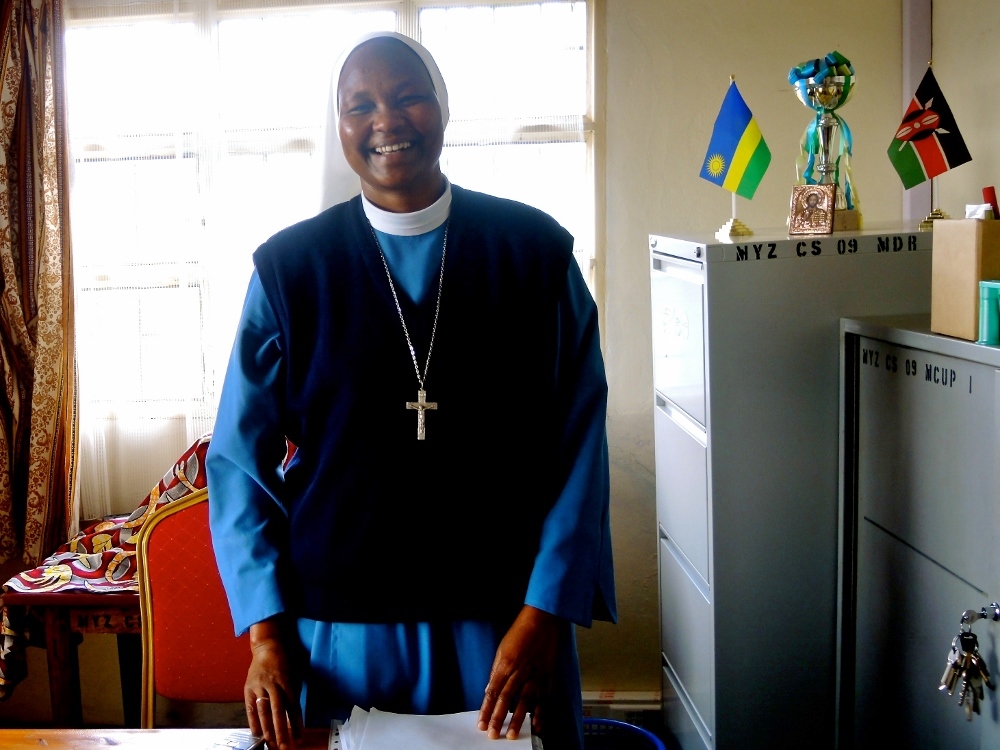 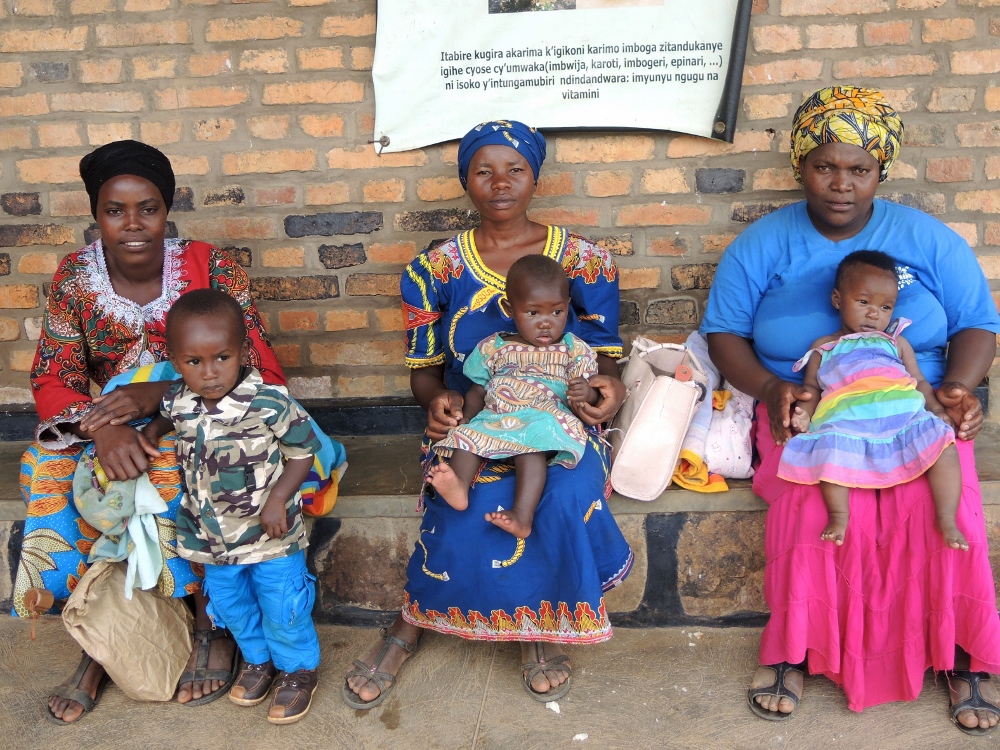 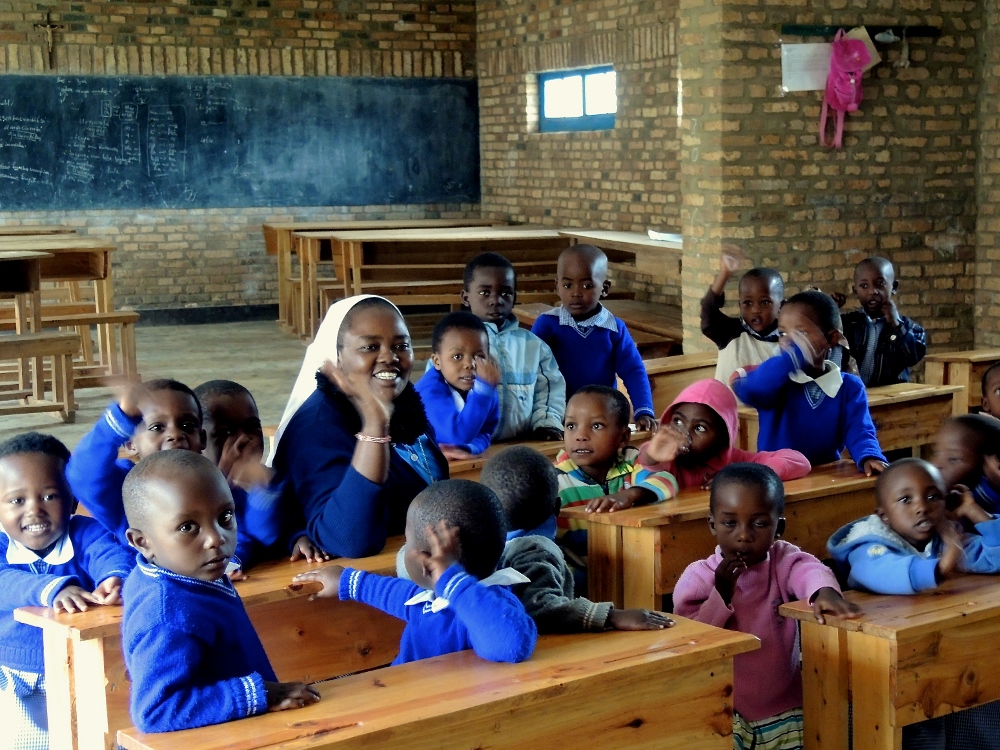 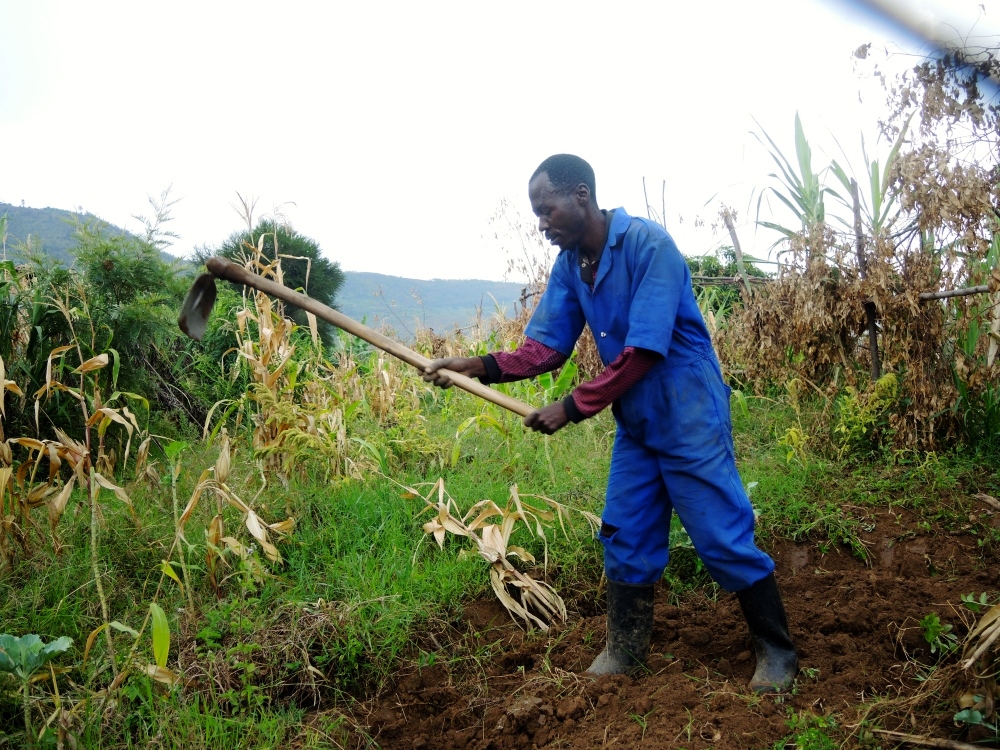