Sr. Alice Zachmann thinks of herself as being more of a peacemaker than a history maker.

She is both, according to the National Women's History Alliance, an organization based in Santa Rosa, California,* that promotes greater understanding of women's contributions to American society.

The alliance selected Zachmann as a 2019 honoree, and the 92-year-old sister planned to attend the March 30 awards luncheon in Washington.

Zachmann, a Minnesota native and Mankato resident, is among 11 honorees named this year; six are living, and five are deceased.

She is being acknowledged for her life commitment in support of peace and human rights — issues that she began publicly advocating for in the 1960s and '70s while working as a teacher at various parish schools within the St. Paul-Minneapolis Archdiocese.

Then, in 1975, while serving as a pastoral minister at St. Stanislaus in St. Paul, she traveled to Guatemala to visit a friend and fellow sister in her religious order, the School Sisters of Notre Dame.

The terrible poverty and suffering she witnessed in Guatemala, in contrast to the epic beauty of the landscape, left her feeling desperate to help. After returning to Minnesota, she started making up care packages and sending them with people traveling to the country. She wanted to do more, but she didn't know how to proceed.

"I felt I had to do a retreat," she recalled. "I didn't know what I was going to do. At the end of the retreat, I got a call from a friend in Washington. She wanted me to come to Washington after the retreat."

Her friend wanted her to start the Guatemala Human Rights Commission USA. The idea seemed absurd on the face of it.

"I spoke no Spanish — none. I had no money," she told The Catholic Spirit, newspaper of the St. Paul-Minneapolis Archdiocese.

Still, she decided she wanted to do it — if her sisters in Mankato gave her their blessing. "I took a bus down to Mankato, and met with the Provincial Council," she recalled. "They said they would support me but were unable to give me any money."

She assembled a small stake of cash — about $1,000 — to get herself and the fledgling organization established. The Catholic University of America in Washington agreed to let her set up shop, but her small office was in a campus building slated to be torn down in the not-too-distant future.

By June 1982, she had obtained IRS-approved nonprofit status for the organization, which meant she could start fundraising. She also began calling on members of Congress to inform them of the dire situation with respect to human rights in Guatemala. She started visiting the Guatemalan embassy too, "to tell them what we knew."

The Guatemalan government officials she contacted might have thought that by ignoring her, Zachmann would eventually give up and go home to Minnesota.

If so, they couldn't have been more wrong in their assessment.

Zachmann's character was put to the test even as a child. Her family endured grinding poverty as her parents struggled to make ends meet while operating the family farm in the 1930s and '40s — years marked by the Great Depression, drought and world war. "We were poor," she said simply.

But her "wonderful parents" taught her a great lesson about not giving up, no matter how hard the going. It was a lesson she would put to the test in her own work advocating on behalf of the oppressed and abused people of Guatemala.

Her parents also saw to it that she attended the local Catholic school at St. Michael Catholic Church, then a cornerstone of the strong German-Catholic community that settled in and around the rural town of St. Michael beginning in the 1800s.

One day she walked up to the church choir for some reason, and "it just came to me" to become a nun, she recalled. Her teacher at St. Michael helped her clarify her choices.

Following her heart, Zachmann applied to attend high school at Our Lady of Good Counsel, the Catholic girls school run by the School Sisters in Mankato. The school accepted her, but Zachmann had her studies interrupted twice, for two years at a time, because her help was needed on the family farm. In 1949, she professed her vows with the School Sisters.

After graduating from Mount Mary College in Milwaukee, Zachmann taught in Catholic grade schools from the mid-1950s until 1971.

After founding Guatemala Human Rights Commission, she ran it for 20 years until 2002. She stayed in Washington, voluntarily working to help establish the Torture Abolition and Survivors Support Coalition. She stayed on at there until she retired in 2012.

Now retired and living at her Good Counsel motherhouse in Mankato, Zachmann still promotes peace and justice issues in the world. She participates in a weekly prayer vigil, held every Wednesday at noon at a local park and regularly writes letters to apprise elected federal officials of their responsibilities to help victims of human rights abuses.

Zachmann, who celebrates her 70th year as a School Sister this year, knows the work to build more just societies around the world remains unfinished.

"I am getting an award for what I did," she said. "But I think of all the suffering people in Guatemala, people who have suffered and continue to suffer."

[Doug Hovelson writes for The Catholic Spirit, newspaper of the St. Paul-Minneapolis Archdiocese.] 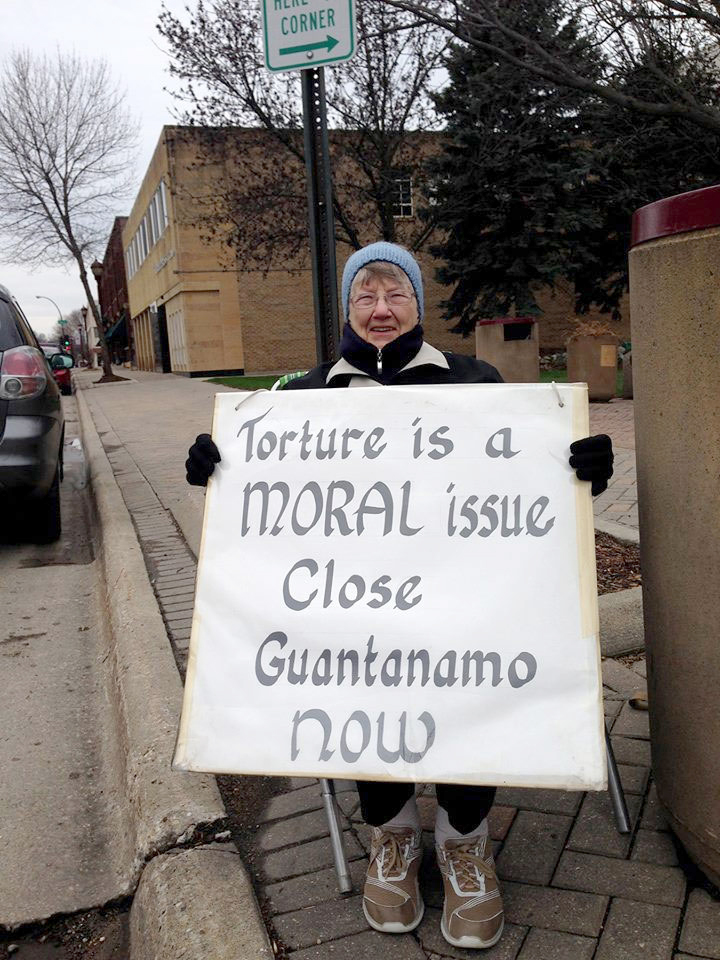