Sr. Habiba's kindly face is etched with sadness as she surveyed the muddy field where dozens of tents sheltering displaced Iraqi Christians once stood.

Cold, punishing rains and blustery wind swept through the encampment Oct. 20, earlier than expected for winter, crashing down the tents in the dead of night. Shoes, slippers and toys were strewn about, stuck in the muddy mess, signaling the mad dash for safety.

The recent wintery deluge drove out families, adding to the woes for those who recently ran for their lives from the brutal Islamic State militant takeover of Iraq's historic Christian heartland.

"The tents quickly filled with water and collapsed. They were engulfed in mud. Some people had to be taken to the hospital. This happened at 3 a.m.," said the nun, one of four Dominican Sisters of St. Catherine of Siena providing the displaced with shelter, food, hygiene and water.

They, along with a lone priest, serve about 1,500 displaced Catholics from Mosul, Qaraqosh and Bartella, Christian towns in northern Iraq overrun by the Islamist extremists in early August. All were forced to flee rather than convert to Islam, pay a protection tax or be killed.

Now they shelter both inside and outside of a youth sports center on the outskirts of Ainkawa, a mainly Christian enclave that is part of the Kurdistan regional government's capital, Irbil.

Habiba and fellow Dominican Sr. Ban, both from Qaraqosh, said they never realized that the danger posed by the Islamic State's capture of Mosul in June would eventually reach their own predominately Christian town.

"We thought we would remain safe. But suddenly the situation changed," said Habiba, who, along with the other women religious and clergy, requested that only their first names be used.

"There was shelling. In the morning, we discovered three bodies on the street outside our home. They exploded and body parts were in the air and on the walls. It was heartbreaking to witness such tragedy and the trauma all are experiencing," she said, suddenly chocking up and unable to speak.

"What is this Islamic State that is frightening the world? More should be done to remove these militants who have caused great human suffering to our people," implored Ban, director of one of Qaraqosh's Catholic schools.

"People have lost their homes and livelihoods," Ban told Catholic News Service. "The children cannot attend school as many facilities are housing the displaced. The youth and men have no work. No one knows what the future holds."

The sport center itself is bursting at the seams with the displaced. Mattresses cover the floors of the two-story building like scattered dominoes; tall piles of colorful blankets fill corners. Families camp out helter-skelter within the facility's rooms, but there is no privacy because space is at a premium. What is left of their worldly possessions is contained in some small suitcases and plastic bags.

Babies cry as people talk loudly; silence is a rarity. A badly traumatized woman wanders from room to room, muttering. But at least these people are living inside a building, rather than exposed to the elements outdoors.

"Our bishop has managed to get about 60 trailers, which are more stable to shelter against rain and the snow we later expect to get in January," said Syriac Catholic Fr. Bashar. The trailers can each hold seven family members and now house those whose tents were swept away.

"But we need far more trailers to house the many people coming for aid," he said. "They have run out of money and there is no safe place for them elsewhere."

Other displaced Christians have camped out in churches, unfinished buildings and parks scattered throughout the town. But the early onset of winter here has signaled yet another danger to those bereft of safe shelter.

At the unfinished Ankawa Mall, some 2,500 Christians are housed on three levels of roughly hewn concrete floors. Catholic, Orthodox and the Assembly of God churches are providing food, carpets, blankets and other basics to the families.

Children dart to and fro playing tag against the backdrop of washed shirts and socks strewn across makeshift clotheslines. Women complain of back pain with the constant hauling of water to wash dishes and clothes.

Partitions have been installed to ward off rain, wind and cold as well as provide some privacy to the families in the unfinished building. The churches have also tried to improve safety by installing guard rails to prevent people from falling. But all admit that the conditions are less than ideal.

The United Nations has said that more than 800,000 Christians, Yezidis and other minorities displaced by Islamic State attacks in Iraq are especially vulnerable as winter has begun. It said that insulated mattresses, thermal blankets, warm clothes for children and food are needed.

Most families are living in tents, which are not warm enough, she told CNS.

"It could be a catastrophe there," she warned. 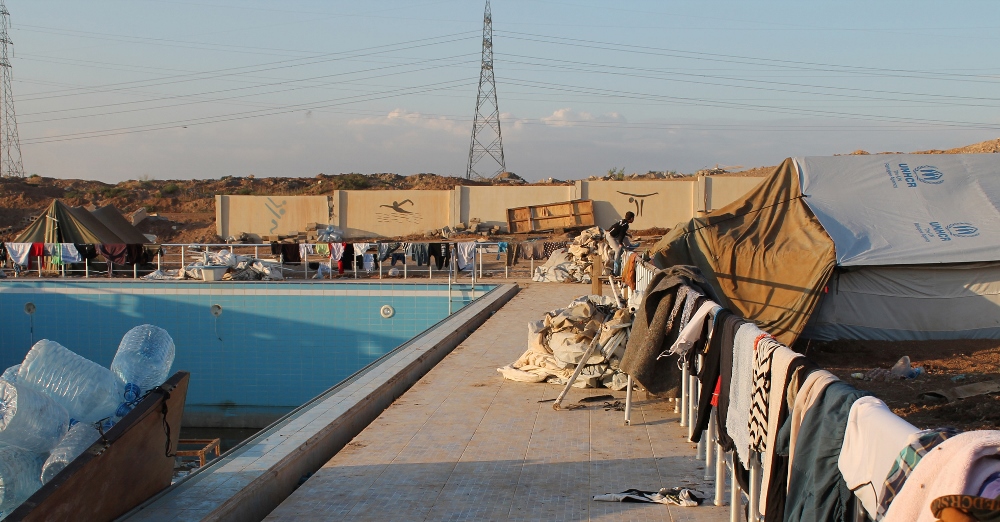