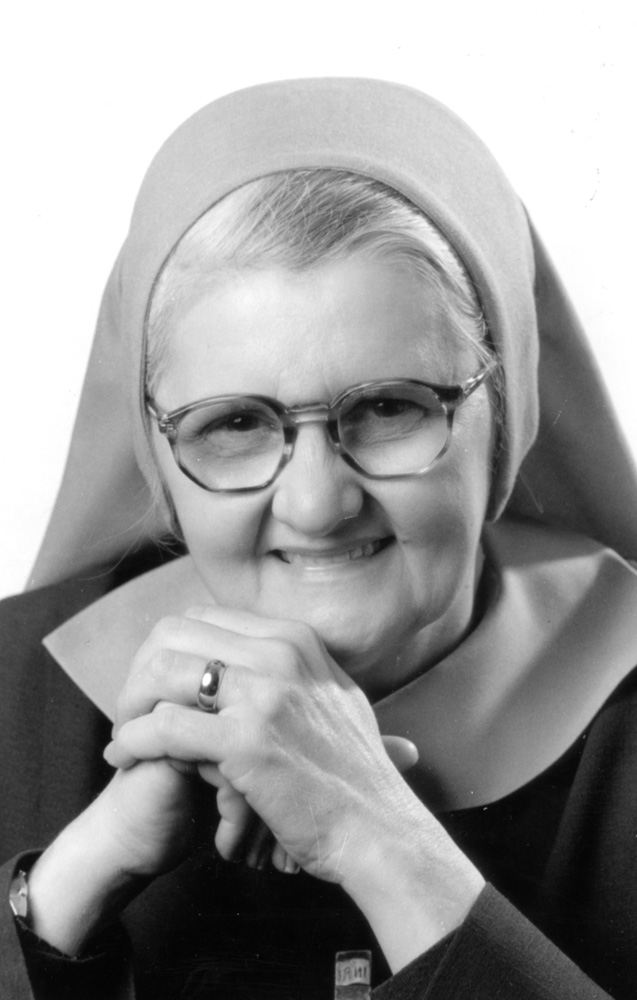 Birmingham, Alabama — Mother Angelica, who founded the Eternal Word Television Network and turned it into one of the world's largest religious media operations, died March 27 at age 92.

Feisty and outspoken, she was a major controversial figure in the U.S. church in the closing decades of the 20th century. At the same time, the international scope of EWTN's media operations gave her a ready calling card at the Vatican.

She built the venture into a network that transmits programs 24 hours a day to more than 230 million homes in 144 countries via cable and other technologies. It broadcasts in in English and several other languages.

Mother Angelica had been ill for years. She was operated on Dec. 24, 2001, in a Birmingham hospital to remove a blood clot in her brain after she suffered her second major stroke. It left her with partial paralysis and a speech impediment.

In November, she was placed on a feeding tube as she continued to battle lingering effects of the strokes. In February, members of her religious order, the Poor Clares of Perpetual Adoration, said she was in delicate condition and asked for prayers for her.

Mother Angelica died at her order's Our Lady of Angels Monastery in Hanceville, where she "was surrounded by the prayers and love of her spiritual daughters, sons and dear friends," said a statement from the Poor Clares.

On March 29, Mother Angelica's body will be received in a ceremony at the piazza of the Shrine of the Most Blessed Sacrament at the monastery. The chaplet of Divine Mercy will be prayed in the shrine's upper church. Her body will be transferred to her order's cloister for a private visitation with the Poor Clares.

A public visitation and recitation of the rosary will be March 30 and 31 in the shrine's upper church. Bishop Robert Baker of Birmingham will lead an evening vigil service and rosary March 31.

A morning funeral Mass will be celebrated April 1 in the upper church by bishops and clergy from around the world. Father Joseph Mary Wolfe, a Franciscan Missionary of the Eternal Word, will be the homilist. Following her funeral, Mother Angelica's body will be interred in the shrine's Crypt Chapel.

"While it will take some time to think more deeply about Mother Angelica's journey, story, accomplishments, controversy and influence, suffice it to say now that she, a woman, was able to do something that the U.S. Bishops were never able to do," said Sr. Rose Pacatte, a member of the Daughters of St. Paul and director of the Pauline Center for Media Studies in Los Angeles. "And that is, with lay collaboration, create first a Catholic television network and now a media empire with world-wide reach and recognition." 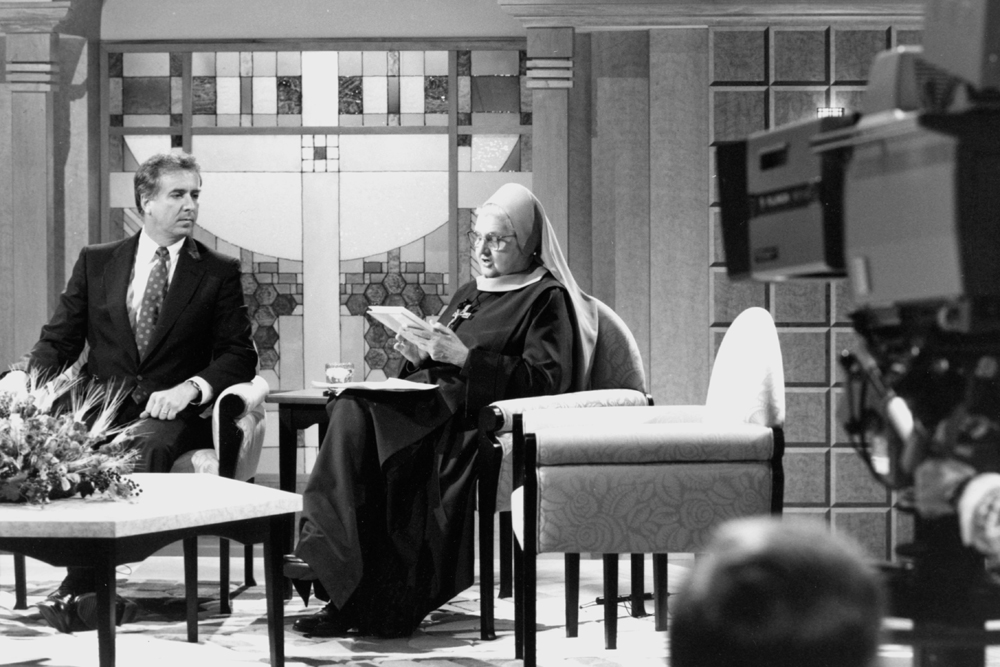 "This is a sorrow-filled day for the entire EWTN family. Mother has always, and will always, personify EWTN, the network which she founded," Michael P. Warsaw, chairman and CEO, said in a statement.

"In the face of sickness and long-suffering trials, Mother's example of joy and prayerful perseverance exemplified the Franciscan spirit she held so dear. We thank God for Mother Angelica and for the gift of her extraordinary life," he said. "Her accomplishments and legacies in evangelization throughout the world are nothing short of miraculous and can only be attributed to divine providence and her unwavering faithfulness to Our Lord."

In 2009, Pope Benedict XVI awarded the Pro Ecclesia et Pontifice Cross to Mother Angelica and Deacon Bill Steltemeier, then-chairman of EWTN's board of governors, for distinguished service to the church. The cross, whose name is Latin for "for the church and the pope," is the highest papal honor that can be conferred on laypeople and clergy.

Because of ill health, Mother Angelica received the award in her private quarters. But in the public ceremony, Baker said, "Mother Angelica's effort has been at the vanguard of the new evangelization and has had a great impact on our world."

Mother Angelica was equally at home giving a scale model of her satellite dish to St. John Paul II or ruffling the feathers of high-ranking church officials with whom she disagreed.

In 1997, she got into a public squabble with Cardinal Roger Mahony, then archbishop of Los Angeles, when, on her TV show "Mother Angelica Live," she criticized his pastoral letter on the Eucharist, saying it was confusing about the real presence of Christ.

In 1990, EWTN canceled an exclusive contract to air programs produced by the U.S. bishops after disagreements over EWTN's coverage of bishops' conference meetings.

In 1993, she termed "blasphemous" a church-sponsored World Youth Day event during St. John Paul II's visit to Denver because a mime troupe used a woman to portray Jesus in a dramatized Way of the Cross. She said the event showed the "destructive force" of the "liberal church in America."

The criticism sparked Archbishop Rembert Weakland, then head of the Milwaukee archdiocese, to call her attack "vitriolic."

"It was one of the most disgraceful, un-Christian, offensive and divisive diatribes I have ever heard," he said. "She invited everyone who disagreed with her to leave the church."

Mother Angelica often said she accompanied her faith with a "theology of risk" that gave her the resolve to undertake large projects without any clear indication she would succeed.

"Faith is having one foot on the ground and the other up in the air, waiting for the Lord to put the ground under it," she once said of her hands-on approach to doing things.

"We have lost the theology of risk and replaced it with a theology of assurance" that says "you have to know what's going to happen before you embark on something new," she said on another occasion.

Before starting EWTN, Mother Angelica wrote what she called "mini-books" on moral and inspirational themes. The popularity of the mini-books attracted media attention, and Mother Angelica began appearing on television talk shows. She said these appearances made her aware of the tremendous influence television has in spreading messages.

Prior to starting EWTN, Mother Angelica was renting studio space from a Birmingham television station to produce videotapes of her talks on religious issues for airing on the Christian Broadcasting Network. She broke the relationship with the network after it aired a movie she considered blasphemous.

With the support of her religious community, Mother Angelica began consulting with media experts about starting her own TV station, hatching the idea of EWTN. She was granted a license by the Federal Communications Commission, and EWTN went on the air in August 1981.

She began with $200 and little knowledge about TV production. The operation started in a building meant to be a garage on the grounds of the Our Lady of the Angels Monastery she headed in the Irondale suburb of Birmingham. Originally its daily programming of several hours was carried by three cable systems.

In 1992, Mother Angelica launched the short-wave EWTN Global Catholic Radio which broadcasts in English and Spanish. In 1996, EWTN started a satellite-delivered AM/FM radio network with programming also available for rebroadcast by local stations.

In 1998, Mother Angelica stepped down as the head of EWTN and Deacon Steltemeier was appointed chairman and CEO. He died in 2013.

Mother Angelica was born April 20, 1923, as Rita Rizzo in an Italian neighborhood in Canton, Ohio. She described her childhood as rough. Her father abandoned the family when she was young and her parents eventually divorced. She lived with her mother and said their existence was marked by poverty.

"We lived in rat-infested apartments -- our life was so hard. I was interested in survival so I didn't do well in school. It's hard when you're hungry and cold to study," she recalled in 1987.

In 1944, she joined her religious order and professed her solemn vows in Canton in 1953 as Sister Mary Angelica of the Annunciation.

In 1962, she founded Our Lady of the Angels Monastery, a move she said was to fulfill a promise to Christ if she emerged from an operation able to walk. The operation was necessary after she slipped while using an electric scrubbing machine and was thrown against the wall, injuring her spine. After the operation, she used a leg brace.

Selma then – the world now: A visit to the Edmund Pettus Bridge and justice today