Skip to main content
This story appears in the Colleges and Universities feature series. View the full series.

When Neumann University's Marguerite O'Beirne was pondering the best way to engage her campus community in informal conversations about Franciscan identity, perhaps it's no surprise that her mind went to tea. While "we're known for another drink," said the Franciscan sister, a bit mischievously, tea had been the beverage of her youth in picturesque County Sligo, Ireland.

"I serve a proper tea," says O'Beirne, who describes in detail how to do that, including brewing the beverage in a silver teapot (fie on microwave oven shortcuts). Tea and scones are provided in the same way founder and fellow Franciscan sister Everilda Flynn welcomed faculty and staff at what was then Our Lady of Angels.

Throughout the year, O'Beirne invites staff members from different offices to join her for an afternoon gathering and a discussion of how they are integrating Franciscan values into their work.

Though it started as a school to educate Franciscan novices, Neumann has long been coeducational; it also offers adult education classes onsite and online. "Many [students] are lay professionals and many don't come out of the Catholic tradition," she says. "You don't have to be Catholic or Franciscan, but hopefully you will engage with our culture and values."

As the vice president for mission and ministry at Neumann University, O'Beirne has a job description that seems to encompass the entire suburban Philadelphia campus. She supervises the staff at the Neumann Institute for Franciscan Studies and the director of pastoral service and campus ministry, and works with faculty to help them integrate the Franciscan mission values into their curriculum.

And that's only the beginning.

Retreats. New staff orientations. The Office of Service Learning and Community Engagement. The Institute for Sport, Spirituality & Character Development (an area of student formation the school has staked out as a specialty). Student groups who need assistance or support.

For 20 years, O'Beirne has worked alongside Neumann President Rosalie Mirenda to ensure that the school has a uniquely Franciscan stamp. Mirenda, the longest-serving president Neumann has had, has announced that she will retire in June. O'Beirne plans to stay on through the transition to new leadership.

"The religious congregations who initiated having a position like mine introduced made sure it was at the vice-presidential level," says O'Beirne. "Having a president who supports that is crucial."

"Our No. 1 goal was to integrate Catholic Franciscan identity with the sub-goal of carrying forth the legacy of the Franciscans of Philadelphia," says Mirenda, adding that the Institute for Sports, Spirituality & Character Development was a way of ensuring that this identity would flow into the Neumann athletic programs.

"It's definitely a welcome and open environment. It allowed me to reach outside of my comfort zone," says senior Jessica Cosenza, a psychology major who serves as sacristan for the chapel and seems to have fully absorbed the Franciscan call to minister among the disadvantaged, from working with the homeless at Philadelphia's St. Francis Inn to participating in spring break and summer service trips in the United States and abroad.

Kelsey Sullivan, also a senior, is a nursing major and service leader on the Aston campus, organizing local events like making peanut butter and jelly sandwiches to be sent off to nearby Chester, Pennsylvania, and traveling to Wyoming to a Native American reservation to serve alongside the sisters who work out there.

The process of evaluation and assessment that leads to integrating mission and identity has been going on at Neumann for decades, says Mirenda. "Our Franciscan sisters, right from start of my professional life with them, always included the laypeople around them in the work of managing and leading."

Each year the school chooses a value rooted in the Franciscan tradition, known by the acronym RISES (Reverence, Integrity, Service, Excellence, Stewardship), and explores it throughout the year in conversations with university faculty and staff. This year's emphasis is on service.

The intentional integration of Franciscan values and the way they are linked organically to school activities seems to be effective. Campus activities throughout the year are tied back into the year's theme, says Sullivan: "The presence of faith here on campus is present in every aspect from the moment we walk on the campus [as freshmen]."

As director of the Neumann Institute for Franciscan Studies, Sr. Patricia Hutchison, the third person to hold that title, has a central role in crafting a curriculum that incorporates a perspective that is uniquely Franciscan. The institute also offers ongoing support by faculty (including adjuncts) as they relay the Franciscan mission. With a mission both spiritual and scholarly, the institute, which received an initial deed gift from the Franciscans, was the brainchild of Rose Cecilia Case, who led the order and later served as Neumann's first vice president for mission and ministry.

While the Franciscan identity had always been a part of the school culture, says Hutchison, this was a way to embed it "in a much more intentional and academically appropriate manner."

Though the number of schools doing similar work was small in 2004, says Hutchison, by 2011, when she gave a talk at an Association of Franciscan Colleges and Universities meeting, that number had gone up by leaps and bounds, she says. "We've been very intentional, and I would say somewhat on the forefront."

But though the school must constantly evaluate its programs and figure out how to adjust to the needs of the time, says Mirenda: "If it wasn't for our Franciscan identity, our distinctiveness would be so blurred, people would go elsewhere. We must never lose touch with that."

Though there are many ways in which the curriculum echoes Franciscan theology and social teaching, Hutchison credits the personal warmth exemplified first by Case and then by O'Beirne for much of the impact the programs have had on campus. "Sr. Marguerite is extremely relational and impossible not to love. We don't make our programs [on Franciscan heritage] mandatory, but we get a huge turnout. We've been blessed in being able to offer opportunities and very blessed in that our faculty and staff are very open and receptive."

Though Neumann provides an opportunity to understand the academic side of the Franciscan tradition in a first-year theology course, it's the day-to-day interactions with sisters that exposed her to the essence of the community, says 2016 Neumann graduate Amanda Saunders, now a program associate at the Franciscan Mission Service in Washington, D.C. While there aren't as many sisters as there once were, they are omnipresent on campus, showing up at every sporting or campus ministry event, she notes.

"Sr. Marguerite will stop students in the hallway, most likely by name, and invite them to Mass, adoration, a spirituality or character event. The sisters are constantly inviting students to learn more."

As she closes out her 20-plus years at the university, Mirenda looks back, saying she was aware from the beginning of the weight of responsibility she bore. "It was awesome. I worked mightily and consciously to keep the sisters involved and invested my personal support. We do all that we can to keep them on the journey with us — if nothing else, to look at the future without themselves in it."

While both the sisters and the laypeople working alongside them are determined, well organized and well prepared, the poignancy of that statement is inescapable. But though Hutchison, now 69, says she knows she will most likely be succeeded by someone who is not a Catholic sister, she looks ahead with gratitude rather than dread.

"We have tried to help laywomen and men here to really take on this tradition. We can look at it and say this is going to carry on. We can't talk to ourselves. We must share more widely. That's really exciting."

Then she's off to another meeting in which she and her colleagues will find new ways in which that's going to continue to happen.

[Elizabeth Eisenstadt Evans is a religion columnist for Lancaster Newspapers, Inc., and a freelance writer.] 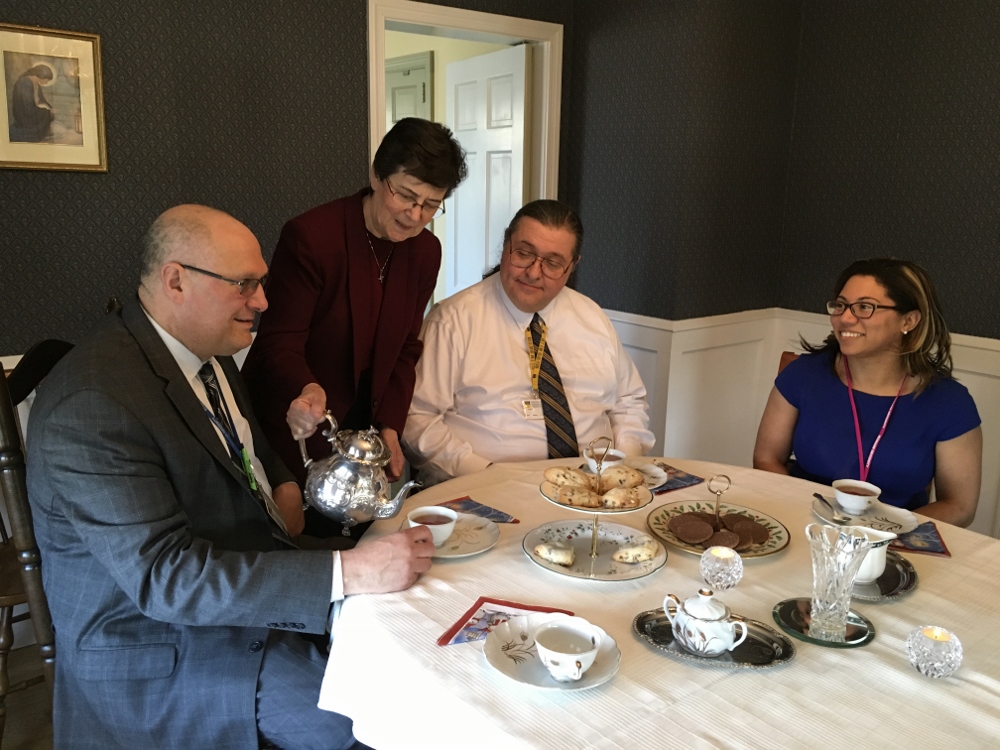 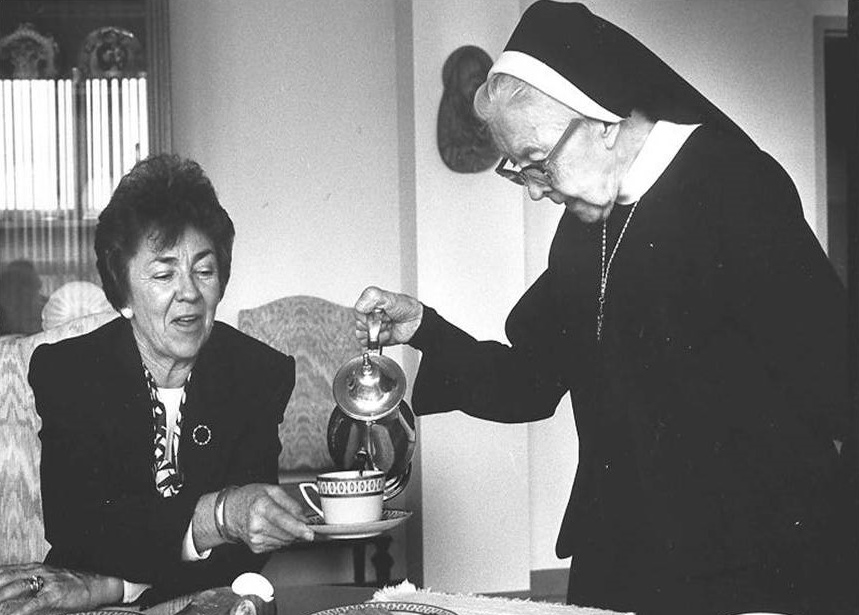 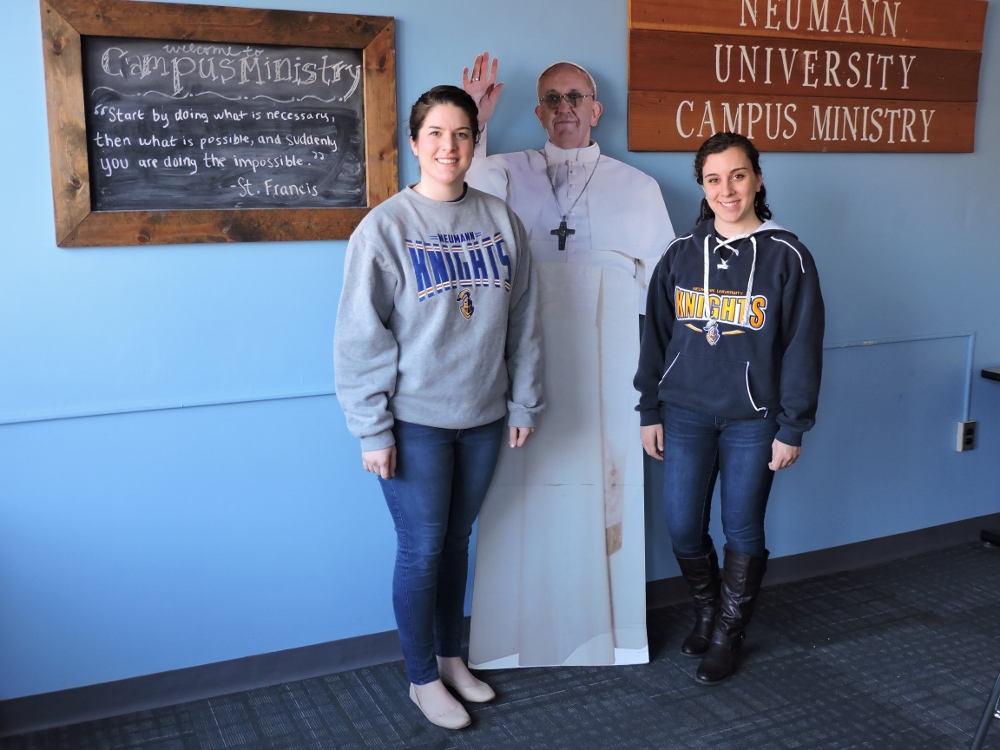 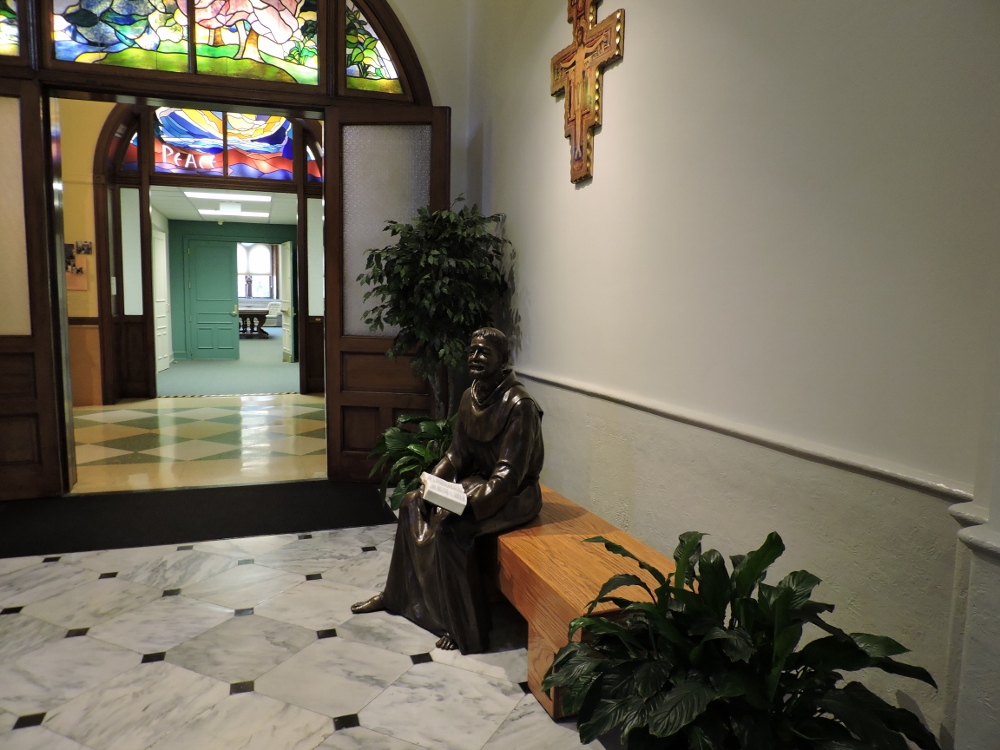 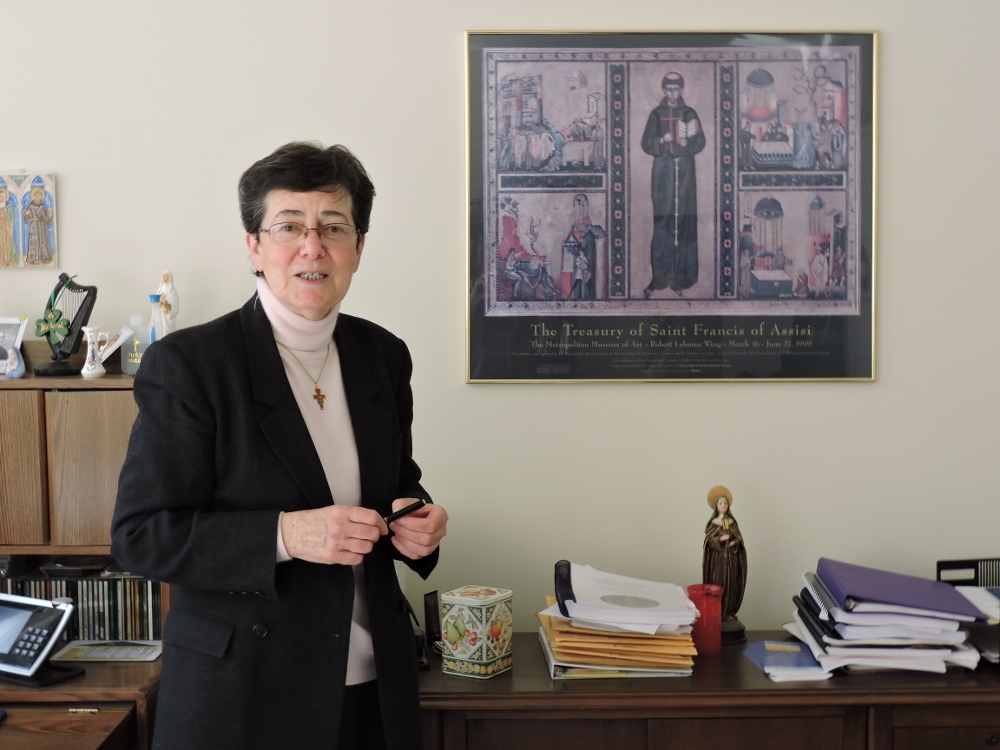 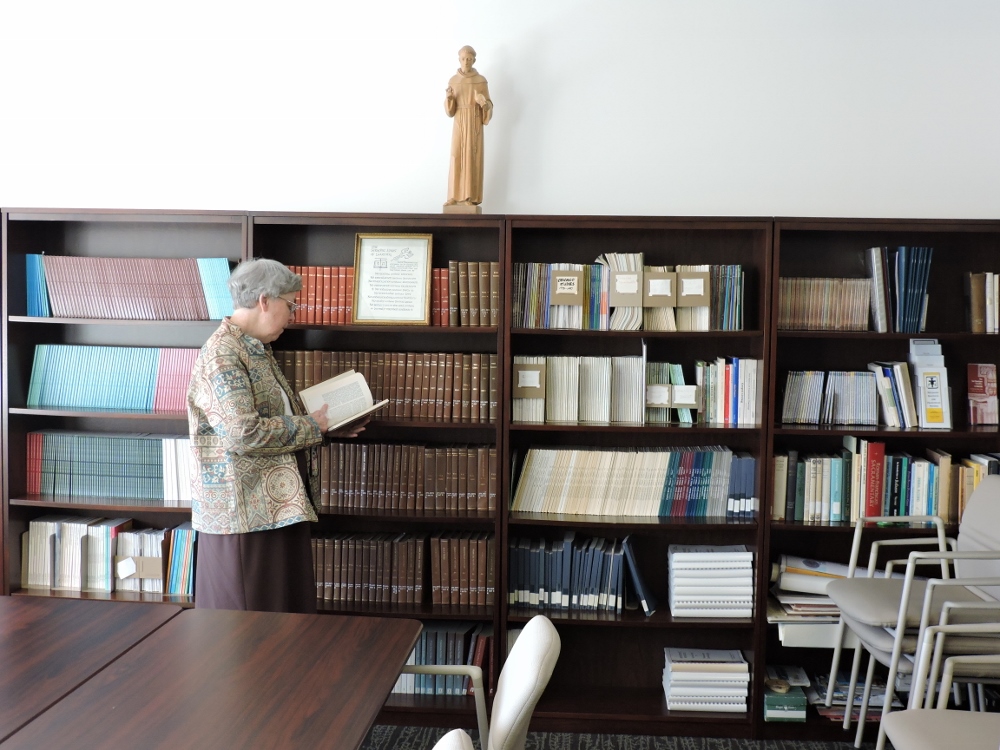