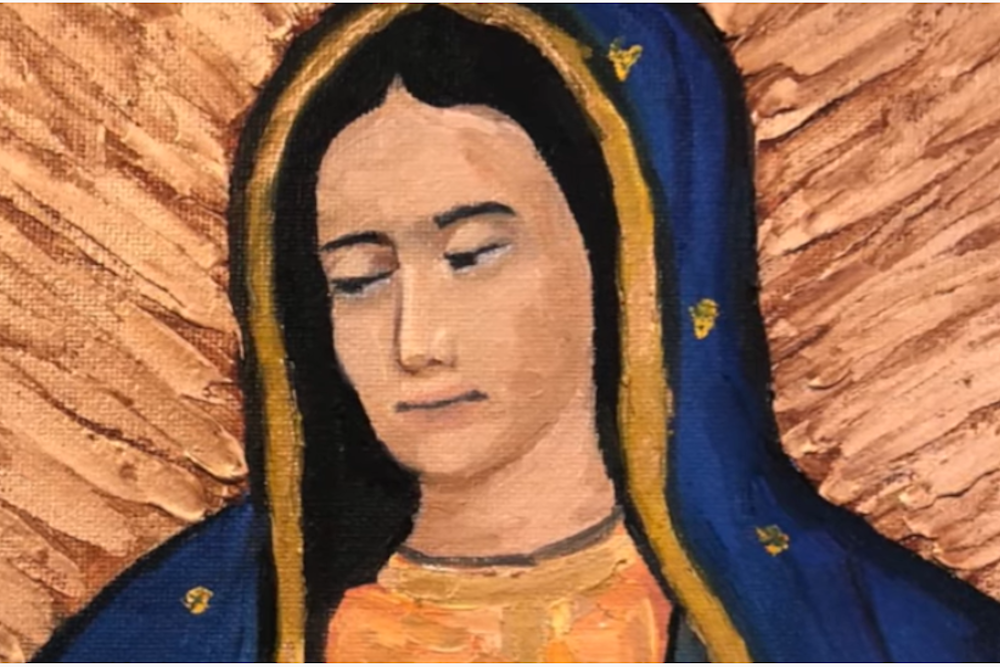 Detail of painting by Dr. Myma Albayda (Courtesy of Given Institute)

The Given Institute's inaugural online event "Discover the Gift" featured five keynote speakers who expanded on the event's three-part theme centered around young adult Catholic women: receive the gift that they are, realize the gifts they've been given and respond with the gifts only they can give.

Founded by women religious, Given is "a not-for-profit organization dedicated to activating the gifts of young adult women for the Church and the world. … Through leadership training, faith formation, and dedicated mentoring," according to its website.

Although the 2020 forum was postponed to June 2021 due to COVID-19 concerns, the online event brought together over 1,900 women in community and daily prayer worldwide, said Rachel Harkins Ullmann, executive director of the Given Institute.

Sr. Virginia Joy, a Sister of Life and director of the Respect Life Office for the New York Archdiocese, was the first keynote speaker for the event held June 10-14. Her address titled "Casting the Vision" focused on how women long to be loved and desire to become how God sees them.

Joy encouraged viewers to think of themselves as gifts from God and to recognize the gifts they've been given. She said women have the ability to enter into what every heart yearns: a longing to be loved.

Women have a love that is sensitive, generous and maternal, according to Joy. Additionally, women possess a feminine genius, symbolizing a "woman's capacity to make room for another."

"We have a unique capacity for love … a love that's receptive," she said.

Be Love Revolution founder Debbie Herbeck built on these themes and discussed how they help shape one's identity in the second keynote talk, "Receive the Gift that You Are."

She said women often struggle with identity and self-worth, asking, "Who am I? What value do I bring to the world? How much am I worth?" Herbeck said since women are created with purpose, their value comes from God.

God "wants us to know and believe that we are the crown of creation made in his image and likeness," she said.

Developing an intimate relationship with God is important, Herbeck added. God wants that connection with his children, but they have to be the initiators. Only then, can they start seeing who they are in God's eyes.

She pushed viewers to fight against comparison because it steals all joy and leads to discouragement. "The person God loves with that tenderness is who you are right now," Herbeck concluded.

Mother Gloria Therese and Sr. Maria Goretti, Carmelite Sisters of the Most Sacred Heart of Los Angeles, gave the third keynote address, "Realize the Gifts You've Been Given."

"God the father meticulously gives us a foundation upon which to build the gifts that he's given to us," Mother Gloria Therese said.

The talk pinpointed the foundation and blueprint upon which God's children build their lives. Goretti said there are three areas of identity that keep women grounded so the dreams they achieve are God's dreams.

Identity in God is "first and foremost rooted in our identity as beloved daughters of the heavenly father, next as a treasured friend of Jesus Christ and then lastly as a treasured temple of the Holy Spirit," she said.

Goretti motivated participants not to put all of their focus on personal shortcomings, saying God can use "everything of us to be able to support others to pursue your dreams."

"There is such an incredible gift that God has given to you that he wants you to be able to discover," Therese said. "He knows that he can trust you enough to give that gift to others. We pray that you can be that encourager to others, one that will truly affirm the good in others."

Dr. Myma Albayda, assistant professor of medicine in the Division of Rheumatology at Johns Hopkins, gave the fourth talk, "Respond with the Gift Only You Can Give." She detailed how she responded to her gift of painting that she discovered about five years ago.

"It's like finding a jewel that you never really made yourself," Albayda said.

Sr. Virginia Joy, a Sister of Life, led the keynote addresses with her talk titled "Casting the Vision," during the Given Institute's "Discover the Gift" online event June 10-14. (Courtesy of Given Institute)

Painting became one of the ways she prayed, often painting scenes of her prayer and religious figures, including Jesus, Our Lady of Fatima, Our Lady of Guadalupe and St. John Paul II.

Albayda said art has become a new vocation that brings her unspeakable joy.

"We all have the vocation to create beauty, to seek beauty and to make beautiful the places we live in," she said.

The final keynote talk, "Activating the Network," centered on how photographer and social media consultant Sonia Quintero reconverted to Catholicism and discovered her vocation.

Quintero emphasized three key points: "Your calling is unique, your 'yes' is important, and the Lord will always ask you to trust him."

She never thought she would leave the church, but after her confirmation in 2014, she "never stepped foot back into the church."

After the death of her grandfather, however, Quintero gradually grew close to God. When she was in college, a FOCUS missionary invited her to attend a SEEK Catholic conference. She decided to go.

"Someone saw me for who I was … a broken, scared child," Quintero said. 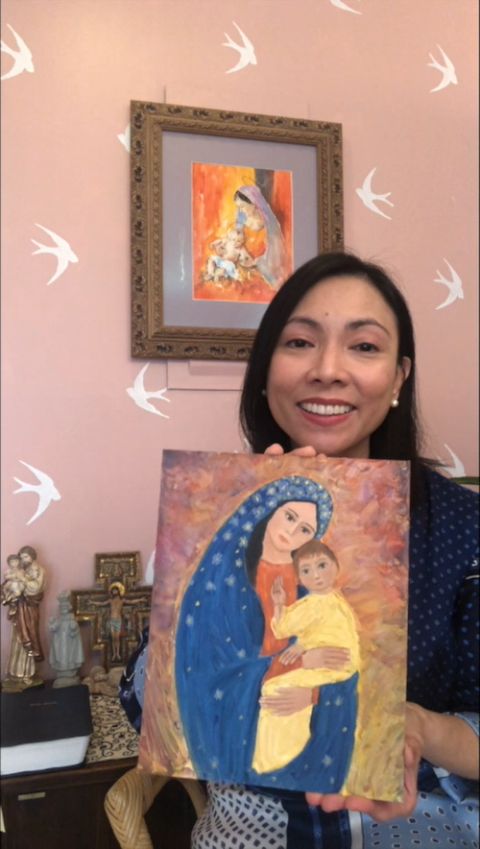 Dr. Myma Albayda, assistant professor of medicine in the Division of Rheumatology at Johns Hopkins, spends time in prayer by painting religious figures, including Our Lady of Guadalupe. (Courtesy of Given Institute)

At the conference, she was withdrawn at first. One day, however, a priest caught her attention. Fr. Mike Schmitz cried during one of his talks on the main stage. Schmitz referenced the parable of the prodigal son and said nothing can keep God from desiring his beloved child to return.

"At that moment, it clicked. I was not too far gone," Quintero said. "I was presented with the Eucharist, and I felt a revelation so deep where I knew nothing except that God was present in the Eucharist."

She said "yes" to God and trusted him. In return, God has blessed her abundantly.

Letting go and allowing God to work in our lives is important too, according to Quintero. Each day is a new opportunity for us to let go of our desires and hold onto what God desires for us, she said.

They honored St. John Paul II, born 100 years ago. Juan recalled how he influenced her vocation, as he gave himself completely to his calling to serve others, she said.

"His witness of commitment was so powerful for me," Juan said during the welcoming program. "Since entering religious life eight years ago and reading many of the documents he wrote, he has some really beautiful things about religious life in particular and the gift that religious women are called to be in the church."

Alvarado presented the reflection question for the night, "What are you hoping to discover during these five days?"

"I'm hoping these talks will reveal whatever God wanted me to learn from this time of isolation so that the coronavirus pandemic and also the division that we're seeing around the country, that there will be some healing and also some fruits," Alvarado said. "We cannot walk away from such a moment of crisis and sacrifice without bearing fruits."

[Sydney Clark is in graduate school at the University of Maryland, College Park, studying multi-platform journalism. She is a student member of the National Association of Black Journalists and a multimedia freelancer with Catholic News Service, the Hyattsville Life & Times, and College Park Here & Now.]