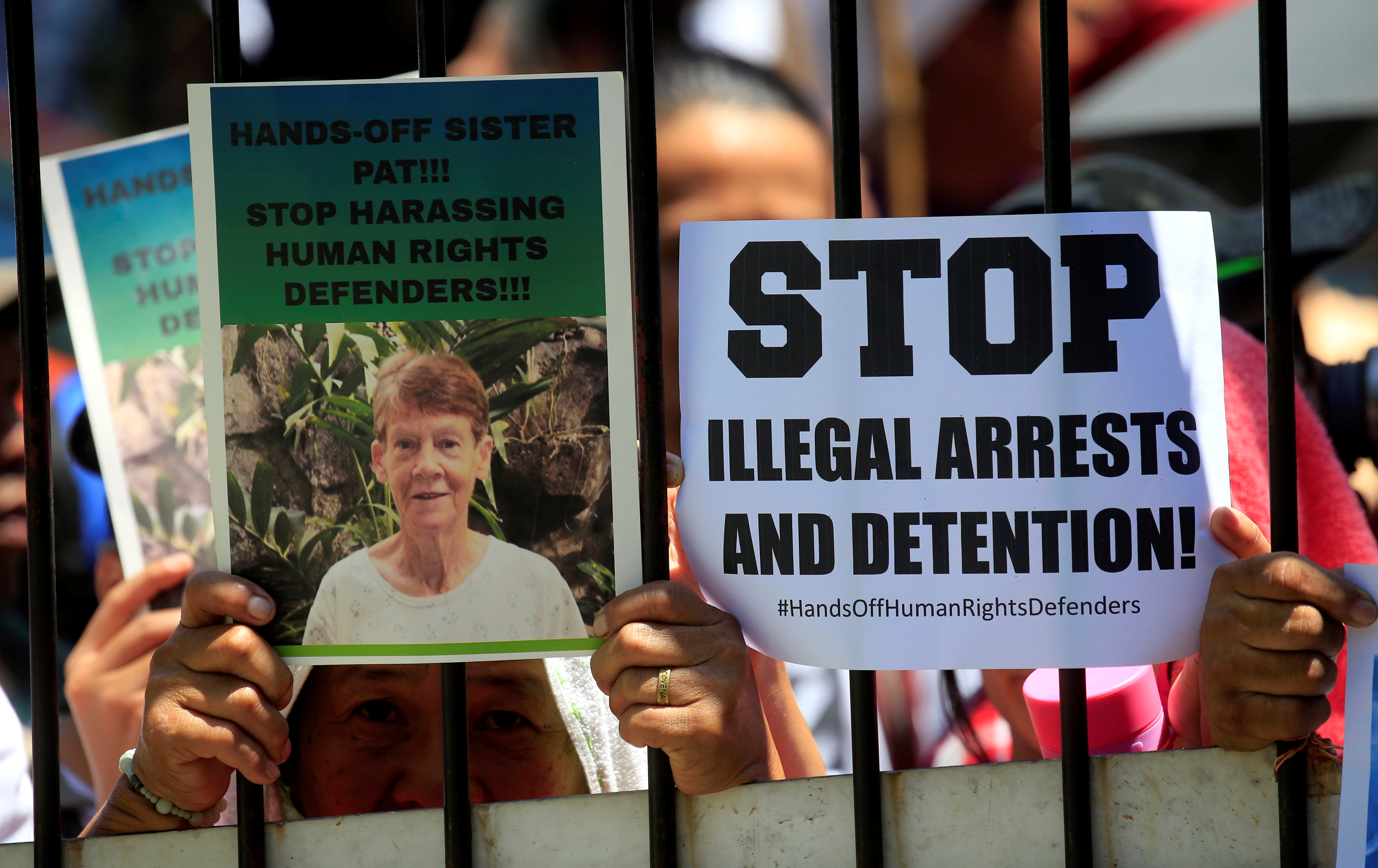 Supporters of Sister Patricia Fox, superior of the Sisters of Our Lady of Sion in the Philippines, hold placards while waiting for her April 17 release from the Bureau of Immigration headquarters in Manila. Philippine authorities arrested the 71-year-old Australian nun for allegedly engaging in illegal political activities. (CNS/Romeo Ranoco, Reuters)

Ucanews.com reported that a statement released by the bureau April 25 said the 71-year-old nun, who was arrested April 16 and detained overnight, had been ordered to leave the country within 30 days for engaging in "activities not allowed under the terms and conditions of her visa."

Immigration Commissioner Jaime Morente said the visa granted to Fox gives her the "privilege to engage in missionary work and not in political activities."

A one-page immigration document dated April 23 ordered the forfeiture of the nun's missionary visa that was due to expire Sept. 5. Fox's alien certificate of registration is also deactivated.

Immigration officials have accused Fox, who has worked in rural communities for 27 years, of being an "undesirable alien" for joining protest rallies and visiting political prisoners.

Immigration spokeswoman Antonette Mangrobang said Fox could still enter and leave the country as a tourist. She also clarified that the decision to revoke the missionary visa was not part of any deportation proceedings.

"(The visa forfeiture) does not mean that she is blacklisted or deported. ... The nun can still apply for another visa or re-enter the country using a tourist permit," Mangrobang told ucanews.com.

Fox, superior of the Sisters of Our Lady of Sion, said she was surprised by the bureau's decision. She said she heard the news via the media because her lawyer had not yet received a copy of the decision.

She told ucanews.com that she and her lawyer would file a motion for reconsideration to challenge the immigration bureau's decision.

"I was not given a chance to answer the accusations against me," she said.

In response to the visa revocation decision, church and human rights activists marched to the immigration bureau's main office in Manila April 25 to protest what they described as "an act of religious persecution."

Good Shepherd Sister Elenita Belardo, national coordinator of the Rural Missionaries of the Philippines, said the Philippine government seems not to understand what it is to be a missionary.

"We are followers of Christ and the mission of Christ is our mission, that is to bring the Good News to the poor, free prisoners, defend the voiceless, and fight injustice," said Belardo.

Retired Bishop Deogracias Iniguez of Kalookan, a member of the Ecumenical Bishops' Forum, called on the faithful to press the government to reverse the immigration bureau's decision.

"It is high time for all Christians with a heart for the poor to come out and stand for what is just and right," he said.