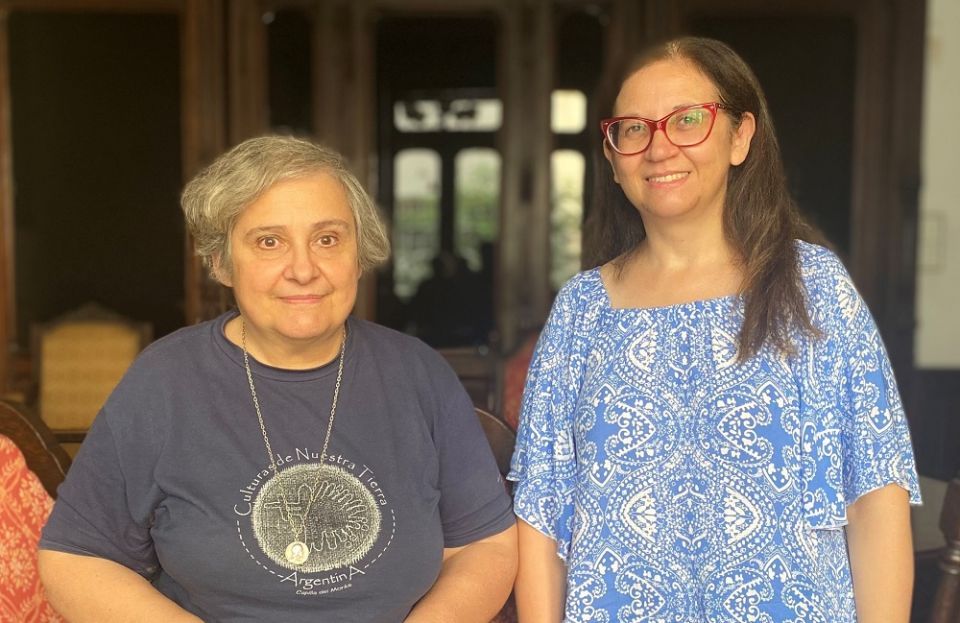 Buenos Aires, Argentina — Eleven years into its formation, the Talitha Kum chapter for Buenos Aires has found its anti-trafficking niche, focusing on awareness-raising and prevention work as its members visit schools for children and adults alike.

The coordinators of Red Kawsay Buenos Aires say ending human trafficking also entails ending the demand for trafficked victims, and to do that, advocates must engage in the long-term work of educating the country's youth and adolescents about human dignity.

Sr. María Laura Roger of the Compañía del Divino Maestro (Company of the Divine Master) and Sandra Mazzanti are the co-coordinators of Red Kawsay, which includes 12 members (three of whom are not sisters, including Mazzanti).

Generally, anti-trafficking includes three different approaches, Roger said: direct assistance to victims, a responsibility they believe would ideally fall to the government; legislative advocacy (they say Argentina is fairly advanced in its laws against trafficking, though they note the importance of ensuring those laws are enforced); and awareness-raising and prevention, the path they chose to pursue.

"Essentially, trafficking exists because there are clients, so we believe that our work aims to change the mentalities of the youth and adults so that a person is never considered merchandise," Mazzanti said. "Rather, they're considered a person with rights who cannot be sold ... This is how we believe society ends trafficking."

As the world observes the International Day of Prayer and Awareness Against Human Trafficking on Feb. 8, Global Sisters Report spoke with Mazzanti and Roger about their efforts to chip away locally at the global phenomenon that is human exploitation.

Mazzanti: In recent years, we've witnessed organizations that have been financed by mafias and other clandestine operations advocating for prostitution to be considered legal work, and lately, these organizations have been influencing the Ministry of Labor.

That's where Red Kawsay came in, joined by other abolitionist organizations that are not related to the church but are fighting human trafficking. Together, we released a written statement or manifesto to make sure that our voices, our opinions, were heard, as well. So, the political advocacy remains important. The legislation may be on our side, but in the day-to-day, there's still a movement that's pushing for the legalization of prostitution — in journalism, in academics, in state organizations. But we know that's not specific to Argentina; it's happening around the world.

GSR: Who are you targeting in your prevention work?

Roger: Naturally, most of our work is in schools. If trafficking is connected to some extracurricular activity or it's related to material that's being taught, they invite us to host workshops.

Before the pandemic, we went to a public school for adults, and our talk fell under the law of Integral Sex Education [ESI], which is applied to all educational institutions. Although ESI is controversial here — a lot can be applied to this initiative — it was wonderful that the director included trafficking in this area. It sparks really interesting conversation because it's a concrete matter; it doesn't stay in the theoretical. A grandmother who was a student asked us: "How do you expect me to talk about this with my grandchildren?" And we tell her, "You're precisely the one who should because it's an act of care to your grandchild."

Mazzanti: With youth and adolescents, we try to get them to be able to detect signs of trafficking and, ideally, share that concrete information with their family. For example, one should dial 145 if you suspect exploitation. We give them those resources and materials and vocabulary to speak about this and share with others on how to be alert and attentive to trafficking and exploiting and knowing what to do next.

How does trafficking manifest in Buenos Aires specifically?

Roger: A lot of people arrive to Buenos Aires from other parts of the country, maybe rural areas, under false promises. Within the city, it's typically in the textiles industry. A lot of times, migrant families are roped into sex trafficking. It's terrible. In Buenos Aires, there's a lot of complicity on the part of official authorities, such as the police — a lot of that.

Mazzanti: People from rural provinces have this idea that coming to the big city will solve their problems.

How prostitution manifests throughout the city depends on the neighborhood and how trafficking has evolved there over time. Around the train station, you'll see women — sometimes they're trans — being prostituted on the streets where there's more crowds. In other neighborhoods, it's more organized, with apartments or hotels being rented out specifically for this, so it's made invisible.

Do the migrants usually come from the same countries, such as neighboring Bolivia or Paraguay?

Mazzanti: Lately, we've been seeing a lot of Venezuelans, many of whom arrive by foot. Bolivians, Paraguayans, many come through the north part of Chile and then into Argentina. There are parts of the border that are known to have less authority controlling the influx, so many know to come through there. Oftentimes, church or trafficking organizations will be close to those entry points to find those who are arriving without passports or documentation, and they will accompany them through their migration proceedings, asking about their journey and what happened to them along the way or what work they came pursuing.

Has Argentina's dramatic recent inflation affected this issue, with desperation or poverty lending itself to trafficking?

Roger: The pandemic was what really complicated the fight against trafficking. People weren't able to leave their homes to work. A large family trapped together in a small house is the recipe for a potential vicious cycle. You can't work, can't interact with others, you have to be mindful of your health. Suddenly, we saw new forms of trafficking and exploitation emerge, such as prostituting from one's own home. It's not just our impression; investigations have confirmed this.

So, the economy and the pandemic go hand in hand. The pandemic affected everything and worsened it. Trafficking is a crime, but it's an ever-mutating crime. There's always a new version to come, such as its increasing online presence. The mafias will always have the funds and resources to keep the business going. It's just a matter of how. This is their income: trafficking humans, drugs, weapons. And trafficking humans is most profitable because you can sell a batch of drugs just once. But a person? You can sell them over and over again.

Mazzanti: We also saw a surge in sugar-daddy type of relationships. Because of the pandemic, these sexting and commercial relationships got super popular. It started to be considered something novel yet normal.

How does trafficking vary depending on the Argentine region?

Roger: In the desert in the country's south, there's a lot of fracking. Large multimillion-dollar companies come in and set up campsites, essentially creating new cities, and prostitution becomes just another mode of entertainment for them the same way a movie theater or casino would be, unfortunately. In that area, men go alone without their families, unlike in other regions, where they bring their families and create a different type of environment.

Mazzanti: In the north, you have labor trafficking of children and adolescents, where they cultivate yerba mate [an Argentine tea] and tobacco. There are some companies of yerba mate that on their package say, "Produced without labor exploitation." Still, many companies there exploit not just locals, but foreigners or people who traveled far to work that land.

Roger: And for centuries, that's been considered normal. So, you really have to work to change the mentality around that.

Mazzanti: With regard to the exploitation of migrant families, such as Bolivians who arrive in Argentina: Oftentimes, they're used to working in rough conditions — spending all day in the scorching sun, not being paid consistently or fairly — so sometimes, this is a cultural issue, because here in Argentina we have laws and norms under the Ministry of Labor. And they don't realize they're being taken advantage of. Bolivians have the reputation of being extremely hard workers who work in any conditions, so we have to accompany and educate them on what standards they should expect for themselves.

What gives you hope?

Roger: At the end of the day, our faith is why we do this work, our belief in human dignity.

Also, knowing that cultures undergo change gives me a lot of hope. We're living in a society where everything is relative and questioned and not accepted passively. Fortunately, that includes any phenomenon that we believe to be harmful. For example, if you tell someone that prostitution is a form of trafficking, they're surprised to hear that, particularly as international institutions try to separate sex work from trafficking. But in a culture where everything is relative and questioned, there's space to make the case that it's wrong.

Mazzanti: As a network, the relationships and connections we've developed with those outside the church is something precious that we need to care for. Knowing we have a lot of overlap in goals and mission and can unite our energy gives me hope.

How has this ministry influenced your spirituality?

Roger: The charism of my congregation, which was founded in 1943, came with the desire for the women in Argentina to have access to theology — and not just the kind that was taught in seminaries, because our foundress always said that Catholic theology needed to incorporate the feminine, the richness that women have to offer, which is why we focus on women. How could I not be affected by women who don't have access to learning theology or women who don't know God and instead are trafficked, reinforcing their idea that they don't have dignity, that they don't have worth? There's an immediate connection for me with my spirituality; it goes straight to Jesus' message of human dignity.

It inspires me, nourishes me, brings out the best in me. This work is now fundamental to my spirituality.

Mazzanti: I used to belong to a missionary congregation and was able to work with women in Africa, though now, I'm no longer consecrated. When I returned to Argentina after working in other countries, I felt a restlessness and a challenge to draw from my experiences and help women however I'm needed.

This commitment to the network, to the women who need our help, has enriched my perspective on human dignity, society, the connection women feel toward one another. It's powerful to be able to share that with sisters.

Q&As | Q & A with the coordinators of Red Kawsay, the Talitha Kum chapter for Buenos Aires