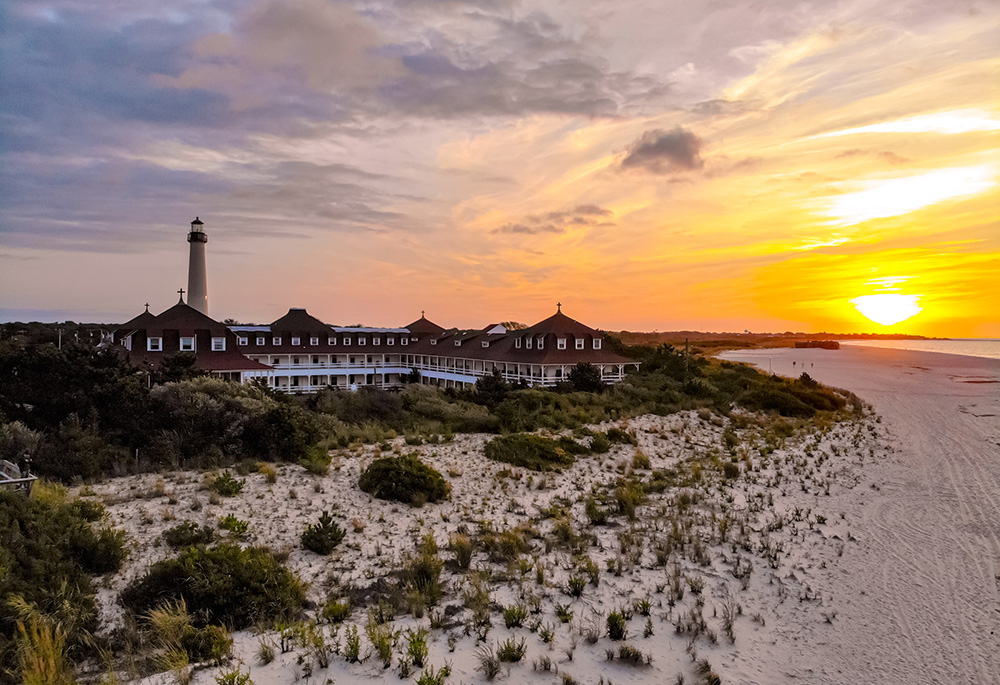 For more than 100 years, the Sisters of St. Joseph of Chestnut Hill, Pennsylvania, owned St. Mary by-the-Sea Retreat House, a 144-room shoreline hotel in Cape May Point, New Jersey, with an unobstructed view of the ocean near a picturesque lighthouse. The sisters used it as a retreat center after they bought it in 1909, and it survived countless storms and even hurricanes.

But the building had been kept in its original condition, which meant no heat or air conditioning and almost no handicap accessibility. And, like the building, the sisters were getting older, and they were no longer able to travel there, safely enjoy it, or keep it going, said Sr. Karen Dietrich, a member of the congregation's general council. Beach erosion had left it in danger of being swept into the sea.

Congregations of sisters are all too familiar with owning campuses filled with massive, obsolete buildings far larger than they need and far more expensive to heat, cool and maintain than they can afford. For every piece of property that a church entity owns, there are legal, financial, architectural, and canonical concerns that must be considered, said David Murphy, program director for the Church Properties Initiative at the University of Notre Dame's Fitzgerald Institute for Real Estate, formed to help the Catholic Church think through real estate concerns.

And with an estimated 177 million acres owned around the world — the church is the largest nongovernmental landowner on Earth — there are an unimaginable number of challenges. But there are just as many opportunities. 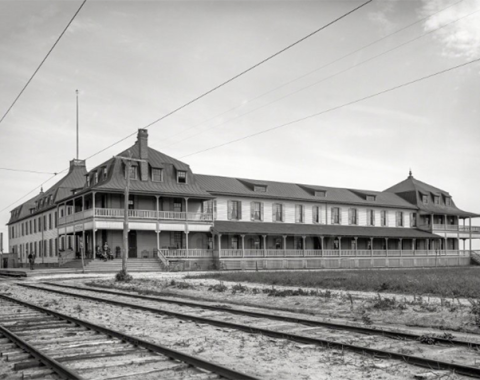 "We've found that we occupy a role where, through researching, we're able to say, 'This is what's possible,' " Murphy said. "The church is so big and so fragmented that organizations are doing the exact same thing, hitting the exact same barriers, and reinventing the wheel in three different places. Sometimes within the same diocese."

The Sisters of St. Joseph of Chestnut Hill in 2016 decided to demolish the retreat house by the sea because of the erosion and return the beach to nature, but that led to calls from laypeople in the diocese to sell the valuable property instead.

After the U.S. Army Corps of Engineers built up the beach so it was protected, the sisters began to search for a way to sell it intact to a buyer that would honor their land ethic but with restrictions that it not be developed. That eventually led to the sale to the newly formed Cape May Point Science Center.

"They intend to create an environmental center that will focus on education, research and advocacy devoted to the conservation, protection, and preservation of nature — a mission wonderfully aligned with the sisters' commitment to the ocean, climate, and marine life," Dietrich wrote in an email. "Being able to save it and let it grow into a new purpose, one so aligned with its past, is indeed a great blessing."

The Church Properties Initiative is a resource to show congregations what might be possible with the buildings they can no longer keep, Murphy said, citing dozens of examples of how convents can be transformed: housing for immigrants or young adult groups, housing for seniors or those with disabilities, affordable housing, short-term housing for religious pilgrims, housing for homeless people, halfway houses for those transitioning out of prison, rehab programs or intentional communities of those considering a vocation.

He has seen properties become community centers, art studios, a school for children with special needs, ecology centers, a laundromat and coffee shops.

"There are maybe hundreds of examples of coffee shops, and they're usually coupled with programs for adults with disabilities or guys coming out of prison," Murphy said.

And being an already-owned church property changes the economics dramatically.

"You take away the cost of renting a storefront in downtown Chicago, and you can actually make a substantial chunk of change," he said. "There's no property taxes, no rent because the church already owns it, and any secular person can appreciate the good that it's doing." 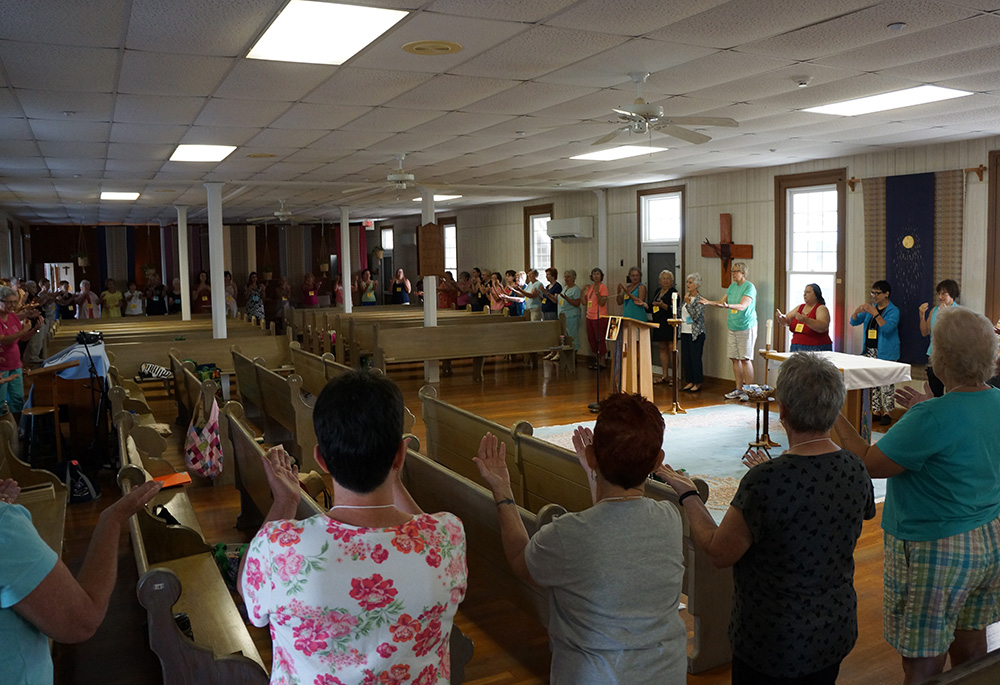 Women pray as part of a 2016 retreat at St. Mary by-the-Sea Retreat House in Cape May Point, New Jersey. (Courtesy of the Sisters of St. Joseph of Chestnut Hill)

What counts as church property, anyway?

When it comes to sisters and their property, what appears to be a most basic question — what do you own? — can be a stumbling block.

Murphy said a congregation of women religious may discover their motherhouse is held in the name of a mother superior who died more than a century ago or in the name of the person who donated the land. Or perhaps a community owned land and buildings its members didn't even know about.

"The church became this accidental, huge landowner," he said. "Someone dies, and their kids donate the house to the church because Mom was so devoted, and then what?"

And what, exactly, constitutes "church property"? Outsiders may see the Catholic Church as a monolithic entity, but that is far from the case. 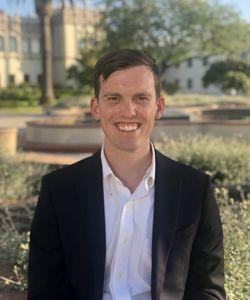 For example, while the Sisters of St. Joseph of Chestnut Hill considered demolishing their retreat center, the Archdiocese of Philadelphia was trying to raise money.

"You had people asking, 'Why is the diocese doing a capital campaign when you could sell this land?' " Murphy said. "And you have to explain that the diocese is not the Sisters of St. Joseph or the Jesuits or anyone else."

Even when organizational divisions within the church are understood, Murphy said, there's not a simple definition of "church property."

"Do you count something owned by the Knights of Columbus or a hospital that still has nuns on the board but is its own LLC?" he said. "In the Diocese of Fort Wayne-South Bend [in Indiana] alone, there are six Catholic universities and colleges. Are those considered church property? What about the cemeteries?"

The University of Notre Dame is run by the Holy Cross order of priests, but the university itself owns the iconic football stadium, not the congregation. So if you're cataloging church property, which are included?

GoodLands, a nonprofit based in New Haven, Connecticut, has wrestled with this question as it attempts to catalog and create a digital map of all church property in the world.

The digital maps can be combined with other data to show, for example, what properties will be at risk from sea level rise or where sisters are most concentrated. Murphy said it could be used to ensure a school building that a congregation is considering selling to a charter school won't become a school that will poach students from another Catholic school nearby. 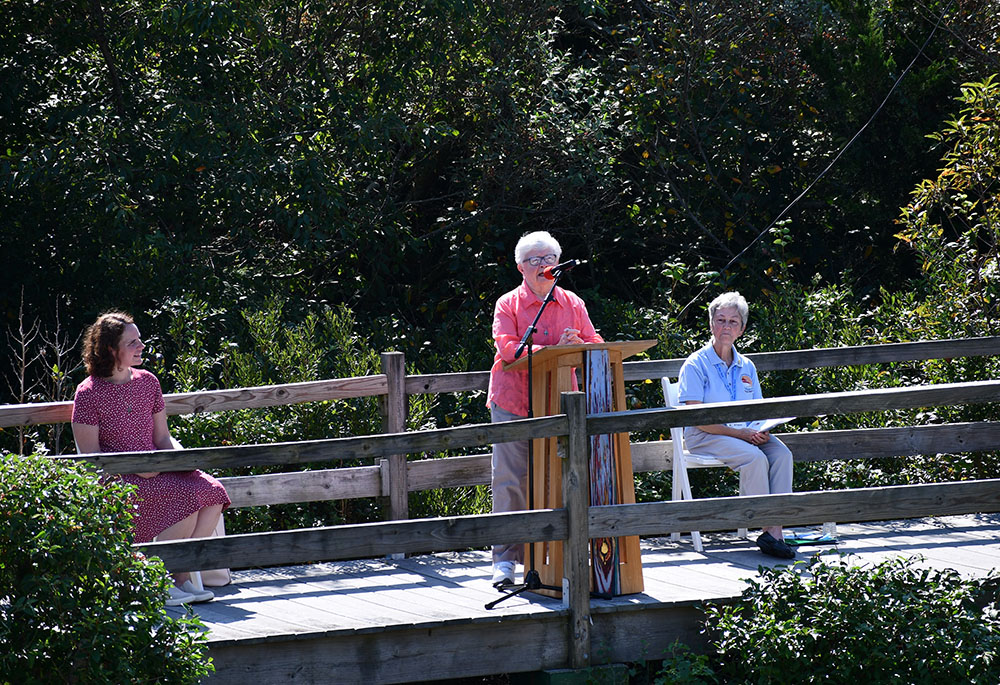 'We will do everything we can to help'

Congregations in Canada already have a place to turn to with capital questions: The Canadian Religious Stewardship, which helps with strategic and long-term planning and can help congregations prepare for completion. The stewardship began as a nonprofit in 2008 and gained canonical status — the first public juridic person of its type in the world — in 2010.

In addition to help with buildings and property, the stewardship can also offer the 230 religious congregations in Canada governance, human resources management, and expertise in finance, health care, investments, communications, operations, administration, and canon and civil law.

In general, the stewardship does not purchase and repurpose properties and buildings, but it has created and runs Presentation Manor in Toronto, which has 170 independent-living units, 46 assisted-living units, and 13 memory care beds open to religious from any congregation in Canada. Currently, the facility is about half religious, half lay.

"Eighty percent of my time is spent sitting with leadership or communities, figuring out what is the best option for them, selecting options, figuring out a plan," Weatherall said. "We won't assume responsibility for [congregational property], but we will do everything we can to help you find a solution," such as finding a nonprofit that can use it and has a mission that matches the order's charism.

Murphy said Notre Dame's Church Properties Initiative will be a home for academic research, such as how the closure of Catholic schools triggers an increase in crime and other community problems, and practical research, such as things to consider when selling property.

For example, "sometimes, the church sees these properties as an albatross around their neck, but if you had spent $5,000 to change the zoning before listing it, you might have made 10 times more on the sale price," he said. 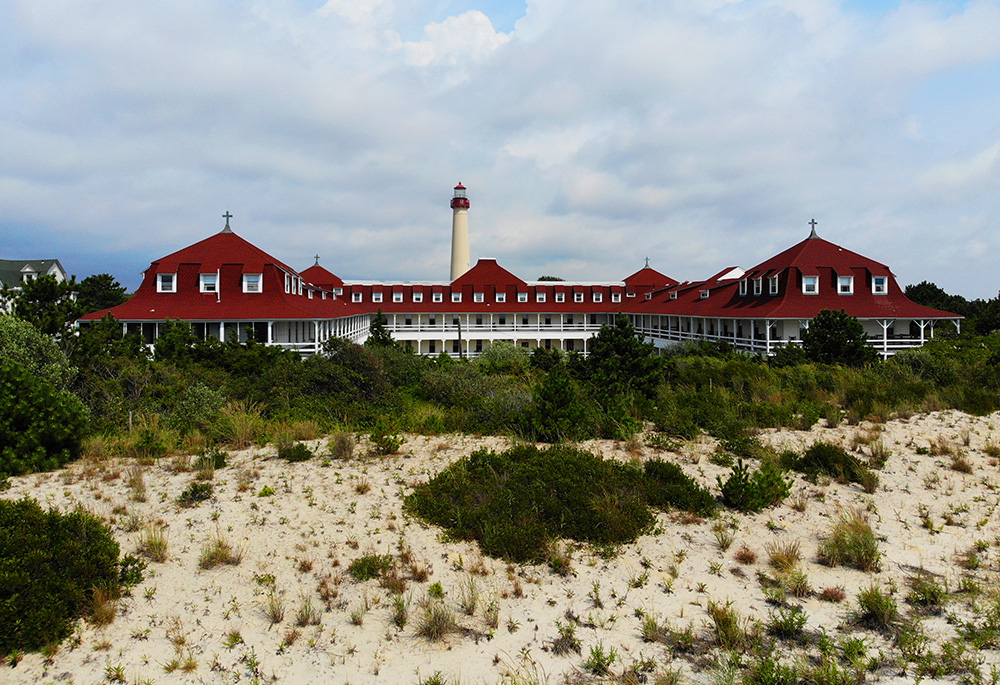 The initiative is working to build a database of projects and case studies so congregations and dioceses can see what the possibilities are for their properties, such as how the Wheaton Franciscans were able to utilize their rooftops for a solar array, reducing their electric costs at no expense to themselves.

Murphy said the biggest problem is that any church entity in the United States that has questions about property has no central place to turn for answers.

"There's a real mismatch between church leadership who may be experts in theology and have no experience whatsoever in real estate," he said. "But the church is huge, and there's no reason we can't be learning from ourselves. ... It's a huge problem, and it's not just local. It's an all-hands-on-deck Catholic problem."